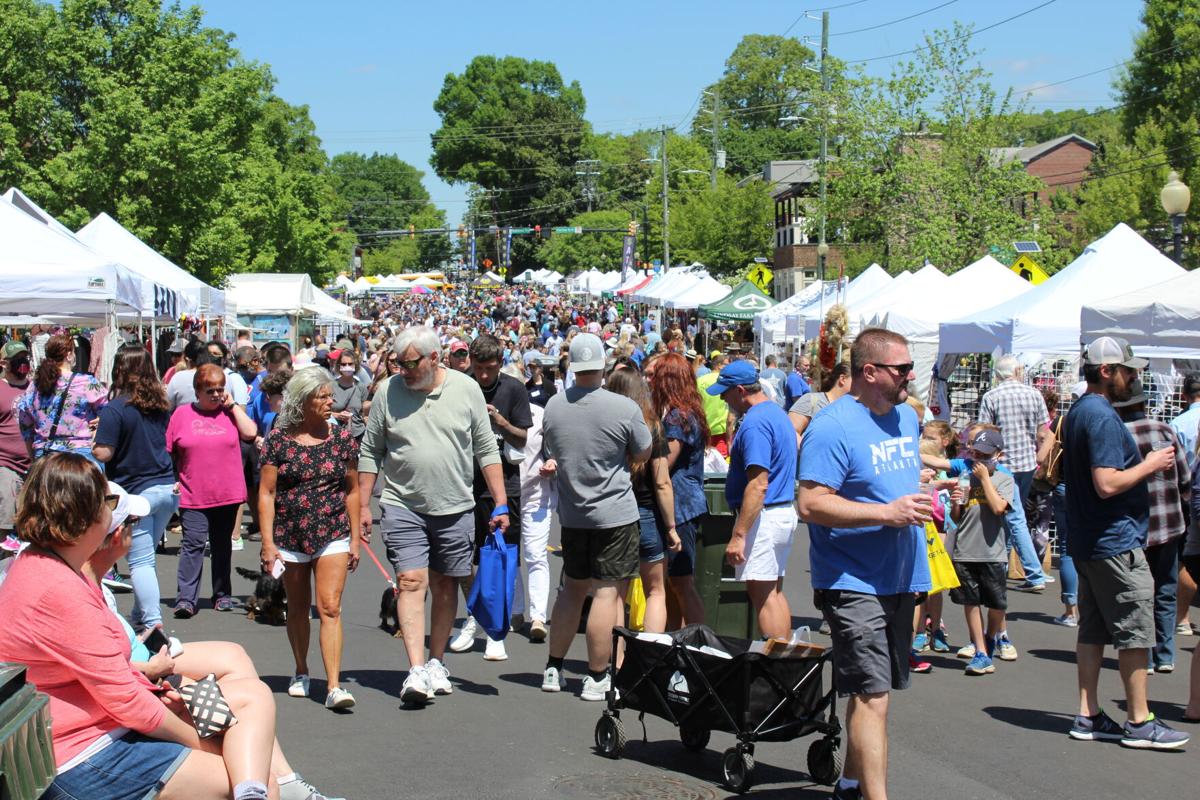 Thousands of people flocked to downtown Kennesaw on Saturday and Sunday to attend the Big Shanty festival, one of Cobb’s first large, public gatherings since the start of the pandemic. The outdoor festival featured more than 175 booths, including arts and crafts, food vendors, merchants and live entertainment. 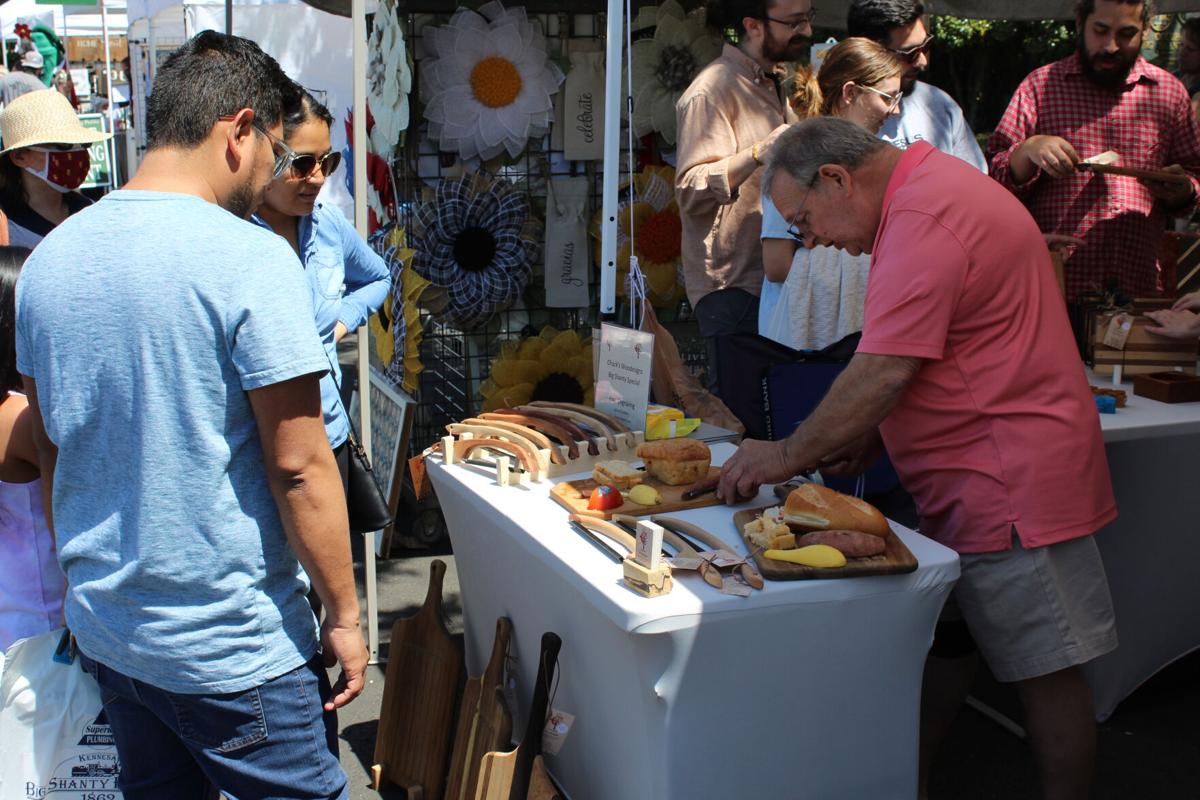 A man demonstrates a cutting board at a booth selling carved wood items at the Big Shanty Festival.

Thousands of people flocked to downtown Kennesaw on Saturday and Sunday to attend the Big Shanty festival, one of Cobb’s first large, public gatherings since the start of the pandemic. The outdoor festival featured more than 175 booths, including arts and crafts, food vendors, merchants and live entertainment.

A man demonstrates a cutting board at a booth selling carved wood items at the Big Shanty Festival.

Over the weekend, downtown Kennesaw had something that would have been unthinkable a year ago — thousands of people packed the streets to attend the annual Big Shanty Festival.

Streets were blocked off as more than 175 vendors hawked food, art, gifts, entertainment and more. People young and old, some of them masked, perused the booths, chowed down and enjoyed live singing and dancing.

On the last day of March, Gov. Brian Kemp signed an executive order eliminating the ban on large gatherings, effective April 8. Approximately 19.1% of Georgians are fully vaccinated, and 32.4% have received at least one dose, according to the Centers for Disease Control and Prevention.

Holly Quinlan, president and CEO of Cobb Travel and Tourism, said the warmer months should give residents the opportunity to “get out and enjoy the many unique and charming traits within each city and throughout the county,” as well as hasten the economic recovery for restaraunts, attractions and hotels.

“After such a challenging year, we are excited to see festivals and events returning to our community,” she said. “Tourism is a significant economic driver for Cobb County, and the return of events is a positive sign as the hospitality industry looks toward recovery.”

With the state returning to some sense of normalcy, below is a list of other Cobb festivals planned for this year.

Smoke on the Lake BBQ FestivalWHAT: The North Cobb Rotary Club, city of Acworth and the Georgia Barbecue Association partner annually to host the Smoke on the Lake BBQ Festival. Teams from across the Southeast compete in professional and amateur divisions for various cash prizes. Participants can purchase tasting tickets and serve as judges for best wings and taste different vendors’ offerings. The night of Friday, May 7 will feature an outdoor concert from the Georgia Players Guild featuring music from Three Dog Night and Hall and Oates. Table reservations will be available and will include six chairs. All proceeds are distributed amongst local charities.

WHERE: Logan Farm Park in Acworth

Bringing the Sea to the Springs FestivalWHAT: The city of Powder Springs will host its inaugural Bringing the Sea to the Springs festival in May. The free festival will feature fresh seafood along with live music and arts & crafts for sale. The festival will be centered around Thurman Springs Park. A ribbon-cutting ceremony will feature Mayor Al Thurman — for whom the park was named — along with the Powder Springs City Council and other officials on May 14 at 5 p.m. It will be followed by a butterfly release to open the festival. The headlining performer on May 14 is Otis Redding III, son of legendary singer Otis Redding.

The May 15 featured performer will be drummer Sonny Emory, formerly of Earth, Wind & Fire. Playing May 14-15 prior to the headliners will be The Gold Standard Band. Additional acts are listed on the event website.

Marietta 4th of July CelebrationWHAT: The city of Marietta plans to host its 4th in the Park Celebration this summer, featuring a parade, free live concerts, museum tours, an arts and crafts show, carnival games and a fireworks finale. In the past, the parade has included 110 entries, 2,000 participants and an estimated 30,000 spectators. The parade will start at Roswell Street Baptist Church and travel west on Roswell, north on East Park Square past Glover Park, down Cherokee Street and will end at North Marietta Parkway. The end of the parade marks the start of the festival.

Entries include marching units from the city of Marietta, civic organizations, beauty queens, scouts and local businesses. The deadline to apply is May 28 at 5 p.m.

COST: Free, though concert tables can be reserved for $80 or $100 for 6-top and 8-top tables, respectively.

ChalktoberfestWHAT: Chalktoberfest, presented by the Marietta Cobb Museum of Art, is an annual weekend event of chalk art displays, craft beer and live music that brings nearly 100,000 people to Marietta Square. According to Sally Macaulay, executive director of the museum, they will be using only U.S. artists this year to ease back into the festival during the pandemic. Over the years, the museum has welcomed between 100 and 120 artists to Chalktoberfest, including international artists from Mexico, Italy, Ukraine, Argentina and elsewhere.

COST: Free to attend. All proceeds go to the Marietta Cobb Museum of Art.

COST: Free to attend, vendors charge for “tastes” of food in the $1-5 range.

WHAT: According to JRM Management Services, Smyrna has canceled its Spring Jonquil Festival, which would have taken place in late April when the city’s official symbol, a species of daffodil, comes into bloom. The Fall Jonquil Festival, however is still on. It will occur at the Village Green in downtown Smyrna. The festival typically plays host to 150+ arts and crafts booths, along with food vendors and children’s activities. There will be a local entertainment stage, too. Crowds are in the range of about 20,000.