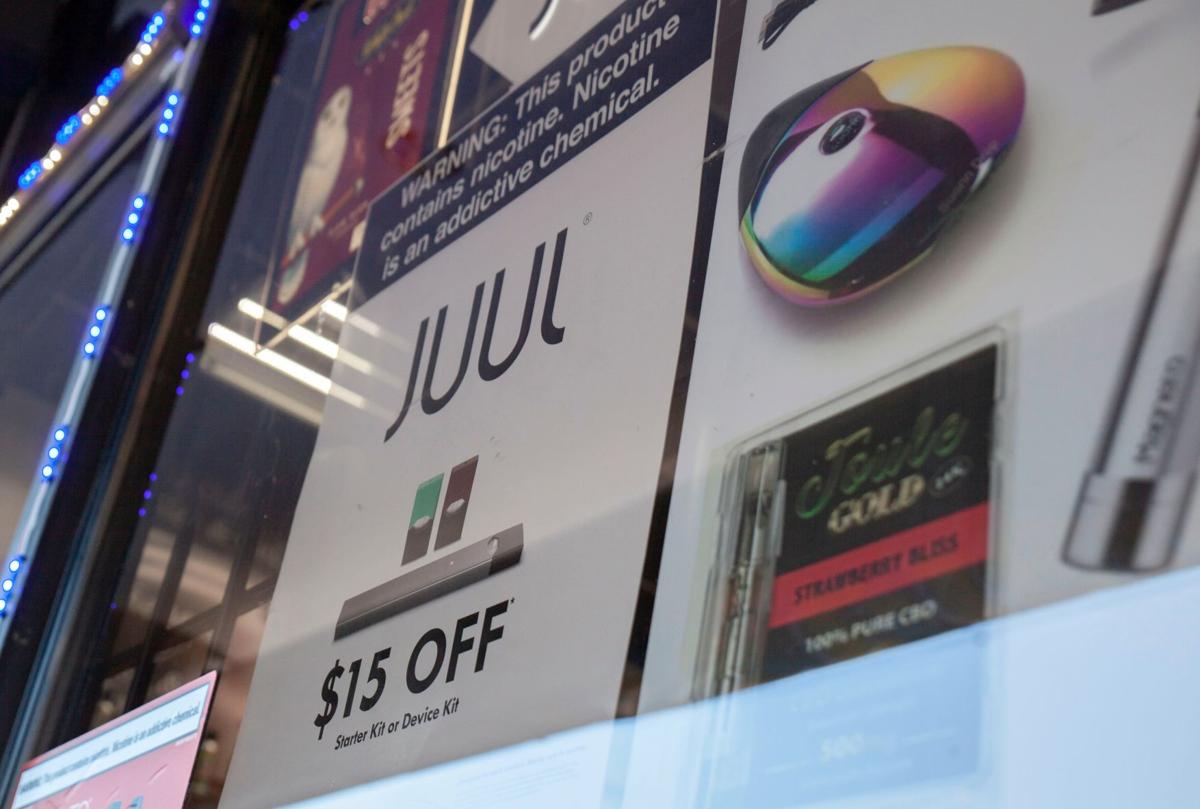 A display at Discount Smoke & Vape in Marietta shows JUULs for sale. 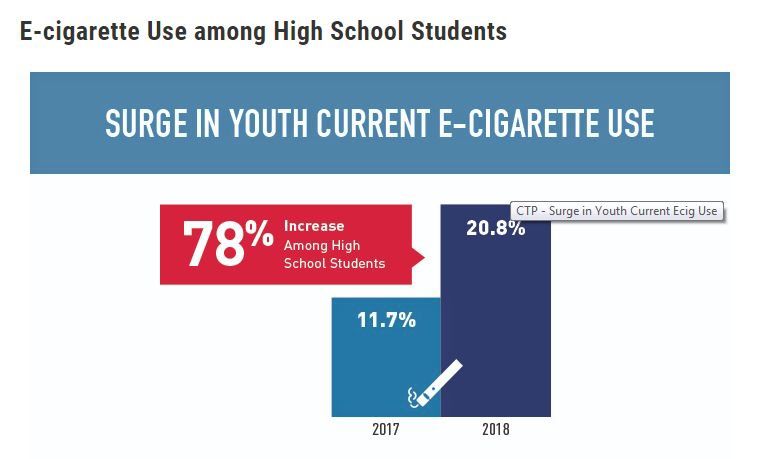 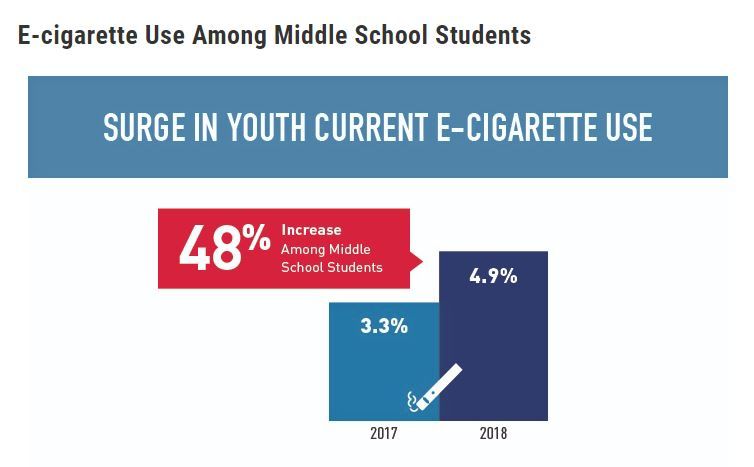 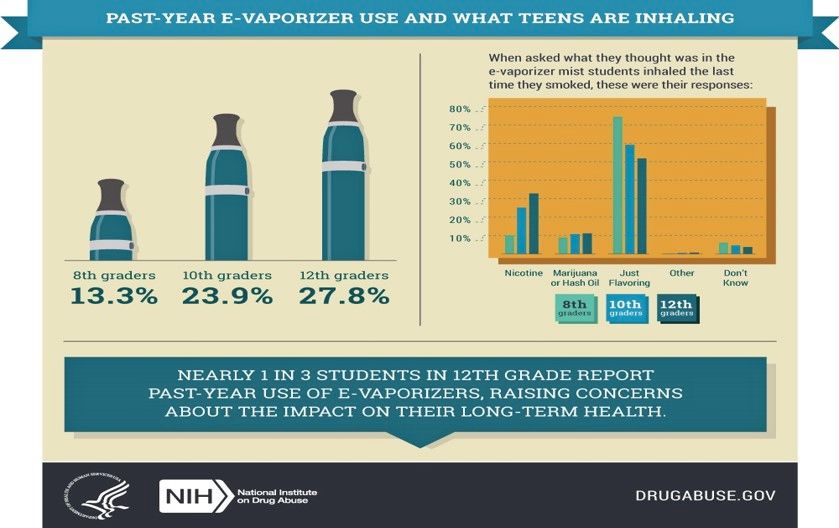 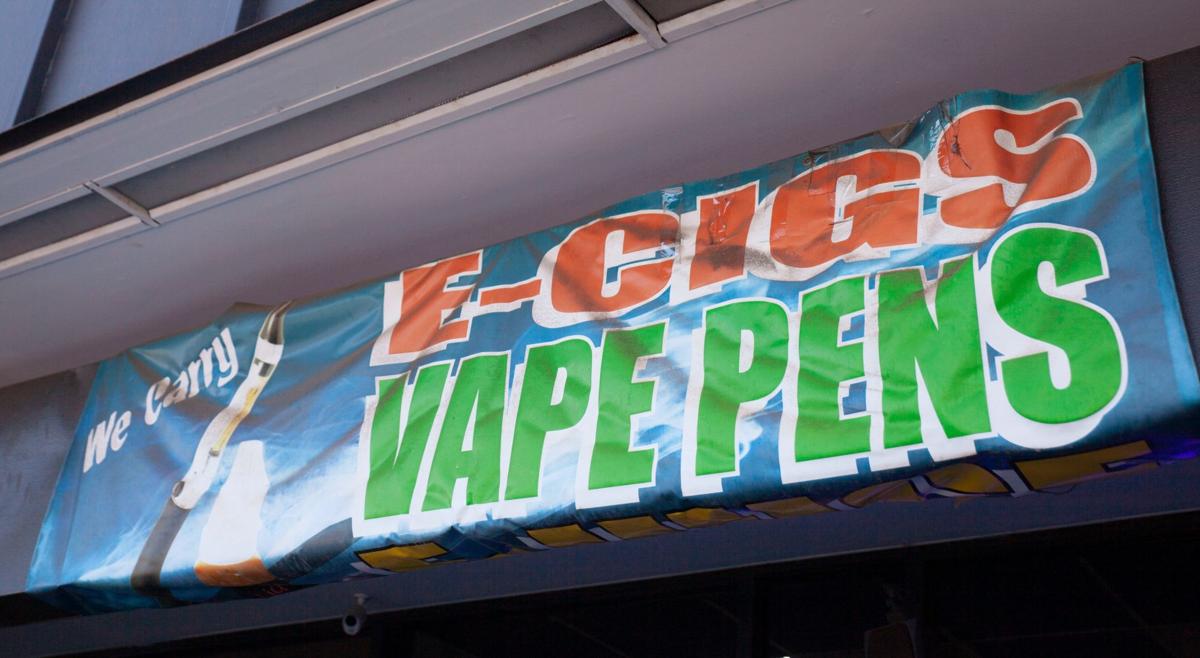 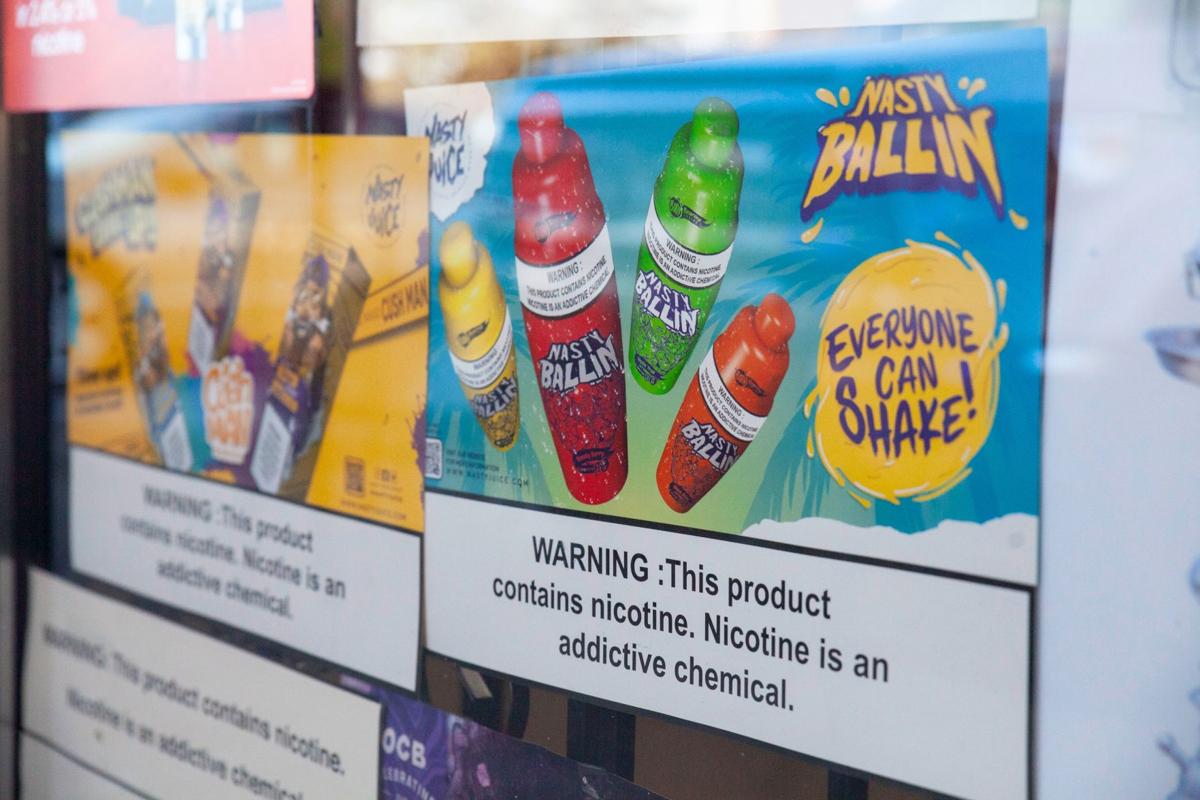 +6
Don't miss a story.
Get local news delivered to your inbox.

A display at Discount Smoke & Vape in Marietta shows JUULs for sale.

Amid a nearly 80% increase in teen vaping and in the wake of the first U.S. death potentially linked to electronic cigarettes, health officials in Cobb and across the state are urging teens and young adults to think before they try the products.

E-cigarettes, which use a heat source inside the device to vaporize nicotine and flavored juices for the user to breathe in, have become a popular alternative to regular cigarettes in recent years, with companies claiming the vapors are a safe bridge to kicking the smoking habit, according to Jazmyn McCloud, planning and policy specialist for Cobb & Douglas Public Health.

The products hit shelves in the mid-2000s, but popularity has surged in the past few years, she said.

McCloud, who oversees the department’s asthma, tobacco and adolescent health and youth development, said while medical professionals are still learning what long-term effects the vapors are having on users, the recent reports of health complications are not encouraging.

“There is a lot unknown about this product. We know it’s not a proven FDA method to help people who may smoke to quit,” she said. “Unfortunately, there have been — from the last count that I saw from the CDC — I believe over 215 cases of a severe pulmonary illness in patients that all ... have been utilizing vaping products.”

McCloud also said it’s not yet clear if a specific ingredient in vape products are causing the illnesses, but both state and federal agencies say that many of the affected e-cigarette users reported using cannabinoid products, such as tetrahydrocannabinol, or THC, in their devices.

The Centers for Disease Control and Prevention reports that as of Aug. 27 the more than 200 cases of “severe pulmonary disease” associated with the use of electronic cigarette products have come from 25 states and the illnesses are under investigation.

“Additional reports of pulmonary illness are being investigated by states to determine whether those illnesses are related to e-cigarette product use. These numbers are likely to change over time,” the CDC’s website states.

The Illinois Department of Public Health reported late last month that a person who recently vaped died after being hospitalized with “severe respiratory illness.” The death could be the first in the U.S. related to vaping, an agency spokesperson said in the news release.

The symptoms of vaping-related illnesses, as reported by the Georgia Department of Public Health, include cough, shortness of breath, fatigue, chest pain, nausea, vomiting and diarrhea. The public health department also reports that the symptoms tend to worsen over time.

“Multiple states have reported similar cases requiring hospitalization and patients being placed on ventilators,” an August news release from the Georgia Department of Public Health states. “E-cigarettes and other vaping devices are not safe for youth, young adults, pregnant women or adults who do not currently use tobacco products. ... Use of these products can increase the possibility of addiction and long-term harm to brain development and respiratory health.”

Laura Searcy works for the nonprofit Cobb Community Alliance to Prevent Substance Abuse and serves as the expert voice on tobacco and tobacco policy for other health entities. Searcy, a pediatric nurse practitioner for Marietta Neonatology at WellStar Kennestone Hospital, said she has followed the e-cigarette trend since 2014.

Beyond the obvious respiratory concerns, she said, are very real dangers of stunted brain development in youth. Nicotine is highly addictive, Searcy said, and popular e-cigarette brands like JUUL, provide users with extreme doses of the drug.

In some devices, Searcy said the nicotine in one 200-puff cartridge equates to up to four packs of cigarettes.

“Kids get addicted to nicotine and other drugs more easily and more quickly than adults would because of their immature brains,” she said, adding that many teens don’t know what’s in their vape cartridges. “We’re finding kids who find themselves nicotine-dependent — they can’t get through a school day, they can’t get through a night without vaping — when they never realized they were using nicotine.”

And because vaping has become a social phenomenon, Searcy said, there are no signs of slowing.

Increased use erases reduction in smoking

The National Youth Tobacco Survey, conducted annually by the U.S. Food & Drug Administration and the CDC, shows that from 2017 to 2018, use among students nationwide increased by 78%, or 1.5 million students. In middle school students, that increase came to 48%.

And while e-cigarette products have been hailed as a way to quit tobacco by vape companies, the survey also showed a 38% increase of tobacco use among high school students and 29% among middle school students between the same years.

Both Searcy and McCloud said these increases mean efforts to eradicate tobacco use in the country have been reversed. Prior to e-cigarettes, tobacco use in the nation had dropped to around 15%, and below 10% among youth, according to Searcy.

“With e-cigarettes, it seems as though we have a booming generation of smokers that could potentially occur if prevention efforts don’t ramp up,” McCloud said, adding that 36% of high school seniors in the state report using e-cigarettes.

A large part of the increased use of vape products among youth, McCloud said, likely has to do with the marketing of the products. Mass production of fruit-flavored e-juices paired with false claims by companies that the vapors were harmless, as well as companies creating social media accounts for their products have targeted and intrigued teens, she said.

Between 2017 and 2018 and among high school students who currently used e-cigarettes, use of flavored e-cigarettes increased from 60.9% to 67.8%, according to the FDA.

“They have encouraged, indirectly and directly, young people to start utilizing their products,” McCloud said. “These companies are saying that they’re not trying to target youth and young adults, but we’ve seen otherwise.”

Increase in teen use of ‘great concern’

After hearing the statistics, Grant Rivera, superintendent of Marietta City Schools, said, “My heart sank.” But, he added, he doesn’t doubt them.

“Obviously, that was of great concern for me, not only for their health but also for the safety of the campus,” he said. “I feel like we’ve addressed the issue, to some degree, on campus.”

But in light of the numbers, Rivera continued, the district might need to take steps to better educate students from a younger age.

“If that survey is correct, there are a lot of kids who some point in the day are doing something that long term is very harmful,” he said. “My hope is that, as some of these very shocking medical stories come out ... we’re going to start to get kids’ attention.”

He added that district policy dictates students who are found vaping or with vape products on campus would generally receive a three-day suspension from school.

In Cobb, school board member Randy Scamihorn said the board has not received any reports of students vaping or having adverse reactions to vaping. But, he said, based on the recent media reports on the topic, it’s an issue the school district should be aware of.

“Because of the national attention and the deaths, it’s an item that we need to be looking into and making sure that we’re on top of and ahead of it,” Scamihorn said, adding that his comments aren’t necessarily a reflection of the school board’s opinion.

“Most e-cigarettes contain nicotine which is highly addictive and harmful to youth brain development,” said Patti Agatston of the Cobb Schools Prevention and Intervention Center. “In addition vaping has been linked to lung disease among teens and young adults, which may be due to contaminants in the inhaled vapors or allergic reactions to them.”

The bottom line for teens thinking of using e-cigarettes and similar products, Searcy said, is that e-cigarettes are not a status symbol, and they are not harmless. Her advice is simple: If you haven’t started vaping, don’t start.

— The Associated Press contributed to reporting for this story.

Smyrna is believed to be the first jurisdiction in Georgia to raise the legal age of purchasing, selling, using or possessing tobacco products…

Nicotine’Vaping has been going on for ten years and all of a sudden there is this issue which in 80 percent of cases apparently was THC. The rest probably won’t admit it. The good news is many former cigarette smokers moved to vape which is much much safer. Let’s not oppose something because of misinformation