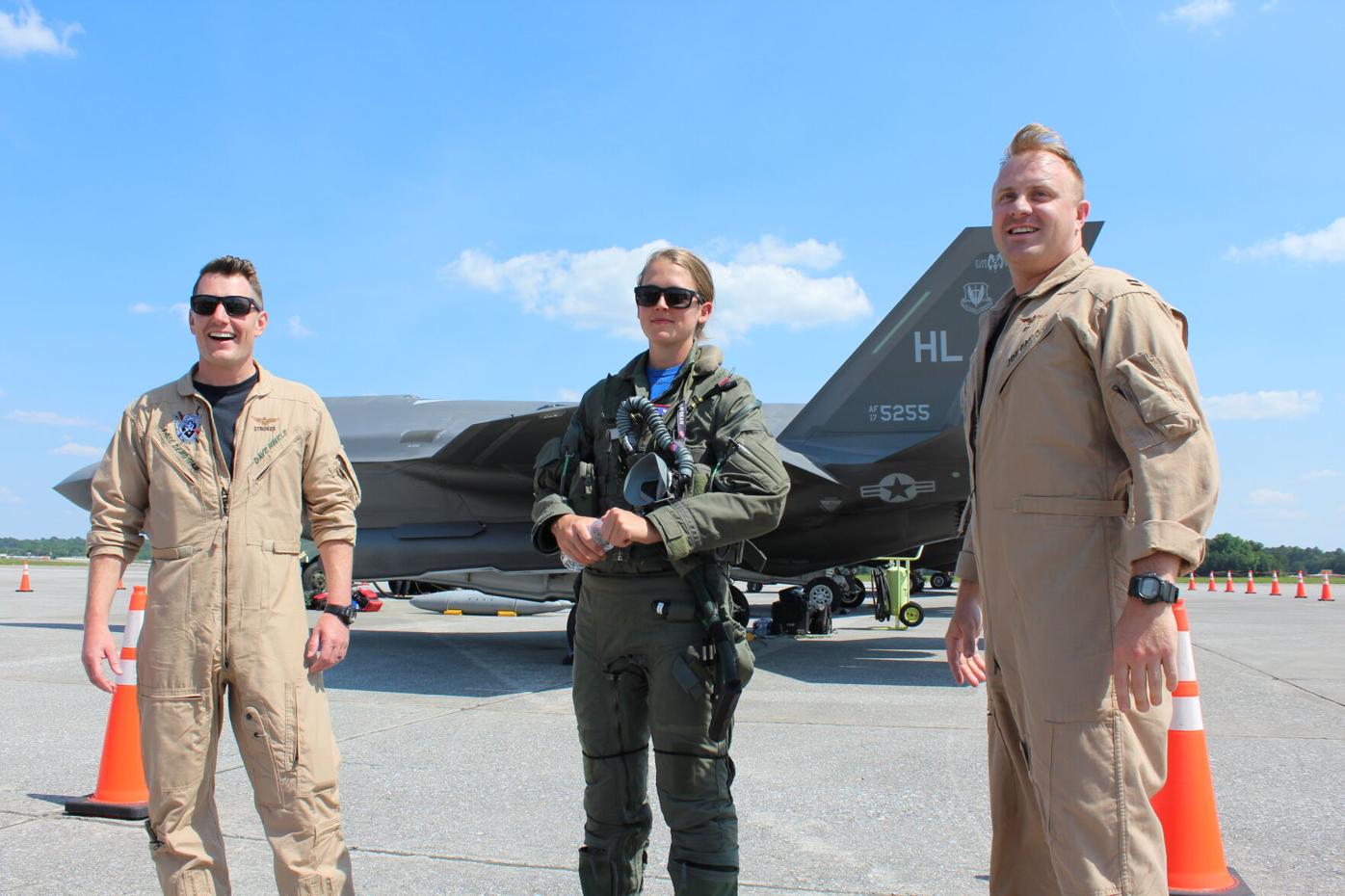 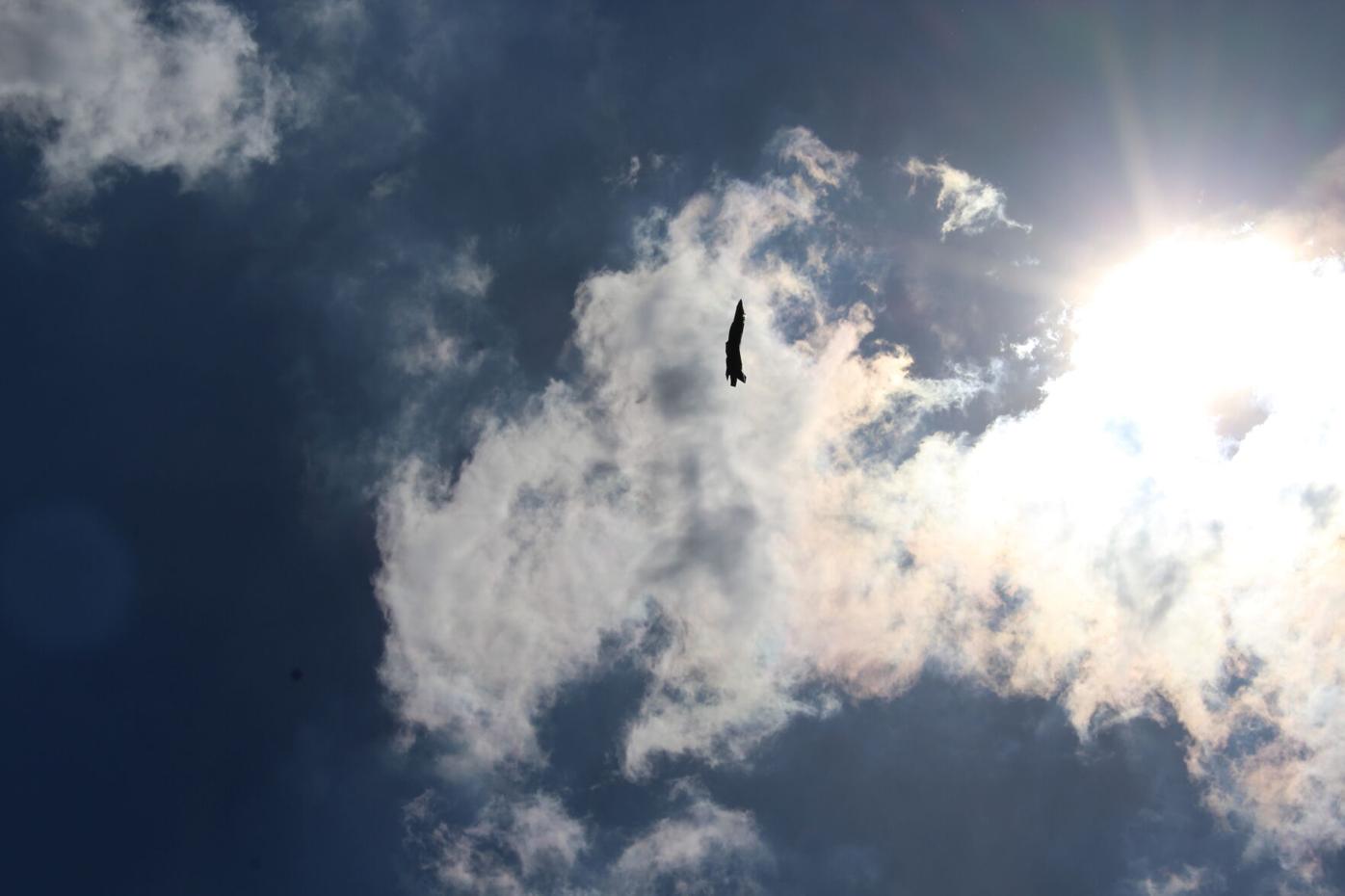 Air Force pilot Maj. Kristin Wolfe’s F-35 fighter is silhouetted in the clouds over Dobbins Air Reserve Base on Friday. 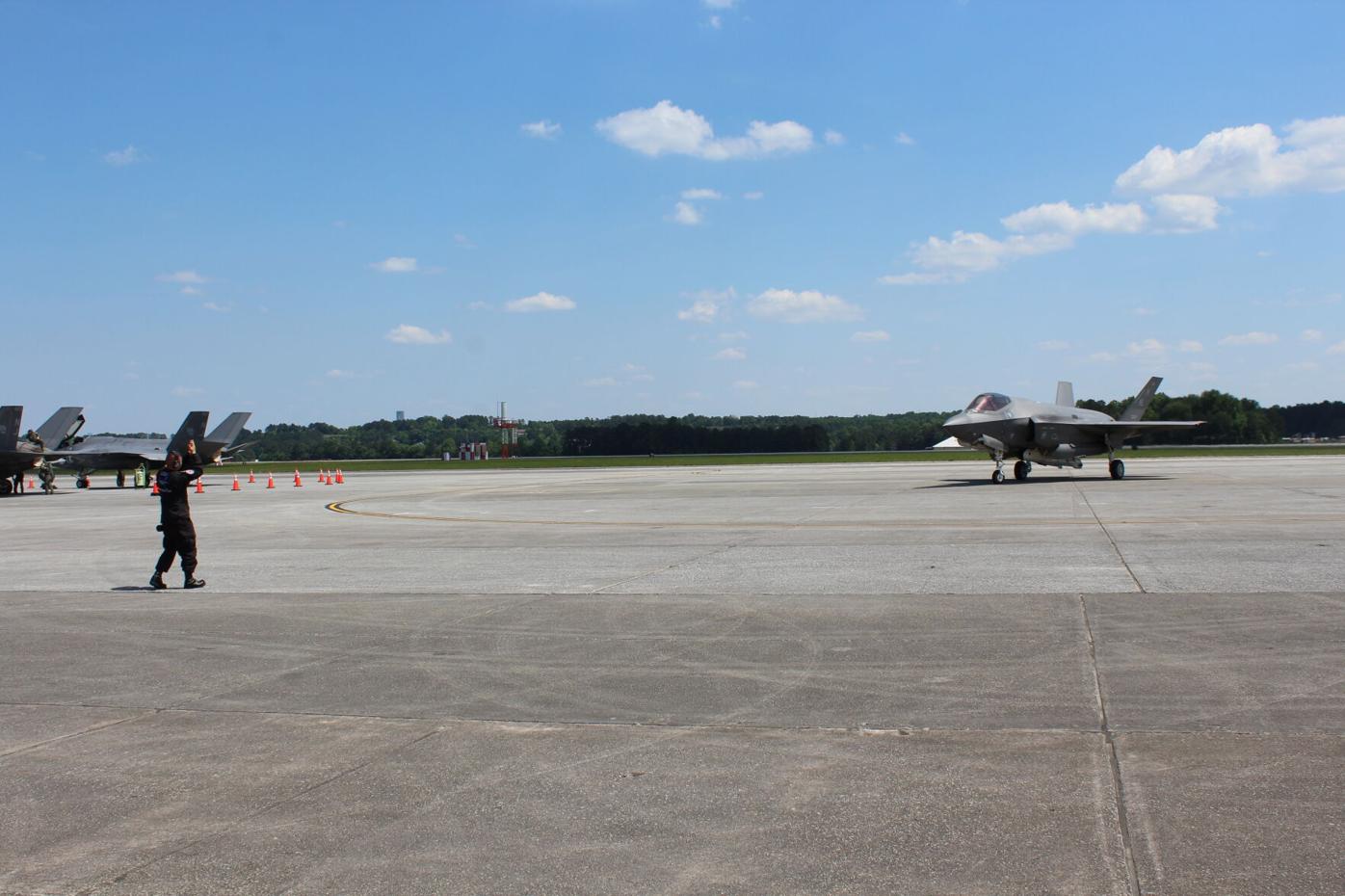 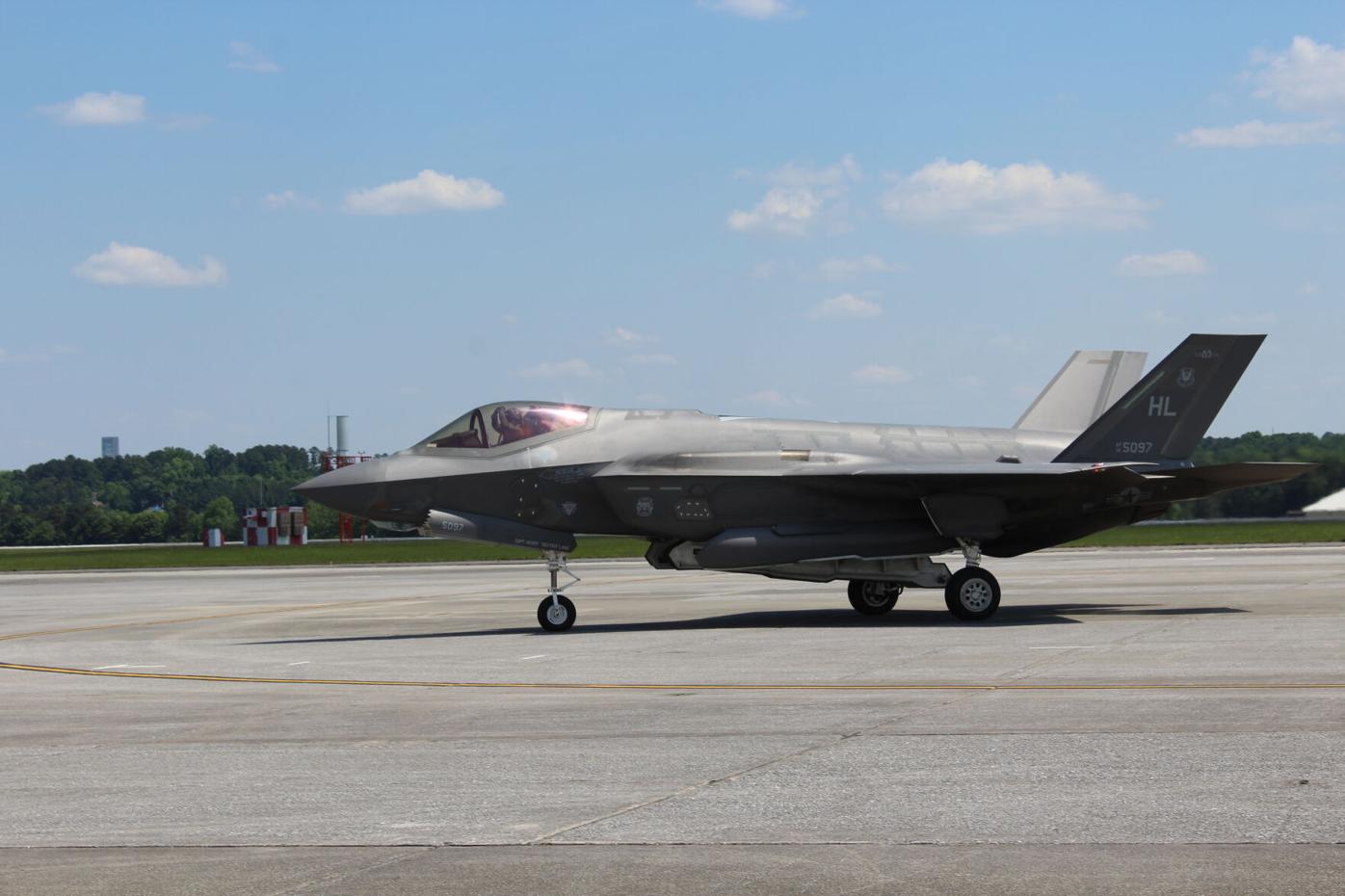 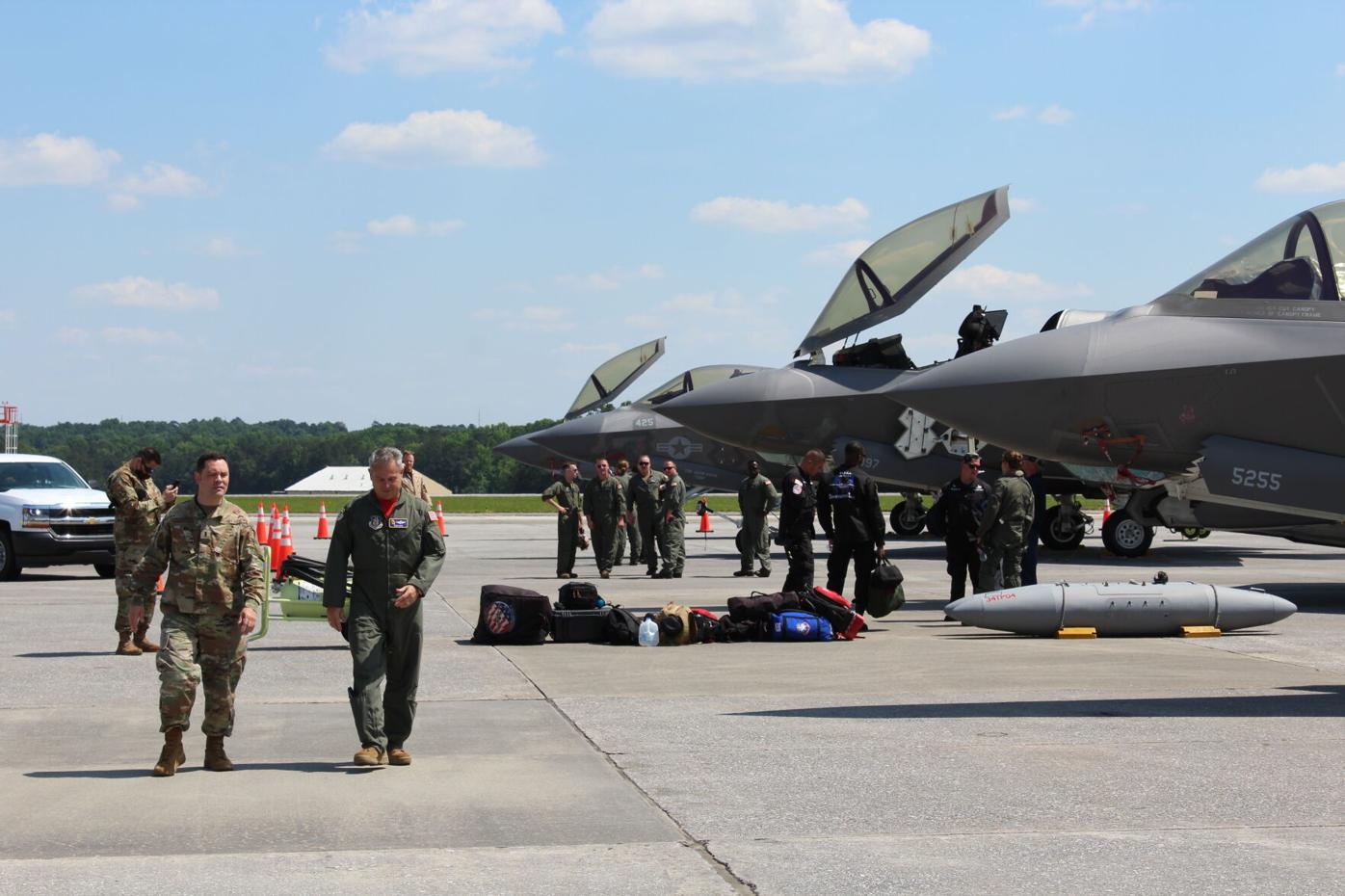 F-35 jets parked on the tarmac at Dobbins Air Reserve Base. 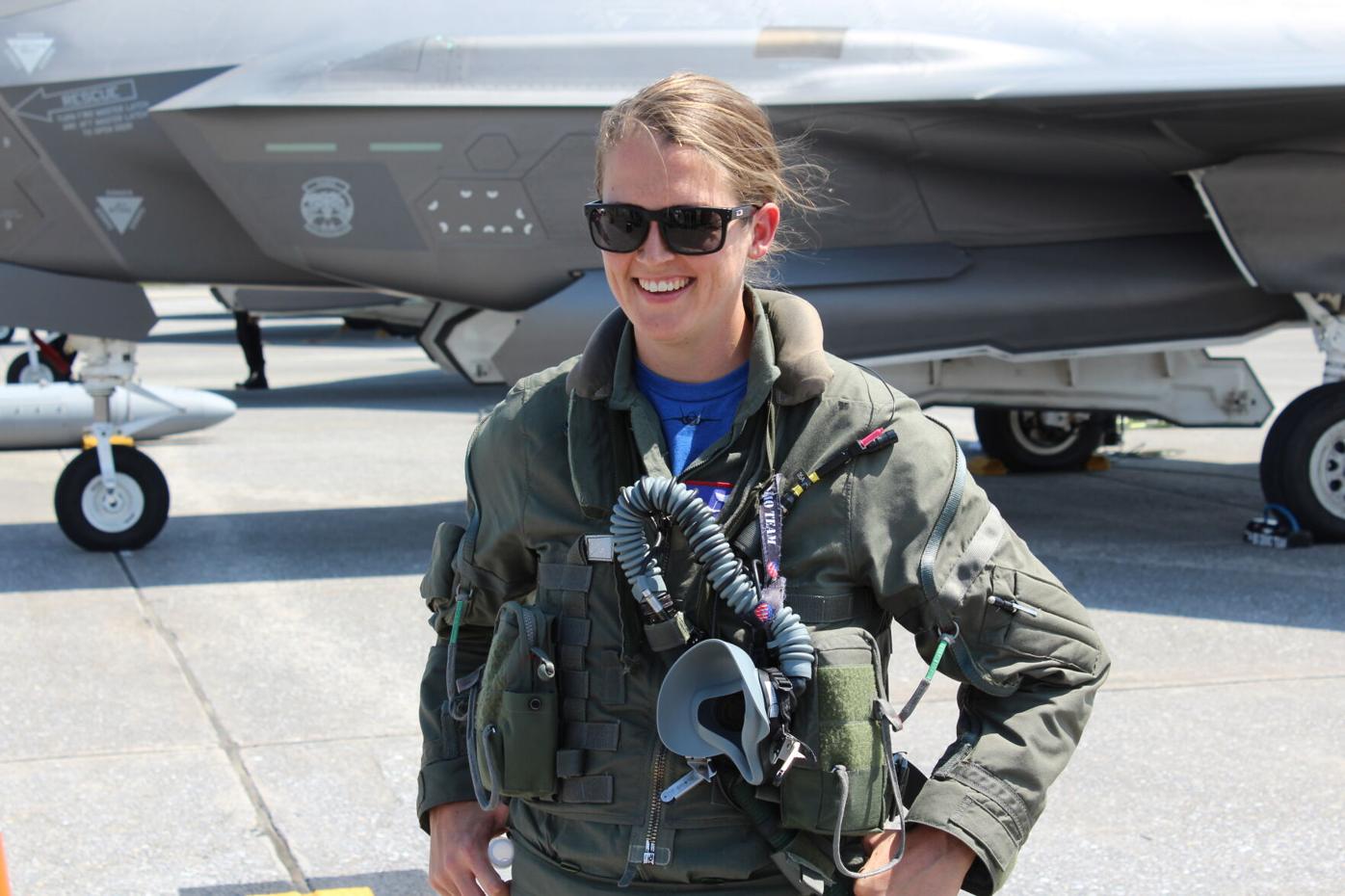 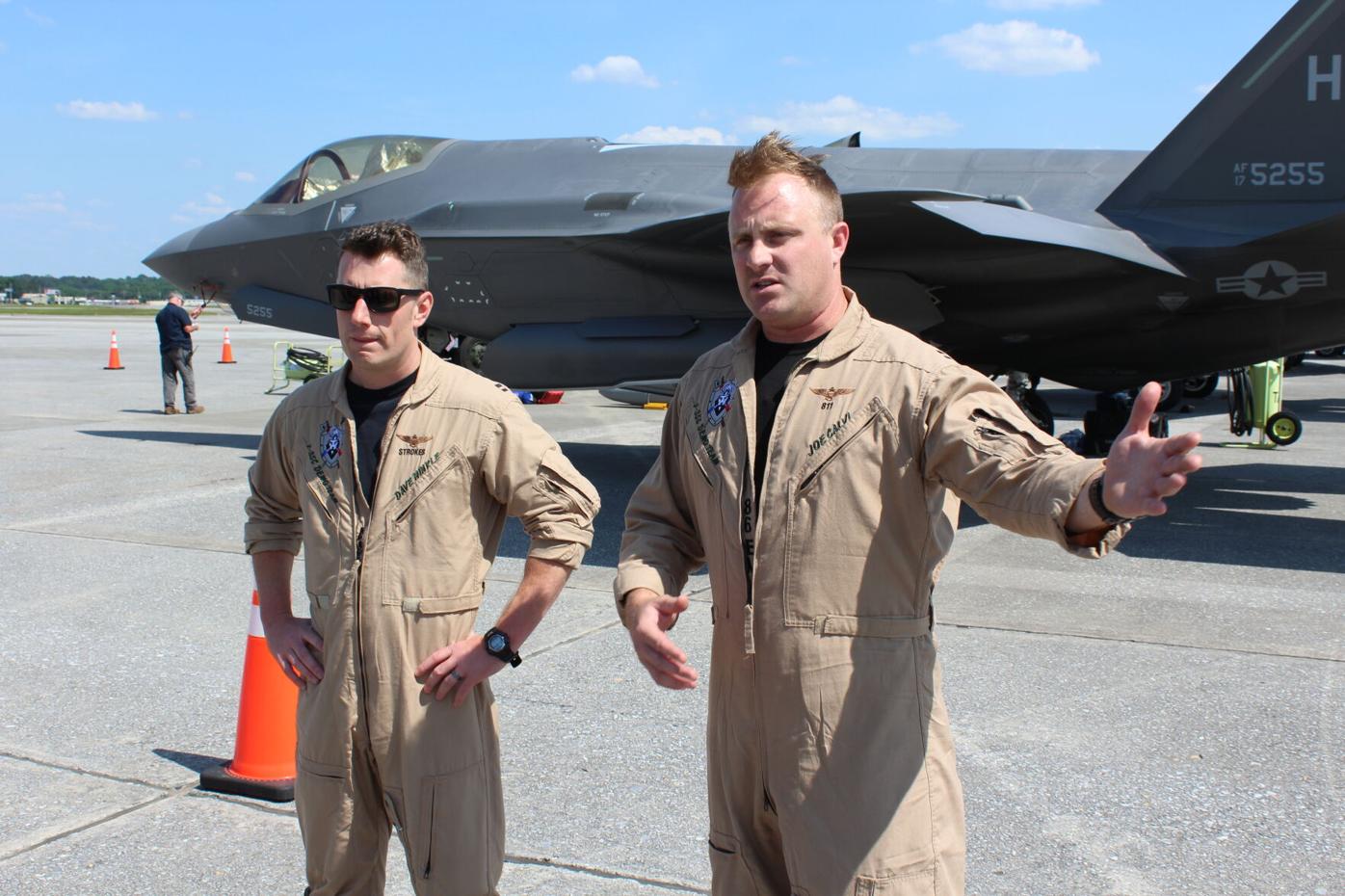 Air Force pilot Maj. Kristin Wolfe’s F-35 fighter is silhouetted in the clouds over Dobbins Air Reserve Base on Friday.

F-35 jets parked on the tarmac at Dobbins Air Reserve Base.

MARIETTA — On Friday afternoon, a group of reporters stood on the tarmac at Dobbins Air Reserve Base, baking in the sun and fiddling with cameras. In the sky, a gray speck grew larger and louder until an F-35 multi-role stealth-fighter roared past, circling and barrel-rolling before disappearing again.

After landing, the aircraft came into view again, taxiing down the runway. Maj. Kristin “Beo” Wolfe stepped out to chat with the reporters.

Wolfe is the commander of the F-35A Lightning Demo Team, a group of pilots chosen to travel the country and strike awe into audiences at airshows.

“That’s our whole goal,” Wolfe said. “And our mission is to improve, retain and inspire people to join the Air Force, aviation, military, what have you.”

On Saturday and Sunday, she and her colleagues are the headliners at the Atlanta Air Show at Falcon Field in Peachtree City. They’ll also perform alongside the Air Force Heritage Flight Foundation by flying the F-35 in formation with a P-51 Mustang, a World War II and Korean War-era fighter.

The Atlanta Air Show is the first event of the season, to be followed by more than a dozen other shows.

The demo team is handpicked by leadership based on their experience and reputation, Wolfe said.

Wolfe grew up as a military brat and attended the University of Alabama, where she was in ROTC. She has been with the Air Force for about 10 years and flying F-35s about three and a half years. Her callsign, Beo, is a play on her last name, referencing the Old English epic poem “Beowulf.”

The Atlanta show is the “closest (she’ll) get to a hometown show,” she said. Her father, retired pilot Col. Jon Wolfe, attended Stone Mountain High School. Wolfe’s parents and some extended family live in Georgia.

Wolfe and the other pilots will pull about nine Gs during the 18-minute performance. The show is “a lot more Gs, for a more sustained period of time,” than a combat situation, she said.

Wolfe is the first female commander of the F-35A Lightning II Demo Team. She said, however, that she “tries not to make it about being a woman.” Her advice for aspiring female pilots is to not be intimidated and work as hard as anyone else.

The show represents another first — the first time the F-35A (Air Force model) and F-35 (Navy model) will perform together in an air show. Also at Dobbins Friday were Navy pilots Lt. Joseph Calvi and Lt. David Hinkle.

Calvi and Hinkle work as instructor pilots for Navy and Marine aviators, but the air show tour is “a little bit special for us and something that we always wanted to do,” Hinkle said.

“I think most of us … got inspired to do it one way or another,” Calvi said. “Some people had parents that were aviators … I was inspired by watching the Blue Angels … to be on the other side of that is really unique.”

For Calvi, it’s the best job he could imagine.

'God, you are so dope': Wilmington native making moves on TV and in music in Atlanta

Crime Stoppers: Reward offered in 2018 shooting death of man on Columbus' East Side

Trump wields power with endorsements, but some in GOP fear midterm damage