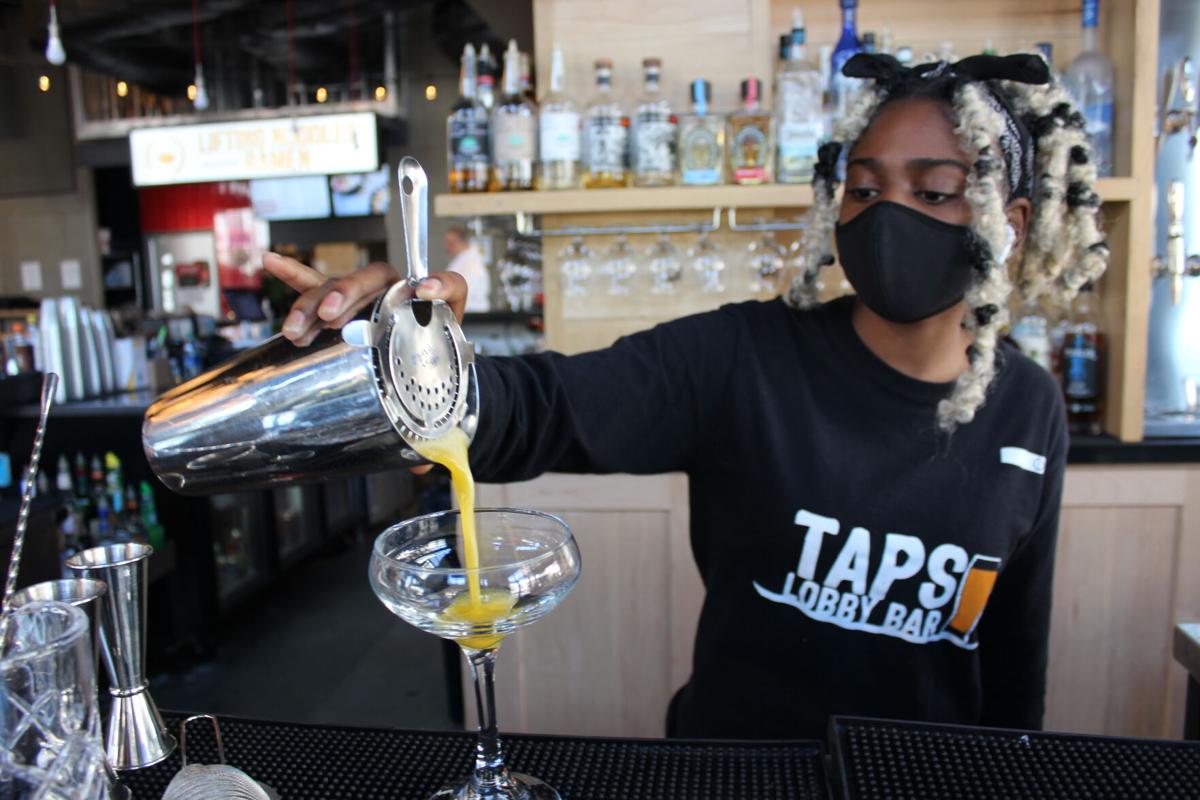 Andrea Curlee, a bartender at the Battery’s TAPS@PH’EAST, makes a drink Sunday. 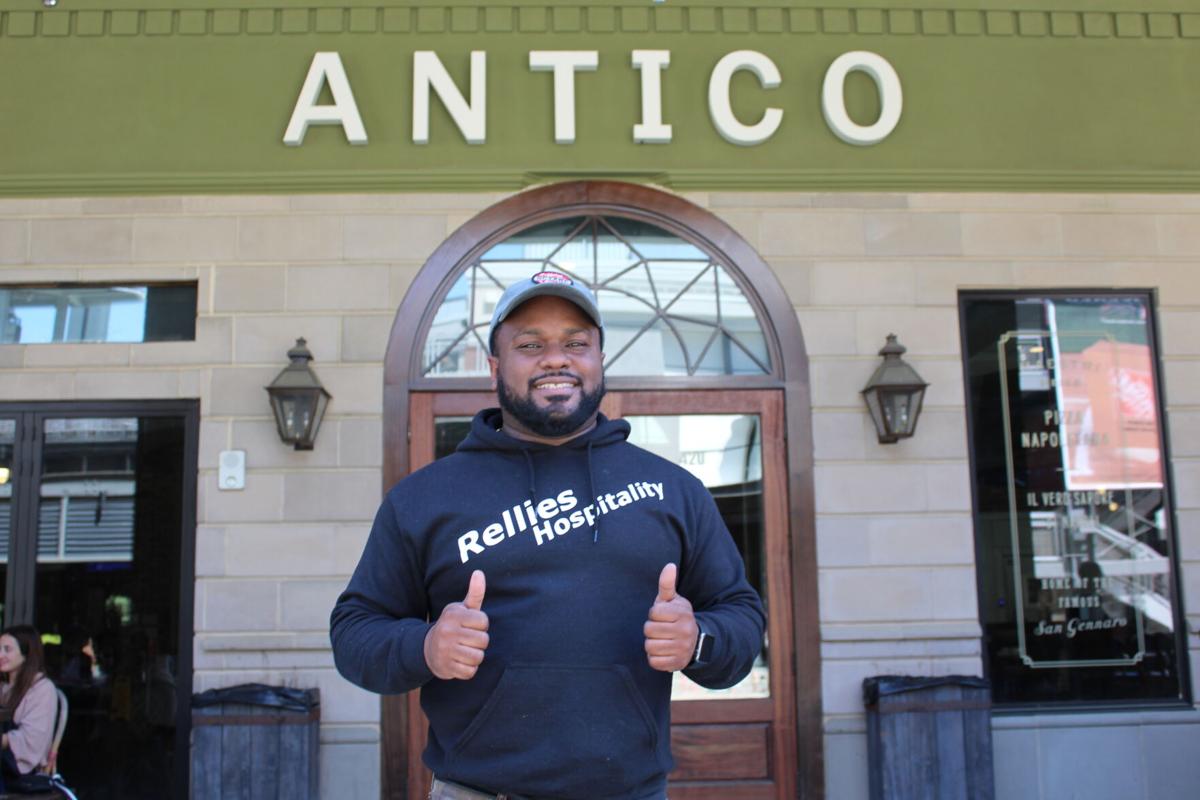 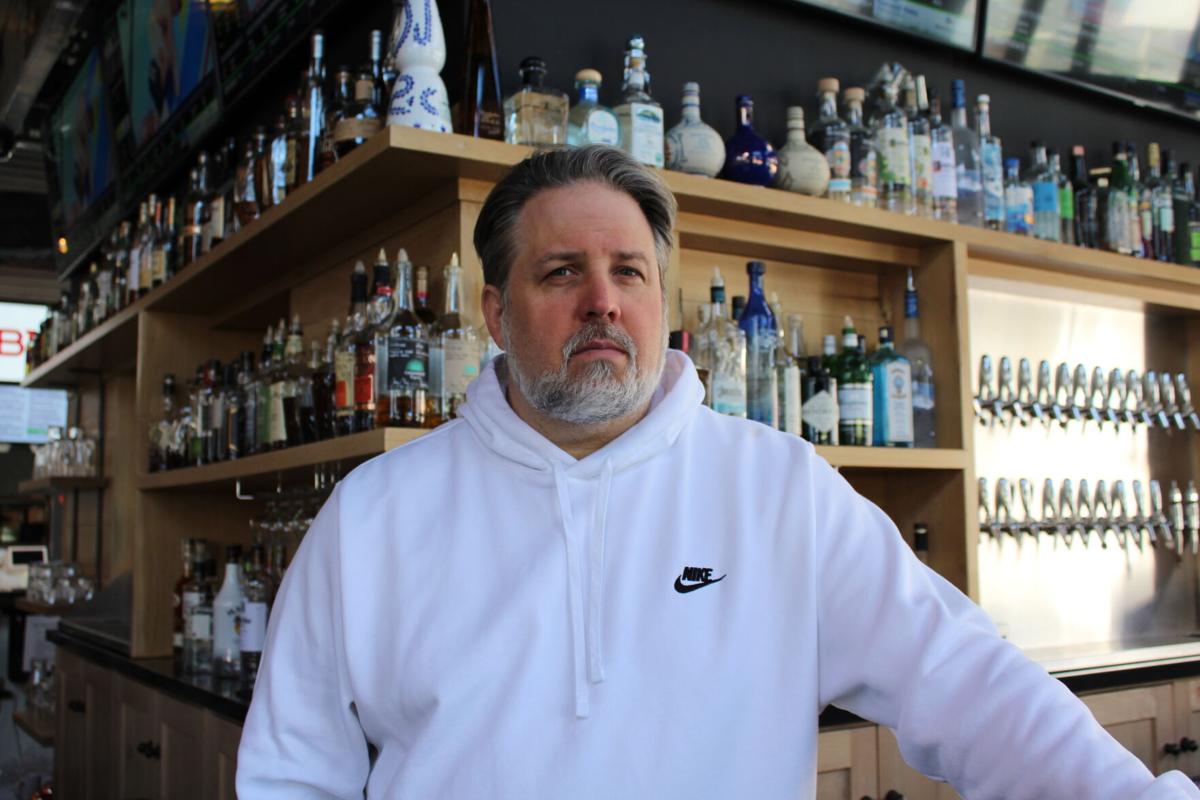 Jim McCarthy, general manager of the Ph'East Food Hall at the Battery, poses at the bar Sunday. 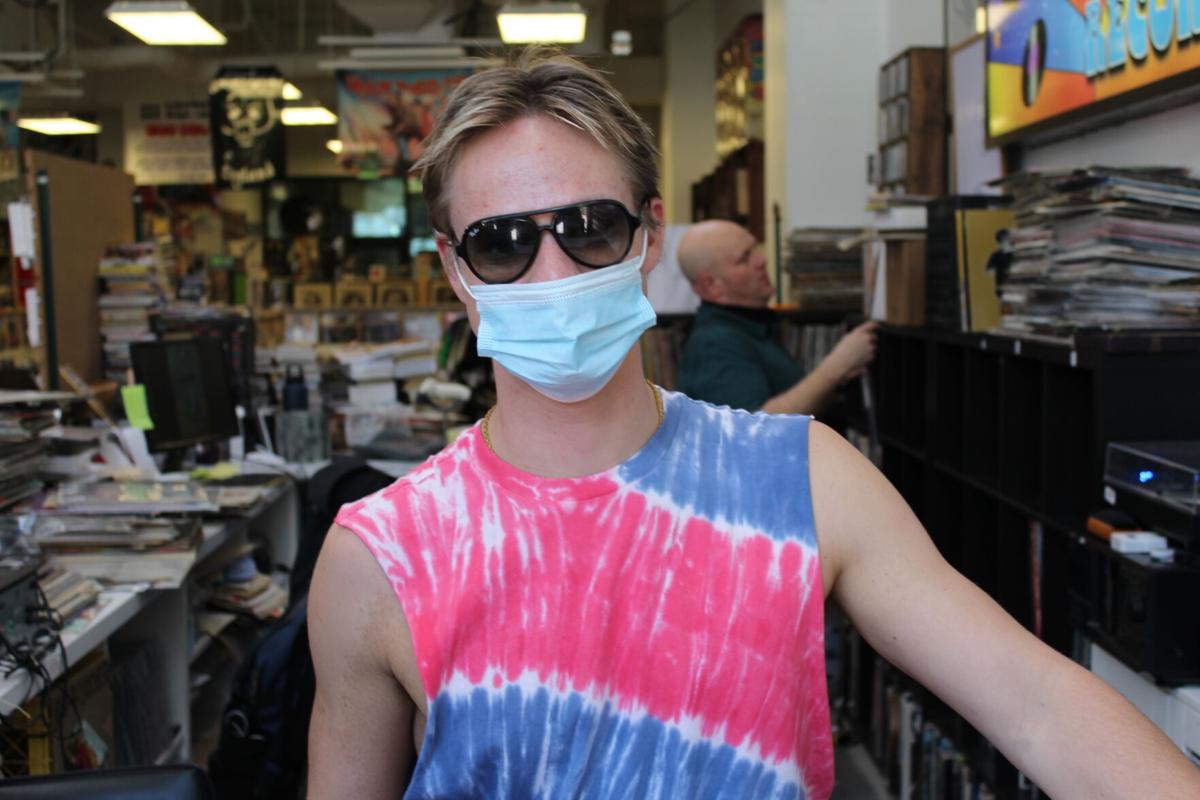 Atticus Roness, a sales associate at Waterloo Sunset Records, stands at the counter of the record store. 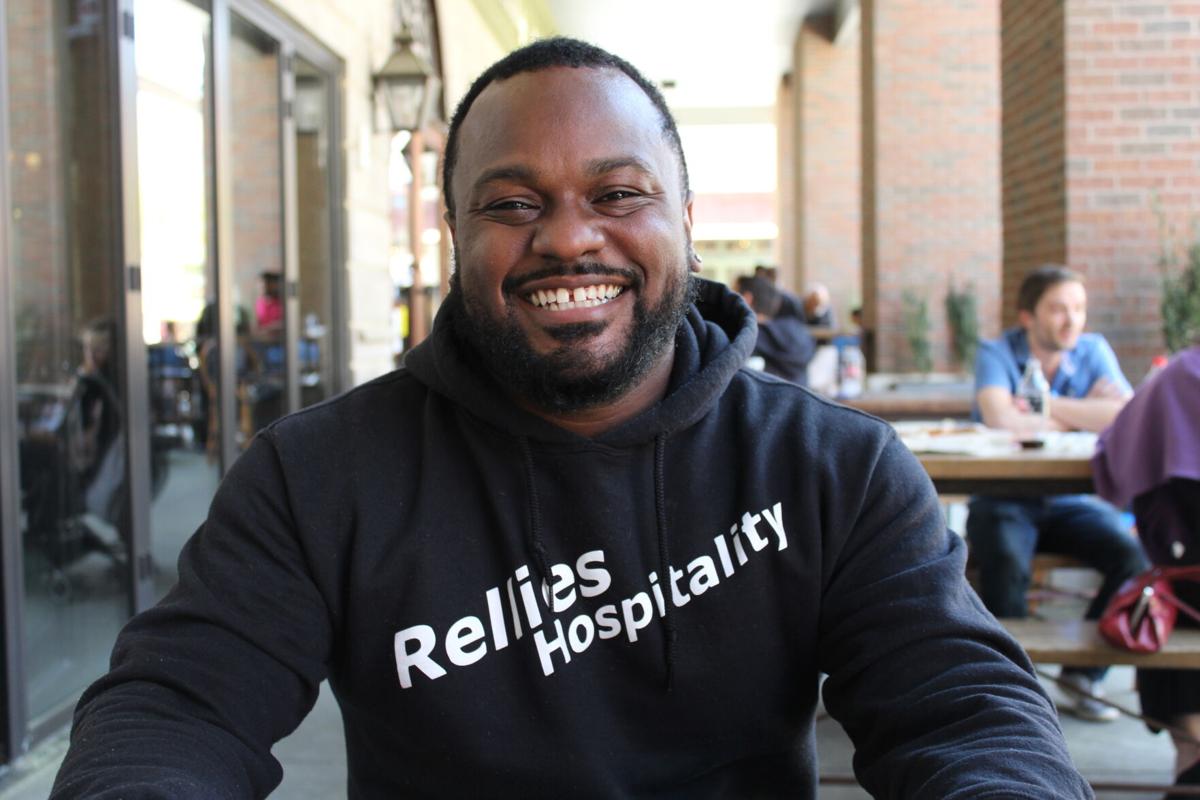 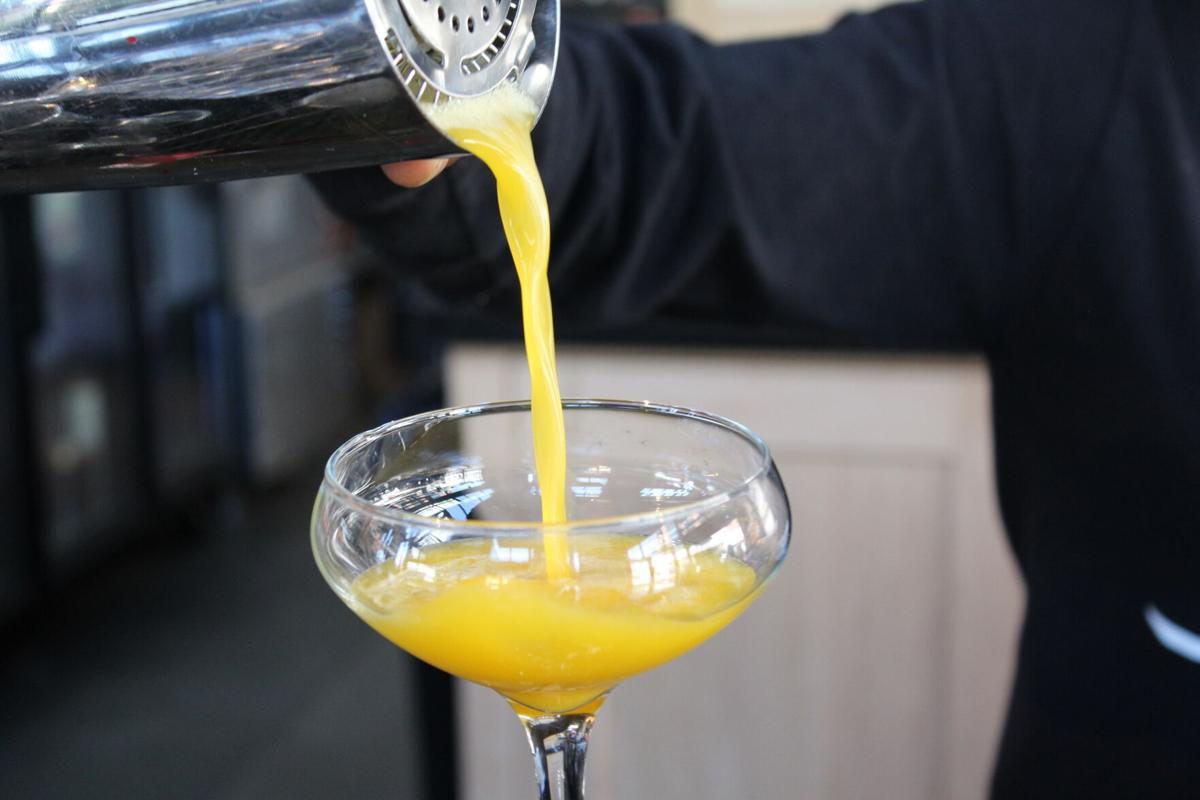 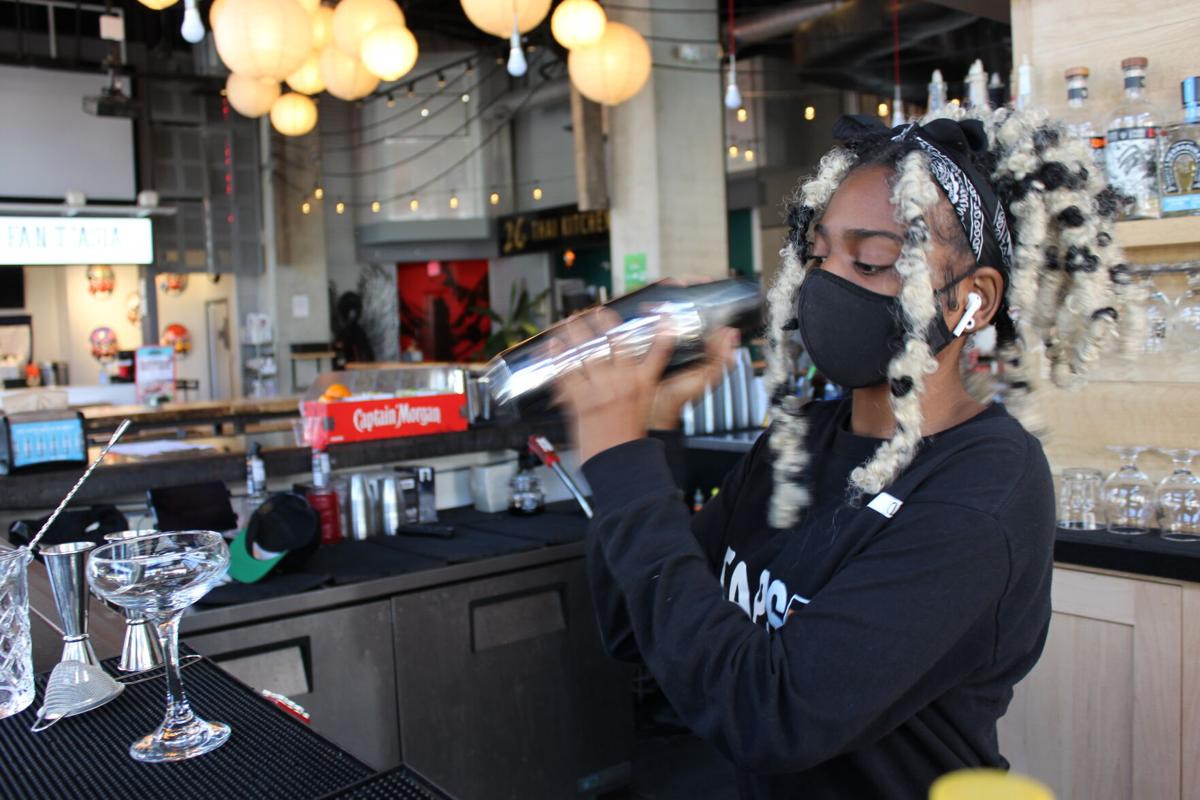 Andrea Curlee, a bartender at the Battery’s TAPS@PH’EAST, makes a drink Sunday.

Jim McCarthy, general manager of the Ph'East Food Hall at the Battery, poses at the bar Sunday.

Atticus Roness, a sales associate at Waterloo Sunset Records, stands at the counter of the record store.

CUMBERLAND — As Democrats, Republicans and Fortune 500 companies continue to trade barbs over Georgia’s new voting law, people working at and visiting The Battery Atlanta over the weekend lamented the loss of the Major League Baseball All-Star Game, which was set to take place at Truist Park this summer. Several workers declined to speak about the issue, deferring to their employer’s corporate communications. Those that would speak about the game felt their wallets would suffer, but often supported the MLB’s decision anyway.

“I’m happy that they stood up, and they see that there was something wrong, and they didn’t want to back that,” said Terrill Patterson, who bartends at Antico Pizza Napoletana at the Battery. “But also, it kind of hurts me, too, because the events and all of the revenue that it was going to bring into the city.”

Patterson is also the owner of Rellies Hospitality, a company that subcontracts servers and bartenders out to bars, restaurants and venues. He reasoned that the game, scheduled for mid-July, would have been a boon for business, considering the easing of COVID-19 guidelines and the number of vaccines that will be administered by then. He guessed the game may have brought 10-20 times as much revenue as an average Braves game. The MLB’s call is bittersweet, then.

The MLB announced its decision Friday in the wake of Gov. Brian Kemp signing the bill, which includes a host of changes to state election law and has been characterized as voter suppression by Democrats. The law also drew critical statements from Delta and Coca-Cola, inciting a rift between Republican officials and some of Atlanta’s largest businesses.

President Joe Biden had encouraged the MLB to pull the game out of Georgia. Former President Barack Obama praised the MLB Saturday “for taking a stand on behalf of voting rights for all citizens.”

Some local and state Democrats, on the other hand, are discouraging businesses from leaving Georgia. Before the MLB’s decision was announced, Cobb Chairwoman Lisa Cupid, a Democrat, released a statement inviting Biden to engage in discussion that would channel frustrations over the law in other ways. Biden’s endorsement of moving the game “sends an unfortunate message to those residents and businesses here who have supported him,” Cupid said.

Meanwhile, former President Donald Trump has called for boycotting the MLB and Kemp has lambasted the decision as bowing to “cancel culture” and partisan activists.

The MLB’s decision to move the All-Star Game from Georgia will cost the local economy $100 million, Holly Quinlan, president and CEO of Cobb Travel and Tourism said in a statement issued Saturday.

Quinlan did not say how Cobb Travel and Tourism came to the $100 million figure.

“Tourism is one of the hardest hit industries during the Covid-19 pandemic,” Quinlan said. “In the initial stages of the pandemic, many Cobb hotels saw single digit occupancy numbers. The 8,000-plus MLB contracted hotel room nights that will not actualize as a result of the MLB All-Star Game relocation will have a negative impact on Cobb’s hospitality industry and other local businesses, further delaying recovery. “

Few would dispute the local impact of MLB’s decision — businesses at the Battery and surrounding area would certainly lose out, he said. But “the reality is that all star games in general are attended by locals.”

“This is a case of what economists like to talk about, the seen and unseen,” Bradbury said. “It’s very easy to see, ‘Oh look at the crowd at the game, look at the money people are spending.’ And you assume that’s all there is, but what you don’t see is that if that game wasn’t there, like it is almost every year ... people don’t just do nothing with money, they go out and spend it elsewhere.”

Bradbury said other economists who have studied the economic impact of marquee events such as the Midsummer Classic have come to similar conclusions.

Thad Whittington, 30, sat at the Georgia Power Pavilion, watching the Braves play the Phillies Saturday evening. He said he hadn’t heard whispers MLB might move the game from Georgia.

“It absolutely shocked me,” he said.

Whittington said friends of his worked at bars and restaurants in the Battery, and he bemoaned the business they would lose.

“It’s not just one game — it’s the whole weekend,” he said. “They’re being punished for politics.”

That area workers and others were politicians’ collateral damage was a common sentiment among people at the Battery. Jamal Austin, who grew up in Powder Springs, played baseball at Harrison High School and the Seattle Mariners’ minor league affiliate, now works as a sales associate at Baseballism, an apparel store at the Battery. He said MLB’s decision to move the game ultimately punished the players.

“That’s the biggest thing for me, because there’s no politics in baseball. Well, there shouldn’t be politics in baseball,” he said. “I’m 50/50 — I see why they did it, you know, they’re standing up (against) injustice, which I love. But at the same time, again, this is an outlet for a lot of people, to come see the game. It brings, white, black, purple, yellow, green, all together. So I just feel like, Georgia as a whole ... we lost a lot on that decision.”

A common refrain was respect for MLB’s making a hard decision in defense of an alleged assault on voters’ rights, but disappointment that it would ultimately harm the area economy.

Gabe Lustman, a singer from Atlanta, said he agreed that organizations should stand up for what they believe in. But the Atlanta area needs events like the All-Star Game “to be a mecca,” he added.

Not everyone was against SB 202. Jim McCarthy, general manager of Ph’East — a Battery food hall home to a bar and a handful of Asian dining spots — said SB 202 is a good bill because the drawn out vote-counting process last election “kind of looks fishy.” The MLB’s decision was too hasty, he said, and he hopes they reconsider.

“I think it’s just a way to get more organized,” he said. “Honestly, I don’t really think it’s a big deal to have to show identification.”

Businesses who already pay higher rents to be at the Battery are being unfairly punished, McCarthy said, adding that baseball had been dragged into a political arena where it didn’t belong. Bar buyouts, where liquor companies or other groups sponsor private parties, would have been useful windfalls that a typical gameday doesn’t include, he said.

Atticus Roness, a sales associate at Waterloo Sunset Records, doesn’t think his employer’s business will be radically affected, as the store already occupies a niche category that isn’t necessarily tied to baseball crowds.

Roness hasn’t followed the debate over the bill, but figures the MLB knows what it’s doing and is making the best decision.

“But overall, I think just having foot traffic and people noticing where we are, that’s going to be a big blow,” he said.

Others voiced unqualified support for the decision, despite the potential damage to retail profits.

“I think it’s very important for private organizations to chime in in a way they’re able to about political decisions,” said Marietta’s Zayd Burns, 33. A large percent of MLB’s players and fans are people of color, he added, and any policy targeting “those people that are their actual bread and butter” should be fought by organizations like the MLB.

LeAndraw Miller, 32, honed in on the bill’s outlawing the distribution of food or water to people in line to vote, a policy meant to curb already illegal electioneering.

“It’s a crime to be humane and to just help people. That’s an issue,” he said. MLB’s decision, he continued, says to the bill’s supporters, “Hey, we’re going to make a statement and we’re gonna hit you in your pockets.”