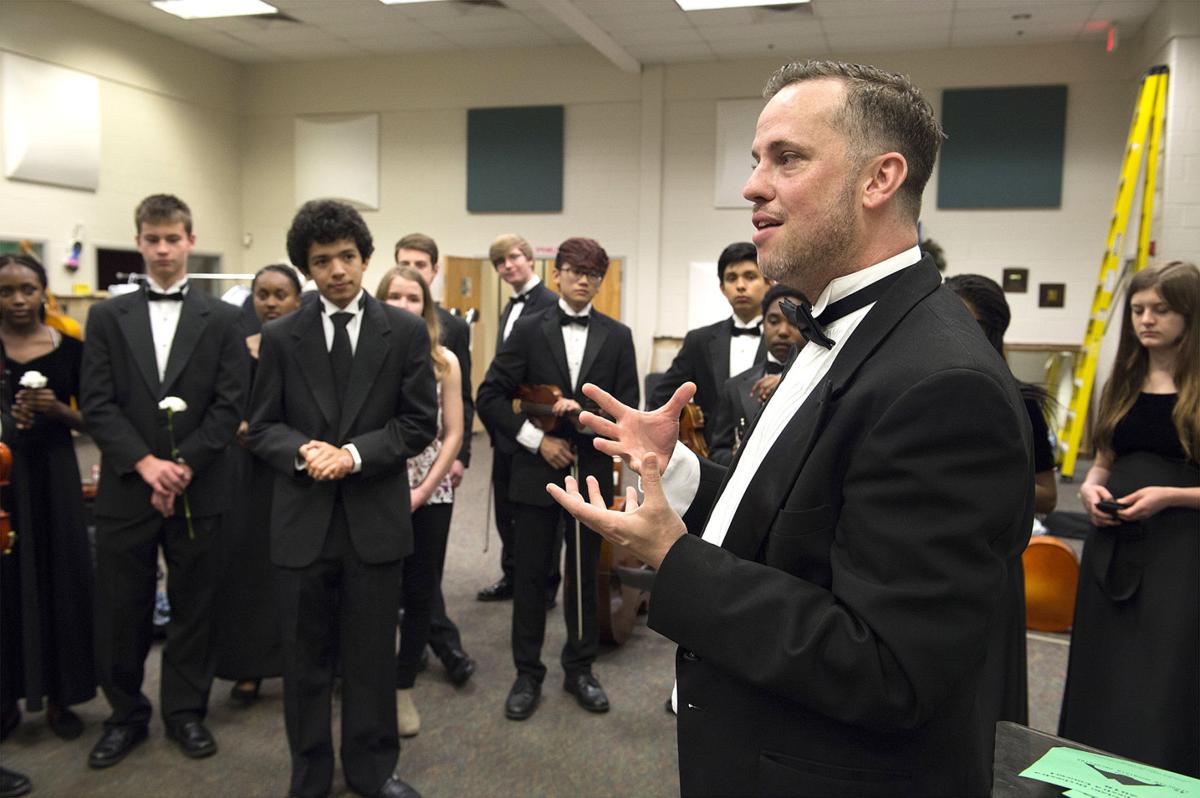 In this file photo from 2018, Joel Schroter, then director of Kennesaw Mountain High School's orchestra, thanks and encourages his students before the final concert of the school year.

A teacher at Kennesaw Mountain High School faces assault and DUI charges after police say he drove under the influence of a hallucinogen and crashed his vehicle into another car carrying a couple and their 4-month-old infant.

Warrants show Joel Schroter, 43, of Marietta, was arrested after multiple witnesses to the crash on June 15 said he’d seemingly intentionally swerved to crash his 2008 Mazda 3 into a vehicle at the intersection of Old 41 Highway and Barrett Parkway in Kennesaw and attempted to hit others.

Schroter is listed as an orchestra instructor on Kennesaw Mountain High School’s website.

An incident report from the Kennesaw Police Department, the arresting agency, shows that an adult in the vehicle Schroter hit limped away from the crash as police arrived, shouting a description of Schroter to officers and telling them to, “get him, get that man with the red shirt.”

A Kennesaw police officer wrote in the incident report, “As I approached the male he started jumping and dancing, and flailing his hands in the air stating, ‘thank you God, thank you God,’ and continued laughing very loud and giggling.’”

The couple in the vehicle that Schroter hit repeatedly told police that Schroter told them he intended to cause the wreck and that it was a sign from God, the reports state.

Police said both adults in the car appeared to have injuries, while the baby did not. All three were transported to Wellstar Kennestone Hospital.

Police say two vehicles were disabled in the crash, and one witness caught the incident on a dashboard camera inside their car, warrants show.

Officers said Schroter had been driving under the influence of a drug — possibly LSD, cocaine, ecstasy or another synthetic/natural hallucinogen.

Officers said after making contact with Schroter, he continued “giggling” and speaking of “visions and ideas pertaining to religion and ‘God’” commanding his acts. They also reported Schroter saying, “I’m on a space shuttle.”

Warrants show Schroter fought officers as they attempted to arrest him and put him into a patrol car at the scene.

Schroter was also reported to have a puppy in his car at the time of the crash. Police say the puppy was monitored on scene, and appeared to have no injuries. The animal was handed over to Cobb County Animal Control.

Schroter was arrested on June 15 and released from the Cobb jail two days later on a bond of $15,000, according to jail records. He is charged with aggravated assault, reckless driving, obstruction of law enforcement, DUI, driving too fast for conditions and failure to maintain lane, the records show.

Cobb schools officials issued the MDJ an emailed statement in response to a request for comment:

“The District is aware of the arrest of a Kennesaw Mountain High School teacher. Due to privacy restrictions, the District cannot provide additional information during an ongoing investigation. We will act in accordance with any relevant District policy upon the conclusion of the police investigation.”