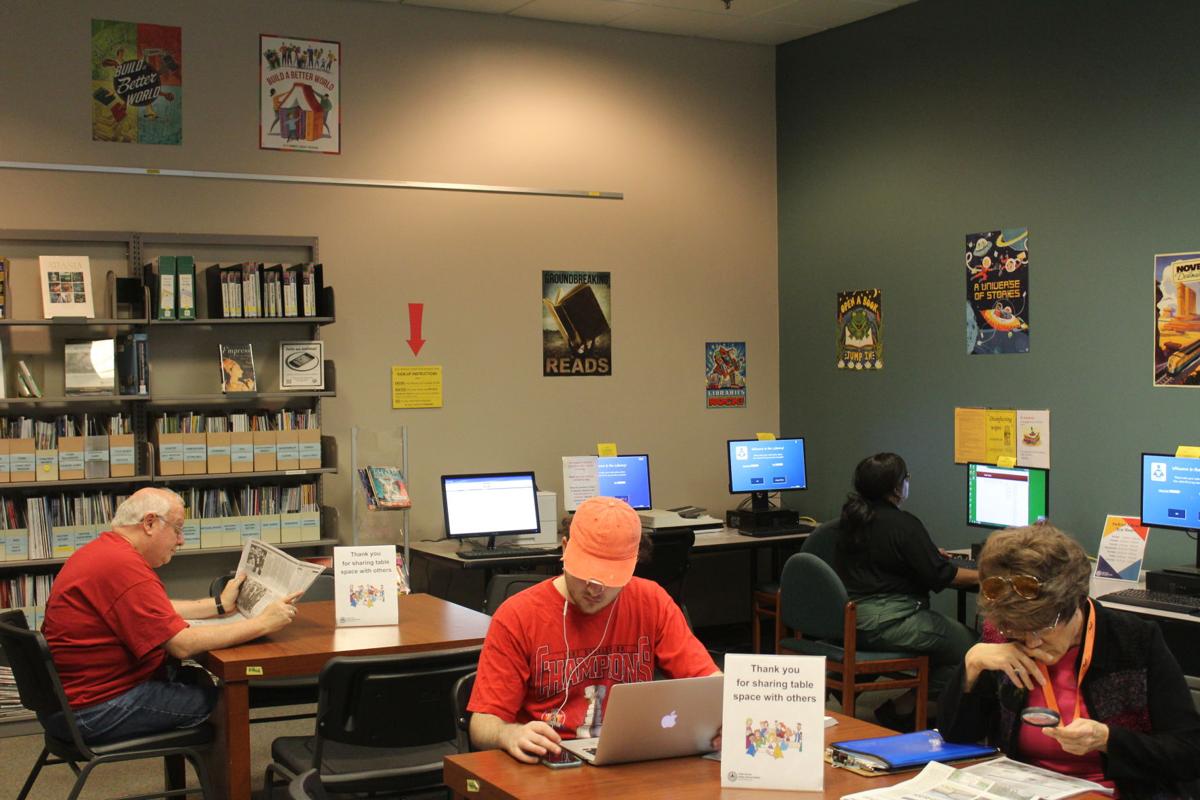 “We get such a diverse population that comes here and uses this, and it really is a destination place,” said Alexandra Beswick, the manager of Cobb County Public Library System’s central region. 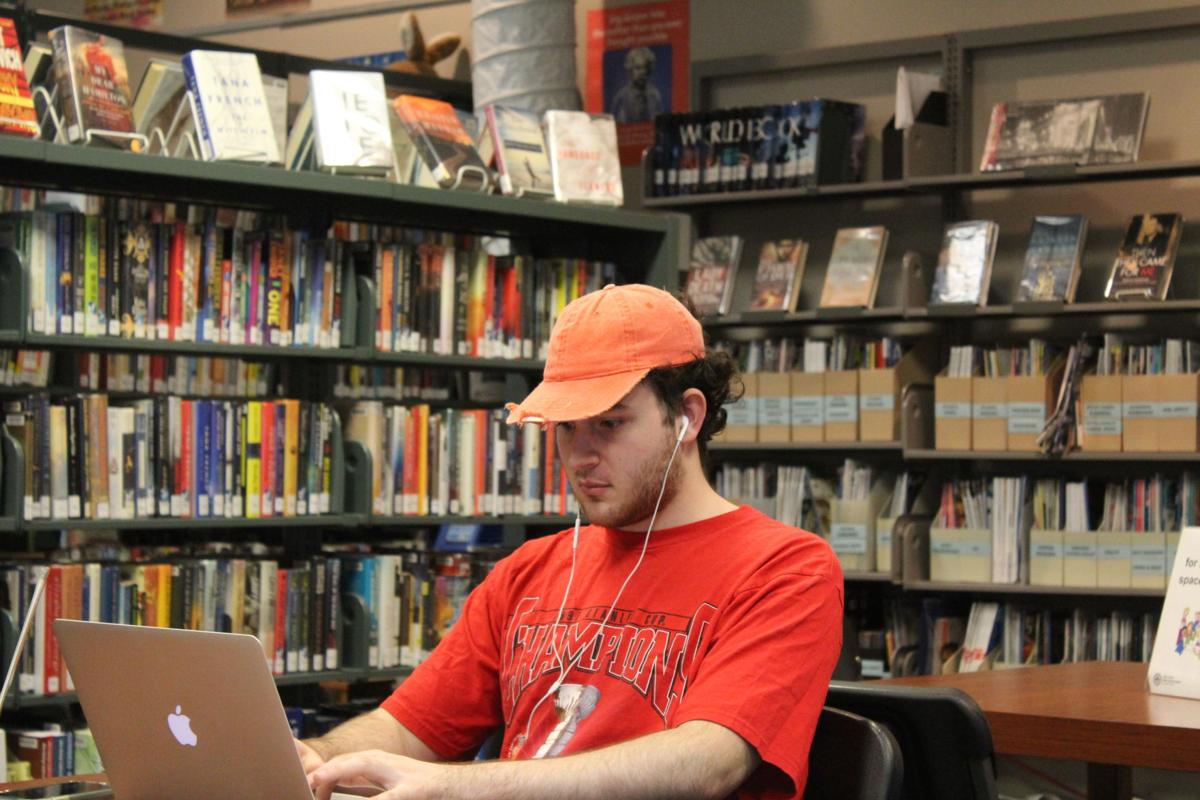 Sam Judd, a student at Georgia College in Milledgeville, said the library was a refuge of sorts in high school. 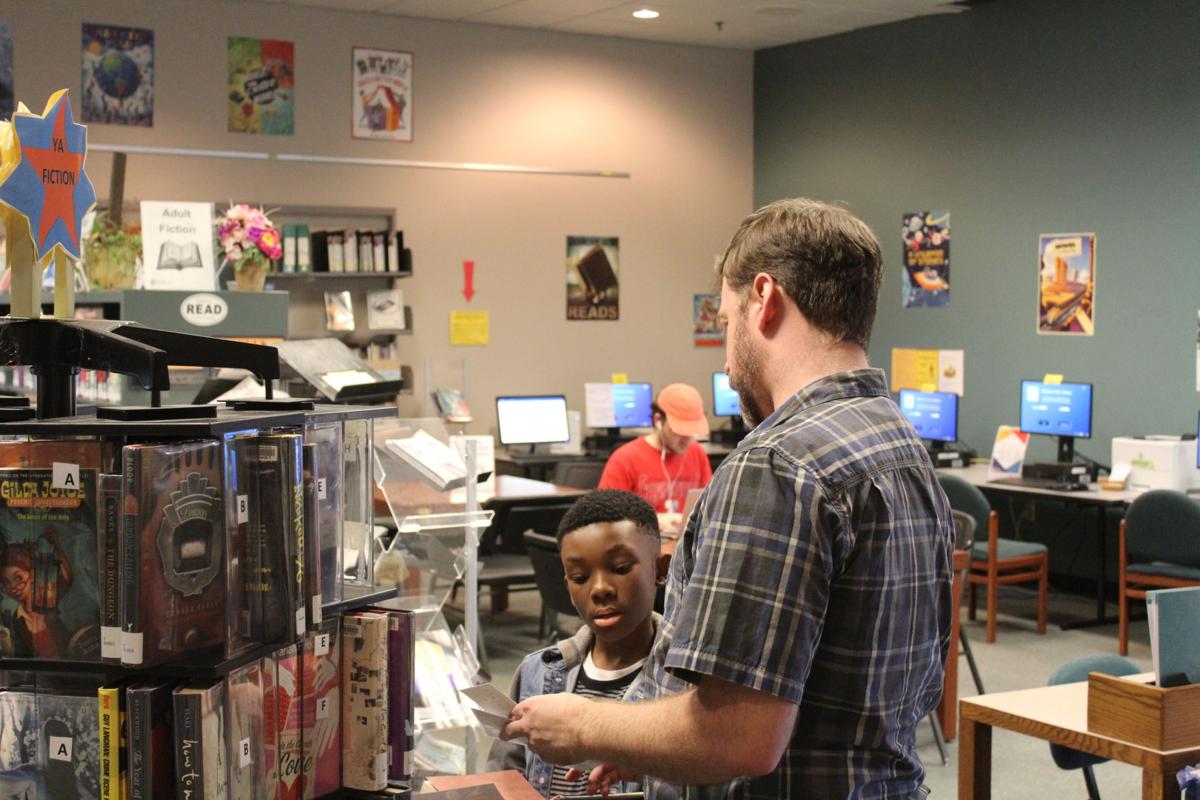 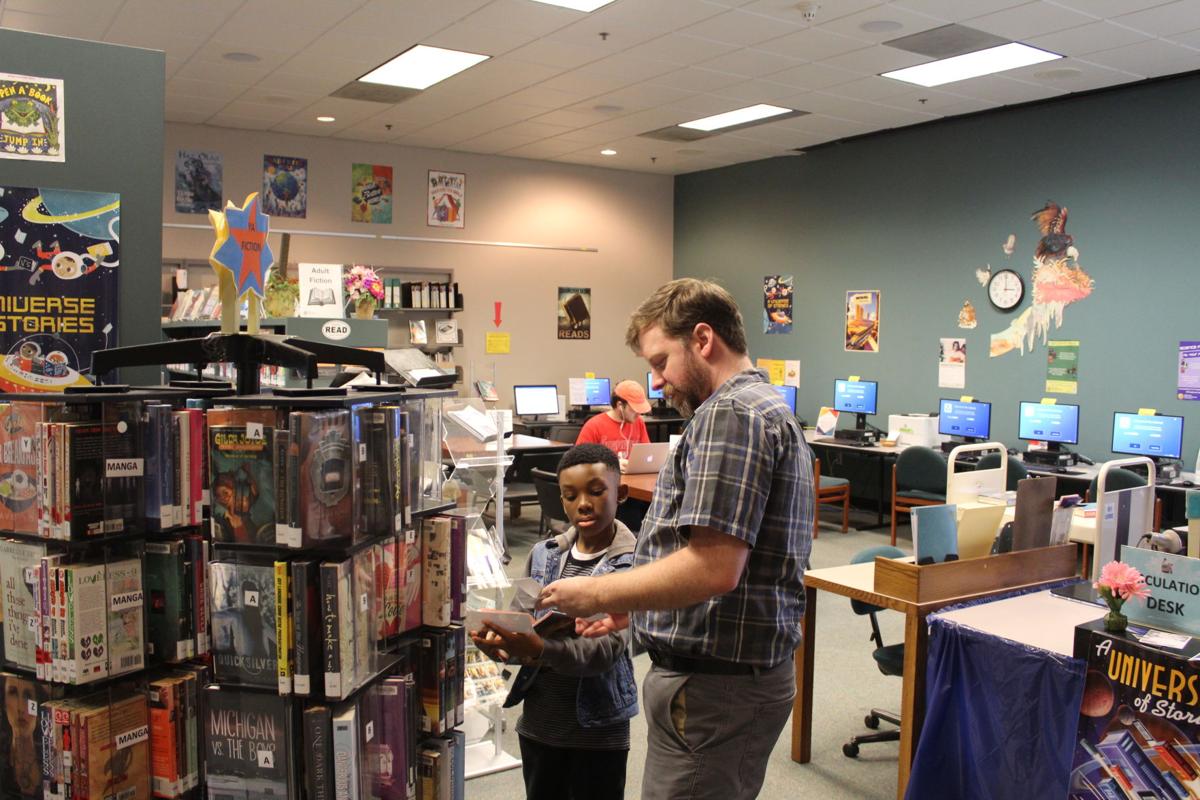 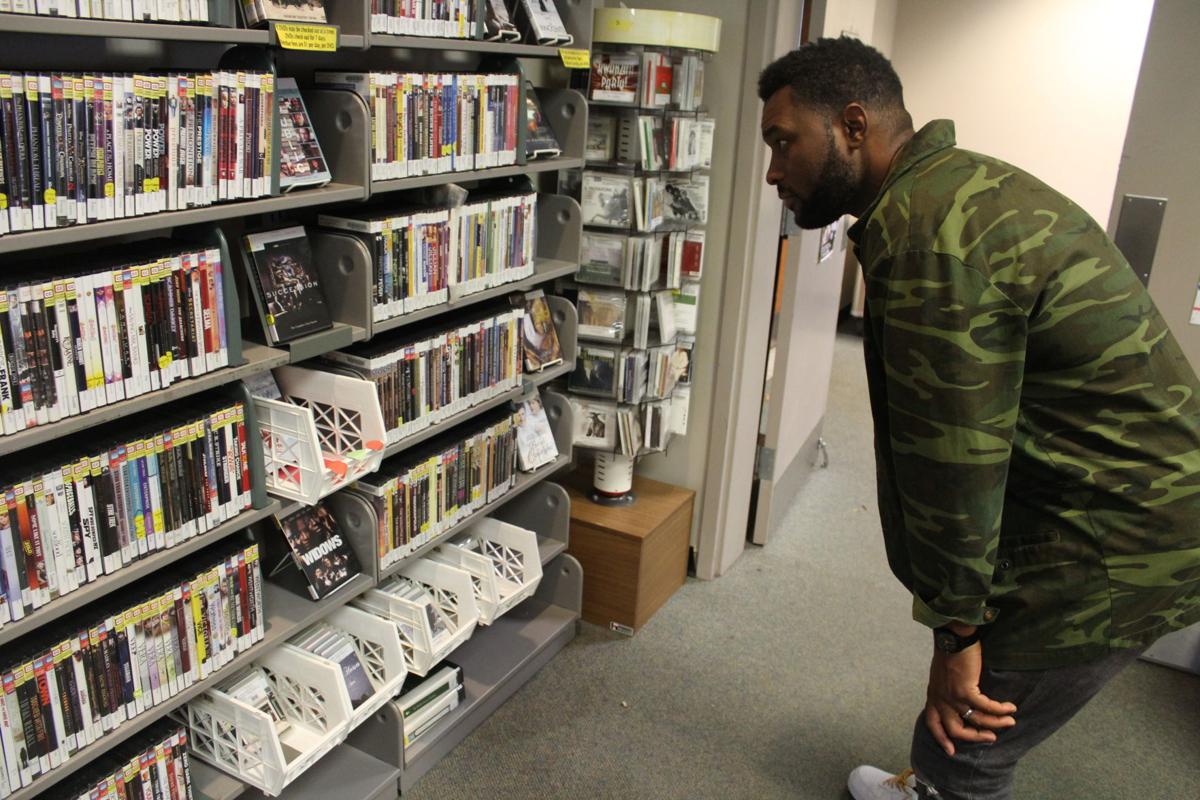 A patron peruses movies at the part of the Switzer Central Library that will remain open for renovations. 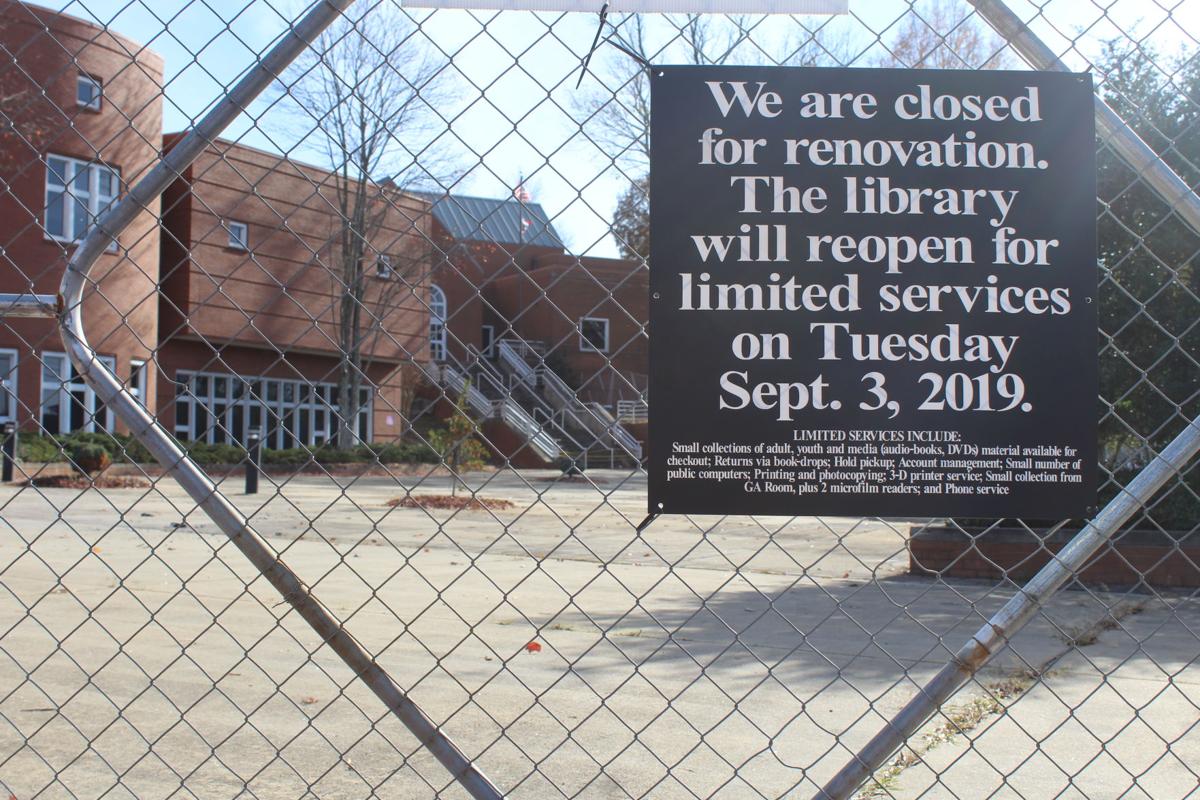 The Switzer Central Library closed over the summer for renovations, which are expected to be completed by September 2020.

“We get such a diverse population that comes here and uses this, and it really is a destination place,” said Alexandra Beswick, the manager of Cobb County Public Library System’s central region.

Sam Judd, a student at Georgia College in Milledgeville, said the library was a refuge of sorts in high school.

A patron peruses movies at the part of the Switzer Central Library that will remain open for renovations.

The Switzer Central Library closed over the summer for renovations, which are expected to be completed by September 2020.

Joyce Iding visits the Switzer Central Library several times per week. And she has an opinion regarding the renovations that have shut down all but a small corner of the 64,000-square-foot building.

Cobb County’s largest library closed in August for an $8.3 million renovation which, staff say, will turn the system’s flagship location into a true 21st-century library.

“It needed to change for the times and what people are looking for now in libraries, and you’ll see this nationally,” said Alexandra Beswick, the manager of Cobb County Public Library System’s central region.

Anthony, who declined to share his last name, was perusing movies Wednesday afternoon as his son looked over books. He said he liked the library’s renovation plans, which, he described as a “WeWork for books,” referencing a company that provides coworking spaces with several amenities in cities around the world.

The Switzer Library — though it was not known as such then — first opened in 1893 at the location of the current K. Mike Whittle Designs, a florist on Church Street. It then moved to the space now occupied by the Marietta Art Museum before finally setting up shop in its current 64,000-square-foot space on Roswell Street in September of 1989.

Library staff had wanted a renovation for years before the funding appeared in the form of two consecutive Special Purpose Local Option Sales Tax allocations. Cumulatively, voters approved more than $6.3 million in renovations in the 2011 and 2016 penny sales tax referendums. A $2 million state grant provided the rest of the money.

When it opens in September 2020, the library will offer:

♦ An expanded Georgia Room, the region’s go-to collection for genealogy and local history, according to Beswick;

♦ Two “maker spaces” where adults and teenagers can come together to use tools for do-it-yourself projects, Beswick said, “not only with what we might be able to provide for them, but say if there’s a group of people who want to get together to create something and they just don’t have the space to do it”;

♦ A “family computing room” for those who need to use a computer but cannot leave their children alone at home;

♦ A special needs resource room, which will be moved from its current location at the Windy Hill Library;

♦ A teenage space separate from the children’s area, which Beswick said will have a “cafe-bar where they can plug in” and more;

♦ A single information desk, which will function as a one-stop shop for all♦ of a patron’s inquiries; and

♦ A lobby with vending machines and cafe tables.

“We’re not gaining space, but we’re reconfiguring and making smarter use of it now for where we see the needs and what people come in asking for,” Beswick said.

Marianne Wurtele began at the Cobb library system as a page and is now the head of its computer help department.

She said she is most looking forward to the adult maker spaces and the fact there will be more opportunities for staff to interact with patrons.

Automating “mundane” tasks like checkout will free up staff time for programming, Wurtele said, noting the library had to suspend its self-serve checkout stations while the renovations continue.

Beswick also imagines the library offering some social services on a temporary basis. She sees it functioning as a satellite office for Marietta Police, social workers or the Division of Family and Children Services, and cites the strong attendance of an eviction workshop the library recently offered and its partnership with a group of retired business people who help mentor would-be entrepreneurs.

“This library really is and has been such a part of the community as the community has changed from city housing complexes around it to more upper scale housing, but then we have the bus route outside,” Beswick said. “We get such a diverse population that comes here and uses this, and it really is a destination place.”

Sam Judd, a student at Georgia College in Milledgeville, grew up in the area. The library was a refuge of sorts in high school.

His family had two “really loud” dogs. He would go to the reference section for peace and quiet.

“This was the only place I could get stuff done,” he said.

He wasn’t familiar with the library’s renovation plans, but said he would like the opportunity to check out more than books, citing Georgia College’s library’s loan program, where students can check out equipment such as PA systems.

Chris Gunning has lived in Marietta since 1973 and comes three or four times per month, usually to read Aviation Weekly and peruse the books.

“I’ve been a fan of this particular library because it’s well placed,” Gunning said. He isn’t bothered by the renovation. “They have to do what they have to do.”

He said the community’s needs have changed. But he doesn’t use its computers and doesn’t need it to meet friends. He just comes to the library, he said, to “fill my brain.”

I am glad that a function in Cobb is attempting to enter the 21st century!