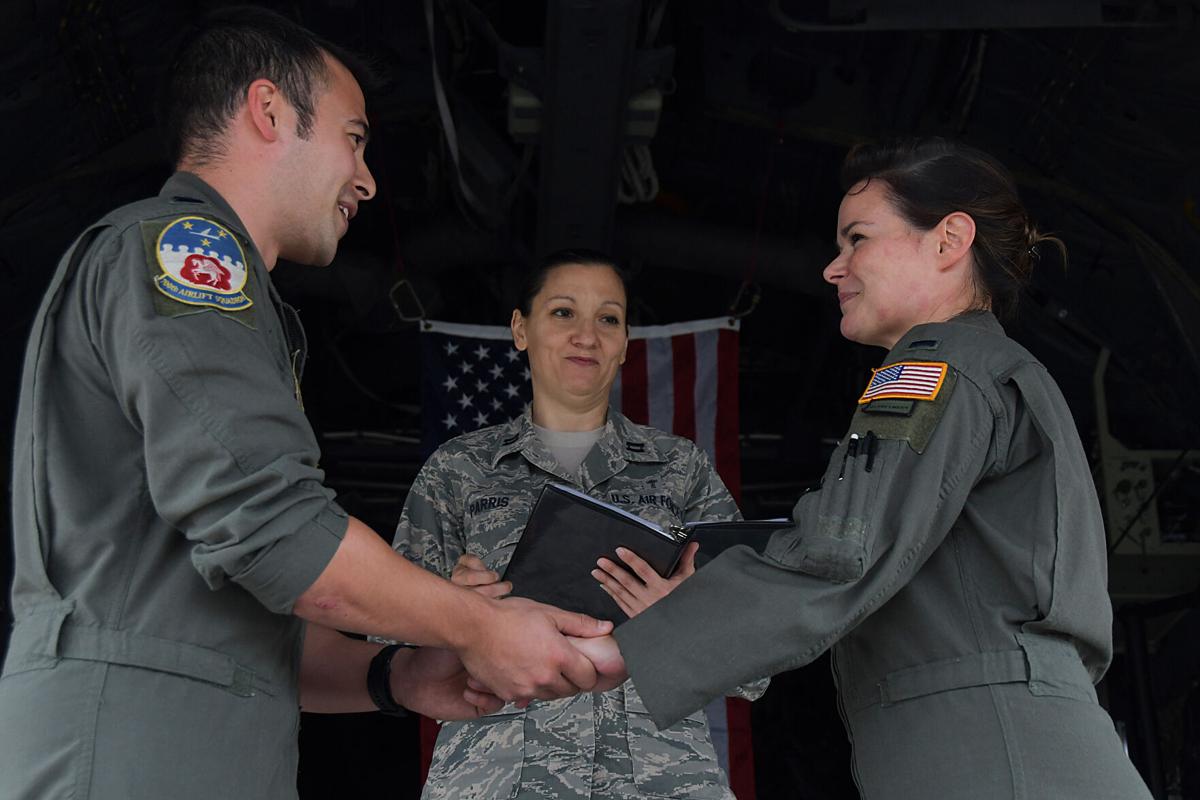 Capt. Will Jones, 700th Airlift Squadron pilot, recites his vows to 1st Lt. Lyndsy Harrison, a 700th AS navigator, during a wedding ceremony held on the back of a C-130H3 Hercules at Dobbins Air Reserve Base on Nov. 10. The couple came up with the idea to get married on the back of a C-130 to honor their love of aviation. 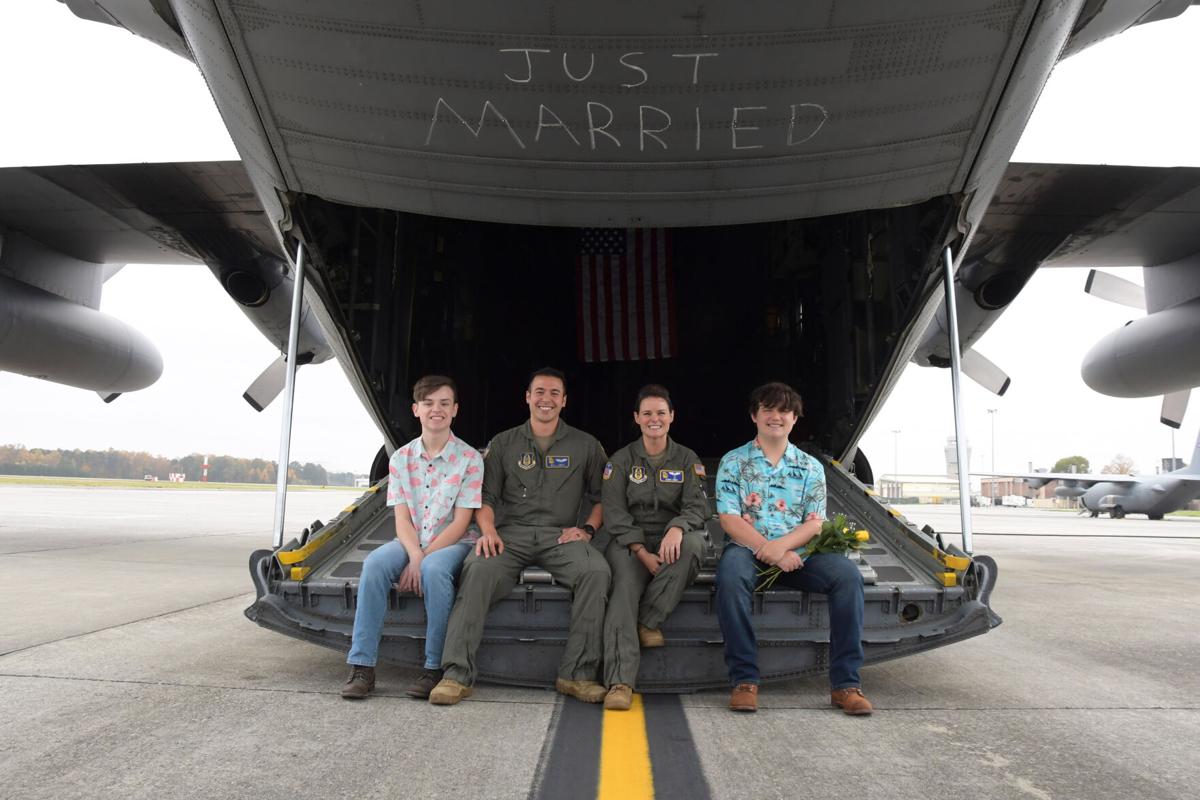 Capt. Will Jones, 700th Airlift Squadron pilot, and 1st Lt. Lyndsy Harrison, a 700th AS navigator, pose for a photo with Harrison’s two sons shortly after a wedding ceremony held on the back of a C-130H3 Hercules at Dobbins Air Reserve Base, Ga. on Nov. 10, 2020. The couple came up with the idea to get married on the back of a C-130 to honor their love of aviation.

Capt. Will Jones, 700th Airlift Squadron pilot, recites his vows to 1st Lt. Lyndsy Harrison, a 700th AS navigator, during a wedding ceremony held on the back of a C-130H3 Hercules at Dobbins Air Reserve Base on Nov. 10. The couple came up with the idea to get married on the back of a C-130 to honor their love of aviation.

Capt. Will Jones, 700th Airlift Squadron pilot, and 1st Lt. Lyndsy Harrison, a 700th AS navigator, pose for a photo with Harrison’s two sons shortly after a wedding ceremony held on the back of a C-130H3 Hercules at Dobbins Air Reserve Base, Ga. on Nov. 10, 2020. The couple came up with the idea to get married on the back of a C-130 to honor their love of aviation.

DOBBINS AIR RESERVE BASE — There is an old superstition that says rain on a wedding day brings good luck and will lead to a marriage that lasts.

Two aircrew members from the 700th Airlift Squadron found themselves not only lucky enough to tie the knot with one another, but also found a way to tie in their love of flying on their special day.

“I think when he brought up the idea of us getting married in the back of the plane, he threw it out there as a joke,” said 1st Lt. Lyndsy Harrison, a 700th AS navigator, recalling how she and Capt. Will Jones, 700th Airlift Squadron pilot, came up with the idea to get married on the back of a C-130. “But when I approved and was just as stoked about it as he was we didn’t want to do it anywhere else.”

As the C-130H Hercules landed at Dobbins last Tuesday, it ended like any other flying mission at Dobbins. The plane taxied around the flightline on a drizzly afternoon. Once the plane got closer to its parking spot, however, it was apparent that this was a unique flight.

“As we were taxiing back, I was overwhelmed with a lot of different emotions,” Lyndsy said. “I was super happy that I was minutes away from marrying my guy. I was excited for our families and my sons who admire Will so much. I was happy that people actually showed up, but I was also extremely sad that I’ll never get to fly with Will again. He is an amazing pilot and I am fortunate to have flown with him.”

Not unlike other couples planning their special day, the two aviators also ran into their fair share of challenges. For one, regulations restrict married couples from flying on the same plane. Will said they had originally planned to get married on the flight, which would have been fine since they weren’t married when they took off, but then what about the landing? Another issue was planning the flight itself. They obviously couldn’t fly the plane just for the sake of the wedding, so they found a flight on the schedule where they were both flying and planned the wedding around that date.

“It was a planned training sortie,” Lyndsy explained. “We were both being evaluated by instructor aircrew.”

Since it was a training mission, and one flown in the rain at that, it was important for them to stay focused on the task at hand and not let their nervous excitement about the big day cloud their vision. Luckily, they’re trained to stay focused regardless of any outside distractions.

“We do a pretty good job of compartmentalizing everything,” Will explained. “My biggest concern was flying a two-ship tactical mission in the weather. I didn’t get nervous or have the wedding portion on my mind until the engines were shut down and I was unbuckling my seatbelt.”

And finally, they had to be in leave status for the ceremony so they weren’t on the clock. It could only commence after engine shut down and all the checklists were complete, Will said. Lyndsy also pointed out that most brides get all day to work on their hair, but she had to settle for helmet hair in lieu of a fancy up-do.

After a crew chief marshalled in the plane, the aircrew lowered the ramp, revealing a U.S. Flag hanging as a backdrop. The pilot and navigator — or in this case, the bride and groom — rushed off the back of the plane like a couple late to the chapel and got into position. Will’s mother affixed a yellow rose boutonniere to her son’s flight suit while Lyndsy’s parents handed their daughter a small bouquet of yellow roses.

Next, Capt. Sara Parris, 94th Airlift Wing chaplain and wedding officiant, stood in front of the flag and prepared to begin the wedding ceremony from the back of the C-130.

Although this might be an unusual location for a wedding, it seemed fitting for the two Dobbins aviators, as their love of flying is what brought them together.

Lyndsy began her career at Dobbins in the medical squadron before finding an opportunity to become an officer and attend navigator training. It was a long process with challenges of its own, she explained. As for Will, he grew up in an Air Force family so he had been around C-130s his whole life and found a love for aviation at an early age, he said.

“Flying for me has been therapeutic, it is relaxing and I feel in my place up there,” Lyndsy said. “I never gave up on my dream of flying and went after it. During that time Will and I started dating. He encouraged and supported me to reach my goals that I was told were impossible. He continues to motivate and inspire me to be better.”

The rest of the wedding proceeded as any other. Before the ceremony even started, one of their fellow flyers, Lt. Col. George Pelech, jokingly split the group into two sides based on association to the bride or groom. The bride’s father walked her to the makeshift altar and gave her away to the groom. The chaplain discussed the importance of marriage and guided the couple through the ceremony. The couple exchanged rings and were then pronounced husband and wife.

Before they made their exit, the groom ran back into the cargo hold and began lowering the topside of the ramp to reveal the words “Just Married” written on the back in chalk. Everyone cheered while the new married couple embraced and then began greeting all those in attendance.

Anyone who has ever done a FOD walk, a requirement on flight lines to look for Foreign Object Debris, will be happy to hear that no rice was thrown at the end of the ceremony.

Auburn hoops overwhelmed by No. 1 Gonzaga

Light up the holiday season with North Point Community Church

Retail workers fear for their safety: 'An anxiety attack waiting to happen'