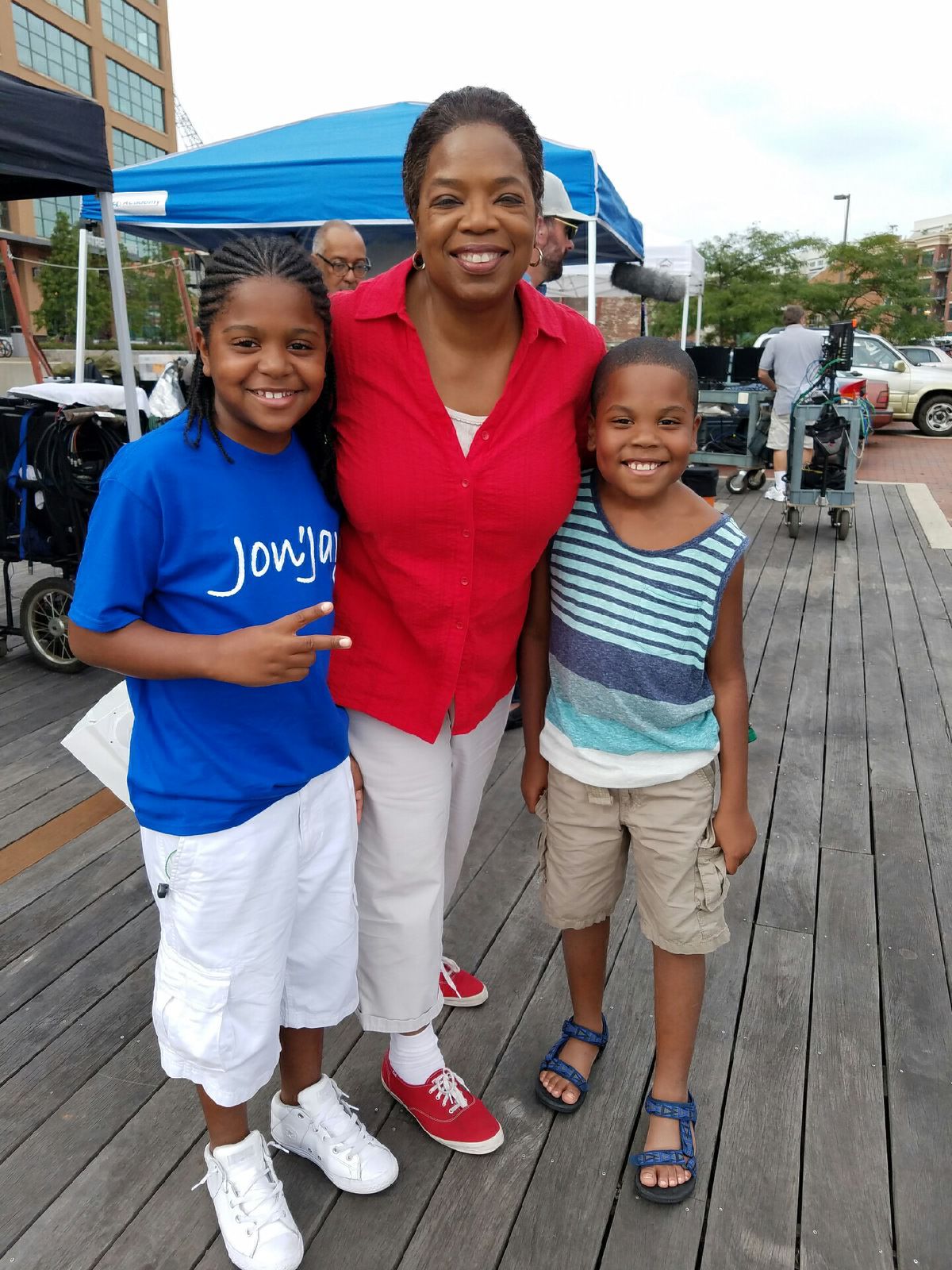 From left are Jaylon Gordon’s brother and fellow actor, Johnnie, with Oprah Winfrey and Jaylon in Baltimore, Md., during filming of ‘The Immortal Life of Henrietta Lacks.’ 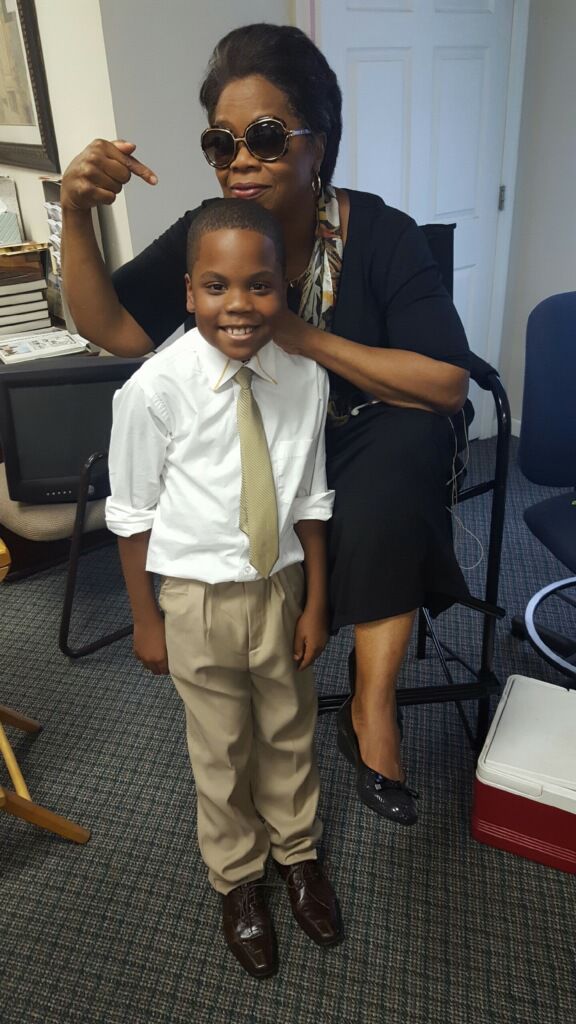 From left are Dallas resident and actor Jaylon Gordon and Oprah Winfrey in Baltimore, Md., during filming of ‘The Immortal Life of Henrietta Lacks.’

From left are Jaylon Gordon’s brother and fellow actor, Johnnie, with Oprah Winfrey and Jaylon in Baltimore, Md., during filming of ‘The Immortal Life of Henrietta Lacks.’

From left are Dallas resident and actor Jaylon Gordon and Oprah Winfrey in Baltimore, Md., during filming of ‘The Immortal Life of Henrietta Lacks.’

An actor with six years of film and TV work under his belt could easily have lost his sense of awe about his famous co-stars.

Not 10-year-old Jaylon Gordon of Paulding County, who recently worked alongside longtime film and TV megastar Oprah Winfrey on the upcoming HBO movie release, “The Immortal Life of Henrietta Lacks.”

Gordon, son of Felicia and Johnnie Gordon of Dallas, has acted in movies and TV series since he was 4. He portrays the son of the title character’s daughter played by Winfrey.

The movie, which will premiere Saturday, April 22, on the HBO cable TV channel, will feature Gordon as Alfred, the son of Winfrey’s Deborah Lacks. Rose Byrne and Courtney B. Vance also star in the adaptation of Rebecca Skloot’s “critically-acclaimed, bestselling nonfiction book of the same name.”

Filming was done in the fall in Baltimore, Md., and Atlanta, reportedly at Tyler Perry Studios where Winfrey’s TV series “Greenleaf” is filmed.

According to HBO’s web site, the “Henrietta Lacks” story is “told through the eyes of Henrietta Lacks’ daughter, Deborah Lacks” who is seeking information on her mother, described as a “poor black tobacco farmer” whose cells became “vital for developing the polio vaccine, cloning, gene mapping, in vitro fertilization, and more.”

“The film chronicles her search, along with journalist Rebecca Skloot, to learn about the mother she never knew and understand how the unauthorized harvesting of Lacks' cancerous cells in 1951 led to unprecedented medical breakthroughs, changing countless lives and the face of medicine forever,” the HBO site stated.

Though Winfrey became a TV and film star long before his birth, Jaylon said he became familiar with her through watching her “Oprah’s Next Chapter” TV series.

He said Winfrey was “outstanding, nice ... everything you would describe a good person, that’s what she was.”

“I worked with a lot of amazing people but this, by far, was the best experience,” Jaylon said.

“Every scene I worked on was fun. It was an honor to work alongside ‘Miss Oprah’ and (be) able to bring Alfred to life.”

Before “Henrietta Lacks,” Jaylon had parts in four movies, two TV movies and as the son of the title character in the 2016 BET TV series “Zoe Ever After,” starring singer Brandy Norwood.

Jaylon and brother Johnnie were part of the cast of the 2015 movie “Sons 2 the Grave.” Jaylon also will be in the cast of the upcoming Atlanta-based TV movie “The Real Georgia Peaches.”

Gordon said much of the “Henrietta Lacks” movie was shot at Johns Hopkins University in Baltimore.

“That’s where (Lacks) was hospitalized and got her cells taken,” Gordon said of the title character. “It was an amazing experience because I got to experience Johns Hopkins Hospital where it all took place.”

Jaylon said he preferred filming in Baltimore rather than Atlanta because “I like traveling.”

He also already has decided on at least one of his future occupations.

“I will forever be an actor until the day I retire,” he said. “This is my passion.”

Felicia Gordon agreed that her son’s “desire is to advance in the filmaking industry.”

“He wrote a paper on it last year,” she said of her home-schooled son. “Our job is to cultivate that.”

She added that Jaylon is currently in the cast of a play and will miss the premiere of the movie on HBO.

“He’ll be working that night, flexing his acting muscles,” she said.

According to his IMDb page, Jaylon’s credits also have included parts in the TV movies “The Christmas Swap” and “A Christmas Blessing,” and the feature movies “The Tree Widow,” “A Christmas to Remember,” and “The Good Book.”

Winfrey, a native of Nashville, Tenn., is scheduled to give the commencement address May 13 at Agnes Scott College in Decatur, where she will receive an honorary degree.

Free concerts and movie in Paulding next two weekends

Domino, a tribute band for singer Van Morrison, on Saturday will kick off a series of concerts by tribute bands this summer in Dallas.