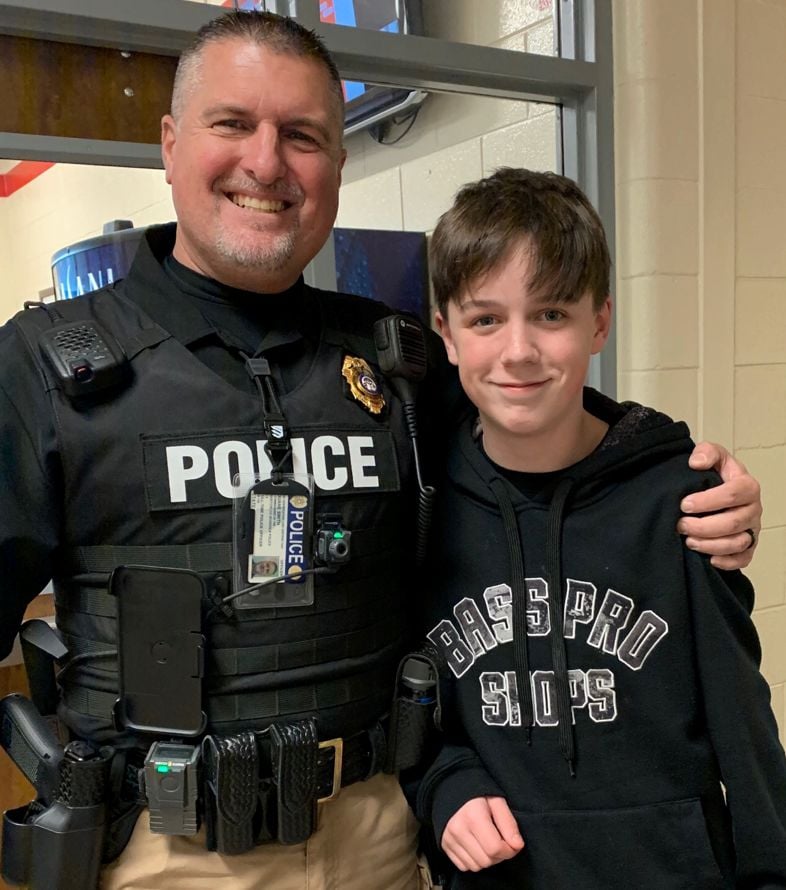 From left are School Resource Officer Duane Smith and Ethan Hamrick, 11, after Smith helped save the boy from choking on a bottle top at Red Top Middle School Tuesday, Dec. 3. 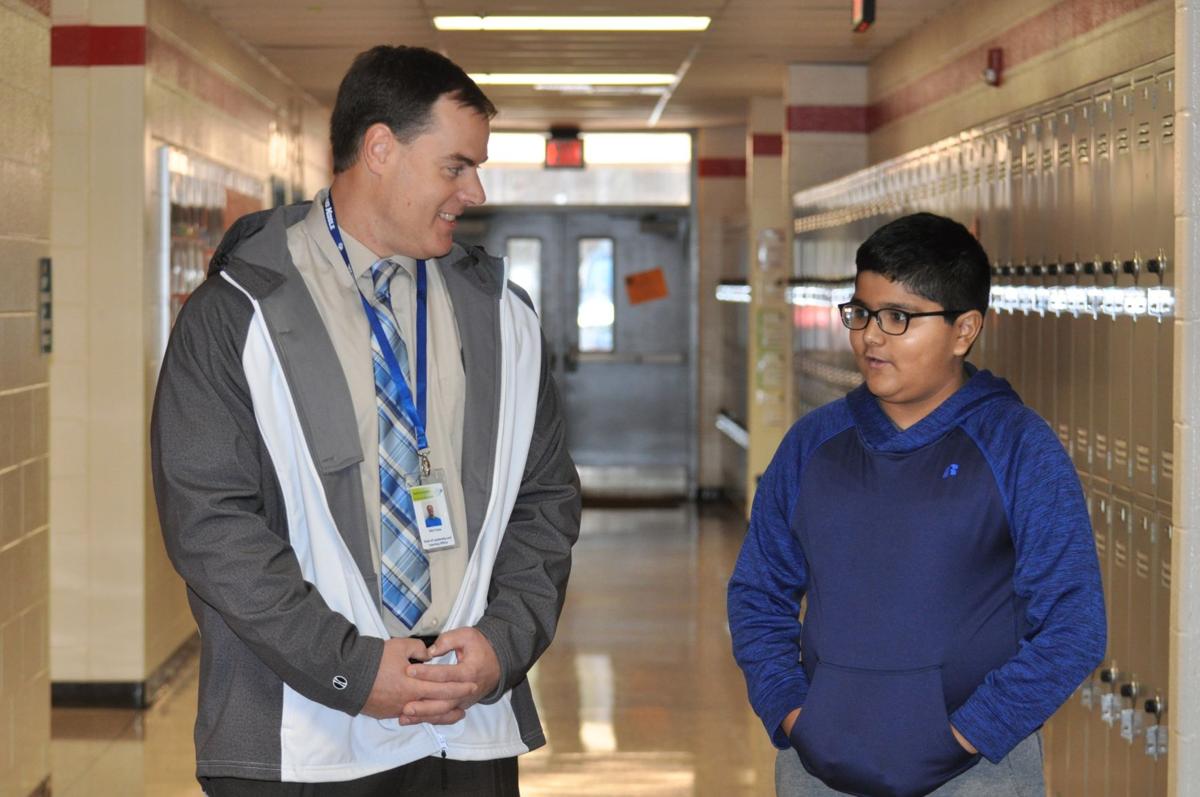 From left, Chief Leadership and Learning Officer Clint Terza talks with sixth-grader Rudra Parmar, who was the first to tell school leaders his friend was choking.

From left are School Resource Officer Duane Smith and Ethan Hamrick, 11, after Smith helped save the boy from choking on a bottle top at Red Top Middle School Tuesday, Dec. 3.

From left, Chief Leadership and Learning Officer Clint Terza talks with sixth-grader Rudra Parmar, who was the first to tell school leaders his friend was choking.

School Resource Officer Duane Smith may not have been at Red Top Middle School to help save a boy’s life recently if students at another school had been unruly the same day.

However, Woodland High School students’ behavior Dec. 3 prompted school administrators to allow Smith to be on-call for them after he traveled back to his regularly assigned school.

Smith was in the lunchroom at Red Top when sixth grader Ethan Hamrick began choking on a water bottle top.

His quick work to dislodge the cap that was cutting off the boy’s oxygen likely stopped further damage from occurring and helped save his life, Bartow school officials said.

“I’m not the type to sit around and wait for people,” Smith said. “If someone needs help, I’m going to help them.”

Smith said he served in the Marine Corps for 10 years before working in law enforcement for more than 20 years.

His work in a variety of law enforcement and private sector jobs included serving as a K-9 officer’s handler with the Cartersville Police Department and as an assistant police chief in another agency, he said.

Smith also worked as a school resource officer for a total of four years before returning to his job with Bartow County schools in August.

He is regularly assigned to Red Top Middle and three elementary schools, but is also a backup officer at Woodland High.

Smith began the day at Woodland in place of the high school’s regular officer, who was absent. Because it had been a “very quiet” day, he asked a school administrator to allow him to travel to Red Top to work but remain on-call.

About a half-hour after he arrived at Red Top, Smith said he was sitting with some teachers when the choking incident occurred.

Sixth grader Rudra Parmar had been eating lunch and he and Hamrick had been laughing when Hamrick started choking and gasping for air, said school system spokesperson Alisha Evans.

Parmar asked Smith and the teachers for help, and when the officer went to check on the boy he did not realize he had swallowed a water bottle cap — or where it was located in his throat.

“When I got to him, it got past his throat. I had to work it back up to get it (to his throat),” Smith said.

“I got him up and started working on him,” Smith said. “He was blue and he had gone limp on me.

“I tried to keep him from losing consciousness as I was working on him.”

The cap apparently had moved past Hamrick’s throat to his trachea and stopped air from entering his lungs.

“I thought it was food. He did regurgitate some (food) with me doing the abdominal thrusts,” Smith said.

“Some food came out on the floor and I thought I had it. Then one of the teachers yelled, ‘This kid said he just swallowed a water bottle cap.’

He said he knew if he “thrust him on the back, there was a possibility that the cap could have moved further down and not up.

“So, I performed about 14 abdominal thrusts and I believe that turned the cap sideways, allowing him to breathe a little.”

He said two school nurses were on duty that day but he was trained to be a first-responder, which includes knowing how to perform such emergency procedures as CPR or the abdominal thrusts he used on Hamrick.

“They had called on the radio for a nurse but I started doing my thing while they were calling in the ‘cavalry,’ per se,” Smith said.

After Smith dislodged the cap, head school nurse Annette Lively treated the boy while an ambulance was being called, Evans said. He was transported to an area hospital, treated and released.

Smith said he did not think about removing any of the many pieces of equipment he wears on his uniform on a daily basis as he worked to help the choking boy.

“The only thing that may have been obstructing was my body camera … (which) ended up coming off and hanging down, which was probably a blessing,” he said. “I guess, from the abdominal thrusts, it pulled my body camera off.”

Smith said he later met with Ethan’s grandfather, and spoke with his father on the phone, about the incident.

Ethan missed a couple of days of school but returned, Smith said.

“I see (Ethan) every day. He comes up and gives me hugs,” the officer said.