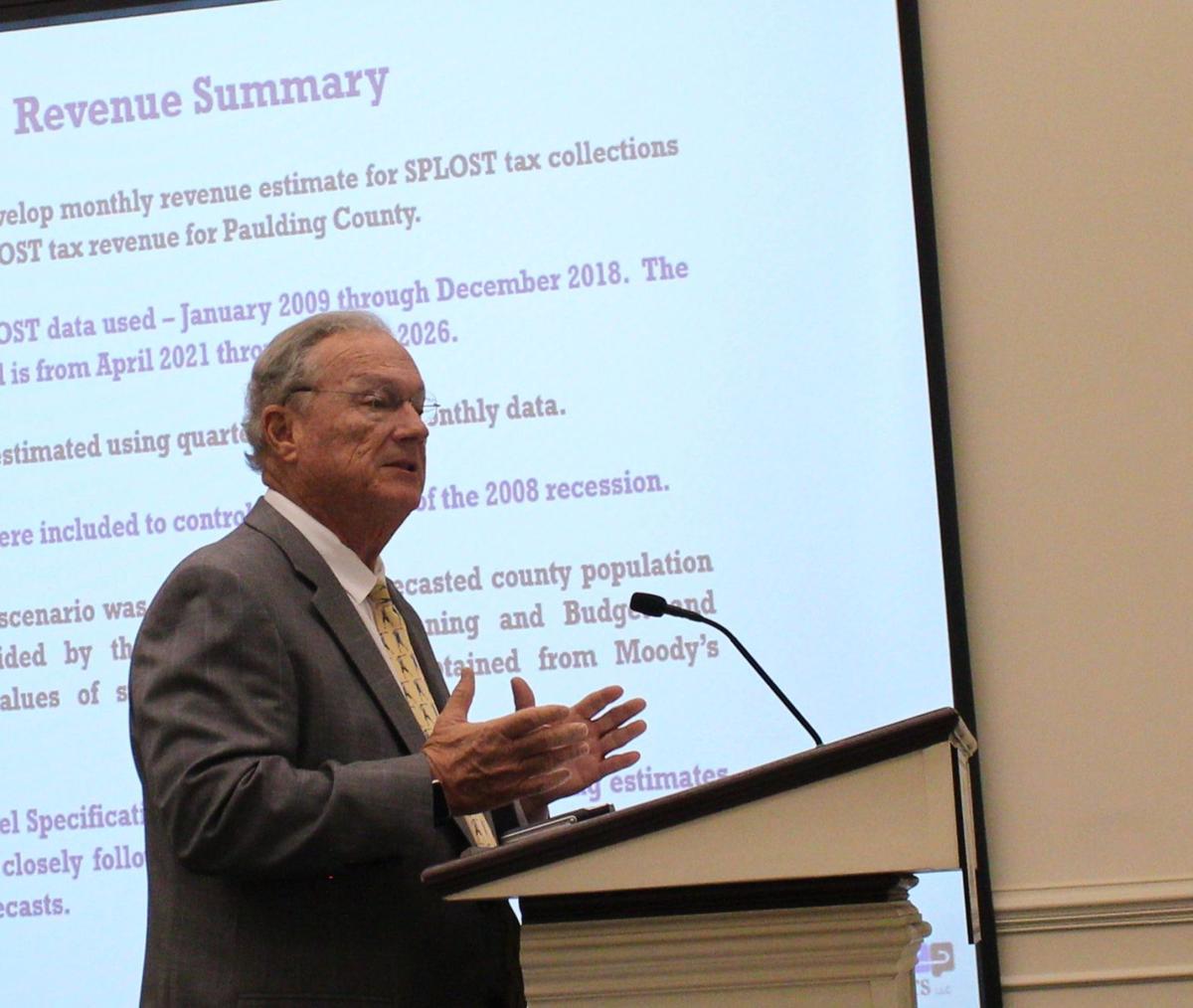 James Wilson of Education Planners LLC explains a plan his company developed using E-SPLOST funds for Paulding school district needs during a presentation to the county school board June 25. 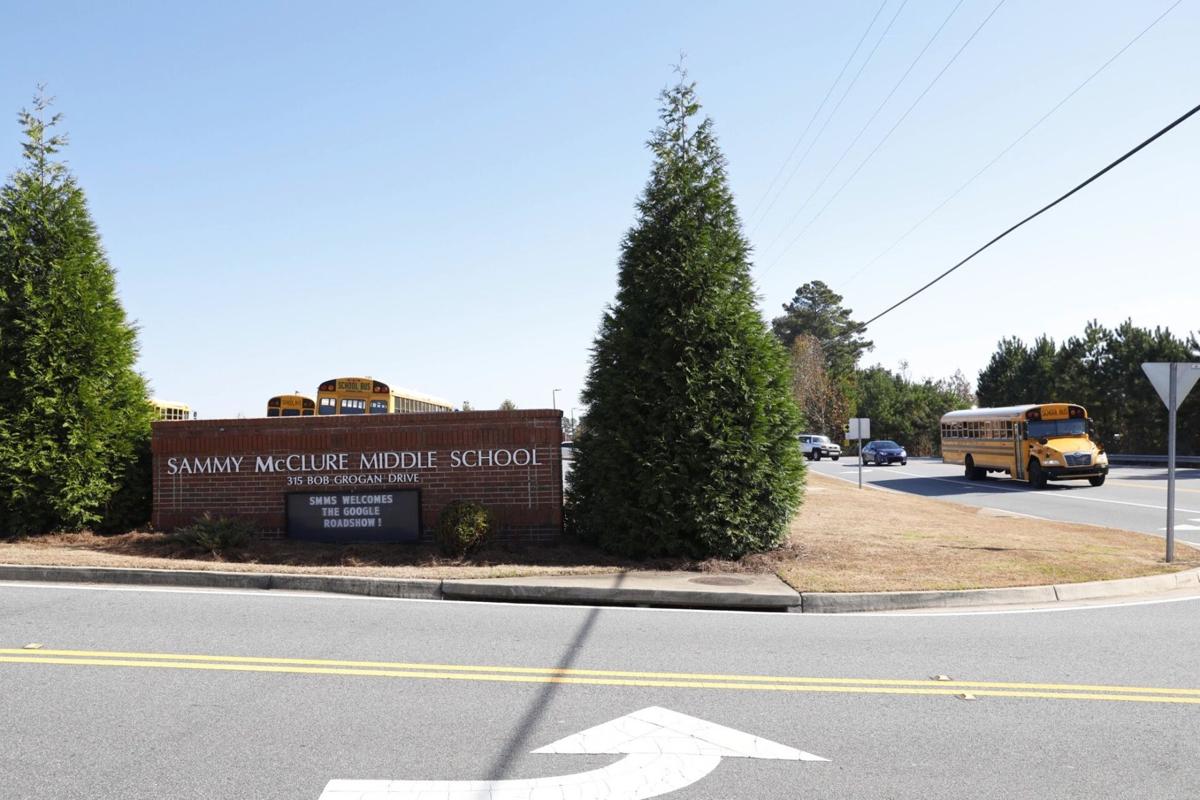 McClure Middle School will become part of North Paulding High School under a plan voters approved Nov. 5 for $30 million in bond financing for construction of a new middle school to replace McClure. 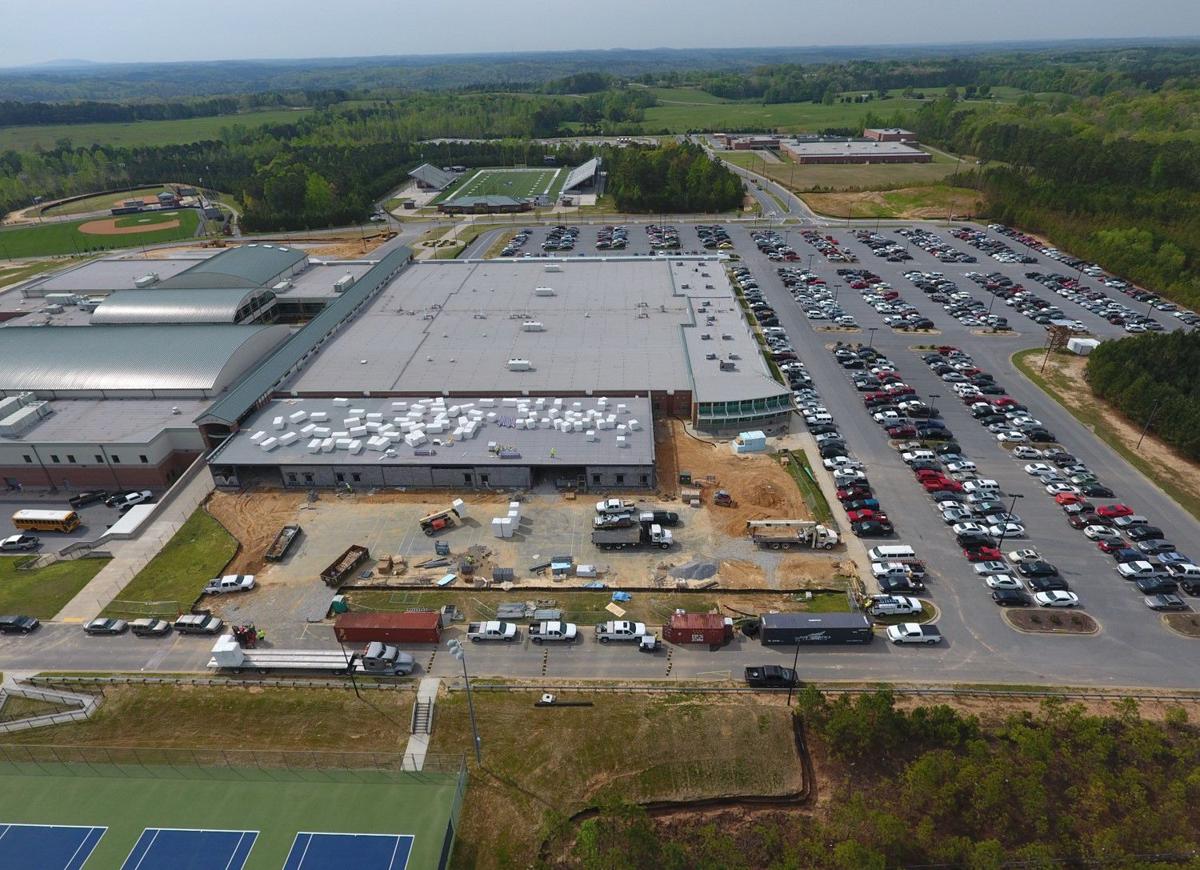 This $2.7 million addition to North Paulding High School was completed in 2017. 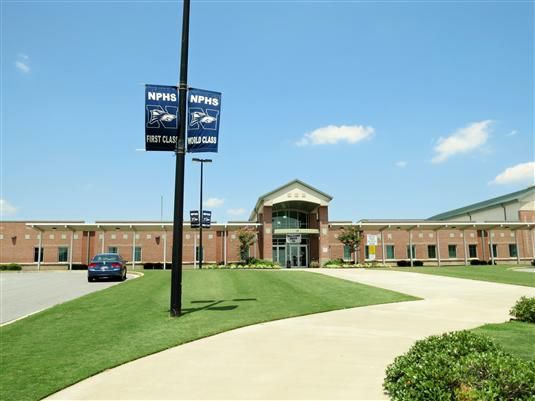 A recent county survey showed more than half of all residential building permits issued between 2010 and 2018 were in the attendance zone for North Paulding High School.

James Wilson of Education Planners LLC explains a plan his company developed using E-SPLOST funds for Paulding school district needs during a presentation to the county school board June 25.

McClure Middle School will become part of North Paulding High School under a plan voters approved Nov. 5 for $30 million in bond financing for construction of a new middle school to replace McClure.

This $2.7 million addition to North Paulding High School was completed in 2017.

A recent county survey showed more than half of all residential building permits issued between 2010 and 2018 were in the attendance zone for North Paulding High School.

About 4% of Paulding County voters decided a sales tax for schools should continue through 2026 and the county take on millions in additional bond debt.

But the money from the 1% sales tax, which can produce up to $120 million over five years, will positively affect both property owners and students in the rapidly growing county for years to come, school officials said.

Paulding County’s Newsmaker of the Year in 2019 was renewal of the 22-year-old Special Purpose Local Option Sales Tax for education, often abbreviated as E-SPLOST, and approval of an accompanying $30 million bond issue.

The money from both is planned to meet a range of needs — from a faster start of construction of badly-needed new and additional school space, to paying off debt from bond financing used to build schools in the past two decades.

The state constitution was amended in 1996 to provide E-SPLOST as a way for school districts to fund new construction and upgrades other than from local property taxes.

However, an E-SPLOST must be approved by voters, is limited to 1%, and can only be used for capital needs or to pay off bond debt — not for administrative costs or salaries.

Paulding’s current E-SPLOST was first approved in 1997 and renewed in later years as the county’s population grew rapidly in the 1990s and 2000s. The sales tax voters approved Nov. 5 will be E-SPLOST 6, school officials said.

After little to no enrollment growth during the economic downturn in the latter part of the 2000s and early 2010s, schools primarily in north and northeast Paulding began seeing enrollment increases in recent years.

North Paulding High School now is rapidly approaching an enrollment one-third larger than any of the other four county high schools, officials said.

However, school district officials said they believed construction of a new middle school would cost considerably less than a new high school.

The school board then decided in July to place the question before voters Nov. 5.

The bond issuance will allow the Paulding County School District to “jump-start” construction immediately on the high-priority projects, Otott said.

He said district officials found that a new high school would have cost up to $65 million, which prompted them to consider “other options” to handle the expected growth in enrollment at McClure and North Paulding, he said.

He said, “We asked our school community to help identify the best approaches to address capacity needs in the most critical areas of our county.”

“We believe this plan does exactly that by constructing what will become a new McClure Middle School. The current facility, meanwhile, will become an annex building for North Paulding High School.

“By building one middle school, we will provide critical capacity relief at two schools,” he said.

Board members John Dean and Chairman Jeff Fuller said the district needed to find a way to pay off its bond debt — $86 million alone from a 2014 bond issue — or it will continue a cycle of using sales tax to pay back loans rather than fund school construction.

Board member Glen Albright said he hoped voters “do realize” that E-SPLOST is a “necessary thing” for today’s money needs as well.

“This is the money that’s going to be used to build the new schools as needed and do necessary renovations at other schools,” Albright said.

In September and October, Otott hosted informational meetings about the E-SPLOST at all middle schools and high schools.

On Nov. 5, more than 72% of the vote was given to approving its renewal for five more years after the current sales tax ends in 2021.

Paulding County School Board Chairman Jeff Fuller said he was “excited that the citizens voted to support our students” but would have preferred that more than 6% of registered voters participated in the referendum.

“It was an overwhelming majority,” Fuller said.

“It’s going to allow us to move forward and continue to address the growth issue that we’re having, along with hopefully being able to continue paying down the SPLOST debt and eventually get out of debt by the goal of 2034.”

Otott called the vote “a great result for the students of Paulding County.”

“Beginning in 2021, we will continue the E-SPLOST for five years bringing debt reduction — which keeps property taxes lower — new construction, renovations, and a wide range of capital improvements for our schools.”

But not everyone was happy with the result. A Facebook user identified as Catherine Kennedy Hornsby disputed claims on the school district’s page that renewal of the sales tax was “keeping property taxes low.” and was “overwhelmingly supported.”

“Very low voter turnout,” Hornsby wrote. “It got passed because most people knew it was going to go through one way or the other — so what was the point of even showing up to vote?”

The sales tax can produce up to $120 million — though $113 million is projected to be raised, Paulding school district officials said.

Almost $41 million of the sales tax proceeds will be used to pay off part of the debt from a past bond issue — which school district officials noted many neighboring counties require property owners to pay off.

The remaining $79 million will be used for a variety of capital needs.

A group of construction projects were given highest priority, including the new northeast Paulding middle school for $32.5 million.

Other projects given highest priority for funding in the plan included:

♦ $12.3 million for classroom additions to Moses Middle School and Roberts and Russom elementary schools to help relieve projected overcrowding at schools surrounding them.

♦ About $16 million for renovations at district schools.

YEAR IN REVIEW: Paulding ready for new highway and schools but liked familiar leaders in 2019

Paulding kept its city leadership in place and saw millions of dollars’ worth of governmental and infrastructure projects either open, begin c…