Locked up: No masks, sanitizer as virus spreads…

How to navigate unemployment

Hallie Schiff, seated center, is pictured with boys and girls from the East Lake Family YMCA after donating basketball shoes to them in 2018. 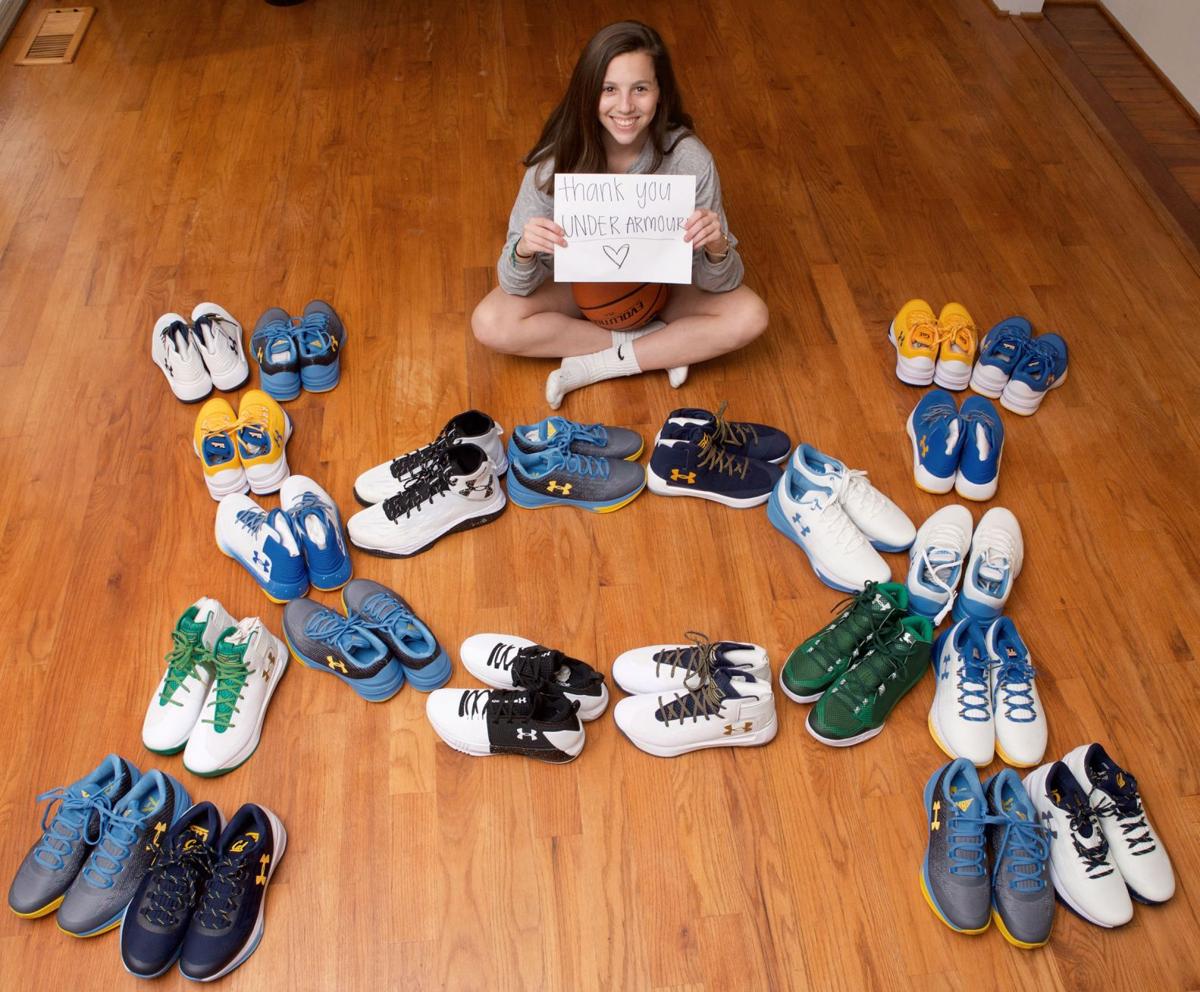 Hallie Schiff thanks Under Armor for donating 50 pairs of basketball shoes in 2016 with both a thank-you sign and a set of shoes replicating the company’s “UA” logo. 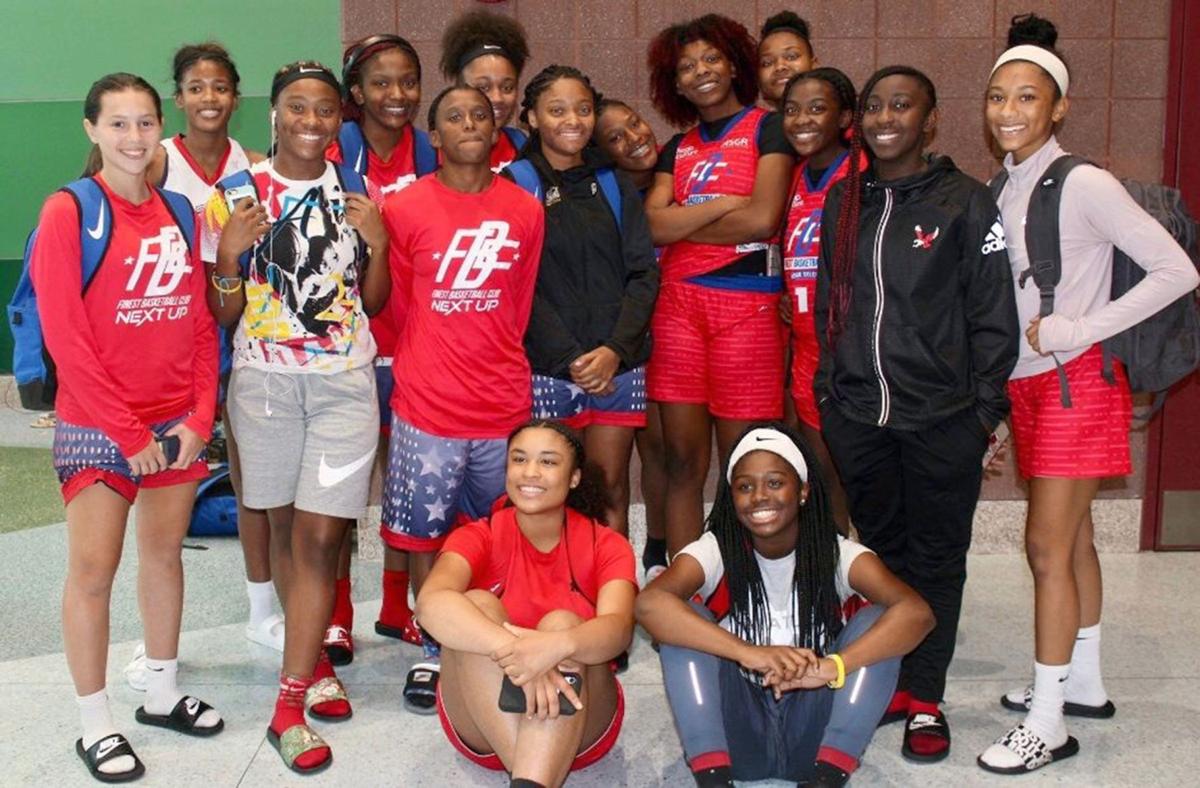 Hallie Schiff, seated center, is pictured with boys and girls from the East Lake Family YMCA after donating basketball shoes to them in 2018.

Hallie Schiff thanks Under Armor for donating 50 pairs of basketball shoes in 2016 with both a thank-you sign and a set of shoes replicating the company’s “UA” logo.

For Hallie Schiff, what started out as a one-time bat mitzvah project has blossomed into an annual drive to donate 100 pairs of basketball shoes to underserved children.

For each Jewish child’s bar or bat mitzvah, her or she either receives gifts or opts to donate those presents, usually money, to a charity of his or her choice. But when the Westminster junior was 12, she decided to take it a step further by donating new or gently used basketball shoes instead.

“I wanted to do something actually connected to my life so I could participate more in it,” said Hallie, who turns 17 in April.

The Morningside resident got the idea after she suffered a Jones fracture in her left foot while playing in a travel league soccer game in the seventh grade. A Jones fracture is a break in the bone that runs along the outside of the foot, in the area of the base and shaft of the fifth metatarsal, according to the Medical News Today website.

“I’m pretty sure I was dribbling the ball and my foot was turned a bit because I was about to kick the ball and a girl stepped on it while it was turned,” Hallie said. “I got a Jones fracture, so I was in a boot and crutches for three or four months. So it was hard for me to play sports during that time. I still did even though I wasn’t supposed to.

“After that happened, that was when I realized I wanted to play basketball more and not play soccer as much, not travel soccer. And I realized how important it is to have good shoes because if you don’t, you’re more susceptible to a serious injury.”

Her mother, Cathy Schiff, said, “The doctor said, ‘If you didn’t have on good shoes, the break would have been much worse and you would have needed surgery and pins.’ Her foot would never have been the same.”

During her first year, Hallie was going to donate the shoes to children in Arapahoe, North Carolina, the town where she went to Camp Seafarer from age 8 through 14 or 15. But after learning a man there had already made similar donations, she instead decided to donate them to a local YMCA, choosing the East Lake Family YMCA in DeKalb County.

Each year she’s donated about 100 pairs of shoes to the Y, and that’s the goal again this year. In 2016 athletic apparel company Under Armor donated 50 pairs but hasn’t since then. Hallie said she has reached out to Under Armor and Nike reps to request more shoes and is hoping they will help.

Each June, when she delivers the shoes to the Y, she also plays basketball with the children there “to have a better sense of community and feel more connected to them instead of just giving something and not feeling connected to it.”

“It makes me realize the impact of actually giving back and seeing how happy (the children) are,” she said. “ … They all say thank you, but there’s always a few that are really, really excited and give me a hug a bunch of times. This little girl one time was surprised she actually got to keep the shoes. There was another girl who came back and kept hugging me. It makes me feel good that it actually matters to them.”

“She has those leadership skills and she’s extremely caring and always open to all the kids,” Stuckey said. “She will talk to the kids that are shy. She will walk up to them and engage with them.”

Cathy Schiff said she’s proud of her daughter “in so many ways.”

“Not only is she giving back to the community, but she’s giving the opportunity for other kids to play the sport she loves the most in the world and not have to worry about being able to play with bad shoes,” she said. “… She doesn’t just want to collect them and take them but be with the kids, ask them about their lives, play with them.

“It makes me incredibly proud and I love that she doesn’t want to just give the shoes but get to know the kids and learn about their world and teach them some basketball and have an opportunity to play with them. As a parent it’s a great feeling she wants to give back. … I’m also proud of the leader she’s become and her compassion and caring to help people of all types in the world.”

Cathy said they want all shoe sizes, especially larger ones for teenagers. As they’re donated, Hallie checks them, disinfects/cleans them and puts new shoelaces in them if needed. To donate shoes, contact Hallie at 470-558-6578 or hallieschiff@westminster.net.

DeKalb County officials are informing the public of plans that are in place, and precautions already taken, at schools, senior citizen facilit…

Axelrod: I'd be shocked if Trump doesn't do this

How deadly is coronavirus? That's complicated

Smerconish: Coronavirus is proving our resiliency

Fear, panic as women navigate pregnancy during a pandemic

Man runs 100 miles in one day for coronavirus relief

Her daughter, who beat medical odds at birth, tests positive for virus