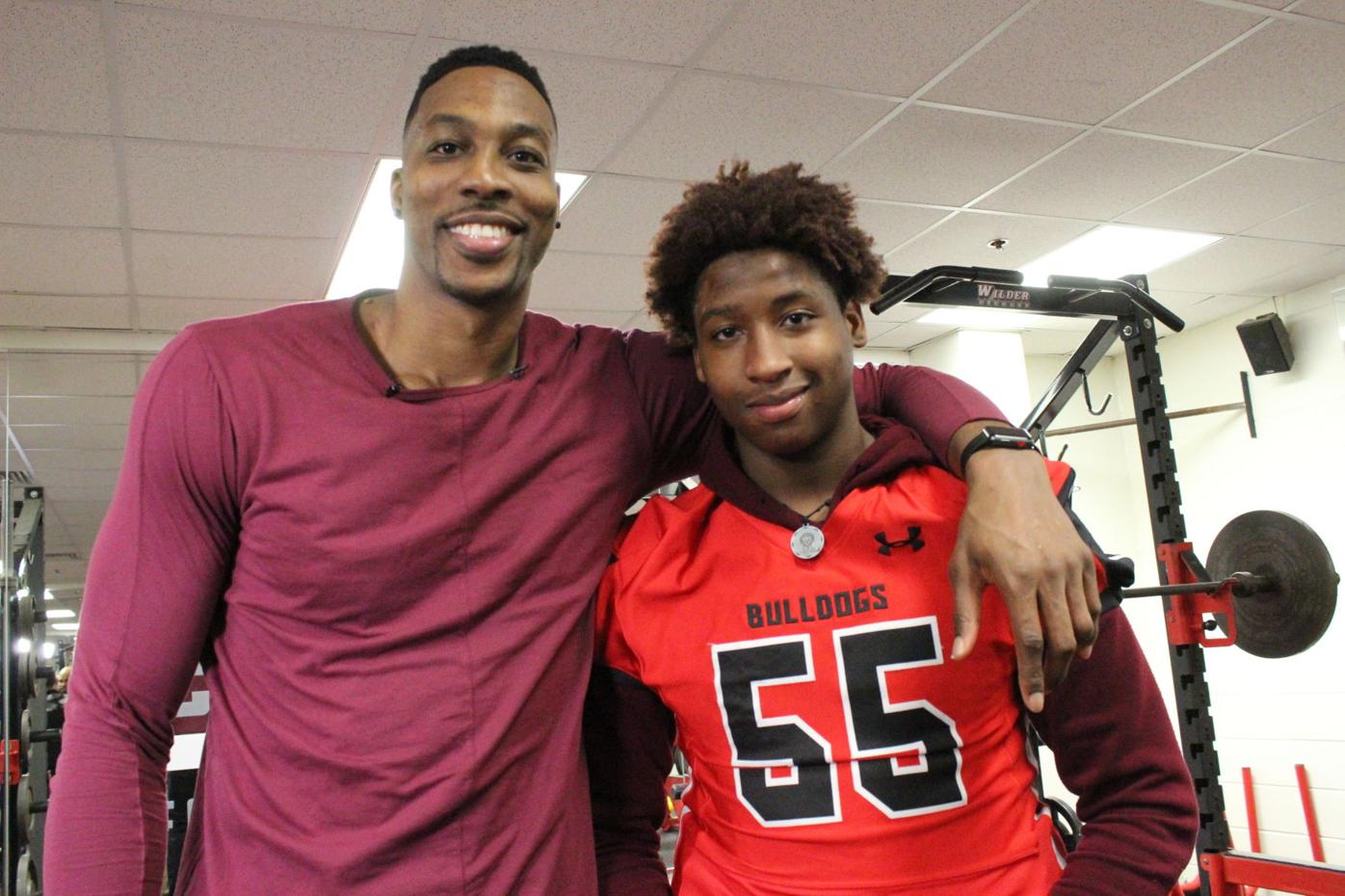 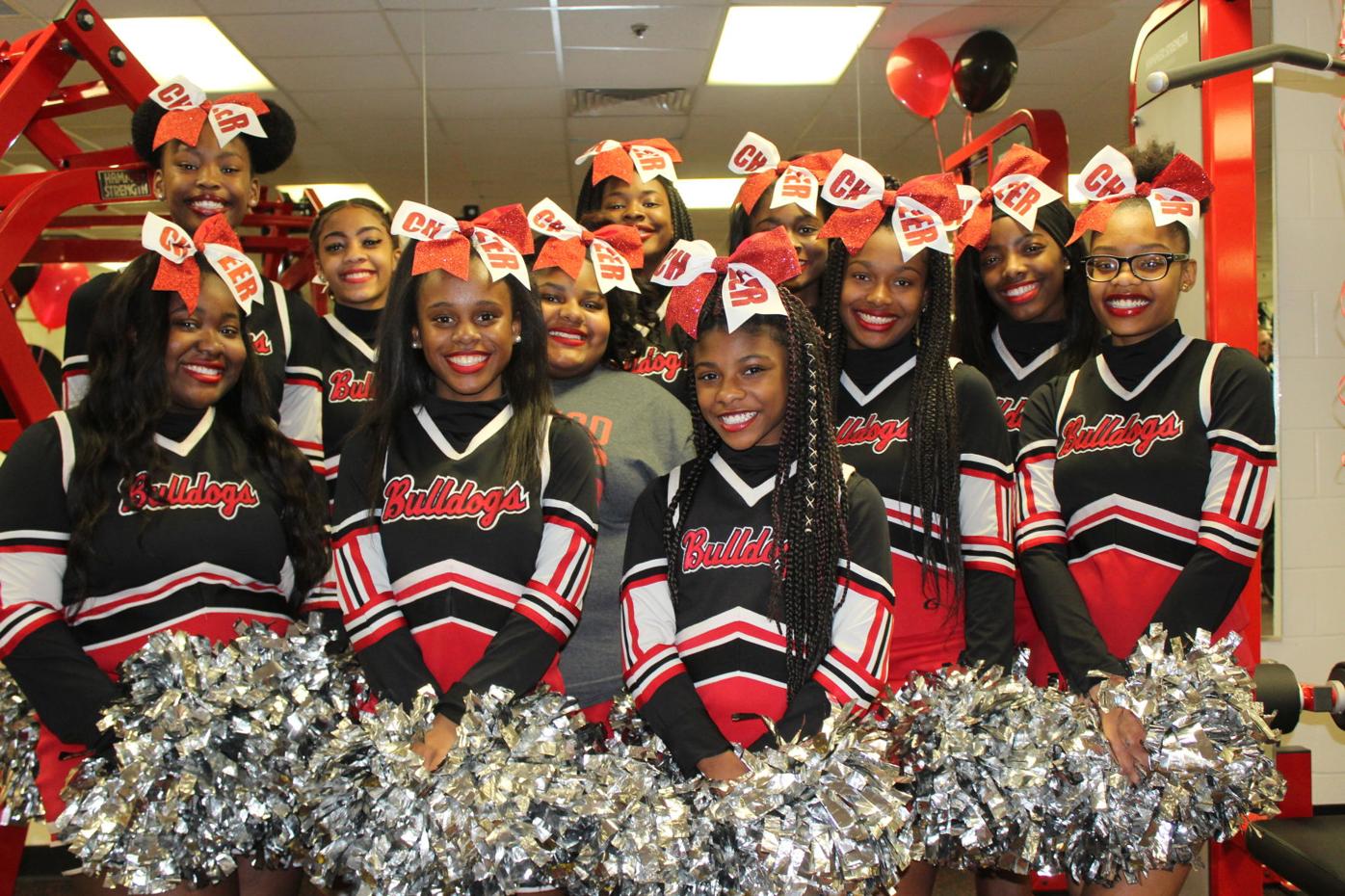 At Tri-Cities High School in East Point, cheerleaders await the appearance of a special guest to open a revamped weight room. 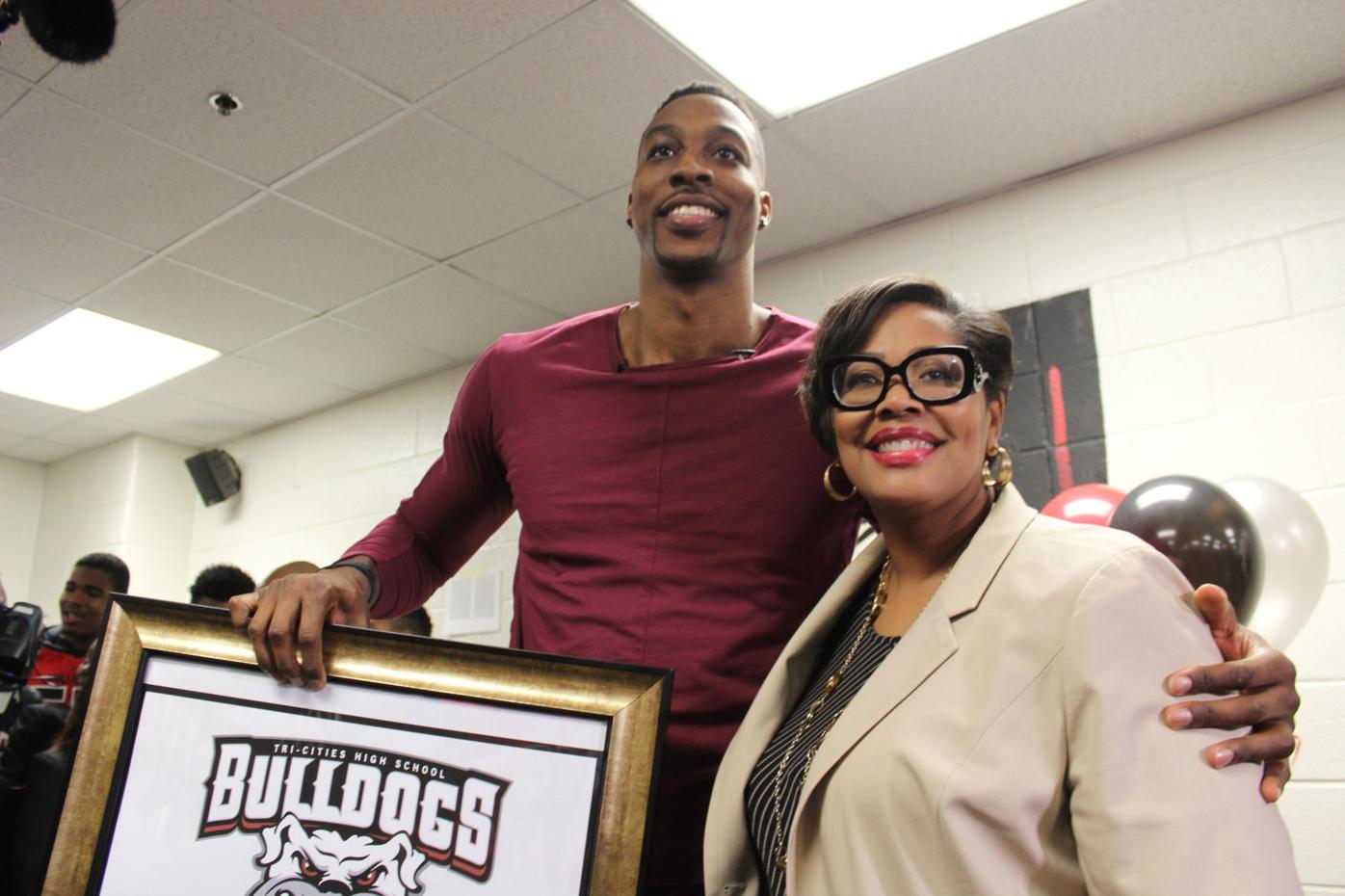 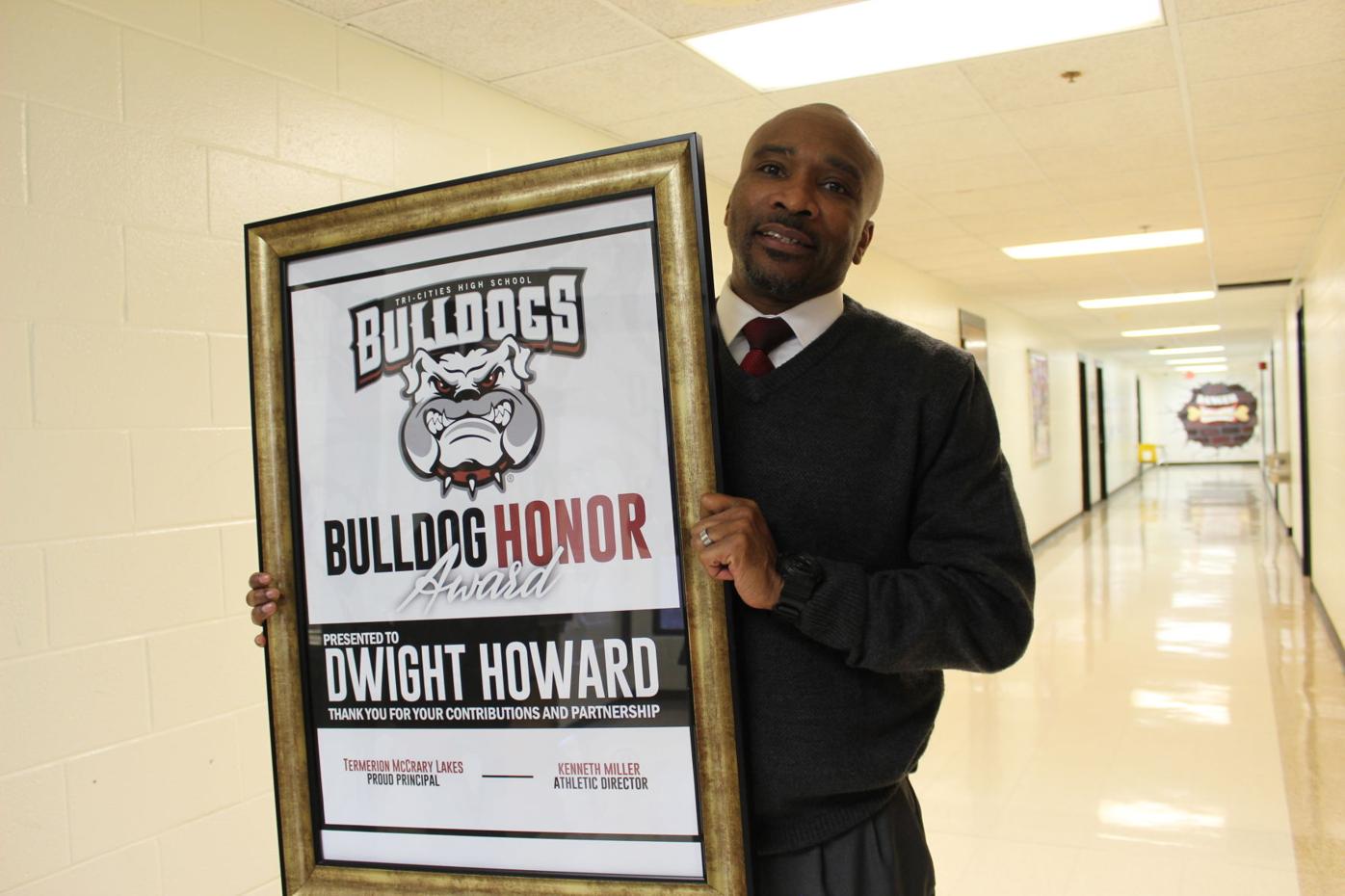 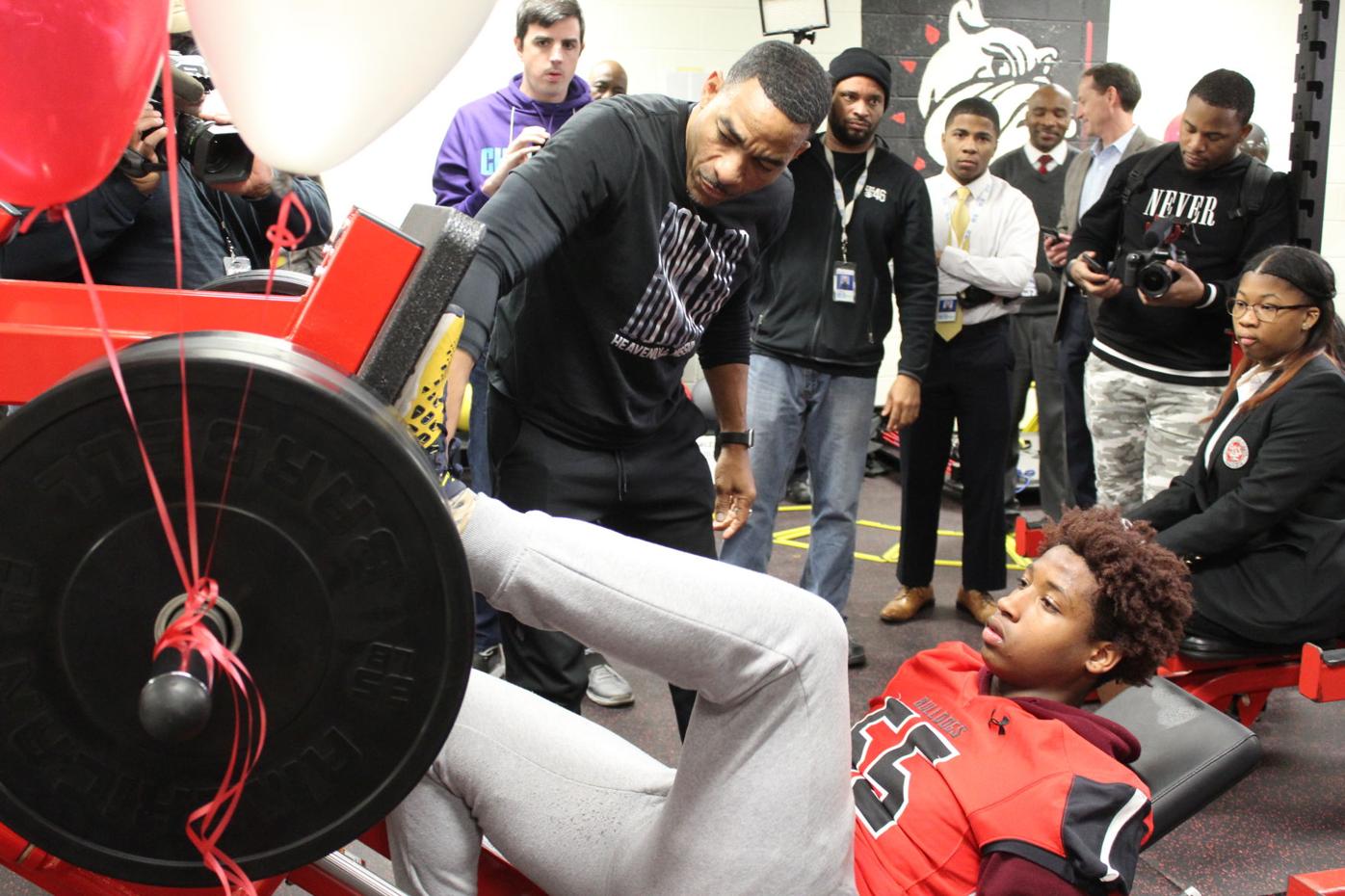 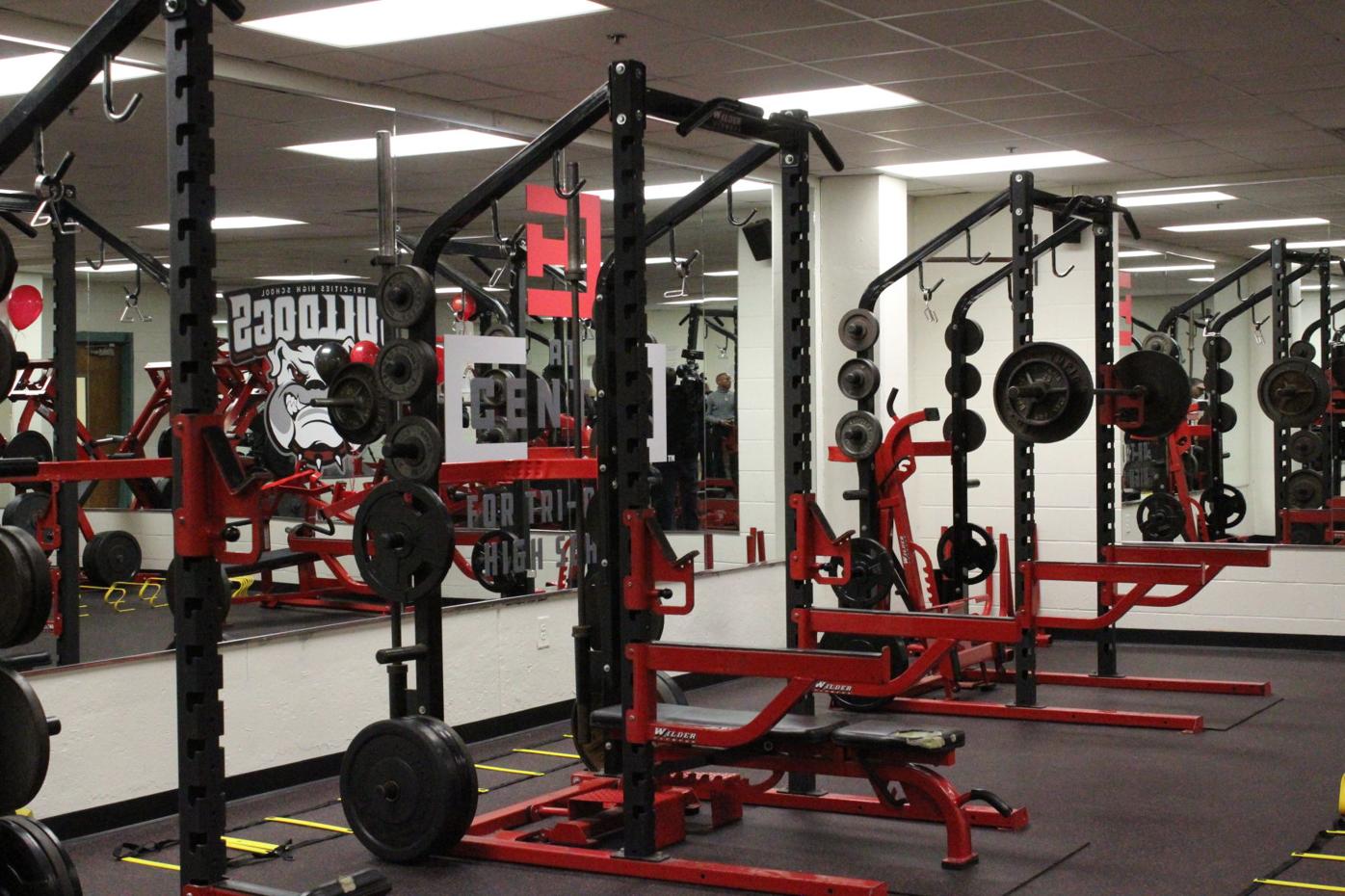 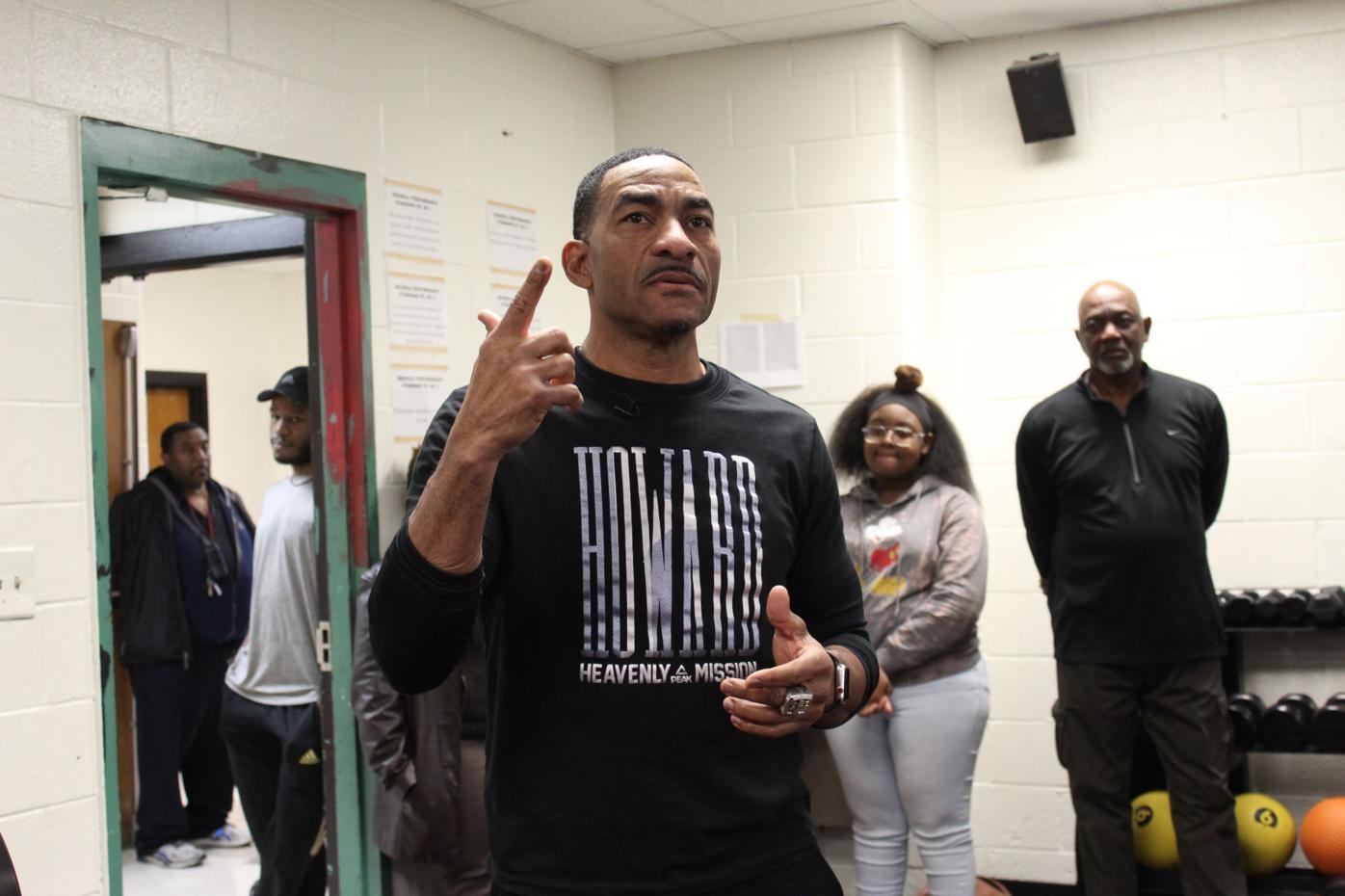 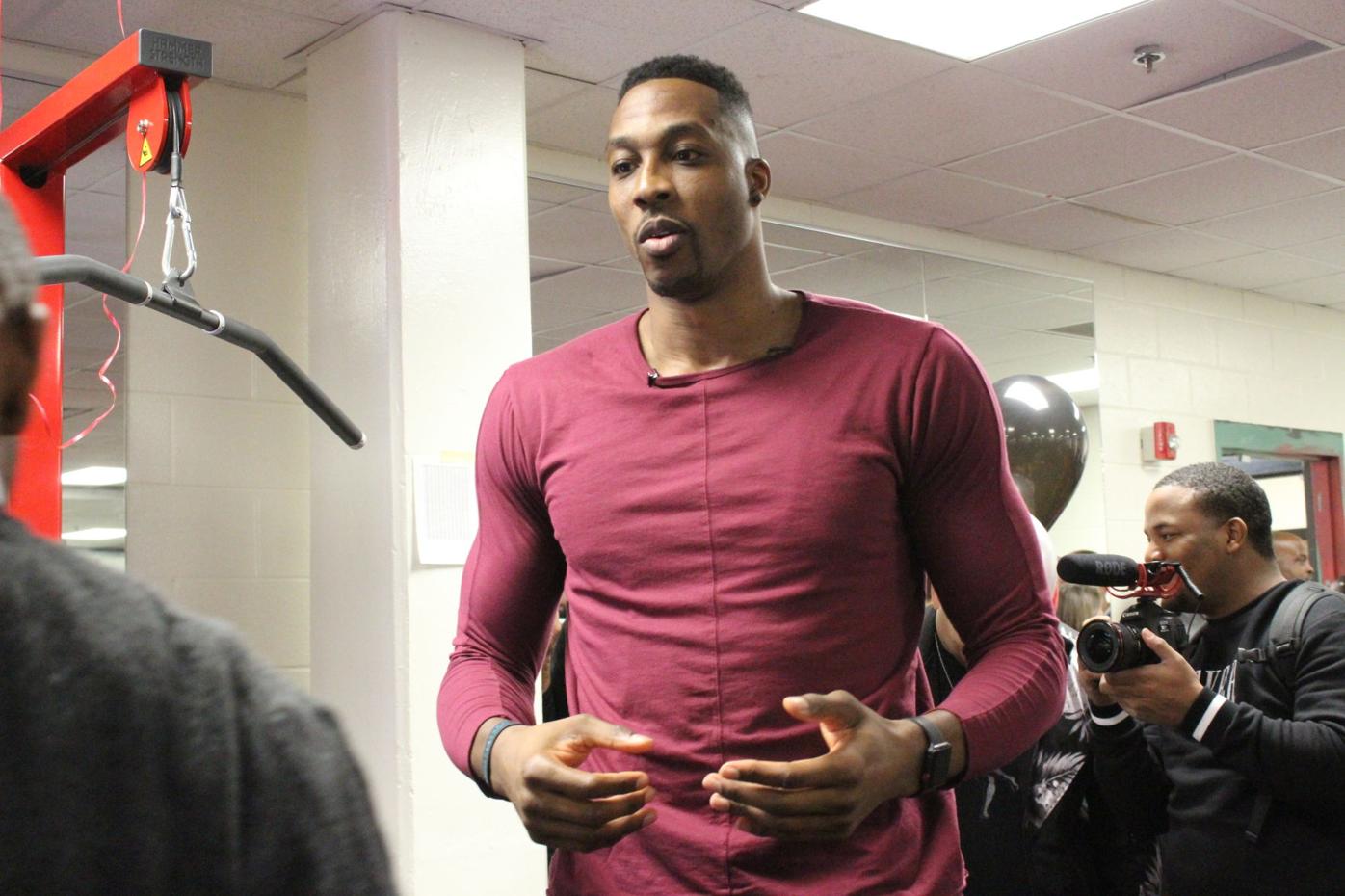 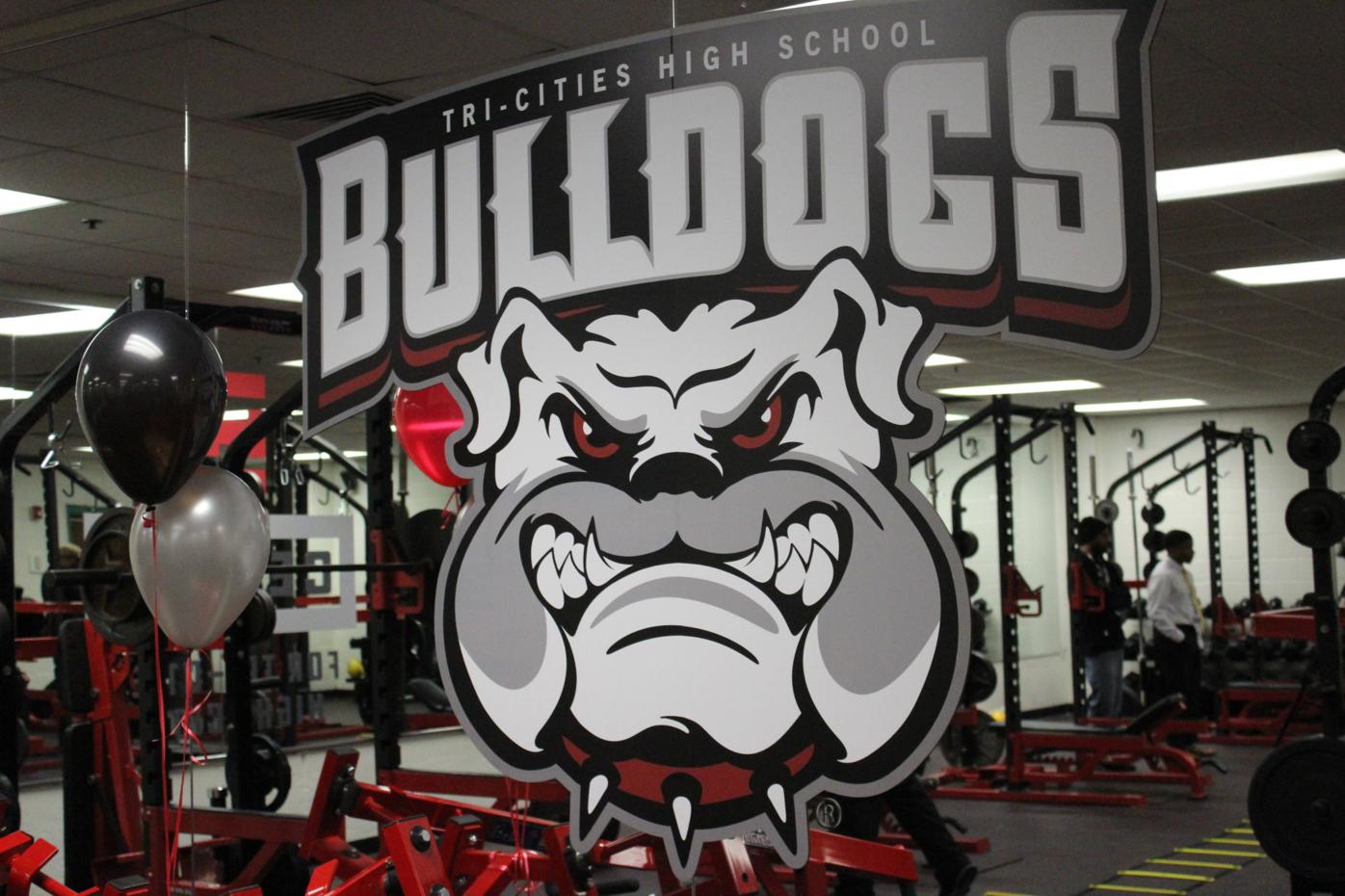 The Tri-Cities High School mascot is emblazoned on a new mirror at the East Point school, part of a $50,000 upgrade donated by Charlotte Hornets center and former East Point resident Dwight Howard and opened Jan. 30. 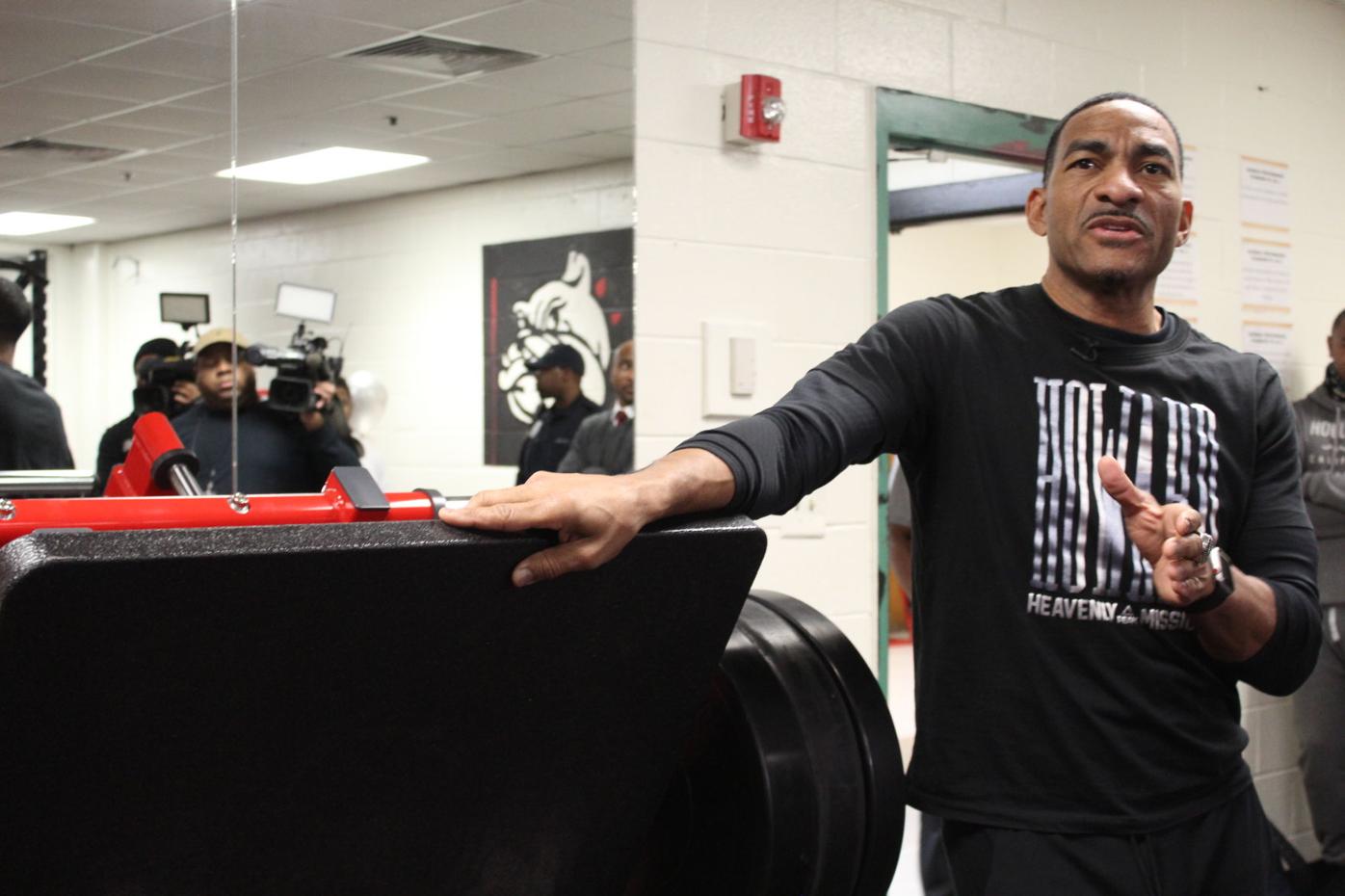 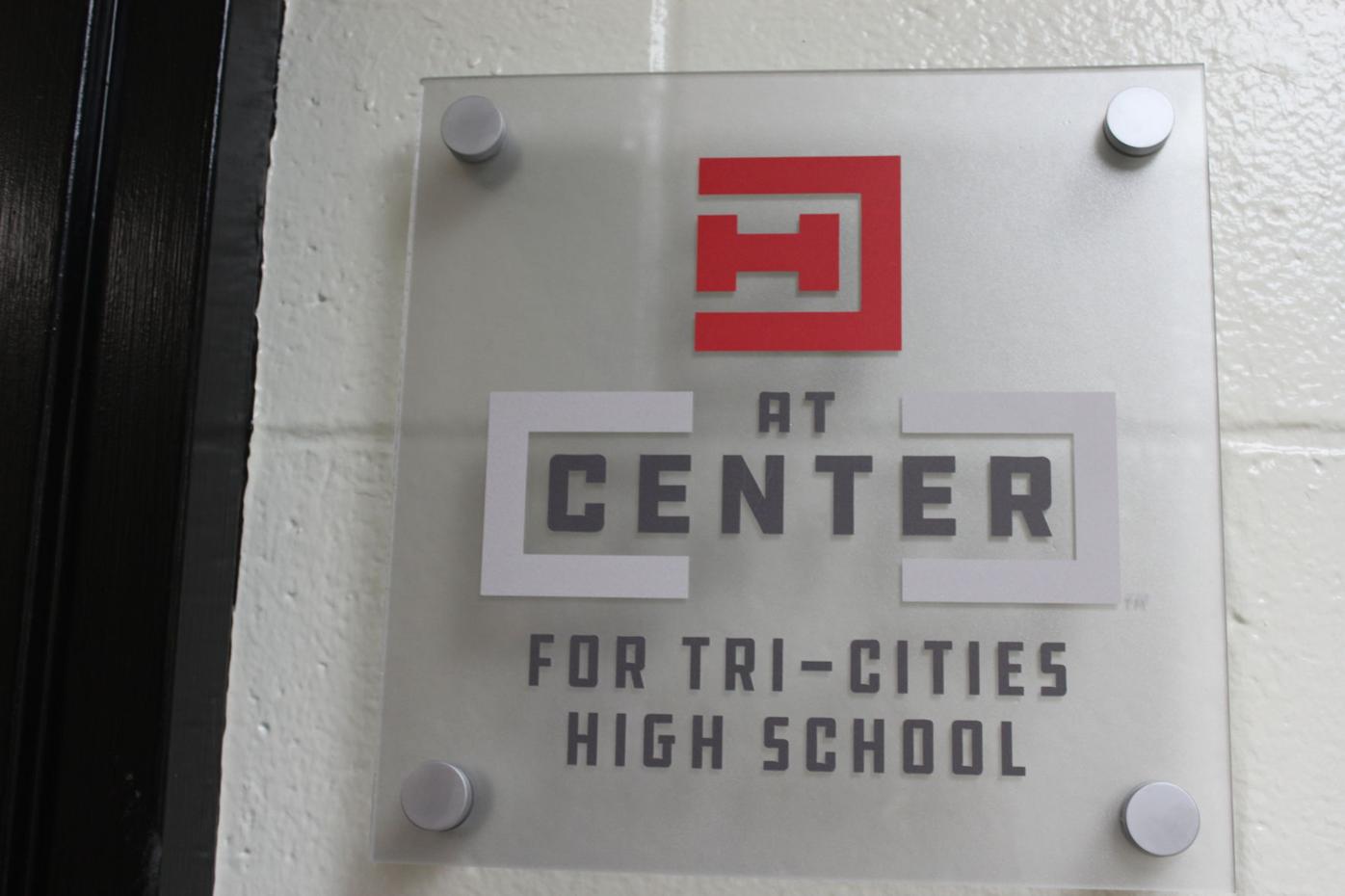 At Tri-Cities High School in East Point, cheerleaders await the appearance of a special guest to open a revamped weight room.

The Tri-Cities High School mascot is emblazoned on a new mirror at the East Point school, part of a $50,000 upgrade donated by Charlotte Hornets center and former East Point resident Dwight Howard and opened Jan. 30.

Now a center for the Charlotte Hornets, who beat his old team Jan. 26, the 32-year-old NBA star said he saw a need for his $50,000 donation in weight room equipment.

“I came here to work out and there was not a lot of equipment here for you guys,” he said to about 50 student athletes Jan. 30 during the upgrade’s unveiling. “I felt really bad about it because I grew up in the same places you grew up in. It was disappointing to me to see you guys didn’t have the right equipment to work out, to be inspired to want to go to the next level.”

Howard said he was glad to be blessed enough to be able to give back.

“I want to see all y’all make it,” he said. “I want you to fulfill your purpose.”

The philanthropist, who works with the Dunwoody-based Arby’s Foundation and has his own D12 Foundation, encouraged his young listeners.

“Stay focused. Keep your hearts and your minds in the right direction and don’t allow nobody or nothing to stop you from chasing your dream,” Howard said.

He called the 840-square-foot room with its 12 training stations and new mirrors, “the legacy of Tri-Cities” and encouraged athletes to preserve it for future players.

Howard’s trainer Ed Downs said all Bulldog teams – including the cheerleaders – can benefit from the equipment, including Downs’ personal favorite, a VertiMax jump training station.

“The reason why Dwight chose this type of equipment is because everybody can use it, not just the football guys,” Downs said. “This is the same stuff that Dwight uses.”

Miller presented Howard with an award commemorating the occasion.

Students were aware the weight room had been under construction since last summer, the release stated, but Howard’s presence at its reveal was a secret.

Howard, who was also in town to launch a DonorsChoose literacy crowdfunding effort for Atlanta elementary school students, said he will return to Tri-Cities this summer.

His dad, Dwight Howard Sr., runs basketball camps during the second and third weeks of July.