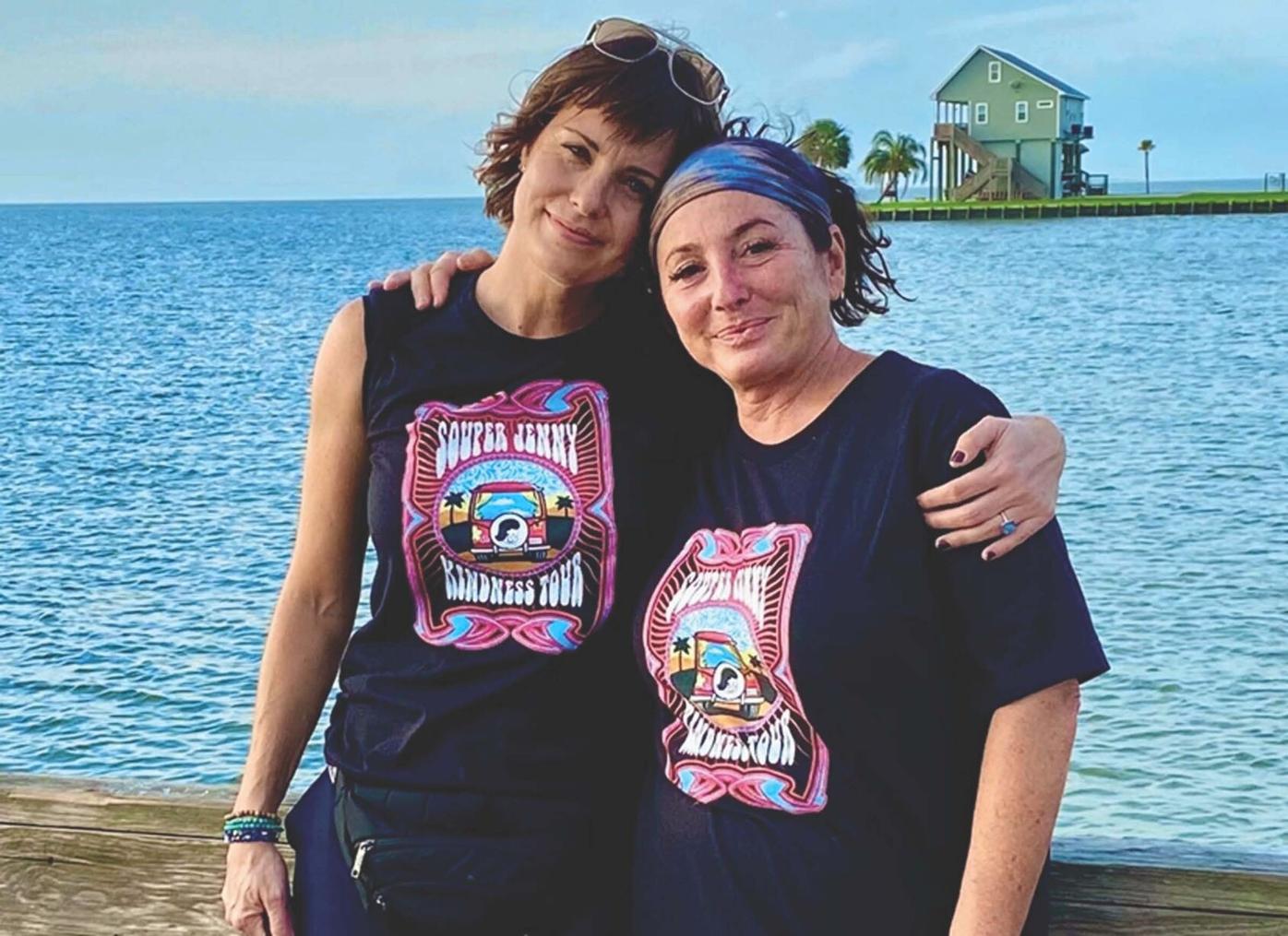 From left, Meg Gillentine and Jenny Levison take a break during the Souper Jenny Kindness Tour. 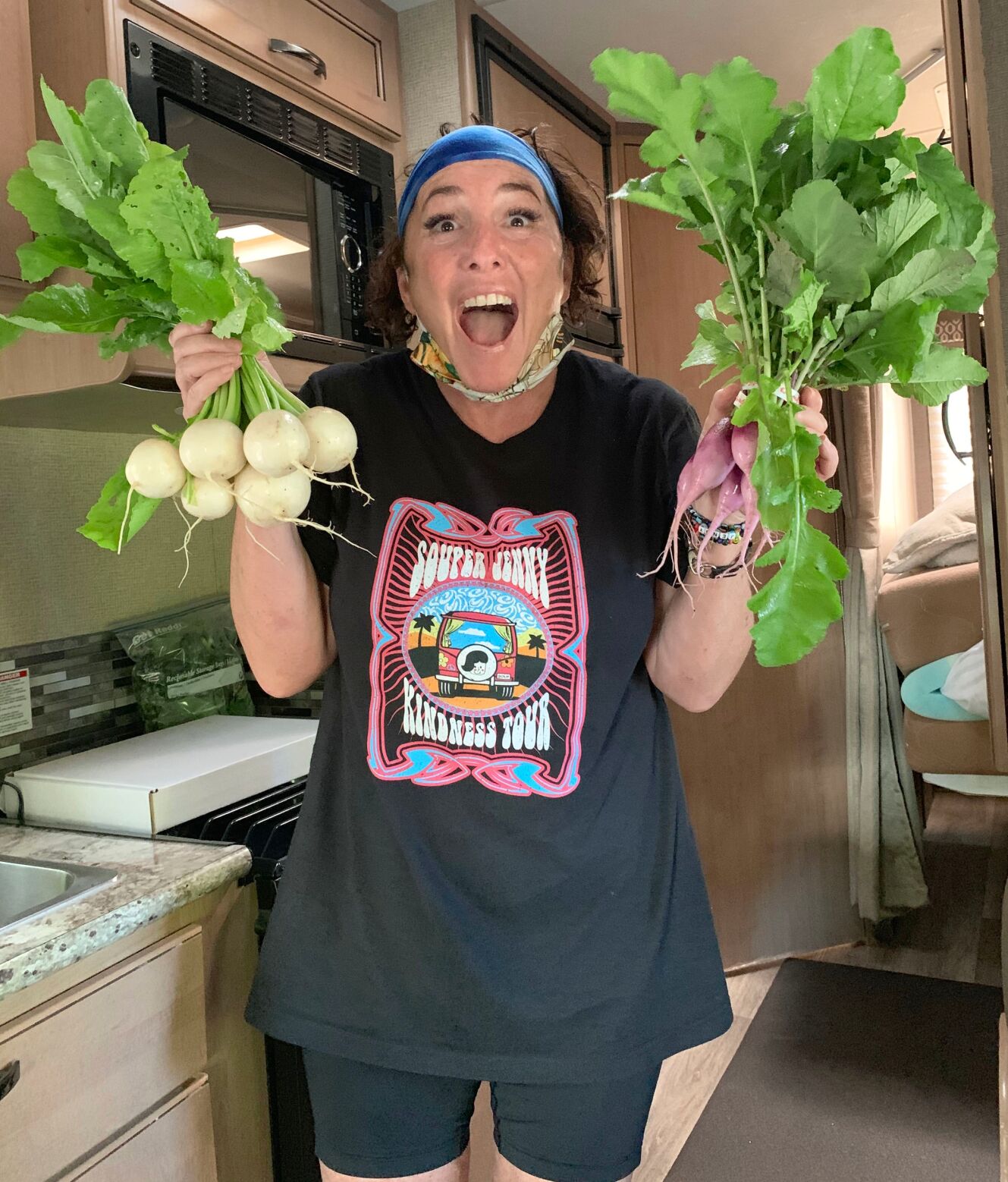 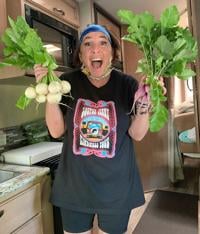 Jenny Levison hams it up with some onions and radishes during the Souper Jenny Kindness Tour.

From left, Meg Gillentine and Jenny Levison take a break during the Souper Jenny Kindness Tour.

Jenny Levison hams it up with some onions and radishes during the Souper Jenny Kindness Tour.

As the country continues to deal with the COVID-19 pandemic, Jenny Levison is spreading joy across the nation with the Souper Jenny Kindness Tour.

Levison, the head chef, founder and owner of Souper Jenny, a group of five metro Atlanta restaurants in Brookhaven, Buckhead, Decatur, Roswell and west Midtown, embarked on the six-week tour Oct. 13 with her friend, Meg Gillentine, driving cross country in an RV.

In each town they stop in, they’re either buying fresh produce from local farmers and making soups and then giving them to local residents and/or doing other random acts of kindness if there are no farms in those communities.

“We’re in a very small town,” Levison said in an Oct. 20 phone interview from Van Horn, Texas, which has a population of just under 2,000. “There’s a boys’ orphanage here. We’ve made a pot of soup and dropped it off. We were in Austin, Texas, and we bought out a local baker of all of her products, with the agreement that she could then turn around and offer it to her customers for free.”

Levison said she thought the tour was a good idea given struggles Americans have had during the pandemic.

Gillentine, an actress who performed in Broadway shows for 15 years, has been unemployed since the pandemic hit, so she was eager to join Levison, a longtime friend, on the tour.

“Any opportunity to do some good with her, I always jump in head first,” said Gillentine, whose husband and son are joining them on the tour. “When she asks me to jump, I say ‘How far?’ It’s such a tricky time right now. … (While unemployed), instead of sitting at home twiddling my thumbs, I wanted to do something. Service is very close to my heart and it gives me the same energy performing does.”

After the outbreak started in metro Atlanta, Souper Jenny’s west Midtown location, from April through July, hosted a monthly drive-thru event where residents who needed food could pick up a bag of it.

On the tour, Levison said the response from farmers and others they’ve visited has been “incredible.”

“The people are surprised,” she said. “Everyone’s sort of struggling right now. People have been so kind in return and so appreciative.”

Gillentine added, “Everybody’s been so grateful and surprised. We’ve also gotten looks of, ‘Oh my gosh, what are you guys doing?’ We bought out a sweet girl’s booth in a farmer’s market in Houston. She had gotten up that 4:30 in the morning. She was completely overwhelmed with the generosity.”

One of the tour stops was Lake Charles, Louisiana, a town hit hard by Hurricanes Laura and Delta in late August and early October, respectively.

“We bought groceries; we made soup. People are really struggling there,” Levison said.

Gillentine added, “We found a church that was having an outdoor service and a drive-thru line donating items like food and clothing. We went up to the pastor and said, ‘Can we join your drive-thru?’ He said, ‘Yeah, of course.’”

Levison said they plan to drive to California before turning around and taking a different route on the return to Atlanta. For more information about the tour and how to help, visit https://bit.ly/37A9lsK.

One Atlanta couple is giving back by opening Evopia, a new nonprofit in southwest Fulton County to help the community in a variety of ways.