This Sandy Springs Police Department cruiser was hit by a drunk driver, but the officer driving it was outside of the car, helping another vehicle, and not hurt. 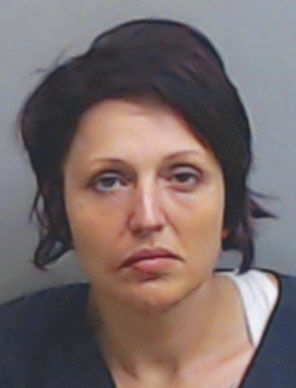 A drunk driver’s vehicle hit a Sandy Springs police car over the weekend, according to police.

Sunday at about 2 a.m., the cruiser was hit while on the side of Interstate 285 near Glenridge Drive, but the officer driving it was uninjured because the officer was helping another vehicle at that time.

The driver, Yekaterina Curry, 30, of Douglasville, was arrested. Curry was charged with driving under the influence, habitual violator, driving with suspended license, failure to maintain lane and move over violation. Georgia’s Move Over Law mandates that drivers move over one lane or slow down when an emergency vehicle is flashing lights and parked on the side of the freeway.

In a message posted to the Sandy Springs Police Department’s Facebook page, the department warned drivers to move over one lane when officers are on the side of the highway assisting other vehicles.

“In case you need a visual, here is a reminder of why we ask motorists to move over an extra lane when we are working on the highway,” the message stated in part.

Curry will have to pay for damages to the police cruiser, police said.

“It’s a reminder that we want people to move over when they see blue lights and don’t drive drunk,” Sgt. Samuel Worsham, a Sandy Springs Police spokesman, said. “Take an Uber.”

Police reports of note from the Sandy Springs Police Department, April 2 through 30.

A woman is charged in the death of a motorcyclist after she allegedly hit him in a wreck in Sandy Springs over the weekend.

Police reports of note from the Sandy Springs Police Department, April 4 through May 10.