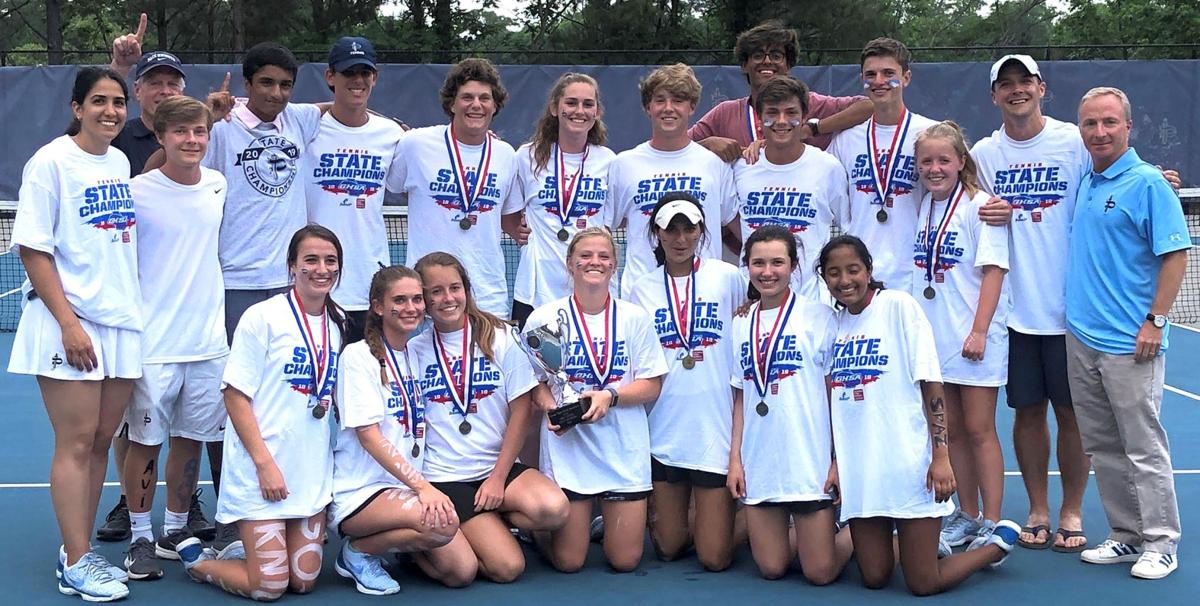 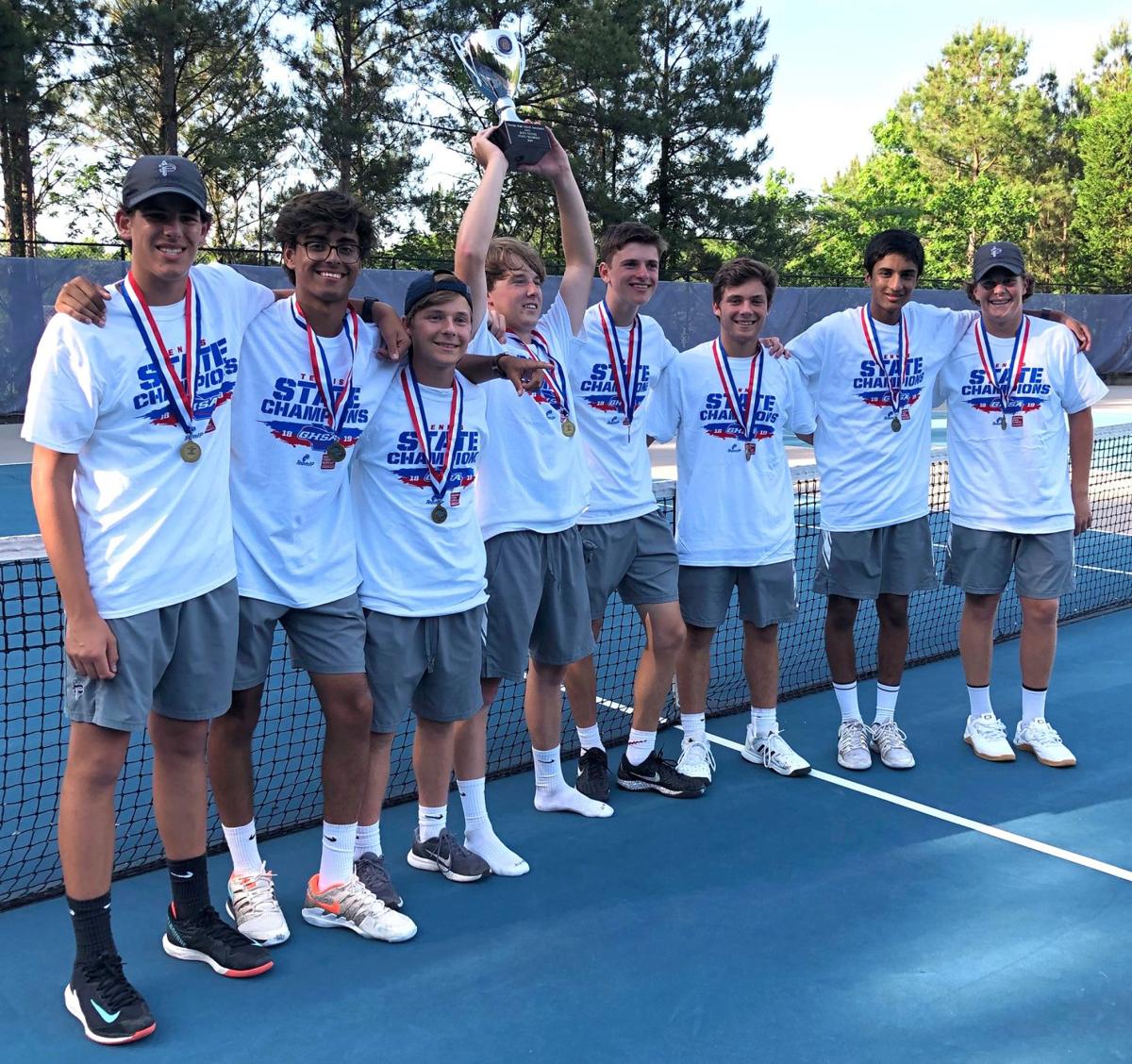 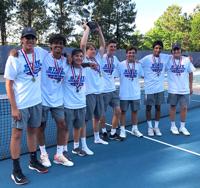 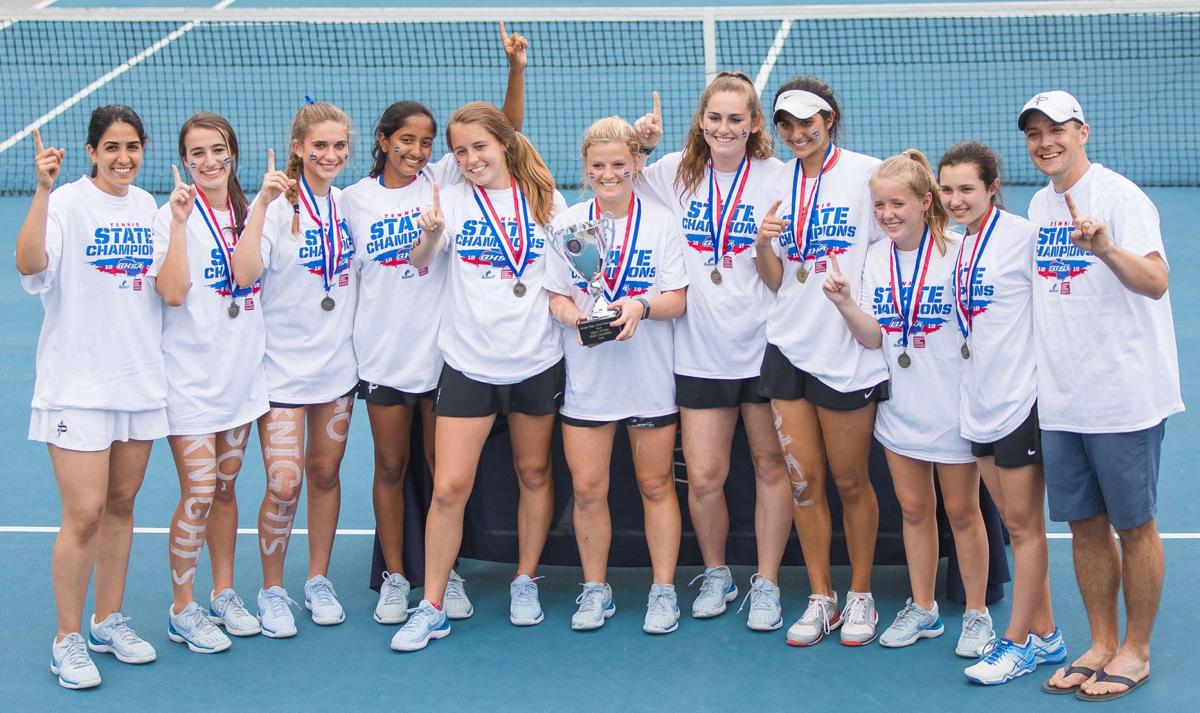 It was a stellar week on the tennis court for Pace as both its varsity programs won their respective Georgia High School Association (GHSA) Class AAA state championships.

The title matches were originally scheduled to take place May 4 at the Rome Tennis Center, but inclement weather postponed them to a later date.

First up was the Knights’ boys’ team which hosted Lovett May 6 in the finals. Pace was the top seed from Region 5AAA and had defeated Franklin County, Murray County, Benedictine and Jefferson to reach the finals. The Lions were the second seed from Region 5AAA and their postseason path included victories over Hart County, Calhoun, Brantley County and Westminster to qualify for the title match.

The Knights emerged with a 3-2 victory for their ninth boys’ team state title and first since 2002.

Pace’s doubles pairing of Matt Genser and Jody Elster won its match 6-1, 6-2 for the first team point. Singles player Neil Sashhi won his match 6-0, 7-5 for the Knights’ second point. Lovett responded with two points of its own to square the team competition up. The final contest to decide the state title was a doubles match won by the Knights’ unit of Charlie Hirsch and Rohan Jatar, 7-6 (5), 3-6, 6-3.

Next up was the girls’ championship match between the same two teams once again hosted by Pace, this time May 7. The Knights earned a 3-2 victory over the Lions for their fourth state title and first since 2001.

Pace was the top seed from its region and defeated Hart County, Murray County, Savannah Arts and North Hall to reach the finals. Lovett was the second seed and earned postseason victories over Franklin County, Calhoun, Pierce County and Westminster to qualify for the championship match.

The first match to conclude was a singles’ match with Lovett’s Emma McHale defeating Pace’s Bay Brinkley 6-0, 6-0 to give the Lions a 1-0 advantage. The Knights responded with a victory from their doubles unit of Grace Funston and Rekha Sashti, which defeated Caroline Fleetwood and Kate Pritchard 6-3, 4-6, 6-3 to even up the team competition.

The Lions took a 2-1 team lead when Breanna Patel won her match over Kate Jonas 6-0, 6-3. Pace tied the team competition at 2 with the doubles win from the unit of Sidney Funshon and Leah Mautner over Kasey Goldenberg and Campbell Tomlin 1-6, 6-3, 6-3.

The state championship came down to the singles match between Avi Arora from Pace and Lovett’s Hunter Pulliam. Arora swept the match with a 7-6, 7-6 victory to secure the title for the Knights.

“We are so proud of this team,” Knights’ girls head coach Matt Marsico said. “We spent a lot of time this season working on the mental side of the game, so to see how well they handled having to restart the championship match was wonderful. We knew that we had a team that was capable of competing from a talent perspective, but we also knew that Westminster and Lovett would have great teams as well. Our matches with both of those teams were so close that it really was just a few points that separated us in the end, and we could not have handled those deciding moments any better.”

Marist’s girls’ team won the Class AAAA state title with a 3-2 home win over North Oconee May 7. Its the 24th state title for the War Eagles in program history and first since 2014. Marist earned its first point when Anya Nelson defeated Lindsay Tulenko 7-5, 7-5.

“Even though all competitive matches were entertaining, the first singles (match) was a thriller,” War Eagles head coach Jose Gregory said. “Each team’s highest positioned player battled it out at the end in a match that went back and forth and represented the very best of high school tennis. We were thrilled when our freshman girl managed to win 7-5, 7-5.”

Marist’s second point came from the doubles unit of Ansley Reynolds and Emma Fletcher on its 6-4, 7-5 victory over Amanda Bounds and Charlotte Hudson. The War Eagles took home the state title when their doubles’ team of Dylan Rose Elledge and Kate Gerrick secured a 6-0, 6-0 victory against Anna Clausen and Hannah Lerch 6-0, 6-0 to secure the third team point.

“This championship match was a nail-biter,” Gregory said. “Although we knew it would be a tough match since they had won the state championships for three consecutive years, we believed it would be possible if we executed our game plan and fought for every single point. Our girls were more excited with the opportunity to play them and hopefully win than they were about losing to them for a second consecutive year. We are all very proud of our girls. They worked hard throughout the entire season and extremely well as a team.”

The War Eagles were the top seed from Region 7AAAA and defeated Lafayette, St. Pius X, Woodward Academy and Columbus to reach the title match.

Chamblee also pulled the sweep with its tennis teams with state titles in Class AAAAA. The Bulldogs’ boys team defeated Grady 3-0 May 7 on the road for its second state title and first since 1998. Chamblee was the top seed from Region 5AAAAA and defeated Johnson (Gainesville), North Springs, McIntosh and Buford to reach the title match.

The Bulldogs’ girls’ team won its third consecutive state championship and third overall with a 3-0 victory over Kell May 4. Chamblee was the top seed from its region and defeated Johnson (Gainesville), Decatur, McIntosh and Carrollton to qualify for the championship match.

Woodward’s boys’ team dropped its match to North Oconee 3-0 in the Class AAAA finals May 6.

The company managing the city of Atlanta’s five tennis centers, including the ones at two Buckhead parks, and its supporters fear they will no…

Playoffs progress in lacrosse, soccer and baseball for Northside programs

The early portion of May has brought about the continuation of several state playoffs for local programs in lacrosse, soccer and baseball.

The Georgia High School Association (GHSA) held its state track and field championships at various locations May 9 through 11, with several lo…

The culmination of the prep spring sports season is upon us, and several local programs are still in contention for championships.

The conclusion of the spring sports season brought about championship week for local programs, and they didn’t come out empty handed.