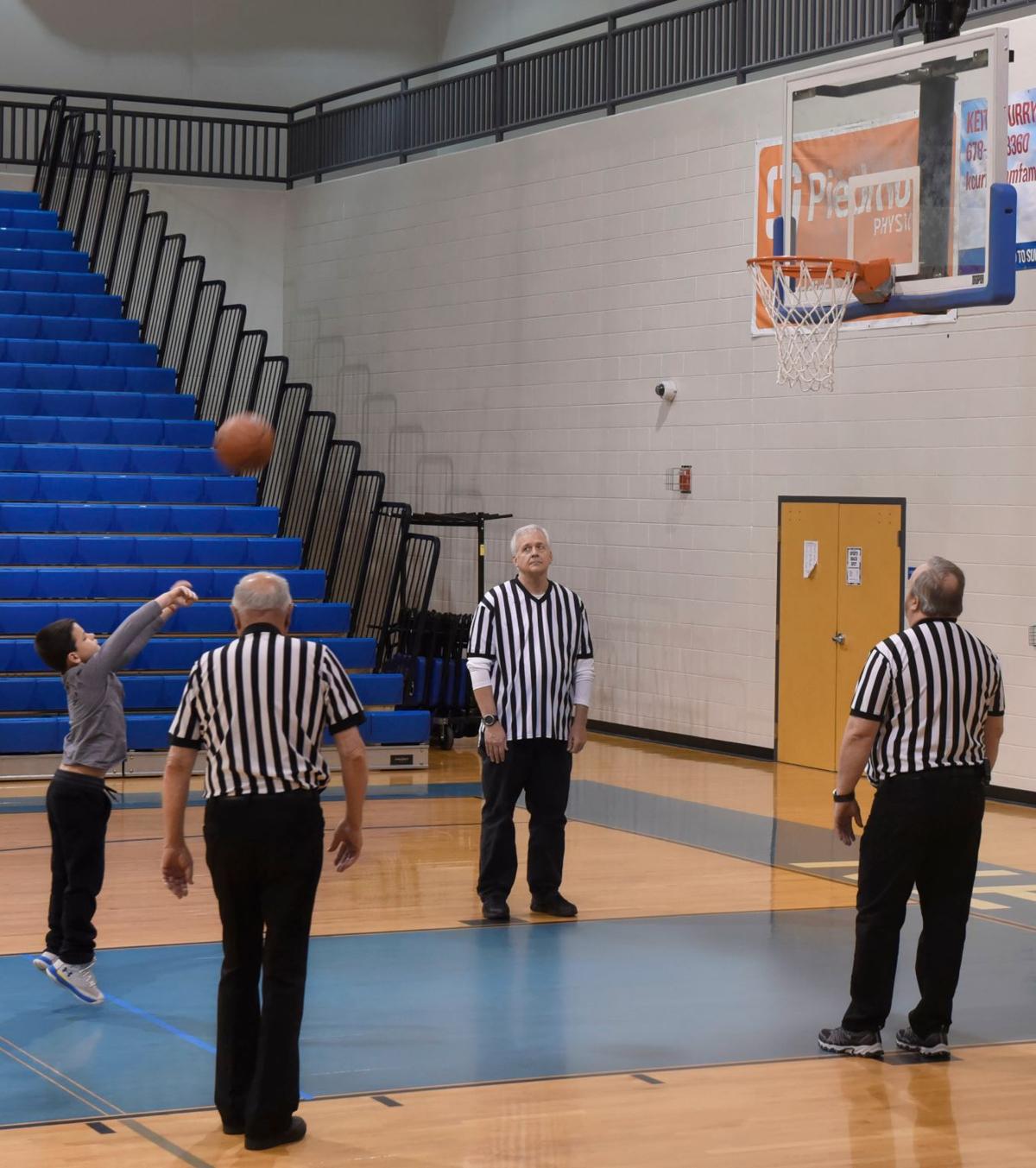 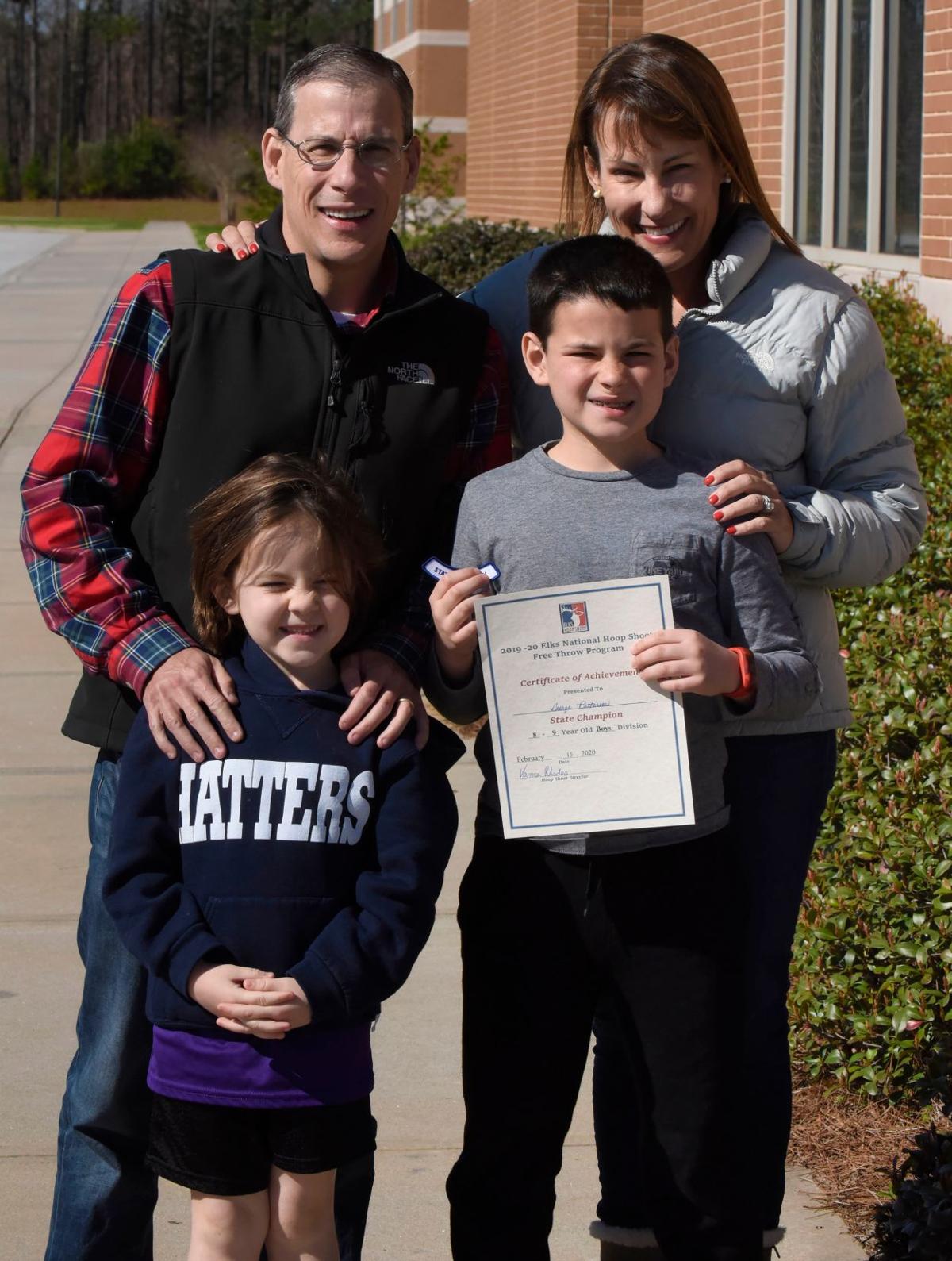 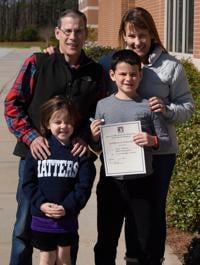 George Patterson, front right, displays the certificate he received after winning the Elks Hoop Shoot’s Georgia-level competition Feb. 15 at Newton High School in Covington. He is joined by his parents, Joe and Carolyn Patterson, and his sister, Mary Claire. Not pictured: sister Belle Patterson.

George Patterson, front right, displays the certificate he received after winning the Elks Hoop Shoot’s Georgia-level competition Feb. 15 at Newton High School in Covington. He is joined by his parents, Joe and Carolyn Patterson, and his sister, Mary Claire. Not pictured: sister Belle Patterson.

This article was updated March 20 at 4:27 p.m. with news that the Elks Lodge Hoop Shoot's regional and national competitions have been cancelled because of health concerns over the coronavirus (COVID-19).

The Buckhead resident and Woodward Academy third-grader will compete in the Southeast regional tournament March 21 in Valdosta.

“It feels awesome” to be in the regionals, he said.

Elks USA, also known as the Benevolent and Protective Order of Elks of the United States of America, is a Chicago-based organization that has lodges in cities across the country and serves the community in a variety of ways, especially with children and veterans.

According to the Elks Hoop Shoot website, it is a free-throw program for kids ages 8 to 13 that has been in existence for nearly 50 years. The 2020 Hoop Shoot national finals will be held April 18 in Chicago. At each Hoop Shoot competition (district, state, regional and national), each player takes 25 untimed shots, and the one who makes the most advances. Over 3 million children participate in the contest annually.

The competition is also aimed at “developing gritty kids” by instilling values such as a strong work ethic and good sportsmanship to encourage children to overcome obstacles. Each year, the names of the six national champions are inscribed in the Naismith Memorial Basketball Hall of Fame.

According to its website, the Hoop Shoot started in Corvallis, Oregon, in 1946, by Frank Hise, who served the Elks’ national president.

“While observing a group of boys playing basketball, (he) noticed that the smaller kids had a hard time keeping up with the others,” the website stated. “To level this imbalance, he organized a free-throw contest where every kid could participate. On that day, the Elks Hoop Shoot was born. But it wasn’t until 1972 that the program held its first national finals in Kansas City, Missouri.”

Vance Rhodes, a Dalton resident and the Georgia Elks Hoop Shoot director, said each Elks lodge can host a Hoop Shoot competition, and the lodges pay for the players’ families’ travel expenses to each contest.

Of the “gritty kids” motto, he said, “It’s basically (teaching children) hard work, competition, camaraderie. A lot of the children that compete on the state and regional level they bond with each other. … In Nebraska, there was a child who had never traveled outside her hometown and whose family had never ventured 50 miles from home.

“They went to regionals and then nationals and it gave her and her family an opportunity to travel. It turned out when she became an adult, she worked for an international company where she traveled full-time. The Elks, we’re all about children and veterans. We work with the local community for the needs we can provide.”

George, who turns 9 March 24, is competing in the 8- to 9-year-old age group. The regional contest will have 30 children total – six from each state (one from each age group) – from Alabama, Florida, Georgia, Mississippi and South Carolina.

He advanced to the regionals by sinking 24 of 25 shots at the state contest Feb. 15 in Covington after making 21 of 25 shots at the district competition Jan. 18 in Cartersville. George found out about the Hoop Shoot after winning a free-throw contest in his Woodward PE class and was encouraged by Woodward varsity boys’ basketball coach Anthony Thomas to enter the Elks tournament.

George also plays forward for a youth team in the Peachtree Road United Methodist Church league in Buckhead. When asked what he likes the most about shooting free throws, George said, “That you don’t have to rush about it, to take your time.”

George’s success is a far cry from his early days in that league two years ago, said his mother, Carolyn.

“When I first signed him up, he begged me to un-sign him,” she said. “Now he loves it. It’s his favorite sport.”

Of the Hoop Shoot, George said, “I think the opportunity has been great for me because I’m getting better at practicing my free-throw shooting in basketball.”

His mother said the Hoop Shoot has benefitted George in multiple ways.

“I am so excited,” she said. ‘It’s so much more than winning. It’s about boosting his confidence. This is the first athletic success he’s had, and it’s been really good for him. He worked so hard for the last year and practiced his free throws. We tell him good things come to those who work hard, and this has really showed him that.”

For Hallie Schiff, what started out as a one-time bat mitzvah project has blossomed into an annual drive to donate 100 pairs of basketball sho…

$705,000 worth of drugs seized in major drug trafficking bust in North Georgia