This ceramic sculpture titled "Lady" is one example of the artwork Sandy Springs resident Judy Robkin will have on display at the American Craft Council's Atlanta show. / Special Photo 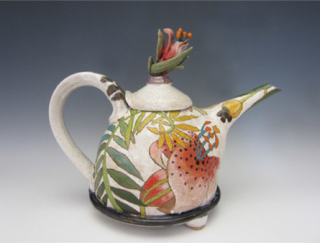 Pottery such as this decorative tea kettle by Dwo Wen Chen of Providence, Rhode Island, will be on display at the American Craft Council's 2017 Atlanta show.

This ceramic sculpture titled "Lady" is one example of the artwork Sandy Springs resident Judy Robkin will have on display at the American Craft Council's Atlanta show. / Special Photo

Pottery such as this decorative tea kettle by Dwo Wen Chen of Providence, Rhode Island, will be on display at the American Craft Council's 2017 Atlanta show.

This article was updated March 13 at 6:07 p.m. with the correct number of artists in the show and clarified information on how old the American Craft Council is.

These are not the type crafts one would find at a flea market or at a retail craft shop.

As Sandy Springs craftswoman Judy Robkin described it, the American Craft Council’s Atlanta show showcases the “crème de la crème” of the country’s top contemporary craftspeople displaying their latest handmade creations in jewelry, clothing, furniture and home décor. She is one of 250 of the country’s most talented artists featured at the event.

The show runs Friday through Sunday at the Cobb Galleria Centre in southeast Cobb County, and has a special ticket price of $5 for tickets sold only at the door for those attending the Friday’s debut after 5 p.m.

The show features numerous crafting programs including the return of “Make Room: Modern Design Meets Crafts,” as well as “Hip Pop” and “Style Slam,” plus many more.

This marks Robkin’s first time being involved in the show. According to Pam Diamond, a spokeswoman for the council, which is celebrating its 75th anniversary and sponsoring the show, her craft pieces are “unique and display the spirit of the ceramic figures she creates.”

“Our jurors have chosen Judy to be part of the Atlanta show this year because her work is very whimsical, and we believe it will resonate with our patrons,” Diamond said.

Robkin’s craft is one-of-a-kind sculptures of females, with each having a different facial expression, different characteristics and selling for $300 to $700.

“The crafts displayed during the show, which patrons can purchase, are known as fine crafts, as opposed to those one would find at local craft shows or homemade crafts, and I feel fortunate to be a part of this show as it is considered one of the best fine craft shows in the country,” she said.

Robkin features her work at other shows throughout the country, but the council’s show is the only one she attends in metro Atlanta.

She said she had always enjoyed coming to the Atlanta show, as it has a good reputation of attracting patrons who are knowledgeable regarding fine crafts, “and those are the type of people we enjoy speaking with as they understand what it means for a fine craft to the handmade.”

“It takes a certain level of appreciation to understand fine craft art, and the time the craftsmen puts into making that piece,” she said.

It takes an average of one month for Robkin to make one of her ceramic pieces, although she works on more than one at time.

Despite having worked mostly with clay early in her crafting career, Robkin changed to ceramics after she and her husband Shai visited Croatia and met an older woman selling vegetables on the street.

“I have always loved the faces of older women, but when my husband walked up to this lady and told her she was beautiful, she made the most incredible face which made me want to sculpt older women’s faces,” she said.

For more information or to purchase tickets, visit http://bit.ly/2njq2yj.

The National Black Arts Festival will host Fine Art + Fashion March 16 from 6 to 9 p.m. at Neiman Marcus at Lenox Square mall in Buckhead.