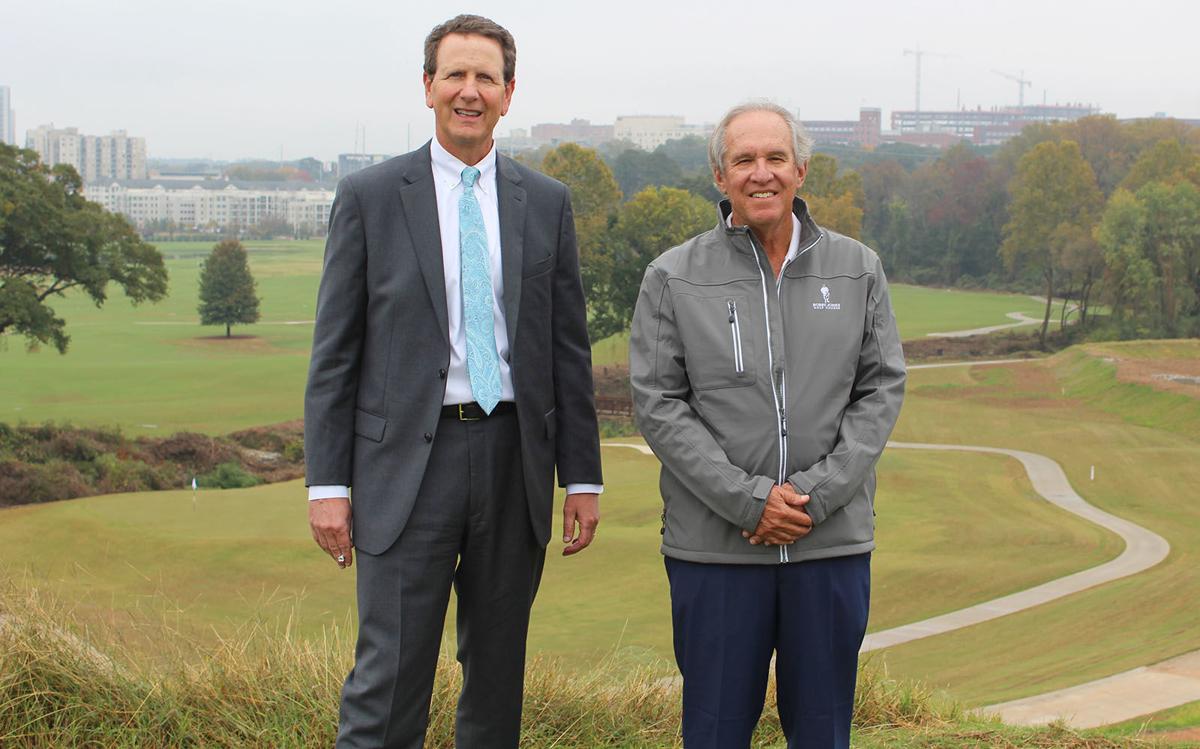 From left, the Bobby Jones Golf Course Foundation’s Chuck Palmer and Marty Elgison stand on the new driving range that overlooks the redesigned course behind them. / Staff – Everett Catts 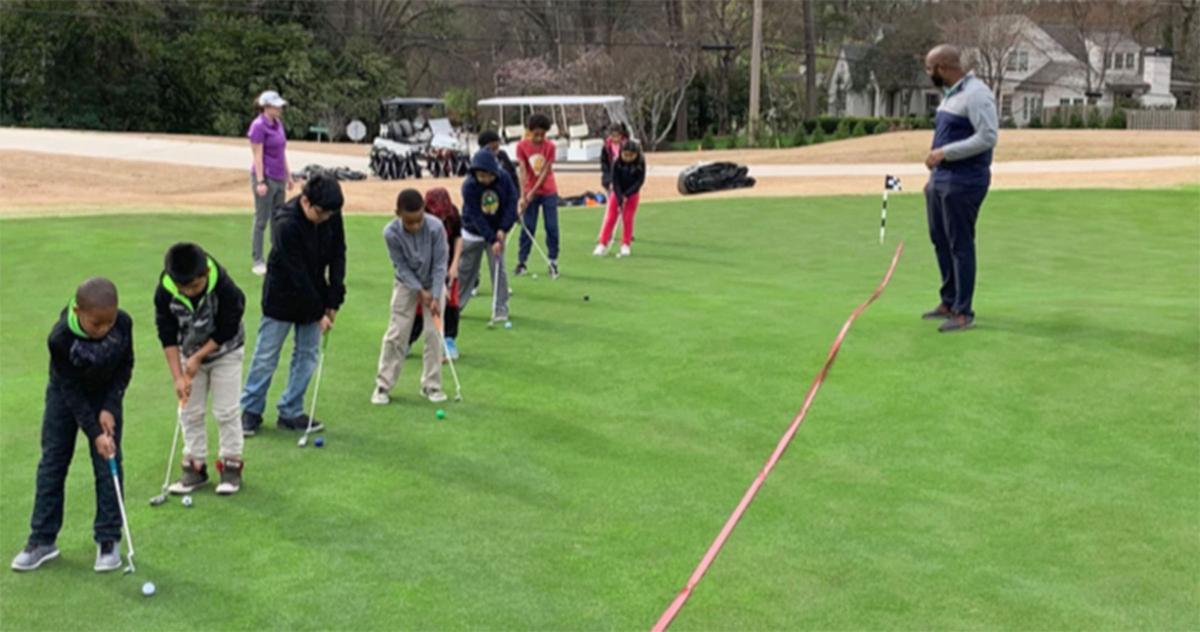 An instructor teaches children from the YMCA how to putt during a lesson at the Bobby Jones Golf Course. / Special Photo

From left, the Bobby Jones Golf Course Foundation’s Chuck Palmer and Marty Elgison stand on the new driving range that overlooks the redesigned course behind them. / Staff – Everett Catts

An instructor teaches children from the YMCA how to putt during a lesson at the Bobby Jones Golf Course. / Special Photo

The story of the new and improved Bobby Jones Golf Course in Buckhead started with a set of clubs back in 1985.

The two men — Buster Bird and Arthur Howell — were two-thirds of the law firm Jones, Bird and Howell. Buster Bird was my grandfather. The Jones in that equation was Bobby Jones’ father, Robert P. Jones. The younger Jones joined the firm as well, but the “Jones” on the letterhead belonged to his father. After merging with Alston, Miller and Gaines, the firm became Alston & Bird.

That’s why the call came in to the partners. Well, that and the fact Jones died in 1971. Elgison found a deal with Spalding from 1940, but Georgia law favored the Jones estate. They reached an agreement to create Bobby Jones-branded golf clubs with Callaway, with the royalties going to Jones’ heirs.

Ever since that fateful day, Elgison has served as the legal steward of the trademarked name of Georgia’s greatest sportsman.

Next week, Augusta National Golf Club will host the Masters, the major tournament Jones created at his beloved course. Closer to home in Buckhead, where Jones lived most of his life, Elgison has led the transformation of the only golf course bearing his name.

A native Atlantan, Robert Tyre “Bobby” Jones won his first golf tournament when he was just 13. In 1930, he won the Grand Slam, holding the British Amateur, the U.S. Open, the British Open and the U.S. Amateur titles in the same calendar year. While the names of the majors have changed, he is the only person to this day to accomplish that feat. He retired from competitive golf when was 28.

At the direction of Howell, Elgison helped create a corporation to manage the Jones name on behalf of the family. It lent the name to distinguished gentleman’s clothier The Hickey-Freeman Co. among other things.

One thing that always stuck in Elgison’s craw was the condition of Bobby Jones Golf Course. Since moving to Atlanta from Florida after college, he has lived close to Atlanta’s first municipal golf course. He felt its condition was a disservice to the man for which it was named.

When he retired in 2011, Elgison decided to take it on. He started with the city of Atlanta and got nowhere fast. He made some headway with the local city council member. He joined with some other stakeholders, which led to the creation of a master plan for Atlanta Memorial Park, where the course is located, and the founding of the Memorial Park Conservancy.

But once he got to the mayor’s office, it stalled. Legendary golf course designer Bob Cupp was already working pro bono on a plan for the course.

Then he met Chuck Palmer, an attorney with Troutman Saunders with a passion for golf. Palmer got the attention of the state of Georgia, and the state was actually interested in fixing up Bobby Jones. There were a lot of moving parts. Long story short, the state now owns the golf course.

In November, the Cupp-designed course opened to great fanfare following a one-year renovation project. The nine-hole reversible layout has been a hit, and the driving range is always in use. Once the clubhouse, called the Murray Golf House, is complete, it will become a destination for golfers and non-golfers alike.

It will serve as the Georgia Golf Hall of Fame and the headquarters of the Georgia State Golf Association, The Georgia PGA and Kids Golf USA. The 10th Hole Bar and Grille will look out over the links.

The course, meanwhile, is adaptive, meaning it is made to be played by people with mobility and cognitive challenges. Several times a week, children from local YMCAs come to the course to learn the game. There is even a small course specifically designed for youngsters, called Cupp Links in honor of Cupp, who died before Bobby Jones reopened.

We have no way of knowing what Bobby Jones would think about the changes. Anecdotally, he played his namesake course only twice that I know of, and he didn’t support it by donating memorabilia or through patronage.

I imagine he would take some satisfaction in the children playing the sport he loved, and in Buckhead becoming the center of the golf universe for the state once the Murray Golf House is complete.

There were a lot of people pulling in the same direction to make it all happen, but Marty Elgison is the primary mover.

It was all set in motion when he first went looking for that trademark back in 1985.

Buckhead resident Thornton Kennedy is the president of PR South, a public relations firm, and a former news editor of this paper. He can be reached at tkennedy@prsouth.net.

Obsession with college admissions is unhealthy and unnecessary

“I couldn’t get into the University of Georgia today.”

Atlanta is a real estate town.

With a heavy heart, Roger Smith will move into the Randolph-Lucas House in a few weeks.

The Texas locomotive carries history of Atlanta into present day

The Texas may be the second piece in the Cyclorama’s move from Grant Park to the Atlanta History Center, but its significance cannot be overstated.

The Dining Room at the Ritz-Carlton may have been the best restaurant in Buckhead, but it didn’t have a shrimp cocktail. That knocked it down …

Crime is a problem, but we can make a difference

The last thing we expected when we got to our car following an Atlanta Hawks basketball game was a broken window.