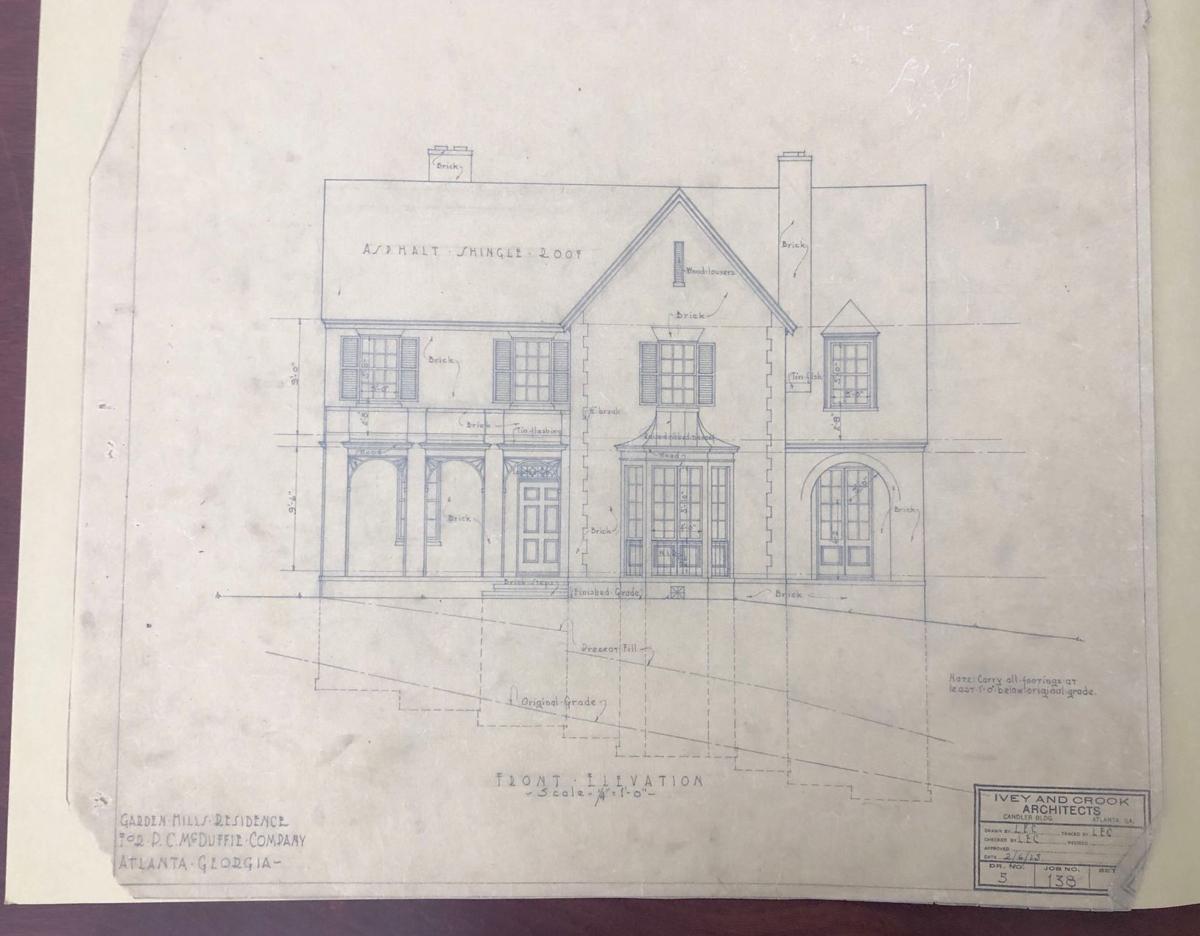 These blueprints show the plans for the house at 125 Rumson Road in Buckhead's Garden Hills neighborhood. It was built in 1925 and designed by Ivey and Crook Architects.

She lives in Peachtree Hills and owns a few rental houses. Over the summer, a home in Garden Hills caught her eye. It was rundown and in need of major repair, and there were no photos of the inside. The few photos showed a front porch strewn with stuff and plywood covering the garage bay doors in the back.

There was something about the house, though. Steele suspected much of it was in its original condition. A little research led her to the National Register of Historic Places, which includes Garden Hills. There was a mention of an Ivey and Crook-designed house on Rumson Road.

It was thought to be the model house for the neighborhood.

Through a mutual friend, she contacted Lewis “Buck” Crook’s granddaughter, Laura Howard, who also happened to be an architect in Atlanta. Howard found the job number and told Steele most of her grandfather’s papers were at the Atlanta History Center in Buckhead.

Shortly after, Steele sent images back to Howard of the original sketches for 125 Rumson Road. The client was P.C. McDuffie Co., and the sketches bore the date Feb. 6, 1925. They were by Ivey and Crook Architects.

The first house on the right facing the triangle at the intersection of Rumson Road and Rumson Way off Peachtree Road has a blocky brick porch on the front with three brick columns. To the left is a bay window looking out to the front yard, which is consumed by a magnolia tree.

Attorney Phillips Campbell McDuffie developed Garden Hills beginning in 1925. He envisioned a country club community with a swimming pool, community center and greenspace at its heart.

Ernest Ivey and Lewis Crook both graduated from Georgia Tech and both worked for Hentz, Reid & Adler. Crook was the chief draftsman for Neel Reid. He even toured Europe with his mentor Reid. Ivey co-founded the Georgia Tech College of Architecture. He and Crook launched the firm bearing their names in 1923. The model home for McDuffie’s Garden Hills would have been an early commission.

Steele has hired the best possible person to handle the restoration, the aforementioned Howard. A graduate of Georgia Tech, she followed in her grandfather’s footsteps and thus inherited his library.

Howard taught herself her grandfather’s unique style of classicism through his books. She has been researching how to solve a design challenge and found pages marked showing the solution. Crook found the same answer two generations before by studying the same exact pages.

Howard designed renovations for her grandfather’s house on Peachtree Battle Avenue at Nacoochee Drive in Buckhead, a home Crook designed for himself. She said what struck her about the Rumson Road house were the elements that seemed uncharacteristic of Ivey and Crook, like that porch.

The firm is known for the four-columned wooden porches on the fronts of many of their houses. A brick porch is rare. There was a clue in those plans Steele found at the history center. The brick was supposed to have wood accents and arches, which would have been more in keeping with their style.

The staircase in the house, though, strongly reflects Crook’s aesthetic, with a long, arched window and an elegant, elliptical landing. That window also happens to be Steele’s favorite element of the house, for now.

Over the coming year, the artist and the architect will create something both new and old, a complete restoration of the original house, repurposed to showcase modern art, as Steele’s home will double as an art gallery.

Alston Glenn was a man on a mission in 1969 when he went into Henri’s Bakery & Deli.

A walk through the woods reveals history and surprises

The most peaceful spot in Buckhead is about to be disrupted for a great purpose.

A poem lamenting the passage of time, the loss of friends and changes to a community has become a clarion call, a horn sounded from on high, i…

I am most thankful for the civically engaged

This is the week of Thanksgiving, and, as such, I’d like to reflect on that for which I am thankful.

Time to put the KKK tunnel rumors to rest

Everyone has a story about the tunnels.