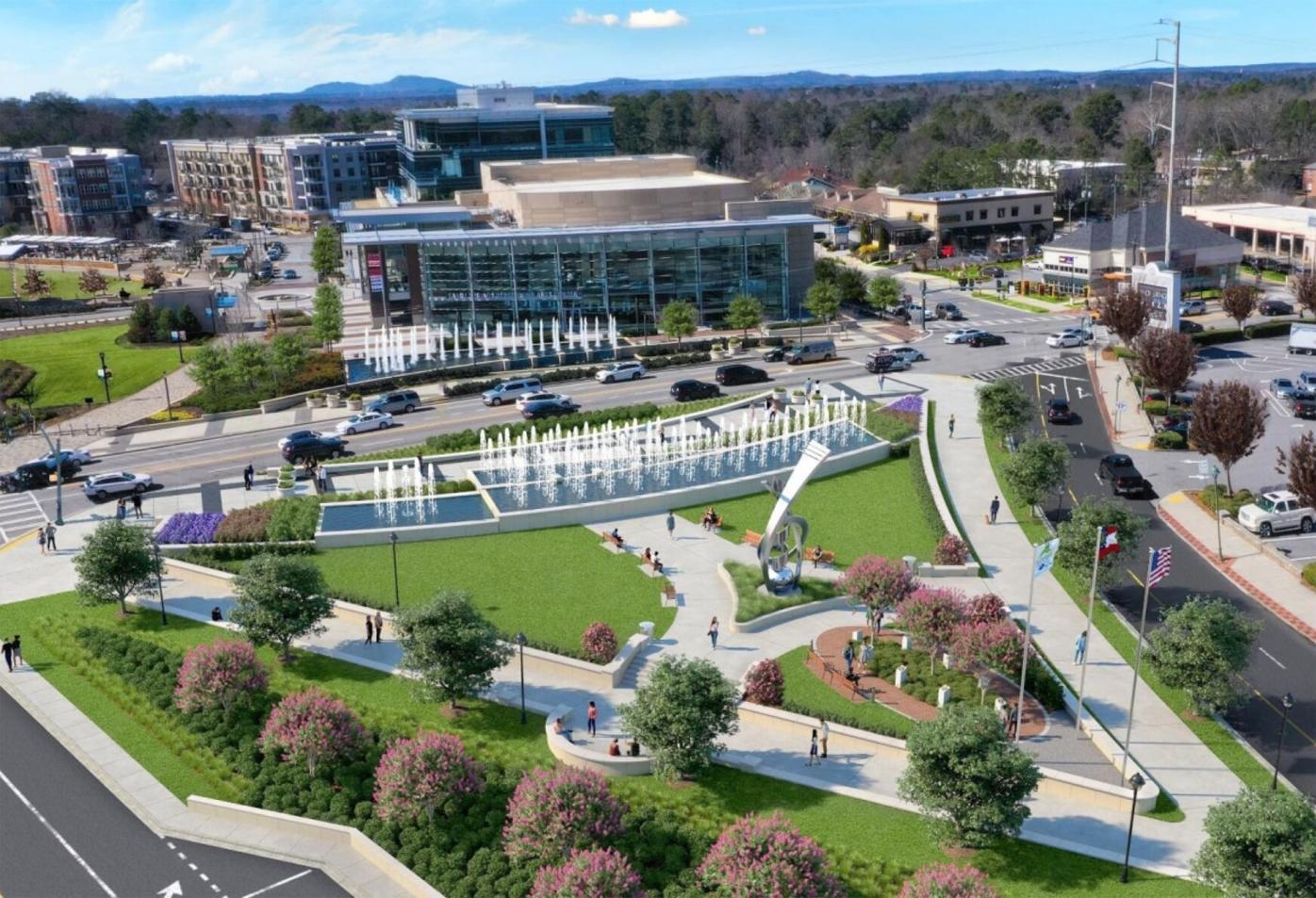 This rendering shows what the proposed Veterans Park in Sandy Springs will look like from the east side facing the west, including Roswell Road and the City Springs complex across it.

This rendering gives a closeup view of what the heart of Veterans Park in Sandy Springs would look like once completed.

This rendering shows what the proposed Veterans Park in Sandy Springs will look like from the east side facing the west, including Roswell Road and the City Springs complex across it.

This rendering gives a closeup view of what the heart of Veterans Park in Sandy Springs would look like once completed.

Details of the park’s design were released at the council’s March 15 work session, which was held virtually due to the COVID-19 pandemic. The planned park is located along Johnson Ferry Road and Mount Vernon Highway, from Roswell Road to Glenridge Drive, and is part of a road improvement plan dating back to 2007.

In 2018 the council voted to approve the project’s compressed-grid option, one of two proposals for the road’s upgrades. It is expected to cost between $26.6 million and $31.6 million. The Veterans Park portion of the development abuts Roswell Road and faces the City Springs complex.

The plan will require a design phase of 12 to 18 months, then of right-of-way acquisition for 18 to 24 months, followed by utility relocation for a period to be determined, construction Phase 1 of 24 months followed by six months of Phase 2 to build the connector road.

Steve Provost, executive vice president and chief strategies officer with Barge Design Solutions, which was hired to handle the park’s design, said the oval-shaped, brick-and-concrete area at the park could have an inscription on the pavers around it to honor veterans. Another option would be to have a computerized display honoring them.

“I would like to have some pavers representing my former unit in Vietnam. This is an excellent thing to follow through on,” DeJulio said.

District 1 Councilman John Paulson, the council’s other Vietnam vet, added, “I think it’s a great idea. … About a year ago, I saw a Medal of Honor recipient, David Bellavia, speak. He talked about how when people say, ‘Thank you for service,’ he didn’t always know what to say in response. He decided to say, ‘Because you’re worth it.’ Let’s turn that around. … This park makes a statement to our veterans that tells them they are worth it.”

Under its current design, the park will be about two acres and is more than 1,000 feet long. It also will include a fountain along Roswell Road to match the one across the street at City Springs in front of the Sandy Springs Performing Arts Center.

Barge Vice President John Fish added the park will have nine parallel parking spaces for residents and visitors wanting to drive there. District 6 Councilman Andy Bauman said the Sandy Springs Library, located just east of the park, could also be used for parking.

“There’s a long, wide 12-foot-wide multiuse trail that will ultimately connect to the Sandy Springs MARTA station,” Fish said of the path incorporated into the park's design.

CUMBERLAND — Cobb County’s tallest building should be completed by mid-October, a representative of the construction company told the Cobb Cha…

Some in Vinings eye cityhood, too

The Midtown Connector Project (MCP) Foundation, the nonprofit behind an ambitious plan to build a 25-acre park over Interstate 75/85 in Atlant…

Hub404, formerly known as the Park Over Georgia 400 project, remains on hold due to the COVID-19 pandemic, and its completion has been pushed …

The Mill on Etowah hosting first market of the year Tuesday

Report: Inmate conspired to get marijuana, tobacco to prison