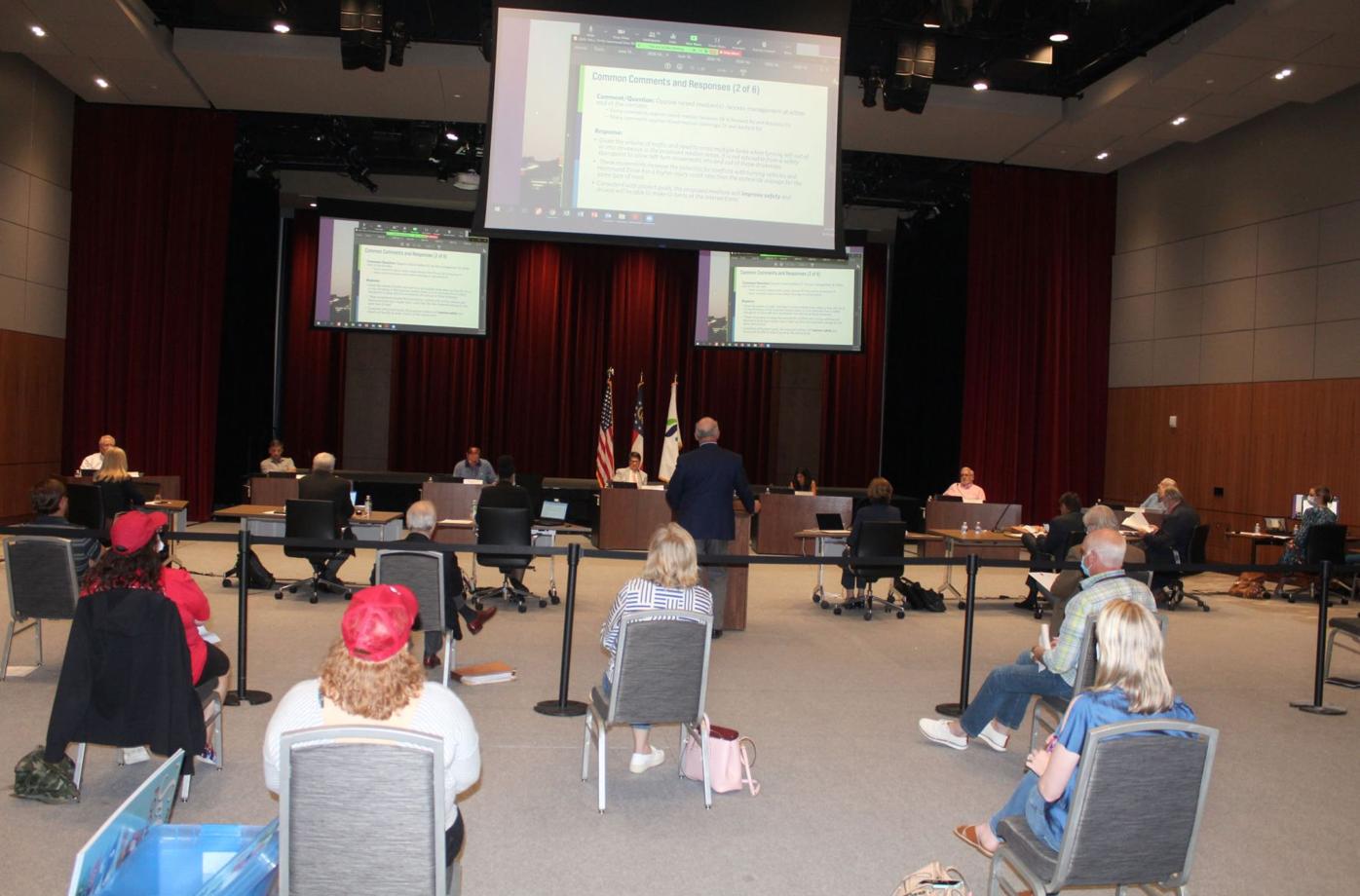 With social distancing in effect, residents, right, and city staff members, left, talk as they wait for the Sandy Springs City Council’s June 16 work session and meeting to start.

With social distancing in effect, residents listen to a presentation during the Sandy Springs City Council’s June 16 work session.

With social distancing in effect, residents, right, and city staff members, left, talk as they wait for the Sandy Springs City Council’s June 16 work session and meeting to start.

With social distancing in effect, residents listen to a presentation during the Sandy Springs City Council’s June 16 work session.

Sandy Springs’ fiscal 2020 budget was $116.2 million, $6 million more than the previous fiscal year and breaking a record as the largest in city history. But as expected, due to a large tax revenue hole caused by the COVID-19 pandemic, the city’s fiscal 2021 budget is taking a big hit. At $91.5 million, it’s 21.23% less than the previous fiscal year.

“We are already seeing the effects of the slowdown in the economy,” City Manager Andrea Surratt said. “Specifically, in anticipation of lower revenues, the general fund has been reduced by 21%, hotel/motel tax by 51% and TSPLOST funding by 47%.”

At its meeting June 16 at City Springs, the Sandy Springs City Council voted 6-0 to approve the fiscal 2021 budget. It was the second of two state-mandated public hearings on the budget, with the first one at the council’s June 2 meeting following a series of budget workshops in May. The budget had to be approved by June 30, when the current fiscal year ends.

The meeting, which followed a work session, was the council’s first in-person one since March 3 due to the pandemic. In between, all meetings and work sessions were held virtually.

Only 50 individuals, including city staff members and elected officials and the media, were allowed to attend the meeting due to health and safety restrictions put in place because of the outbreak, but others could watch from the lobby, where it was live-streamed. Each attendee had his or her temperature checked, was asked if he or she displayed any symptoms of the coronavirus and was asked to wear a mask. City staff members also wore them, but the mayor and council members did not.

Of the budget, District 5 Councilman Tibby DeJulio said the city got some good news June 6 with the federal jobs report stating 2.5 million positions were added in May, when unemployment decreased for the first time since February.

He said another sign that the economy is not as bad as one might think is a National Retail Federation report released earlier in the day. The report, which cited statistics from the U.S. Census Bureau, stated overall retail sales were up 17.7% for May, an increase of 11% seasonally adjusted from April.

The city’s budget cuts won’t include any layoffs or furloughs, but most new hires have been frozen, and any employees who retire won’t be replaced. Public safety is the only area not impacted by the hiring freeze. Other cuts include large transportation and/or streetscape projects.

During the budget hearing’s public comment portion, prior to the council’s vote, Caitlin Brinkley said she would like to see the city spend less money on COVID-19 emergency funds and more on “parks, streetscapes and other quality-of-life enhancements.”

DeJulio and District 6 Councilman Andy Bauman said the city, as it has in the past, needed to take an especially conservative approach to the budget given the loss in tax revenue due to the pandemic.

“We have some funds to cushion us,” DeJulio said. “… This is not something passed haphazardly. There’s a lot of thought that goes into it.”

Surratt said the city would update the mayor and council on the budget monthly and could adjust it accordingly, and District 1 Councilman John Paulson said an even more in-depth mid-year review is another opportunity for changes, if needed.

“This is my 10th or 11th one of these, and this the first time the level of uncertainty we’ve had ever was this high, including 2010 or 2011 with the Great Recession,” he said of the budget. “… We’ll see how this goes. … It will be interesting to see if (by January) the forecasts of doom are over.”

Following an in-person public meeting March 5, the city of Sandy Springs will host some online design activities this month as part of the pro…

The city of Sandy Springs was mostly spared from the crime that was a byproduct of peaceful protests that erupted into violence, looting, vand…

The city of Sandy Springs has started its three-phased plan to reopen services and host events again in response to the COVID-19 pandemic, but…

Confusion over how individuals could submit public comments led the city of Sandy Springs to cancel its June 17 planning commission meeting.

One major American business could be bringing a new location to Sandy Springs.

New study shows benefits of regional airports; Floyd County a top draw in the area but Bartow's is moneymaker