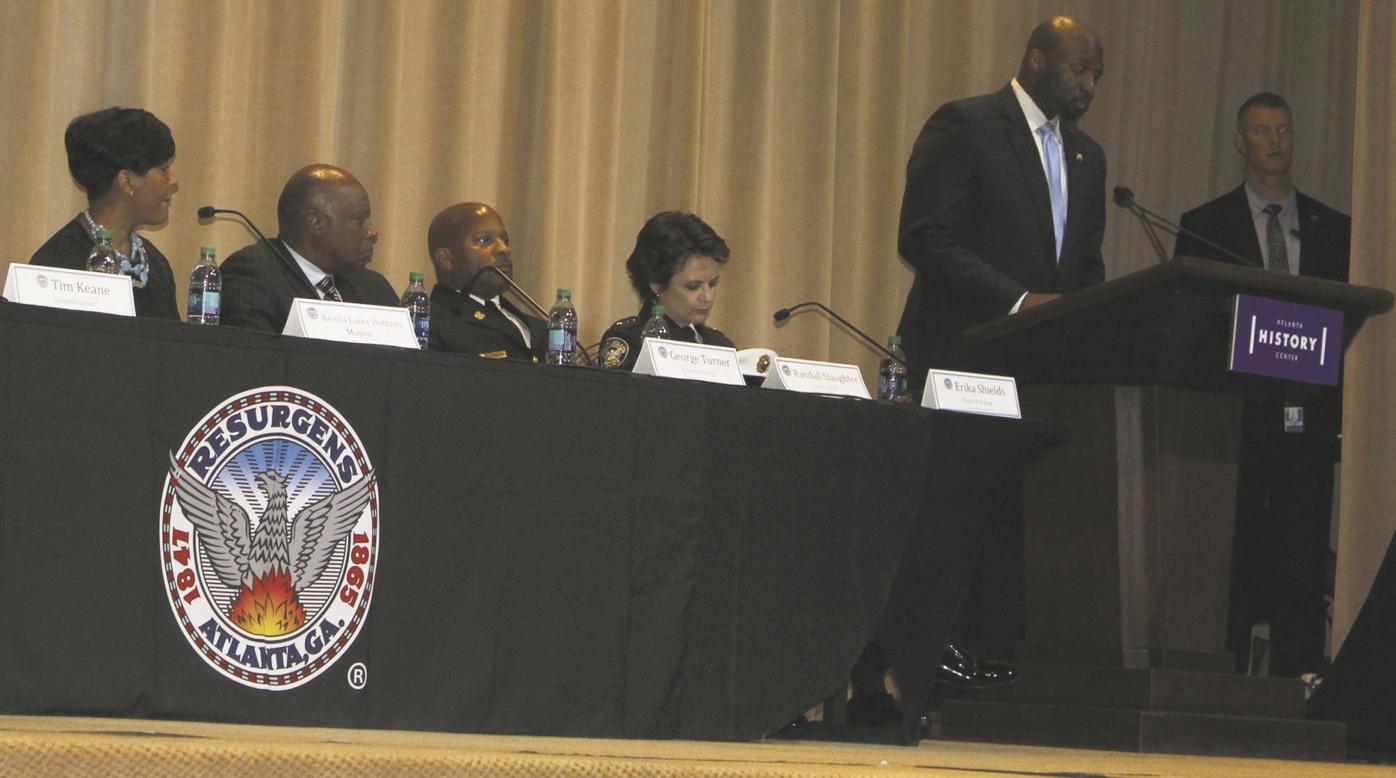 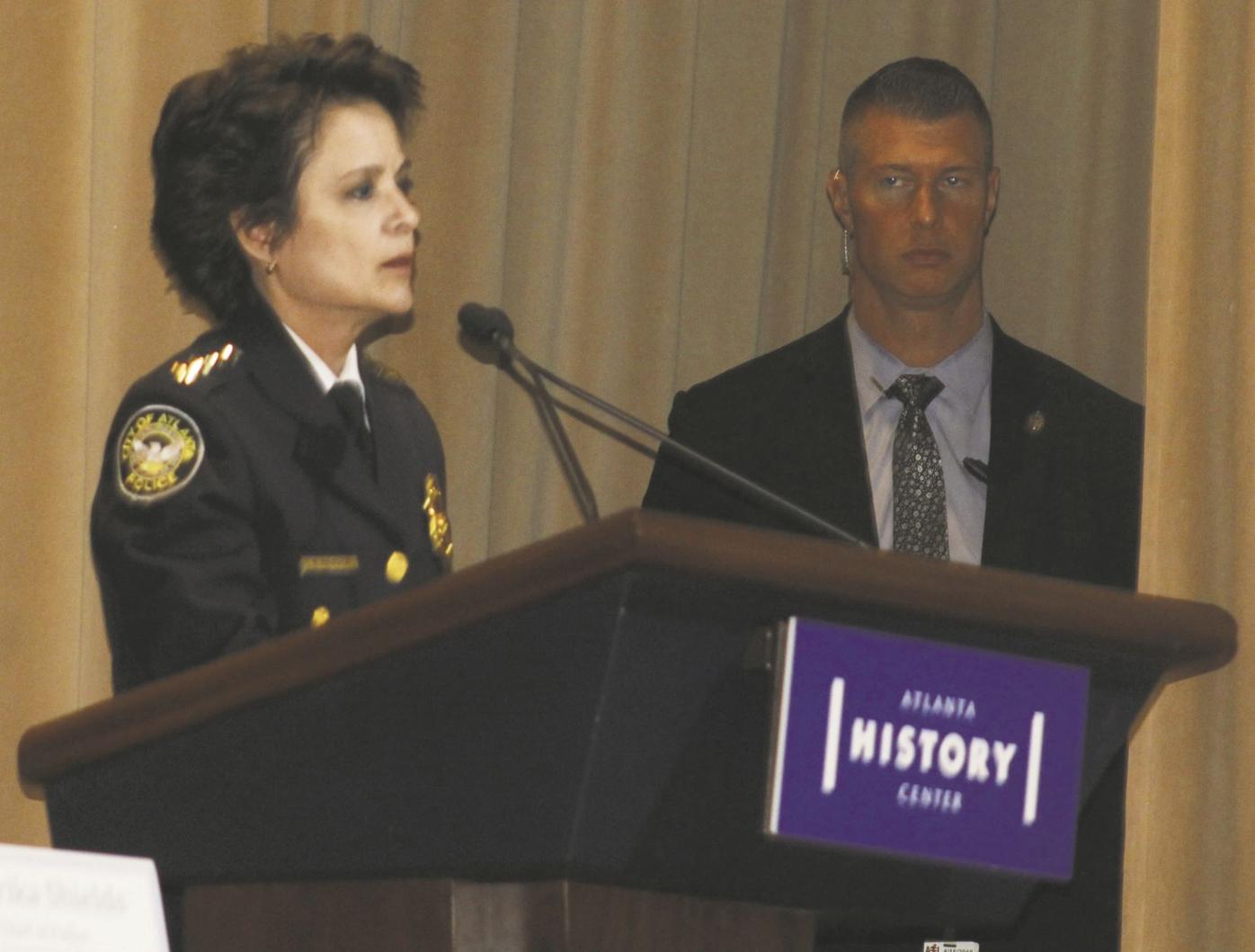 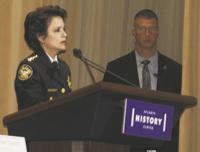 Atlanta Police Chief Erika Shields speaks during the town hall meeting the mayor hosted at the Atlanta History Center in Buckhead on Feb. 28. Shields said the Atlanta Police Department had struggled with crime in Zone 2, which includes all of Buckhead, in the previous 18 months.

Atlanta Police Chief Erika Shields speaks during the town hall meeting the mayor hosted at the Atlanta History Center in Buckhead on Feb. 28. Shields said the Atlanta Police Department had struggled with crime in Zone 2, which includes all of Buckhead, in the previous 18 months.

Atlanta Mayor Keisha Lance Bottoms can relate to the pain and fear residents of Buckhead and other parts of the city feel regarding crime.

"I am a victim of a slider crime and my nephew (Darius Bottoms) was murdered (in 2014)," she said. "... He was a victim of mistaken identity by three gang members who thought he was someone else."

Bottoms and her department heads spoke about crime and other topics at a town hall meeting Feb. 28 at the Atlanta History Center in Buckhead. It was the first town hall meeting she has hosted since being inaugurated in January 2018 and the first of three in a month's time. The second one is set for March 19 at the Adamsville Recreation Center, 3201 Martin Luther King Jr. Drive in west Atlanta, and the last one will be held March 28 at the FanPlex, 768 Hank Aaron Drive in southeast Atlanta.

At the Buckhead meeting, Bottoms and her senior staff each spoke before taking questions from the audience at the center's McElreath Hall, which was filled to capacity. Fifty more residents had to stand in the lobby and watch the meeting via a live streaming video on a local TV station's website. Residents asked questions by filling out notecards beforehand or speaking directly during the meeting. Topics ranged from traffic to development to potholes to government corruption. But crime, repeat offenders and the city/Fulton County justice system dominated the evening, which ended with attendees having the option to meet with city department representatives in breakout sessions.

"It's no secret. The Atlanta Police Department, we have struggled with crime in Zone 2 (which includes all of Buckhead), probably in the last 18 months," Police Chief Erika Shields said. "It's gnawed away on us. We take an enormous amount of pride in what we do. What we started confronting about 18 months ago was everything seemed to revolve around cars, whether it was a stolen car or a car being broken into, a slider crime, we just found ourselves in this uphill battle.

"Part of the difficulty is there are so many cars in Buckhead. There's so many parking garages, and they're mobile. Not just are the cars mobile but we're finding the offenders and the arrestees don't live here. They're transient, which makes it very difficult to get a bead on who's committing the crime. Adding to the complexity is the fact that these type of cases are not prosecuted."

Shields also said the police take the car-related crimes seriously even though they're not major ones, and admitted to failing Buckhead in terms of keeping it safe.

Because of the city's stolen car/slider crimes/car break-in issue, Shields said the police had some of their officers learn the pit maneuver from the Georgia State Patrol, so they could execute that move in chases involving suspects to stop them. In some cases officers won't chase suspects if there's a potential for those cops to cause a car accident that could kill an innocent bystander driving another car.

Regarding Zone 2 being reduced in size as part of a beat redesign strategy, news that was announced earlier in the week, Shields said the zone was too large, and that affects officers because of Buckhead's traffic. By mid-March, two Zone 2 beats will be shifted to other zones, she said, and that will free up Zone 2 officers to protect the Buckhead area more easily.

Shields then talked about the repeat offender issue in a speech that elicited a standing ovation.

"I need your help," she said. "There is a very real issue of repeat offenders who are out on the streets despite (previously) being arrested 12, 42, 60 times. This is a very real problem there. You represent power, you represent influence and you represent the ability to help us change the trajectory of the criminal justice system of Atlanta. We have to close the existing gaps."

Shields said she also needs the judges' and prosecutors' help to fix what she and her deputy chief, Jeff Glazier, call a broken system.

"I need the (Fulton County) district attorney to show us who is getting prosecuted and who is getting let out," she said, drawing applause and cheers from the audience. "When cases are adjudicated, that adjudication should be transparent to all of us, particularly law enforcement. What's happening to our cases? We don't know. The Magistrate Court (judges), they set the bond. ... All we're asking of them is before you make a decision whether a person should walk out the door (with a low or signature bond), you have the person's criminal history in front of you and the initial (arrest) report. That's it. The Magistrate Court sets the trials. Give our officers a chance to testify in court."

Shields also said department morale has increased since Bottoms got the city council to approve $10 million in police raises in October.

On one notecard, a resident asked, "Are we a sanctuary city?" The term "sanctuary city" refers to cities whose laws tend to protect undocumented immigrants from deportation or prosecution, despite federal immigration laws.

In June Bottoms signed an executive order to end the city's agreement with U.S. Immigration and Customs Enforcement (ICE) in which suspects arrested by ICE agents could be housed in Atlanta's jail. As she talked about the order, lots of boos and some claps rained down from the audience, which asked why she did it.

Bottoms said she did so because she didn't want Atlanta to be tied to the federal government's immigration laws that separate families when an illegal immigrant is arrested. She said as a result, the city's jail has dropped from about 400 inmates to about 70 per night.

"We are working with several of our partners to help us (figure out) what our jail will become," the mayor said, earlier saying Atlanta is a "welcoming city" but not a sanctuary city.

In answering several residents' questions and complaints about the city's pothole problem, interim Public Works Commissioner James Jackson said 16,870 had been filled in 2018, way up from the 2,470 filled the previous year. The city's 311 app shows where the potholes have been filled and gives residents a chance to report their own. It also gives residents a way to report graffiti in their neighborhood.

In answering questions about local roads and traffic or street conditions, Jackson said his department is about to start a traffic signalization project on Moores Mill Road, where it plans to add a turn lane near the Marietta Boulevard intersection. He also said the city plans to repave Wieuca and West Paces Ferry roads soon.

Amber Connor, one of the leaders of the Concerned Citizens United Facebook group, which has about 5,000 members and has pushed for reforms in the city and in the justice system to reduce crime, asked if the city was willing to increase police officers' pension from 30 percent of annual pay to 60 percent once they've reached 20 years in the department, " so they could stay for 30 years (total)."

She also asked if the city could pay its police officers when they testify in court or compensate them for it some other way.

Bottoms replied by saying, "We will continue to look at ways to be creative to make sure we take care of the officers we have. ... There are still a lot of resources to be spread around."

A woman who only identified herself as being a member of Concerned Citizens United said she has made repeated requests to schedule a meeting with Bottoms through the city's website, since shortly after Bottoms was inaugurated, but has received no response. "Can you commit to meeting with (the group at a future date) tonight?" she said.

Matthew Charles Cardinale is back on the ballot.

Nine candidates are running in the Atlanta City Council’s District 3 special election March 19. The election is needed to fill the seat after …

Lori Smith, who who lives on Howell Mill Road in Buckhead, likes decisions the city of Atlanta has made in prioritizing the street projects to…

Leaders with the city of Atlanta are mourning the loss of Lonnie King Jr., who helped spearhead the Atlanta Student Movement during the Civil …

Atlanta suspect accused of stealing car has 34 prior arrests

The Atlanta Police Department is investigating the theft of six sets of keys and two vehicles from the valet at a Buckhead hotel over the weekend.

At its meeting March 18 at City Hall downtown, the Atlanta City Council approved a resolution requesting an independent review of how personne…

Two suspects have been arrested and charged in the case of a man who was shot to death in February outside a Buckhead bar.

In accordance with the city of Atlanta Charter Code Section 2-303(a), the Atlanta City Council will recess April 1 through 12.

April 13 at 5 p.m., more than 800 individuals, including exonerated men and women, their families, Innocence Network organizations and advocat…