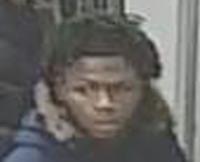 This man is one of two suspects wanted in a Feb. 10 triple shooting in northwest Atlanta.

This man is one of two suspects wanted in a Feb. 10 triple shooting in northwest Atlanta.

The Atlanta Police Department announced it is seeking the public’s help in identifying two suspects wanted in a triple shooting.

According to a news release, Feb. 10 at about 11 p.m., officers responded to a 911 call about at least one individual being shot outside the Daron Village Apartments located at 62 Harwell Road in northwest Atlanta. When they arrived, they found three victims with gunshot wounds. An adult female, a 6-year-old male and a 15-year-old male each were taken to a local hospital in stable condition.

“Witnesses in the area were uncooperative, but investigators did learn that suspects in two other vehicles were shooting at each other when the victims, in a third vehicle, were struck by gunfire,” the release stated. “Gun assault team detectives are working to determine the circumstances that led to this incident.”

Anyone with information about the case is asked to contact Crime Stoppers Atlanta. Tips can be submitted anonymously at 404-577-8477 or online at http://bit.ly/3i0F6OY. Witnesses do not have to give their name or any identifying information to be eligible for the reward of up to $2,000 for the arrest and indictment of the suspects.

Atlanta Police: Missing elderly man has been found and is safe

The Atlanta Police Department announced a missing elderly man has been found and is safe.

MARIETTA — When Cobb’s governing board approved a new pay scale for public safety employees in January 2020, it came with an understanding: ra…

The Atlanta Police Department is seeking the public’s help in finding a missing woman.

The Atlanta Police Department is seeking the public’s help finding a suspect involved in two Feb. 11 robberies in which he held up women at gunpoint.

What a surprise who did the crime! Go to Lenox mall the all hang out there.