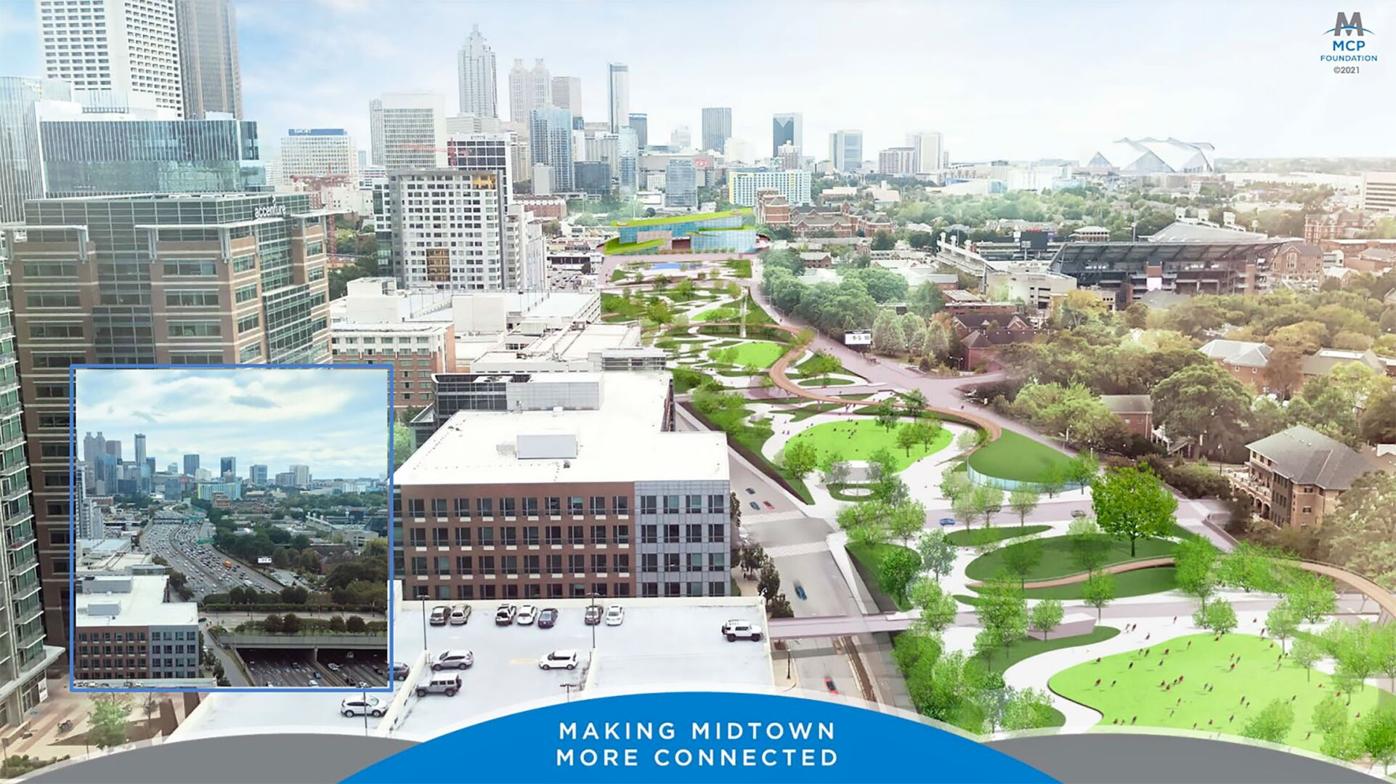 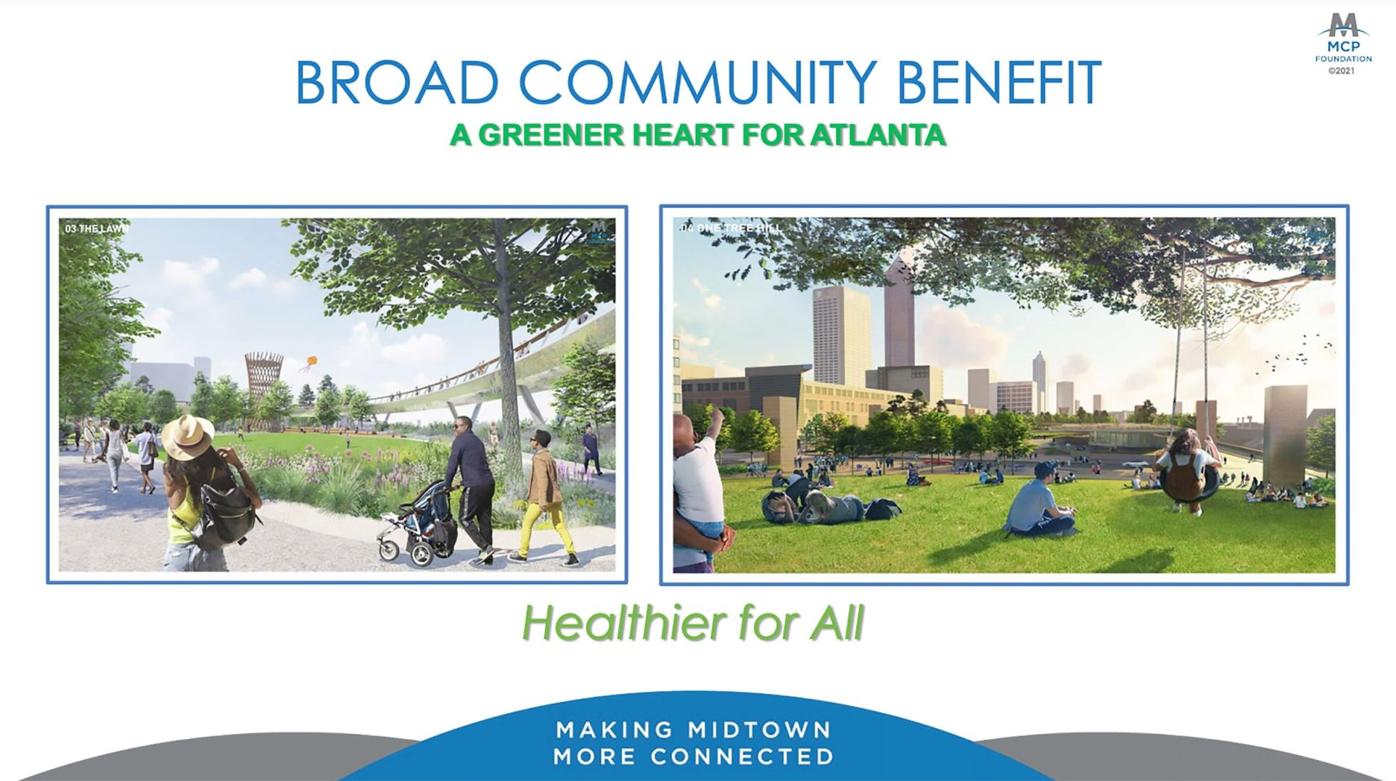 The Midtown Connector Project (MCP) Foundation, the nonprofit behind an ambitious plan to build a 25-acre park over Interstate 75/85 in Atlanta, has released a video on the proposal.

The 15-minute video (shown above left), which was released March 16, includes a form at the bottom of the webpage with opportunities for individuals to comment on the project, which is expected to cost between $800 million and $1.2 billion. It’s the first of seven informational videos to be released on the project, said Paul Morris, the MCP Foundation’s CEO.

The park is expected to be built above the highway from 10th Street south to North Avenue and is part of the larger Midtown Connector Transportation Improvement Project to also upgrade the highway. It will get technical support and guidance from the Georgia Department of Transportation (GDOT), the Georgia Institute of Technology, the Midtown Alliance and other organizations.

Morris said the project, which was announced in 2018, will unclog 75/85 while bringing a needed park to the area.

“Suffice it to say, the Connector freeway is experiencing severe chronic congestion and traffic safety problems,” he said. “This project would repair what is needed and replace what was lost, restoring the transportation network and natural environment to a state that secures a better future for Atlanta and the region.”

Morris previously worked as the president and CEO of Atlanta BeltLine Inc., the organization that manages the BeltLine project, a 22-mile ring of abandoned railroad tracks transformed into multiuse trails with development springing up around it.

According to the Midtown project video, its plans call for reconfiguring key interchanges in that area, including replacing the ramps at Exits 249D (to North Avenue) and 250 (to 10th and 14th Streets), with a one-way couplet near the Connector. The couplet would connect I-75/85’s southbound Exit 250 and northbound Exit 251A to I-85 southbound’s Exit 84. Plans also call for reconnecting three cross streets that were torn down when the highway was built.

According to the video, funding will be comprised of public (48% from federal and state governments), private (26% through a self-taxing special service district from existing development and future development) and civic (26% through the Georgia Tech Foundation and corporate, family and individual foundation donations) sources.

The project is expected to create 14,000 to 17,000 construction jobs, 45,000 to 55,000 permanent jobs, up to 20 million square feet of “but for” commercial and residential development, increase real estate values by more than 15%, provide $24 million in net-positive economic impact to local governments and, over 20 years, have both a six-to-one ratio direct transportation return on investment and a total economic benefit of $20 billion for the state.

According to the video, the project’s foundation will raise $18.8 million in its first year and $30.4 million in its 20th year for operation and maintenance costs. Morris said about $13 million in donations and state funding has been raised so far to pay for its feasibility phase, which will cost about $24 million and “will produce all the necessary studies, documents and approvals to become ‘shovel-ready.’”

According to the video, the foundation has completed the first two years of a three-year feasibility study that began by establishing a nonprofit foundation to lead the project’s activities. The second step, also done, was to establish a “problem statement and functional needs for the project.”

Step three, which was scheduled to be finished March 21 but is not complete yet, was to “develop conceptual plans and build economic case for delivery.” Morris said that phase should be done “in the near future.” The fourth step, which has already begun, is to move to the “shovel-ready” stage with engineering, environmental, urban design and air rights control, starting with a capital campaign to address costs and funding.

The fifth and final step, which is pending, is to finalize the project’s delivery costs, schedule and methods and to finish its capital campaign. According to the video, the budget decision-making process will start in 2022 and construction could commence the following year. Through a public-private partnership, it would be built over three years and could open by the end of 2025.

According to the video, the project would improve Connector traffic by up to 13% southbound and as much as 37% northbound, with the overall intersection performance bettered by 60% in the study area. Vehicle crashes at Connector entrance and exit ramps would drop by 52%, and Midtown-area road and intersection wreck rates would decrease by 15%.

The project would also widen the crossing-street network by 100%, cause six of 10 Midtown intersections to perform better and more safely, increase the local area road network by 150% and add more than 3.5 miles of interconnected bike/pedestrian access.

Throughout the park portion of the project, there will be both a ground-level trail and an elevated, snake-like pathway that will go over cross streets. Other amenities include two playgrounds, a children’s garden, a dog park, two cafes and a 4,000-seat amphitheater.

After GDOT hosted a July 27 through Aug. 5 virtual public information open house meeting, where 4,177 individuals participated and 230 submitted comments, the MCP Foundation and Morris crafted a letter answering questions to address residents’ concerns. Morris said the organization took the input to heart as it continues to make tweaks to the project’s design.

“The feedback … has helped us to shape our focus on five areas which we treat as principles that will guide and shape all our design development and delivery decisions going forward,” he said, referring to equity, ecology, environment, experience and economy.

The Midtown project is one of three similar Atlanta park-over-highway proposals in the planning stages, with the other two being The Stitch, which would cover the Downtown Connector just south of Midtown, and Hub404, which would go over Georgia 400 in Buckhead, Morris said he’s sure the Midtown project will be completed on time, despite the cost.

“We are confident that through the use of a public-private delivery method supported by a broad mix of public and private funding sources, including federal and state dollars and civic, private and philanthropic contributions, we can complete the project in the timeframe outlined,” he said.

Morris added he hopes as many individuals as possible can view the video and comment on the project.

“Their input is vital to the success of this project,” he said. “We believe this project can be transformational, addressing many of the challenges our community currently faces around transportation infrastructure, equitable access to greenspace, and economic growth and opportunity.”

To watch the video and submit comments, visit https://abetterconnector.com/community/greener-heart/.

Hub404, formerly known as the Park Over Georgia 400 project, remains on hold due to the COVID-19 pandemic, and its completion has been pushed …

If there is a silver lining to this aggravating pandemic, it’s a deeper connection to nature.

The city of Atlanta and MARTA are addressing their affordable housing issues in a major way, with each devoting up to $100 million in bonds or…

For a billion dollars make Northside Drive limited access as a bypass.