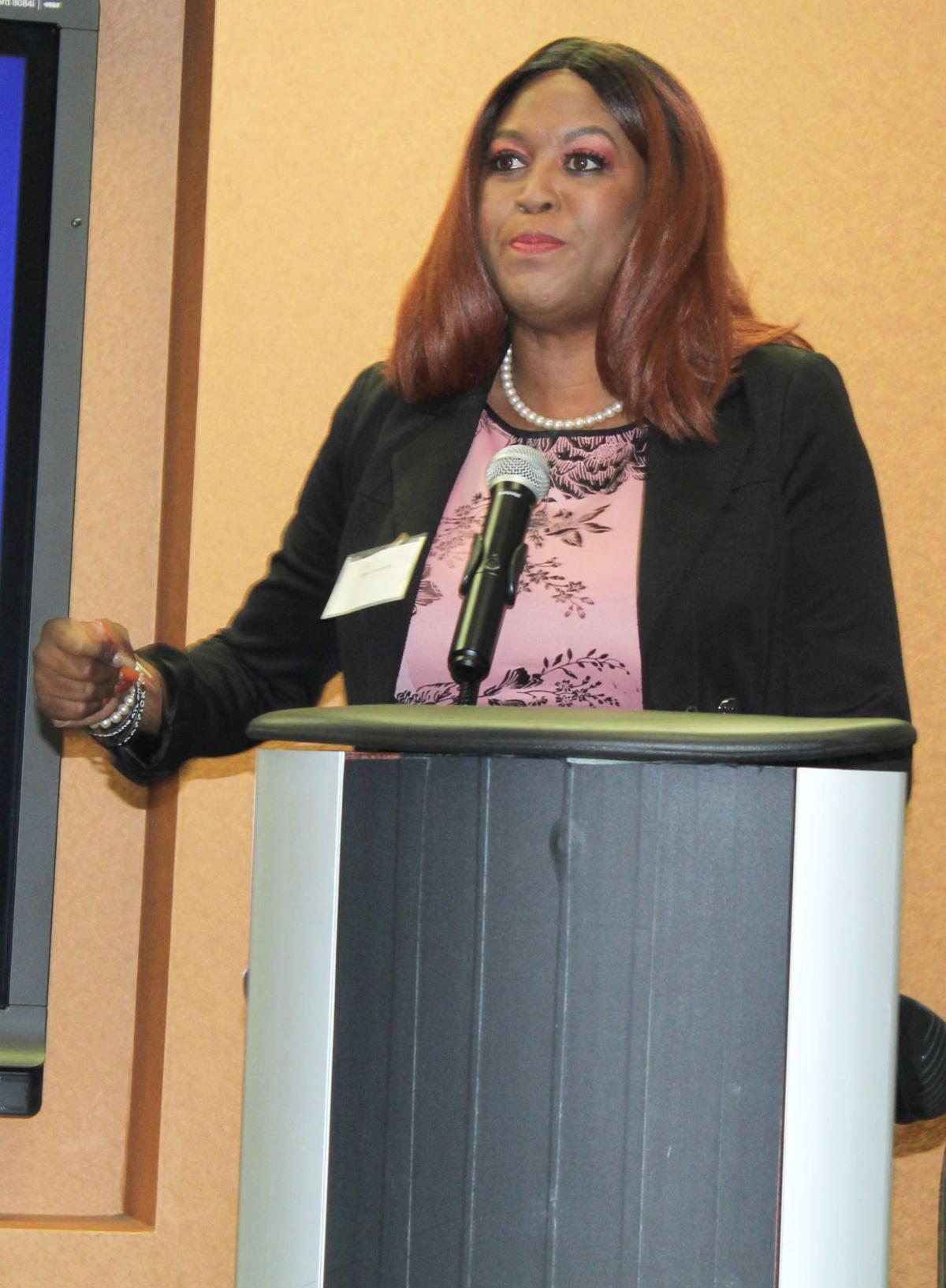 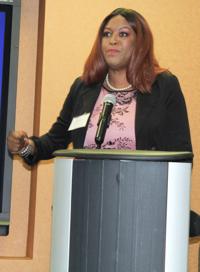 Shawn Smash-Jett, who survived human trafficking while working as a dancer at a strip club in Detroit, speaks at the Rotary Club of Atlanta’s weekly lunch meeting Oct. 29 at the Loudermilk Center downtown. 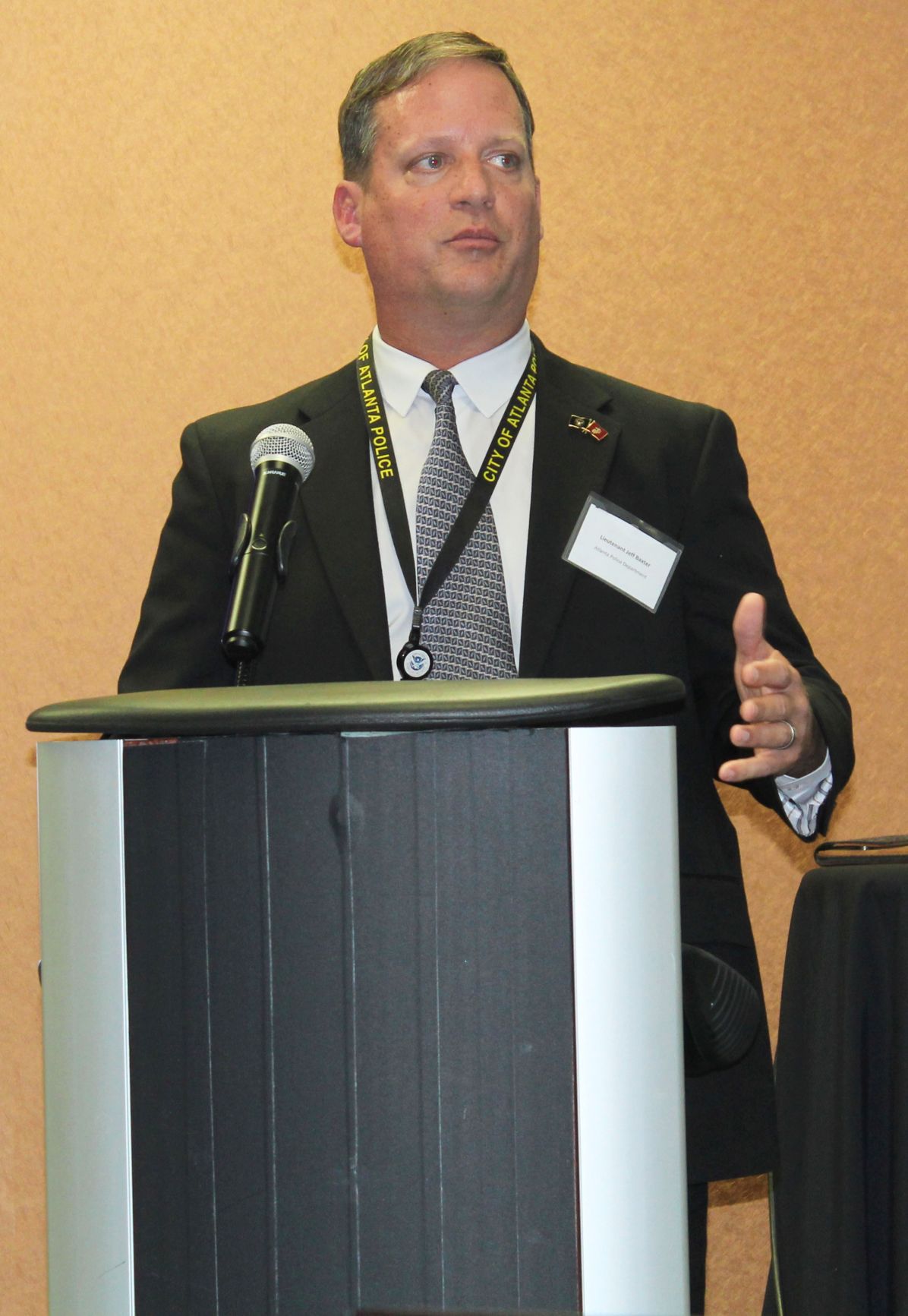 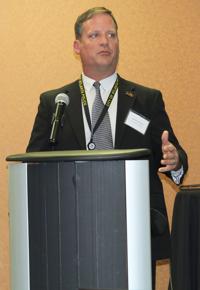 Shawn Smash-Jett, who survived human trafficking while working as a dancer at a strip club in Detroit, speaks at the Rotary Club of Atlanta’s weekly lunch meeting Oct. 29 at the Loudermilk Center downtown.

Lt. Jeff Baxter, who commands the Atlanta Police Department’s special victims unit, said stopping human trafficking isn’t as glamorous as some TV shows and movies make it out to be.

“When it comes to dealing with human trafficking, it’s not pretty. Liam Neeson is not going to kick the door down and save the day,” said Baxter, whose unit includes a human trafficking subunit. “It’s gritty. It’s dirty. It’s tough. It takes a spark. It takes a victim willing to come forward and talk to us. People don’t always want to talk to us because of trust issues.

“It takes that spark of someone coming forward and saying this is what we need to do. Whether it’s a flight attendant on an airline or a person working in a brick-and-mortar business, the more training (witnesses) can get on recognizing these things, the better. They can help us.”

He was one of seven individuals who spoke on the subject at the Rotary Club of Atlanta’s anti-trafficking business roundtable luncheon Oct. 29 at the Loudermilk Center downtown. It included a panel discussion on human trafficking, its third and final one of the year.

The program was hosted by Ted Blum, the club’s anti-trafficking committee chair and managing shareholder for the Greenberg Traurig law firm’s Atlanta office in Buckhead, and Bob Rodgers, president and CEO of Street Grace, a Norcross-based nonprofit collaborating with faith, business and community leaders providing a comprehensive path to end the sexual exploitation of minors.

In Georgia there are an estimated 3,600 children sold for sex annually. Baxter, who spoke prior to the panel discussion, credited his department’s victim advocates and the mayor’s and district attorney’s offices for helping solve these crimes.

“Our most recent case was three weeks ago,” he said. “We got a conviction (against) a human trafficker. The individual was 25 years old. He received a life sentence with 40 years to serve, and after those 40 years he would remain on intensive probation.”

Vinings resident Shawn Smash-Jett also spoke before the panel discussion. Growing up in Detroit, she said she thought the only way to a better life was to work as a nude dancer at a local strip club, Cantaloupes.

“I came from the east side of Detroit, and someone raped and molested and left me for dead at age 3, putting me in a coma for six months,” she said. “Once you’ve experienced that, you don’t expect anything else coming from your life. Once you are of age, you realize this is a drug-infested place (I’m living in). I made the decision that in order for me to get out, I was going to be in the strip club. That was my only way out.

“My only other option was to go to college or marry my high school sweetheart, but I didn’t have money to go to college,” said Smash-Jett, who planned to wed her boyfriend after he completed Army basic training.

While employed at Cantaloupes, she became a victim of human trafficking through her job.

“I was made to do several things I wasn’t wanting to do,” she said. “The strip club isn’t what (it appears to be) . Girls aren’t there because they want to be. They’re there because a pimp or a predator is sitting on the side to ask them to do things. You’re making money for the person at the door, the bartender, the manager. You’re giving them a cut of everything (you make).

“I was tagged with a young lady named Tiger. She was hosting little side parties for us to make a little extra money. Tiger didn’t make it out. My best friend was killed. Wherever she went to perform at this particular time, she never made it back.”

One night while Smash-Jett was having dinner with her fiancée’s family at a Ryan’s restaurant, two Cantaloupes customers recognized her as her stripper ego, Flame, and said hello.

Smash-Jett, who added she thinks “God had his hands on me” to help save her, has since helped others escape human trafficking.

Two years ago the club began the task force. Blum said he and Delta Airlines Ed Bastian started partnering together in 2018 to bring Atlanta companies’ CEOs together to fight human trafficking. They also held a business summit in June 2018 with about 50 companies’ CEOs representing more than a million employees to further collaborate on the efforts.

“We want a snowball effect, to get this effort to fight trafficking bigger, stronger and more formidable,” Blum said in a speech before the panel discussion.

In January Greenberg Traurig’s Atlanta office announced its partnership with the Wellspring Living Women’s Academy, a 10-week program in which participants get career training, followed by a 12-week apprenticeship at Atlanta several companies and organizations.

Wellspring Living is an Atlanta-based nonprofit offering residential and community-based programs for women survivors of sexual abuse, trafficking and exploitation. Through the program, Blum said, some of the interns were hired at his firm as regular employees.

In an interview before his speech, Blum was asked why he’s passionate about tackling human trafficking.

“I don’t believe in the 21st century we should have slavery flourishing, and … we should attack it,” he said.

In an interview before the meeting, Rodgers, who spoke before and during the panel discussion, said Street Grace wants to inform children on human trafficking before it’s too late.

“Our primary mission is on the prevention (side), eradicating the demand of the sexual exploitation of our children,” he said. “So our focus is how to do that, primarily through prevention. We do education and training for over 100,000 kids a year, then policy work and then the pursuit of the buyers of sex and traffickers. Everything we do, our … strategic aim is to dismantle the illegal business.”

Rodgers moderated the panel discussion, where three individuals spoke on the topic. Ouleye Warnock, senior human trafficking fellow with Atlanta Mayor Keisha Lance Bottoms’ office, said she was the second person hired by a city in that new position, with Houston being the first.

Myrna White, director of public affairs for Hartsfield-Jackson Atlanta International Airport, said the facility has about 63,000 employees and about 300,000 visitors daily. The workers have undergone quarterly training on human trafficking since 2015, when the Atlanta City Council approved legislation mandating it.

“If you’ve been through the airport and heard the announcements through the public address system, (you’ll hear) human trafficking is a major problem we want people to be aware of,” she said, adding the airport is asking visitors to report suspicious activity. “If you see something, say something.”

Bruce Hamilton is vice president for labor and employee relations with Dunwoody-based IHG, a hotel company that owns 4,200 hotels in the Americas. He wore to the event a button that says “No Room for Trafficking,” which is promoting the American Hotel & Lodging Association’s campaign on keeping human trafficking out of all hotels and motels.

In August four hotels in Alpharetta, Chamblee, Sandy Springs and Smyrna were named in four lawsuits that allege they took part in sex trafficking there. Though none of those hotels are owned by IHG, Hamilton said the company is working to train its owners and employees to recognize human trafficking.

“We went beyond training our staff,” he said. “We trained our vendors. We had an experience earlier this year where a contracted valet parker, not our employee but one of our vendors, didn’t see something right when they were unloading luggage. It resulted in the arrests of multiple people involved in human trafficking.”

Hotels in Alpharetta, Chamblee and Sandy Springs have been named in four lawsuits that allege they and one other metro Atlanta hotel took part…

Al fresco dining could be moving closer to the street, including onto sidewalks, at some restaurants in the city of Atlanta in the future.

Have you seen this missing woman? If so, call the Atlanta Police Department

The Atlanta Police Department has announced a woman is missing and seeks the public’s help in finding her.

The Atlanta Police Department has arrested a Buckhead restaurant robbery case suspect who was an employee at the eatery.

Voting focus could be legacy for latest wave of NBA activism