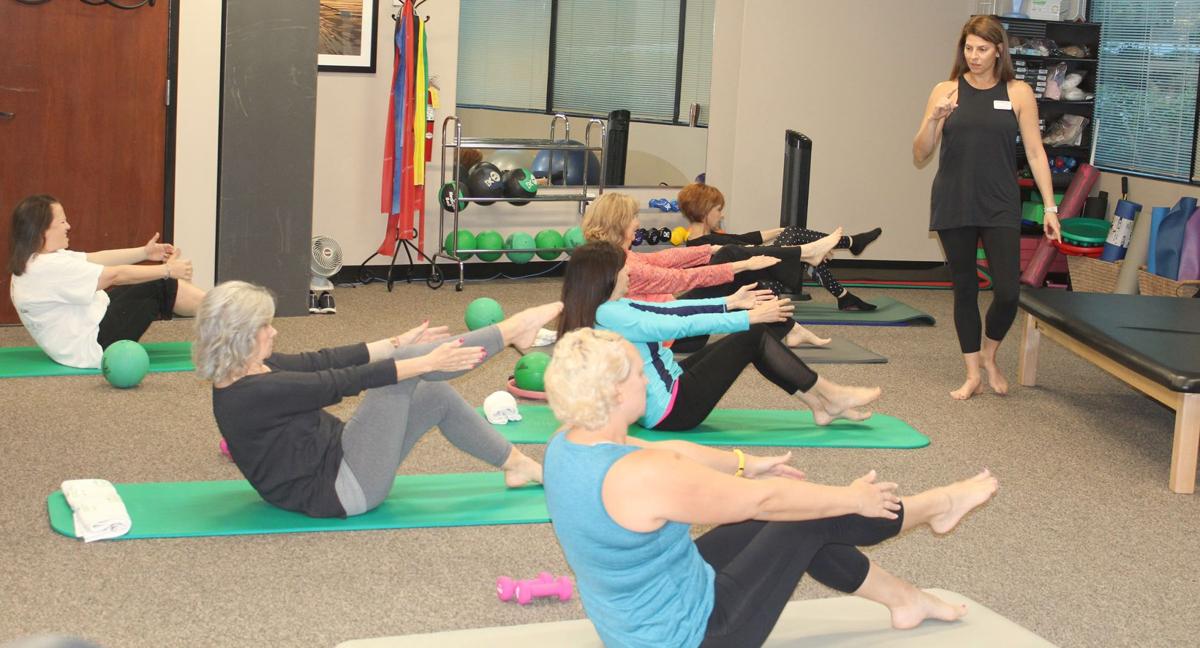 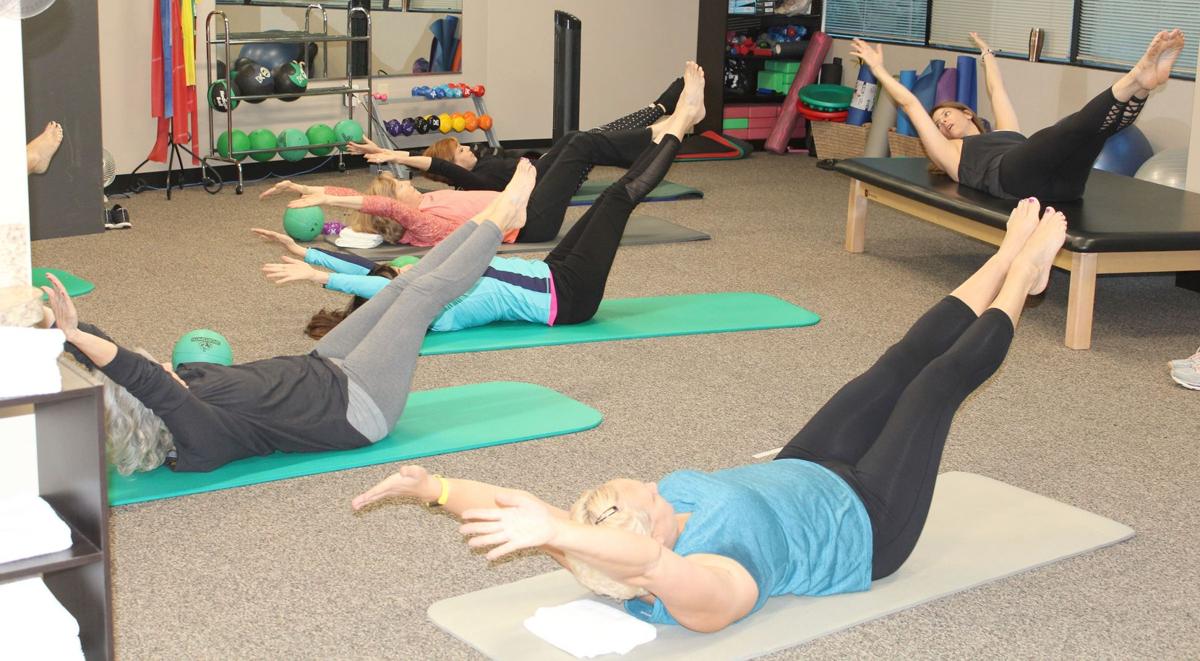 This article was updated Oct. 24 at 12:25 p.m. with additional information on the class and on the benefits exercise has on cancer survivors.

TurningPoint, a nonprofit supporting breast cancer patients with a variety of programs, began the class shortly after moving to its current office space in 2013. Friedman took the class after being diagnosed with breast cancer the previous year.

“I was going to physical therapy here and had been offered the class and wanted some kind of exercise,” the Dunwoody resident said. “At first it was my only exercise, but also I wanted to stretch and I needed to get better mobility and strength in my arm.”

Friedman, like the other women taking the class, discovered it was much more than just an opportunity to exercise each Wednesday morning and regain the strength she lost from surgery and treatment. It helped her break down the figurative walls she surrounded herself with after the operation.

“When I was diagnosed I was kind of like a closed-off box and I was young when it happened, so there (weren’t) many people I knew who (had breast cancer),” said Friedman, who was 39 when she was diagnosed. “… But coming here just made me open up a lot more, I would say, because the people understand what you’re going through. It’s not just the physical therapy. It’s the talking. It got me talking. It got me adapting to what was going on in my life.”

Roswell resident Gittel Price, who also started taking the class from the beginning, shortly after her diagnosis in July 2013, had a similar experience.

“My plastic surgeon suggested it and said there’s a place you can go,” she said. “I came in and it was so friendly and so helpful. If I didn’t have it, I’d be like this (weak) on the sofa, afraid that if someone hit me, I was going to fall apart.”

Price, who has had seven breast cancer-related surgeries overall, calls the class “a place where you can feel comfortable.”

“They understand what you’re saying,” she said of her classmates. “If you’ve got a lightning pain under your arm, everybody else does, too. Things like that. So it’s really wonderful, like a sisterhood here. They teach you how to eat, what to eat, exercises, how important everything is. We have classes all the time here, Pilates and other ones.”

Friedman could not agree more.

“Everyone’s been through what you’ve been through so they all understand the aches, the pains, the emotional (issues that go along) with it,” she said. “... Everyone has the same background.”

Lauren Bober, TurningPoint’s clinical manager, has taught the class since its inception and also is a physical therapist and certified edema therapist.

Unlike her students, Bober has never had breast cancer, but her mother, Esther, was diagnosed with it and later died of appendiceal cancer. Her mom’s breast cancer diagnosis influenced her to change her field of study in physical therapy school from sports medicine to oncology.

“I realized when she was in the hospital, there wasn’t a (physical) therapist to come treat her for all her pain and range-of-motion issues, her overall de-conditioned body, so I was her physical therapist as well as her daughter,” said Bober, an Alpharetta resident. “When she passed away, I … started working with Jill Binkley, who was the founder of TurningPoint.”

She said the class was started for two reasons, starting with camaraderie.

“We know that group fitness makes a big difference in women who are going through breast cancer treatment,” Bober said. “It’s a way to connect to others who have gone through similar issues in an environment that’s relaxed and calm and everybody understands what everyone else has through. … It (also) helps with quality of life, mental(ly) just feeling better overall.

“Another main reason we started the class is there’s a lot of weakness post-breast cancer treatment or during breast cancer treatment. So women who are currently involved, whether it’s chemotherapy, radiation (or) post-surgical treatment for breast cancer, they tend to have a decent amount of range-of-motion issues in their shoulders, weakness in their core, weakness in their shoulders as well, pain, dysfunction, issues with activities of daily living, and Pilates is a class that focuses on the strengthening of your core, primarily.”

But the class also helps breast cancer survivors return to a normal quality of life.

“They’re able to pick up their child because they have core strength that they might not have had before,” Bober said. “It also helps with overall body awareness, which is something that can be problematic with women who are going through breast cancer treatment as well.”

Price said she feels lucky to have access to the class since her friends who also survived breast cancer don’t have it where they live in other states.

“I feel really bad for them because it helps me so much,” she said. “I think you go into a depression (after diagnosis). … There’s so much you go through because I thought after you have surgery and have the breasts removed and have the plastic surgery, you look good. But I had a hole in my chest. It was surgery after surgery. Though a lady in there has had 11 surgeries, so I can’t complain about my seven.

“You just think if that ever happens to you, you have the surgery, you hope to survive, and you never thought all of that stuff would be in your mind. You come here and it’s laughter and happiness and you can talk about everything and cry about everything, plus the physical therapy.”

On the day the Neighbor visited the class, six women participated, but Bober said it averages 13 women a week and ranges from eight to 20. She said all women going through breast cancer treatment should exercise regularly, and recent studies, including one conducted by an American Cancer Society expert panel, show its benefits in increasing survivors' lifespans. Bober added the women in this class are “incredible.”

“I have seen such a change in their posture, their strength, their function, how well they move at this point,” she said. “To hear them say things like, ‘I don’t get as tired anymore’ or ‘I can sit at my desk for eight hours and I feel good’ (is wonderful). To hear them talking about starting (slow) even in terms of an aerobic capacity, their aerobic capacity has increased so much. So these are some pretty incredible women, and many of them have been in the class since its inception in 2013. They are dedicated.

“They come every Wednesday to not only see each other but to encourage each other. We celebrate everybody’s wonderful things happening in their lives, and then we also cry for those who have issues or problems in their lives. So we’ve really become a bit of a family in a way. To see the overall physical and mental change in all of them, from when they started the class, no matter when it was during their cancer treatment, to now, it’s been quite an incredible ride.”

Sonoraville Elementary School lunch lady Christy Nicholson is a beloved figure in Gordon County. When she was diagnosed with breast cancer in December 2018, the school system hosted fundraisers on her behalf, Principal Amy Beason had T-shirts made and sold to help pay for treatment, and both current and former students flooded her with cards and messages of support.

The Community Assistance Center is opening a Dunwoody office

The Sandy Springs-based Community Assistance Center, which serves the poor in that city and Dunwoody, has announced it plans to open a new bra…