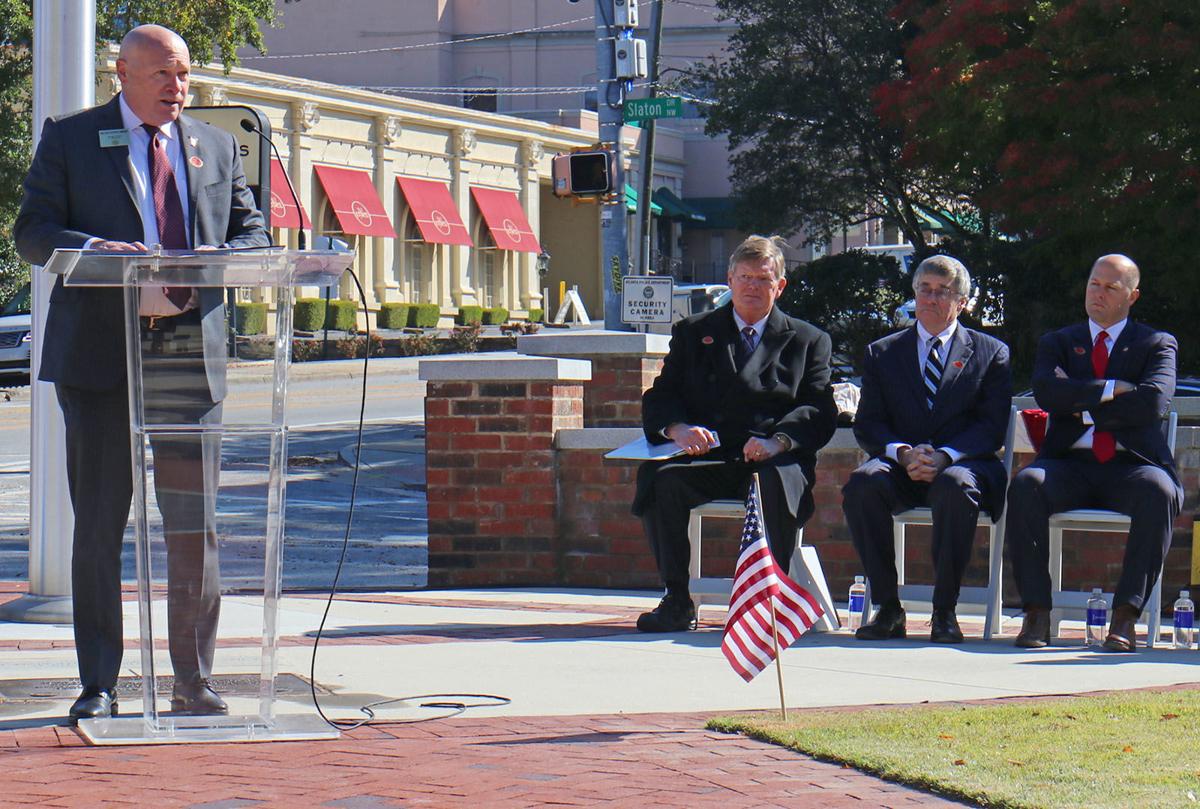 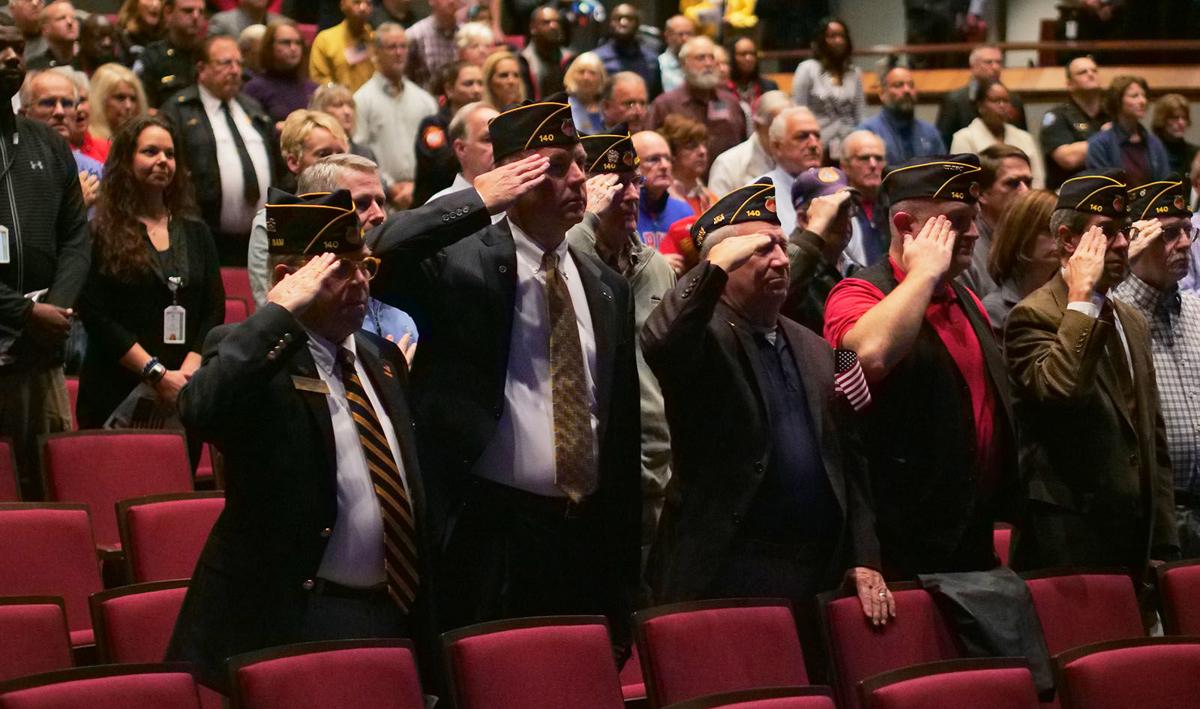 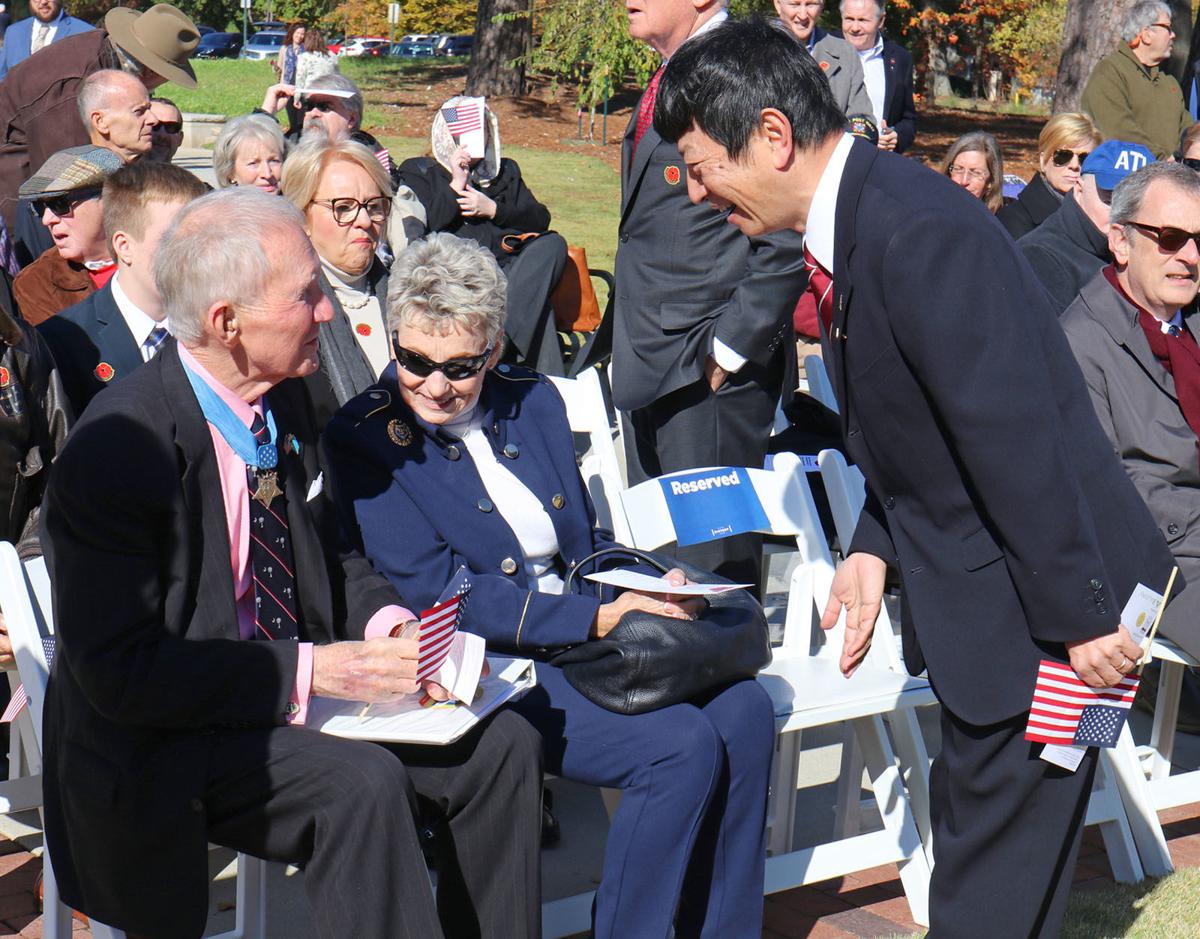 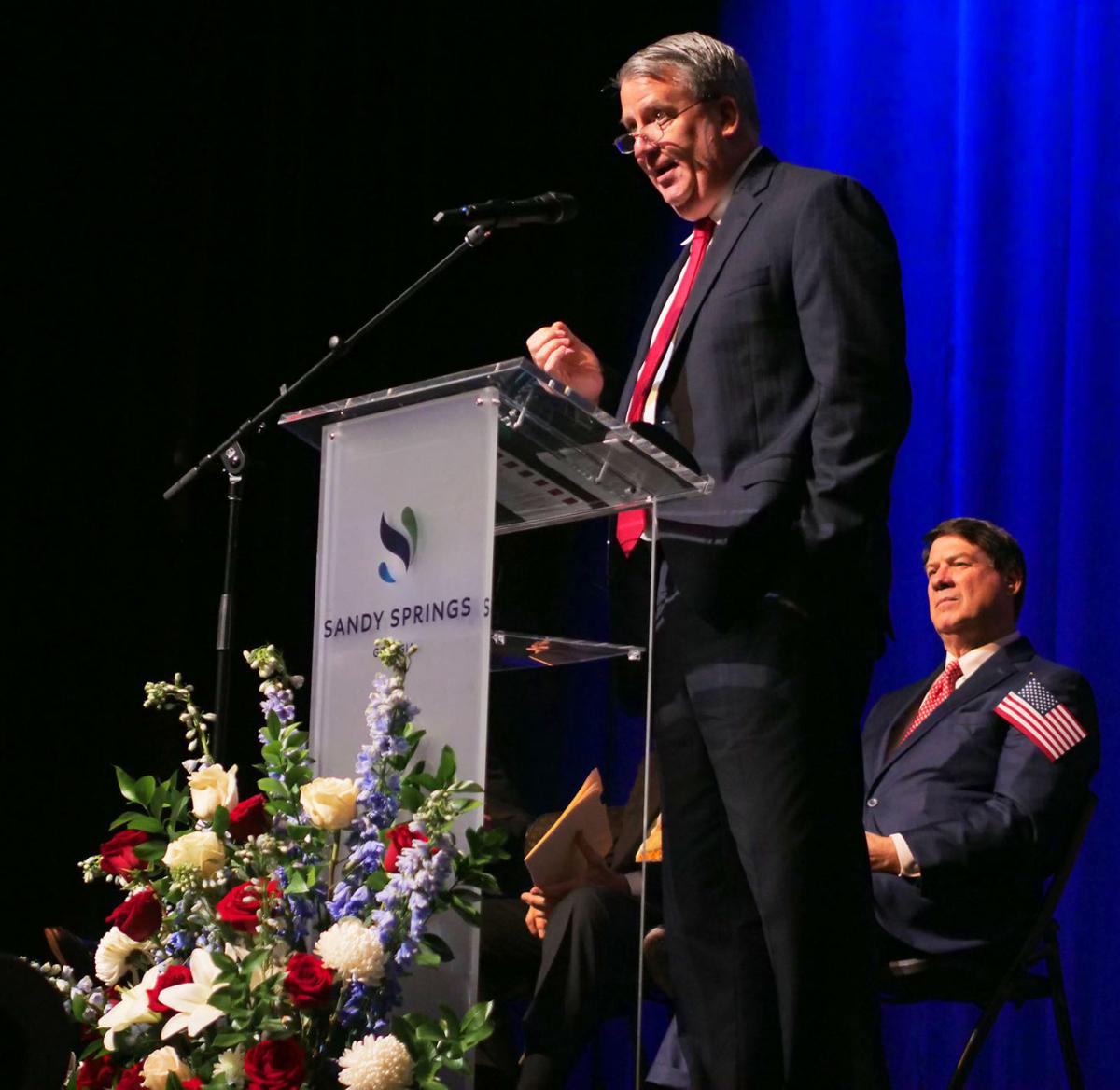 This article was updated Nov. 11 at 4:59 p.m. with information on the YMCA's Veterans Day offer.

With Veterans Day coming Nov. 11 and being observed starting the weekend before that, numerous activities are being planned in Atlanta and Sandy Springs to honor military veterans.

Veterans Day was created with the armistice that ended World War I, which called for a ceasefire in 1918 effective at the 11th hour of the 11th day of the 11th month, which became Veterans Day.

The World of Coca-Cola in downtown Atlanta grants complimentary admission to all military members (active duty, reserves and retirees) year round, but to show gratitude on Veterans Day to those who serve our country, the attraction is extending a special offer to their loved ones as well.

Nov. 1 through 11, members of the Armed Forces may purchase up to four half-price general admission tickets for their friends and family to join them in visiting the attraction. Tickets may be purchased with a valid Armed Forces ID card at the attraction’s ticketing windows.

Thanks to the generosity of The Home Depot Foundation, the National Center for Civil and Human Rights in downtown Atlanta will offer free admission to all veteran military personnel with proper identification Nov. 9 through 11. Proper identification includes: copy of form DD214, Veteran ID card, driver’s license with “Veteran” on it or a Military ID card issued by the Armed Forces.

Free admission tickets are not available online. Veterans looking to take advantage of this special offer will have to do so by walking up to the ticket box office. Accompanying family members will receive a 20% discount on admission.

The Rockler Woodworking and Hardware store, 6690 Roswell Road in Sandy Springs, will host four veterans pen-turning events Nov. 9 every two hours starting at 9:30 a.m. For $10, participants can turn their own pen to take home, and Rockler will donate 100% of the proceeds to the National Veterans Foundation.

Because pen turning is relatively simple, it’s ideal for anyone who wishes to participate, including those with little or no prior woodworking experience. The foundation operates the only toll-free helpline for all U.S. veterans and their families for crisis management, referral needs and other services.

The 38th annual Georgia Veterans Day Parade will take place in downtown Atlanta Nov. 9 at 11:11 a.m. It will begin on Peachtree Street south of Ralph McGill/Ivan Allen Boulevard and end on Marietta Street at the Centennial Olympic Park Drive intersection. The parade will pass directly in front of World of Coca-Cola, where the reviewing stand will be located, on Baker Street.

Following the parade Nov. 9, a free Veterans Day Festival will take place from 12:30 to 2:30 p.m. in Pemberton Place, just outside of the World of Coca-Cola in downtown Atlanta. The festival is open to the public and will feature a variety of exhibitor tents, as well as a performance by the 116th Army Band.

Nov. 11 through 13, participating Shane’s Rib Shack locations will be honoring military personnel and veterans during its Military Appreciation Week and providing service men and women with a free sandwich combo.

“We invite all veterans and active military personnel to enjoy a complimentary meal with their family on us as a token of our appreciation for their service,” said Colby Cameron, franchise operator of Chick-fil-A Windward Parkway in Alpharetta.

At participating Zaxby's locations, on Veterans Day the restaurant is offering one free Southern TLC Fillet Sandwich to all veterans in uniform or showing his or her valid military ID.

In honor of Veterans Day, all metro Atlanta YMCA locations will offer military veterans no enrollment fee Nov. 11 through 17. Service credentials in the form of Military DD213 are required in person at the time of joining. The Y offers programs and services for all ages, from swim lessons and youth sports to wellness classes, educational opportunities and senior programs,

The city of Sandy Springs will host its 10th annual Veterans Day Celebration Nov. 11 at 11:30 a.m. at the City Green park. It is free and open to the public.

In honor of Veterans Day, the Children’s Museum of Atlanta, 275 Centennial Olympic Park Drive in downtown Atlanta, will host several family events to honor veterans Nov. 11 from 10:30 a.m. to 3:30 p.m. The Imaginators will read “Veterans: Heroes in Our Neighborhood” and conduct a Veterans Day parade as part of the Music & Movement program.

This Veterans Day from 11 a.m. to noon, the Historic Oakland Foundation will offer a special military-themed tour of Oakland Cemetery. Discover the stories of men and women who fought for this country and for democracy abroad. This guided walking tour will focus on World War I veterans.

Tickets are $12 for adults, $6 for senior citizens and students and free for all military members (active duty, retired or honorably discharged) and foundation members. Veterans must show current ID card for active duty or retired or a DD 214 (proof of release from the military) to take advantage of this offer. Spaces are limited.

Note that not all areas of the cemetery are wheelchair accessible. Please use your discretion when planning your tour visit and call 404-688-2107 if you have questions about accessibility.

The Atlanta History Center in Buckhead will commemorate Veterans Day with a program Nov. 11 at 11 a.m. It is free and open to the public.

Retired U.S. Navy Rear Admiral Wendi B. Carpenter, a pioneer who completed her 34-year military career in 2011, will give the keynote address. The ceremony will include a bagpipe presentation by Wayne Coleman; patriotic songs performed by the 116th Army Band; and opera baritone Bill Killmeier signing the national anthem.

After the ceremony, guests can visit the Atlanta History Museum’s Allen Atrium to learn more about the center’s Veterans History Project.

A new documentary film being released on Veterans Day in Atlanta will be screened at the Plaza Theatre, 1049 Ponce De Leon Ave NE in Atlanta, at 7 p.m. According to a news release, the movie is likely to ignite renewed conversations about how best to care for our returning vets and their families.

“Homemade” follows the journey of decorated Force Reconnaissance Marine Adam Sorensen as he navigates civilian life and the effects of post-traumatic stress disorder, traumatic brain injury and crippling addiction on his marriage, family and work. “Heart-wrenching, winding, ongoing (the filmmakers following Adam and his family for six years, and the movie took seven years total to complete) and unflinching, the film uncovers a conflict between the American ideals of success and personal well-being,” the release stated.

The Atlanta screening is one of several for “Homemade” in cities across the country, including Portland and Washington. Each one will be followed by a panel discussion and question-and answer session featuring local veterans’ advocacy and support groups and addiction specialists.

There are an estimated 1.1 million military caregivers who are family members, friends or acquaintances in the United States caring for post-9/11 veterans. Studies show that at least 20% of Iraq and Afghanistan veterans have PTSD and/or depression. The number climbs higher when combined with traumatic brain injury (TBI). 19% of veterans may have traumatic brain injury (TBI) and 50% of those with PTSD do not seek treatment.

As part of its yearlong 85 Acts of Kindness campaign in honor of its 85th anniversary, Georgia’s Own Credit Union will partner with Free Bikes 4 Kidz this Veterans Day in downtown Atlanta to build bikes for the children of veterans.

Georgia’s Own will bring together its entire workforce of nearly 400 employees to unbox and build 85 new bikes in lightning-quick speed. Broken into teams of five, the bikes will be constructed and then personalized by each team, ultimately being delivered to underserved children of veterans in early December, just in time for the holidays.

While the city of Atlanta has taken significant steps to find permanent residences for homeless veterans, there is still a need to help military families close the opportunity gap. Bikes serve the dual purpose of transportation and recreation for the youngest members of these families.

Dunwoody-based IHG (InterContinental Hotels Group), one of the world’s top hotel companies, is celebrating hospitality for heroes this November in honor of Veterans Day and National Veterans and Military Families Month. As part of the campaign, IHG will mark the 10th anniversary of IHG Army Hotels – a unique portfolio of hotels located on 40 U.S. military installations in the U.S. and Puerto Rico, which provide services and amenities tailored to meet the needs of military travel.

Through Nov. 15, IHG Army Hotels invites eligible fans to nominate an important service member in their lives, including active duty, retired or veteran, during a new hospitality for heroes sweepstakes. To enter the sweepstakes on Instagram, simply follow @IHGArmyHotels, post a photo and caption of the member of the military recognizing them for their service, tag @IHGArmyHotels and include the hashtags #sweepstakes, #ihgah10, and #hospitalityforheroes. Fans can also enter by emailing a photo and caption directly to IHGAHSweepstakes@ihg.com. IHG will select five winners to win 200,000 IHG Rewards Club points at random.

In honor of local veterans, Christian City in Union City is planning a week filled with events and activities that will be open to the public.…