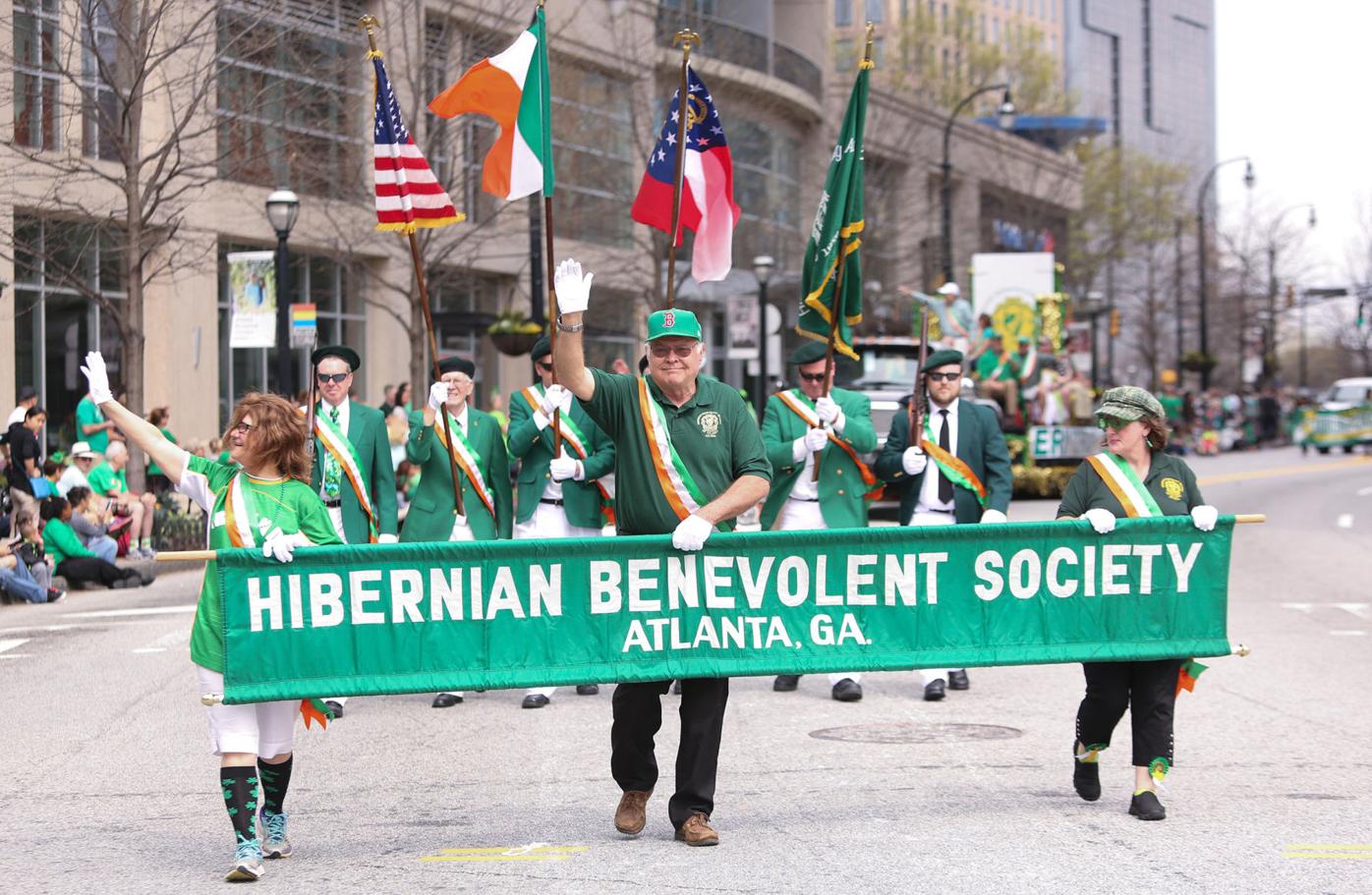 Members of the Hibernian Benevolent Society of Atlanta march in the 2018 Atlanta St. Patrick’s Day Parade. 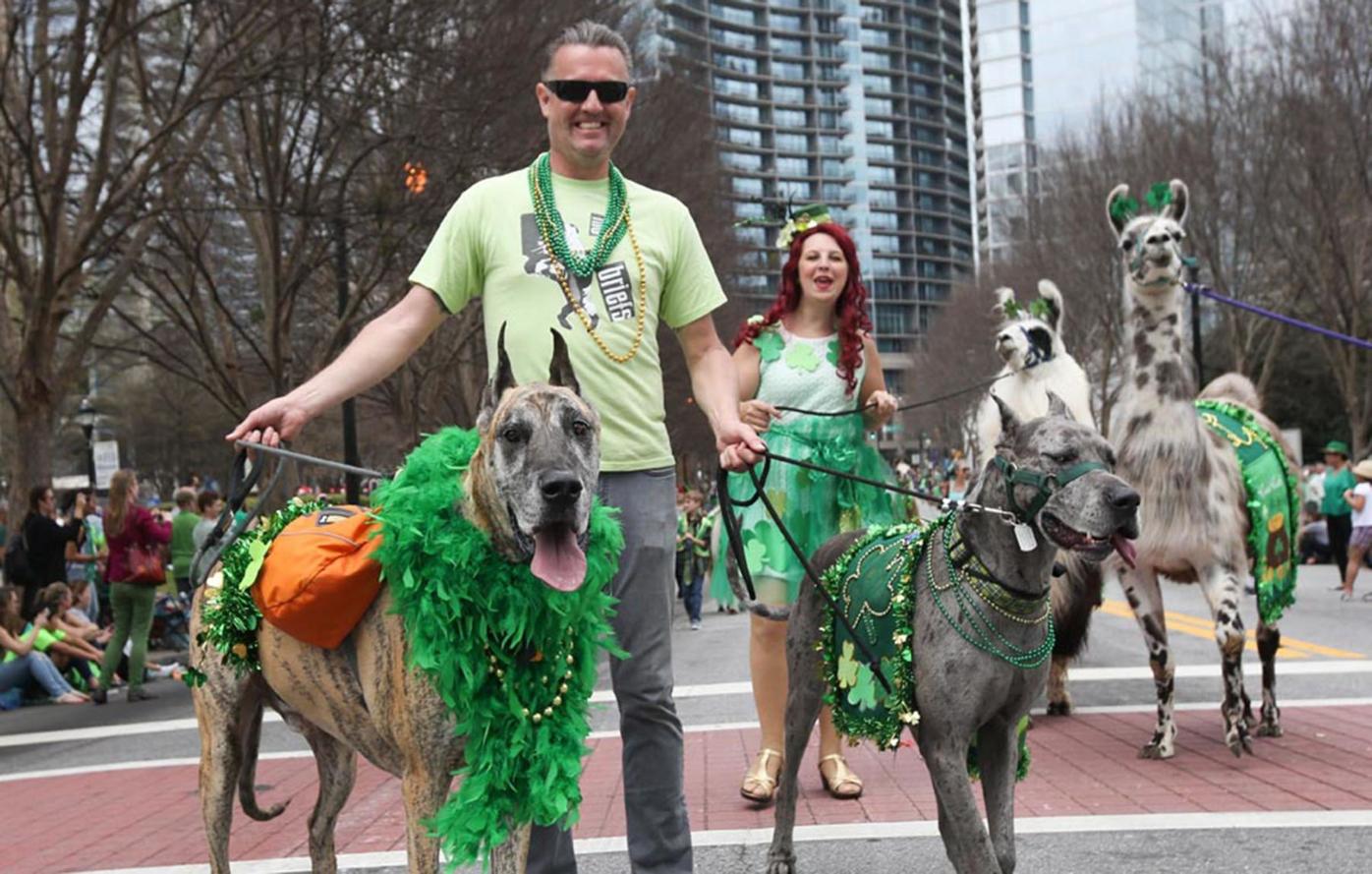 Decked out in green, residents walk with their dogs and their llamas in the 2018 Atlanta St. Patrick's Day Parade. 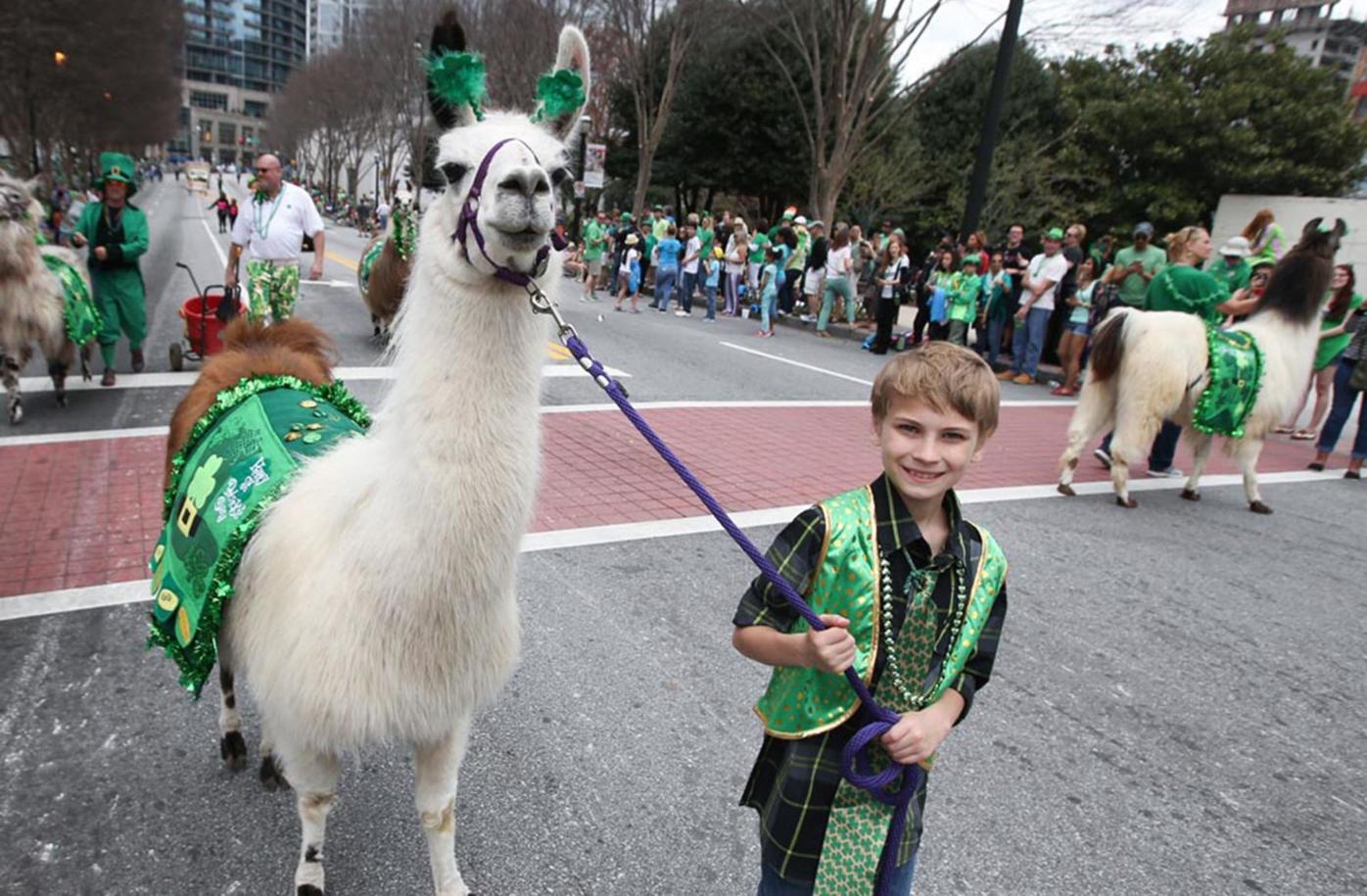 Decked out in green, a boy representing the Southern States Llama Association walks with his llama in the 2018 Atlanta St. Patrick's Day Parade. 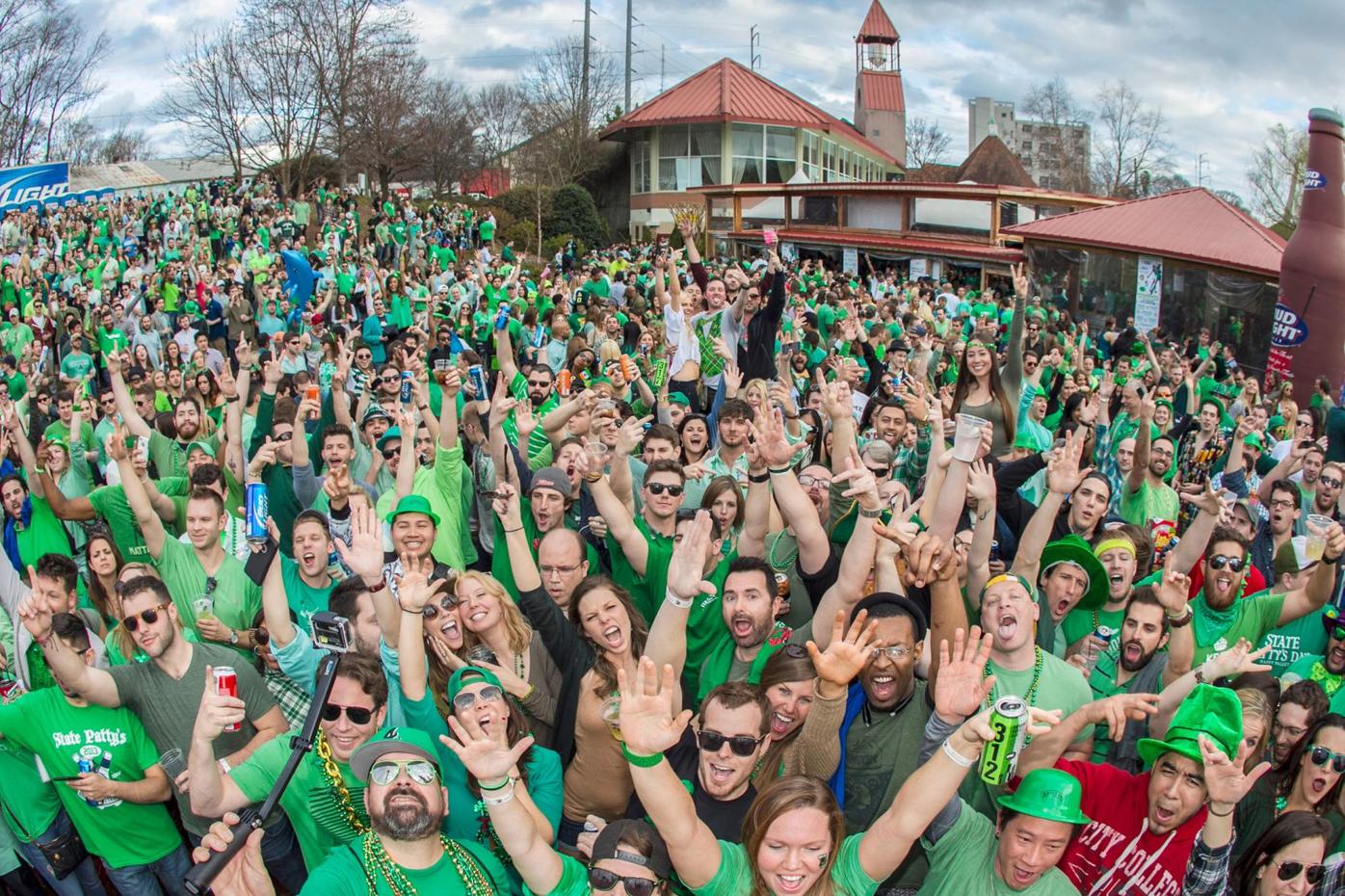 Attendees enjoy a previous Irish Lights Festival at the Park Tavern in Midtown.

Members of the Hibernian Benevolent Society of Atlanta march in the 2018 Atlanta St. Patrick’s Day Parade.

Decked out in green, residents walk with their dogs and their llamas in the 2018 Atlanta St. Patrick's Day Parade.

Decked out in green, a boy representing the Southern States Llama Association walks with his llama in the 2018 Atlanta St. Patrick's Day Parade.

Attendees enjoy a previous Irish Lights Festival at the Park Tavern in Midtown.

This article was updated March 17 at 1:46 p.m. with news that the Atlanta St. Patrick's Day Parade and related festivities, plus the Shamrock 'N Roll Road Race, all have been cancelled due to concerns over the coronavirus.

There are lots of ways residents of Buckhead, Brookhaven, Sandy Springs and Vinings can celebrate St. Patrick’s Day, from adult-only events to ones devoted to families and to children.

Here’s a rundown on those events:

A Social Mess will host its 11th annual Irish Lights Festival March 7 from 3 p.m. to close at the Park Tavern, 500 Tenth St. in Midtown. The event will include a glowing green dance floor and high-energy DJ Keys N Krates headlining. Multiple areas of entertainment will be set up with a variety of DJ’s spinning tropical house, EDM, deep house, progressive house, pop n rock and open-format music.

General admission tickets start at $23, and VIP tickets and table reservations are also available. Attendees must be 21 years of age, and there are no refunds.

For residents who plan to host their own St. Patrick’s Day parties, 12 Cocktail Bar, located at The Roof at Ponce City Market in Atlanta’s Old Fourth Ward, will host a special St. Patrick’s Day cocktail class March 13 at 5:30 p.m. It will be led by Randy Hayden, The Roof’s award-winning barmen and beverage director.

Tickets are $75 and include instructions on making four holiday-inspired craft cocktails, complimentary cocktails, one-on-one demonstrations with Hayden, four cocktail recipe cards to take home and a class certificate of completion. Seating is extremely limited, so attendees are asked to sign up in advance.

The 16th annual Shamrock ‘N Roll Road Race, which includes 10K, 5K and Kids 1K races, will be take place March 14 at Atlantic Station, and the event is also dog- and stroller-friendly. Attendees are encouraged to bring their entire family and friends to the St. Patrick’s-themed races. Registration check-in starts at 7:30 a.m., the 5K and 10K races begin at 8:30 a.m. the Kids 1K commences at 9:45 a.m.

Kilts and green tutus are encouraged. Prizes will be given for the top finishers, most spirited team and more. Registration ranges from $15 to $45 depending on the race. Proceeds from the race are used to finance aid projects and programs of the Junior League of Atlanta’s area community partners and to train and educate league members for effective community service.

The 138th annual Atlanta St. Patrick’s Parade is set for March 14 at noon. Starting at the intersection of Peachtree and 15th streets, it will continue down Peachtree to 5th Street and end at 1:30 p.m.

Those in attendance will see a variety of St. Patrick’s Day-related parade participants from Atlanta and across the Southeast, including floats, bands, bagpipe and drum corps, children, dancers, animal groups and drill teams as well as Irish and local dignitaries, including elected officials.

Prior to the parade, the sixth annual Parade 5K will start and finish at Colony Square in Midtown, with the race route going through Piedmont Park. The 5K begins at 9:45 a.m. Registration is $37 for adults, $22 for children 12 and under and $20 for the one-mile fun run.

Also, Colony Square will host the Luck of the Square festival, which will begin at 10 a.m. near the start of the parade route. The free event will include live music featuring Party Nation, beer and food plus dancing.

However, the parade and Luck of the Square were cancelled March 11 due to concerns over the coronavirus.

Rí Rá Irish Pub, 1080 Peachtree St. in Midtown, is hosting a block party March 14 from 11 a.m. to 10 p.m. on Crescent Avenue, which will be blocked off. There will be five bands, two DJs and traditional Irish dancers. Tickets are $20 and include entry to the pub and festival and one drink voucher.

The block party is part of Rí Rá’s six-day series of St. Patrick’s Day-themed parties that will kick off with the St. Baldrick’s Foundation head-shaving event March 12 at 5 p.m. That event will raise funds for childhood cancer research, and shavees will receive a Guinness glass engraving.

Both parties will have outdoor beer and cocktail stations and food trucks, Irish dancers, live music and a DJ. Tickets to the Buckhead party are $20 plus fees and party packs cost $35 and include one ticket and two big beers. Tickets to the Midtown party are $10 plus fees.

March 13 from 2 to 6:30 p.m., the Buckhead location will host its 19th annual St Baldrick’s Foundation head-shaving event, where attendees can shave their heads in solidarity with kids battling childhood cancer and donate to the foundation to help end childhood cancer.

Olde Blind Dog, an Irish pub with locations in Brookhaven and Milton, will host St. Patrick’s Day parties March 14 from 10 a.m. to 11 p.m. at both restaurants. Each event will include live music, drink specials and more, and tickets are $10 plus fees.

The Milton location will also host a St. Baldrick’s Foundation head-shaving event from 2 to 5 p.m.

The Park Tavern, 500 Tenth St. in Midtown, will present its annual Luckyfest event March 14 from 3 p.m. to close. Attendees are encouraged to wear green, and the event is for guests 21 and up. Entertainment includes live music with a lineup to be announced.

Tickets are $15 through March 5, $20 after March 5 and $25 at the door. Food and beverage tickets, which are not included with admission, cost $6 to $7 and can be bought at the event. Any unused tickets can be returned for a refund.

Even dogs can celebrate the holiday (St. Paw-trick’s Day) with the Rescue Dog Games – Atlanta’s Dog Festival and Party at Piedmont Park in Midtown, March 15 from 1 to 6 p.m. It will include interactive games for dogs and their human owners, dog play areas, pet rescue organizations offering opportunities to adopt a pet, music, a St. Paw-trick’s Day dog costume contest and a disc dog show.

The event spotlights pet adoption and pet rescue organizations, and proceeds go to those nonprofits. General admission tickets are free and VIP (Very Important Puppy) Experience tickets are $10, and preregistration is recommended. VIP Experience tickets include several amenities including free beer sampler tickets for owners and free items for their dogs.

Tickets are $13.95 for children and adults but free for kids under 1 year old.

Meehan’s Public House, which has locations in downtown Atlanta and Vinings, is not hosting a special party for St. Patrick’s Day but will be celebrating it through March 17.

Thos. O’Reilly’s Public House, the former Meehan’s location in Sandy Springs under new ownership, will host a St. Baldrick’s Day head-shaving and fundraising event for the foundation March 14 from noon to 4 p.m.

Update: Luck of Avalon canceled due to virus concerns

Alpharetta’s lads and lassies are invited to experience the “luck of the Irish” at Avalon’s sixth annual Luck of Avalon event.

One local gym is hosting a spin class as a way to raise funds for pediatric cancer research.

Polk Outreach Ministries gives back to community on Thanksgiving

Right to Farm debate likely to return to General Assembly