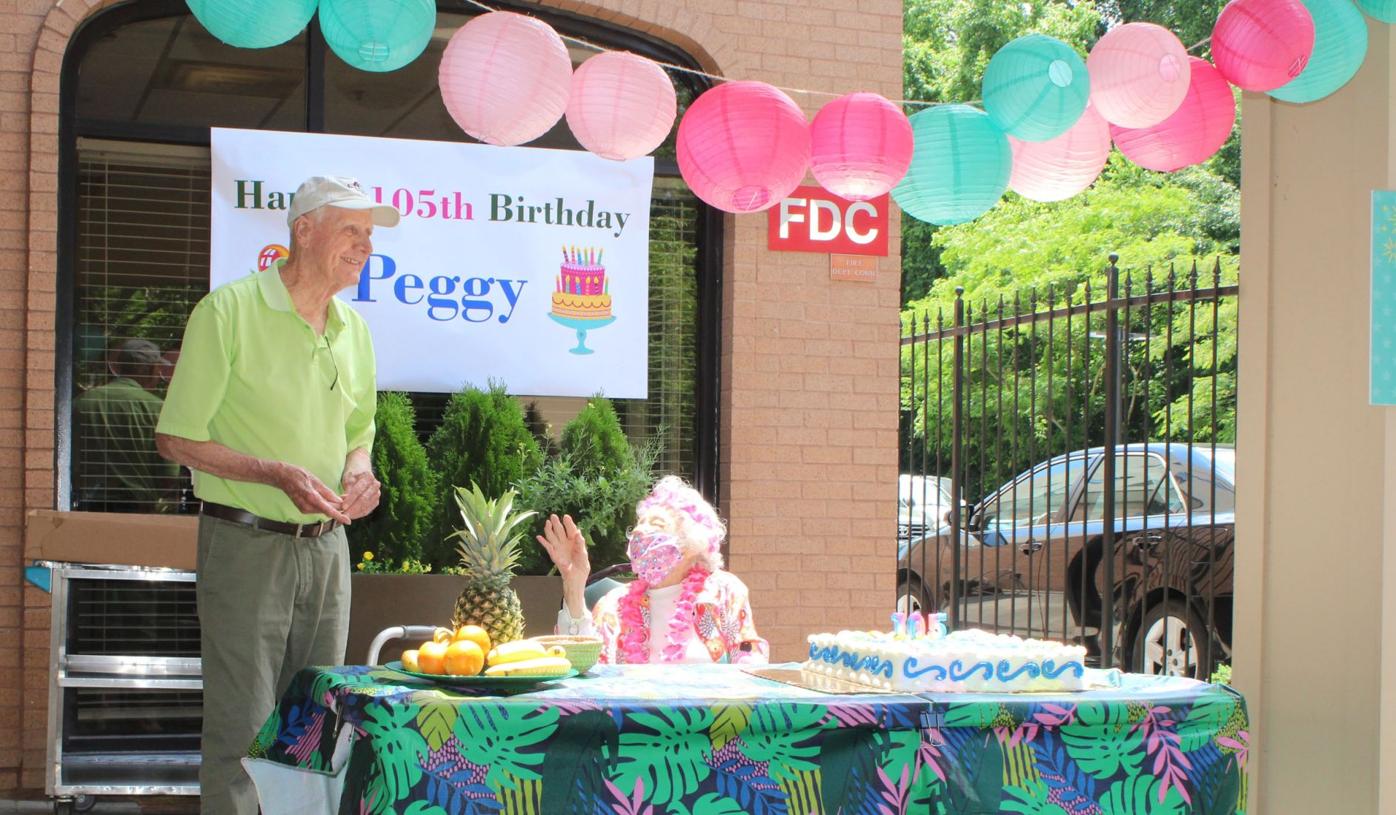 Peggy Cobb, seated, talks to fellow Hammond Glen Retirement Community resident Bill Kegerreis during her 105th birthday party May 22. Cobb is one of the few individuals in the world who have experienced both the COVID-19 pandemic and the Spanish flu outbreak of 1918-19. 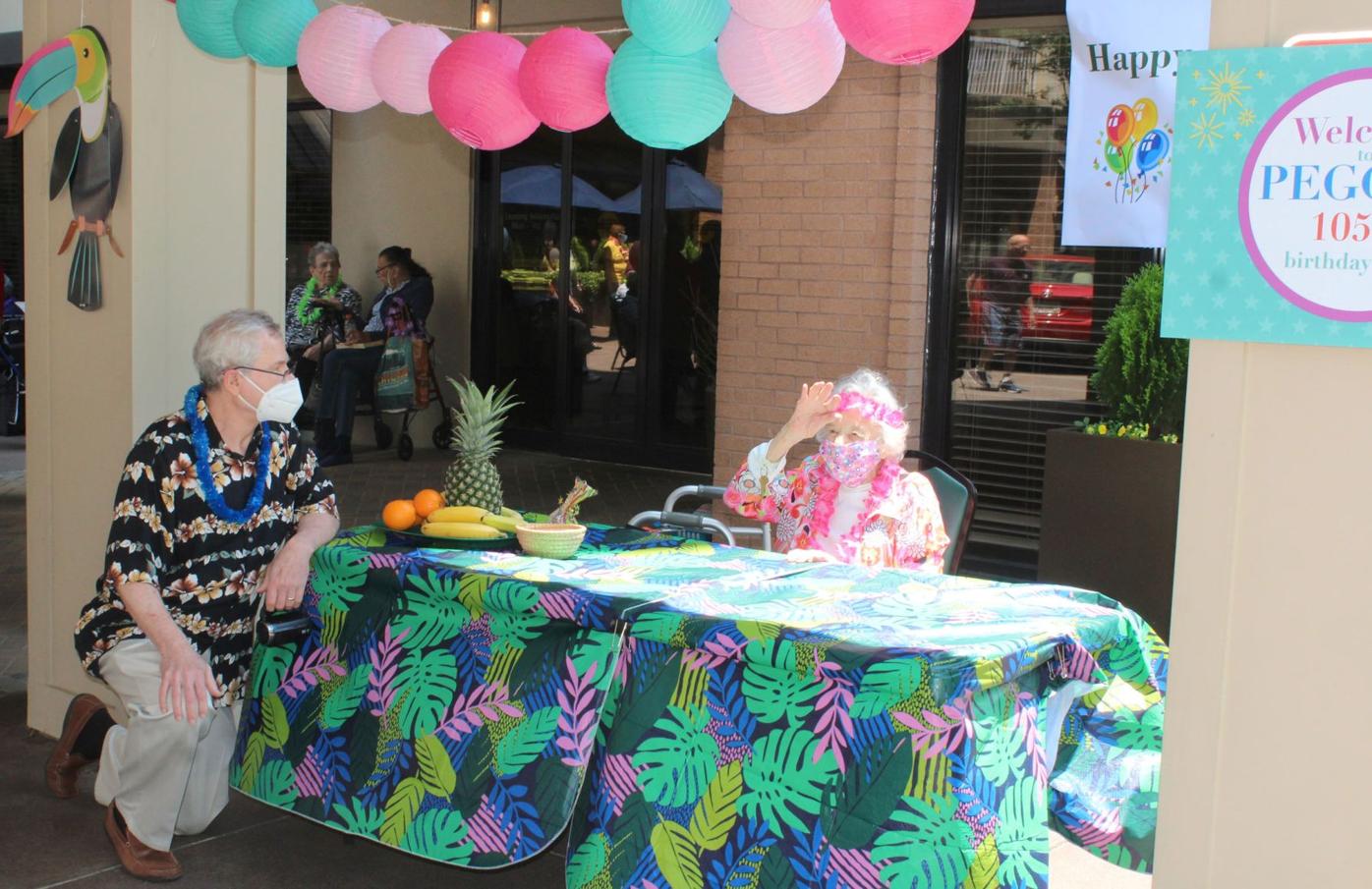 Peggy Cobb, seated, talks to her son Bill during her 105th birthday party at the Hammond Glen Retirement Community.

Peggy Cobb, seated, talks to fellow Hammond Glen Retirement Community resident Bill Kegerreis during her 105th birthday party May 22. Cobb is one of the few individuals in the world who have experienced both the COVID-19 pandemic and the Spanish flu outbreak of 1918-19.

Peggy Cobb, seated, talks to her son Bill during her 105th birthday party at the Hammond Glen Retirement Community.

This article was updated May 25 at 5:54 p.m. with additional information on the ages Peggy Cobb's siblings were when they died.

Peggy Cobb is one of the few individuals around the world who have experienced both the Spanish flu outbreak of 1918-19 and today’s COVID-19 pandemic.

The 105-year-old Sandy Springs resident was only a toddler during the earlier pandemic, but she has vivid memories of it.

“Everyone’s (homes) were in lockdown,” said Cobb, who grew up in southern Minnesota. “They called it quarantine back then. I remember … my dad (Frederick Vanstrom) was called a couple of blocks (away) to … help a friend whose wife had the Spanish flu, and she actually died. Dad was not allowed to come back to our house (temporarily), just like in here now. The (pandemics then and now) were an awful lot alike.

“I was too young to remember anything (else) except we were in quarantine. I grew up in a family where we were so secure that somehow nobody ever worried about … getting it.”

Cobb, who has not contracted either virus, talked about that experience and more in an interview with the Neighbor before her 105th birthday party May 22, one day before her birthday, at the Hammond Glen Retirement Community where she lives.

Regarding today’s outbreak, Hammond Glen, like some retirement homes, has not allowed visitors to come into the building to see residents such as friends or family members. But it has allowed its residents to go outside to see them. Cobb said living under those conditions has been a breeze.

“Oh, listen. It hasn’t been a bit difficult for me,” she said. “I am so interested in everything going on that, really, my life hasn’t changed. I keep busy with all unfinished projects. I don’t know what it would be like to be bored or anything, no. I’m a compulsive writer also.”

Cobb, a retired art teacher, lived in Terre Haute, Indiana, as an adult before moving to Hammond Glen in 2007. She and her husband, Jacob, were married for 59 years until his death in 2002, and she has lived through 18 U.S. presidents.

Her father owned a small bank that closed in 1929, when the Great Depression started, so the family began farming to make a living. Longevity runs in the family for Cobb, one of six siblings, including five girls. Three of her sisters lived to be 104, 100 and 94, and her fourth sister and brother both died of cancer at 84 and 70, respectively, her son Bill said, adding “it’s very cool” to see his mother turn 105.

“I wish I had her energy, her mind still being as sharp as it is,” he said. “I think it’s part of what’s made her last this long. She just has an intense curiosity about the world. She has a saying that’s on her refrigerator that says, ‘Learn something new every day.’ She’s also one of these people that, no matter what happens, she always finds a way to make lemonade out of lemons. Those two things together, plus genetics.”

Cobb has two sons, Bill and Pete, and two grandchildren. Her daughter, Katy, died in her 50s. Cobb said her positive attitude has helped her live over a century.

“When we were growing up, we revered nature, that sort of thing,” she said. “I guess curiosity is one of the big words. (Regarding) the lockdown here, I could cope with that just fine. … I just think one of the saddest things I’ve seen living in this place is when you know somebody who’s had an active mind and everything, and then you see the mind deteriorate. If it’s a physical thing taking it, they can’t do anything about it. I think a lot of the people, they lose interest in everything.”

Cobb also said everyone should “share your ideas,” one of many quotes or phrases she loves to cite.

“She loves sayings,” her son said. “Her refrigerator’s full of them, and the last one she would share with (others) is: ‘Stay flexible and you’ll never get bent out of shape.’ And one she got from her parents, that was, ‘Furnish your mind well and you always have a comfortable place to live.’ Those are two of her favorites.”

Countless metro Atlantans continue to help others in need during the coronavirus (COVID-19) pandemic.

With the COVID-19 pandemic still causing facilities to adhere to health and safety restrictions, the Hammond Glen Retirement Community in Sand…

Sabrina Hatchett, dining room coordinator at the Hammond Glen Retirement Community in Sandy Springs, was feted with a drive-by parade at her r…