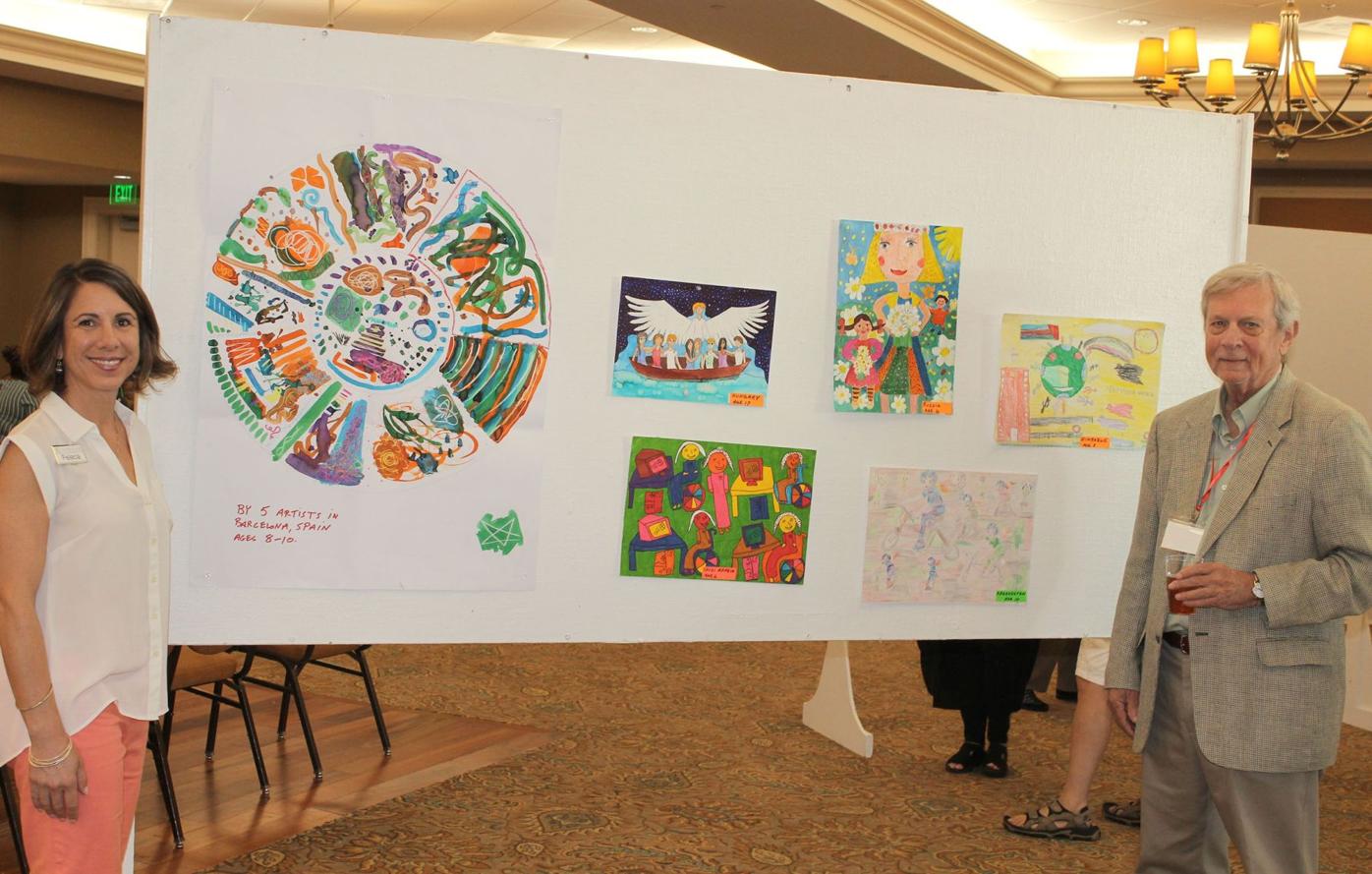 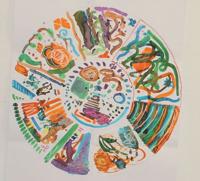 From left, Felecia Sveda, Lenbrook’s vice president for hospitality services, and International Paint Pals founder and Managing Partner Linden Longino, who both helped organize the 2019 Children’s Art Festival, stand by one of the partitions displaying artworks at the event. 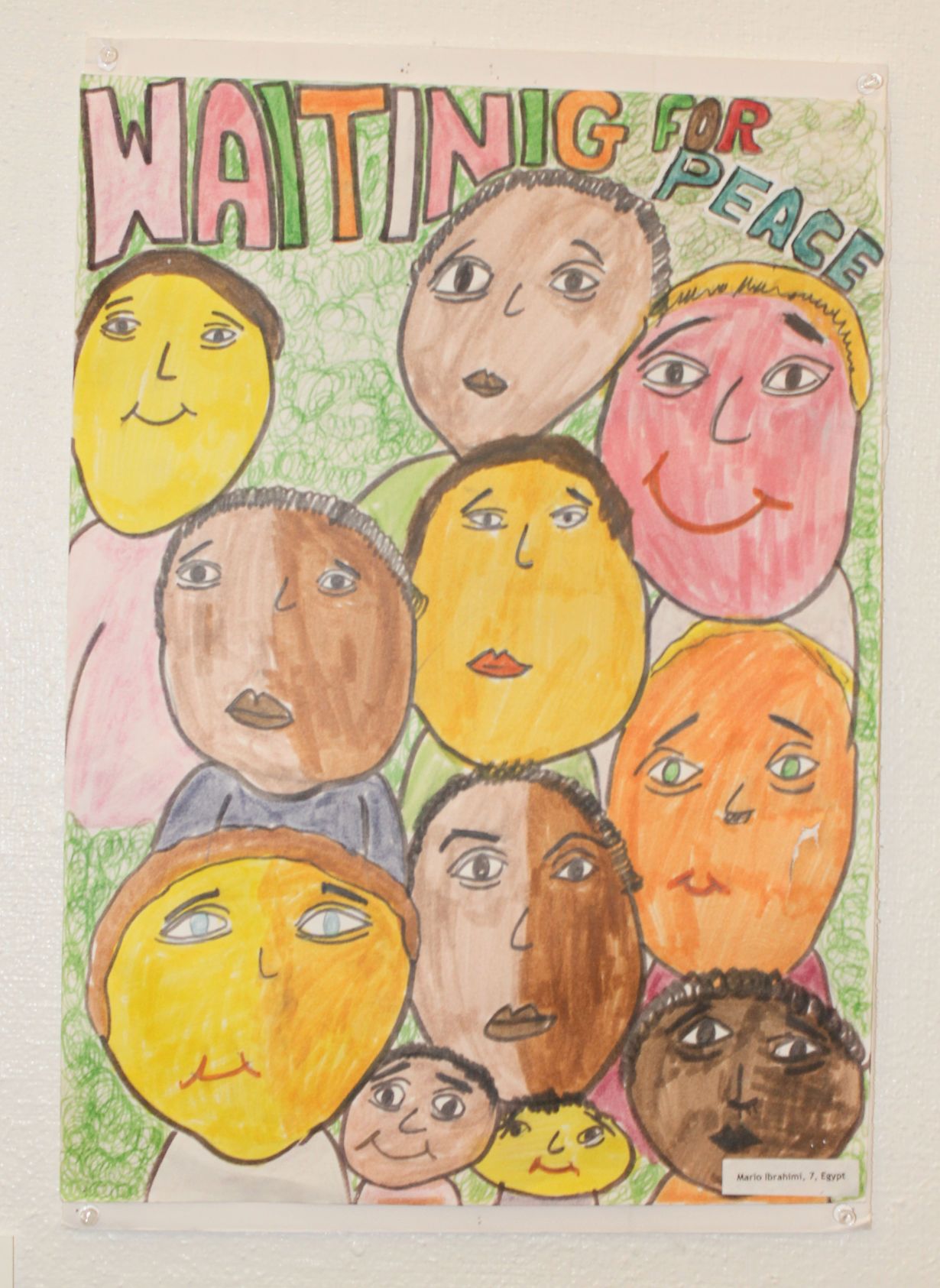 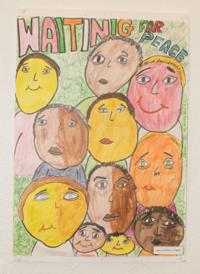 A drawing by a child from Egypt was one of the art pieces on display at the 2019 Children’s Art Festival. 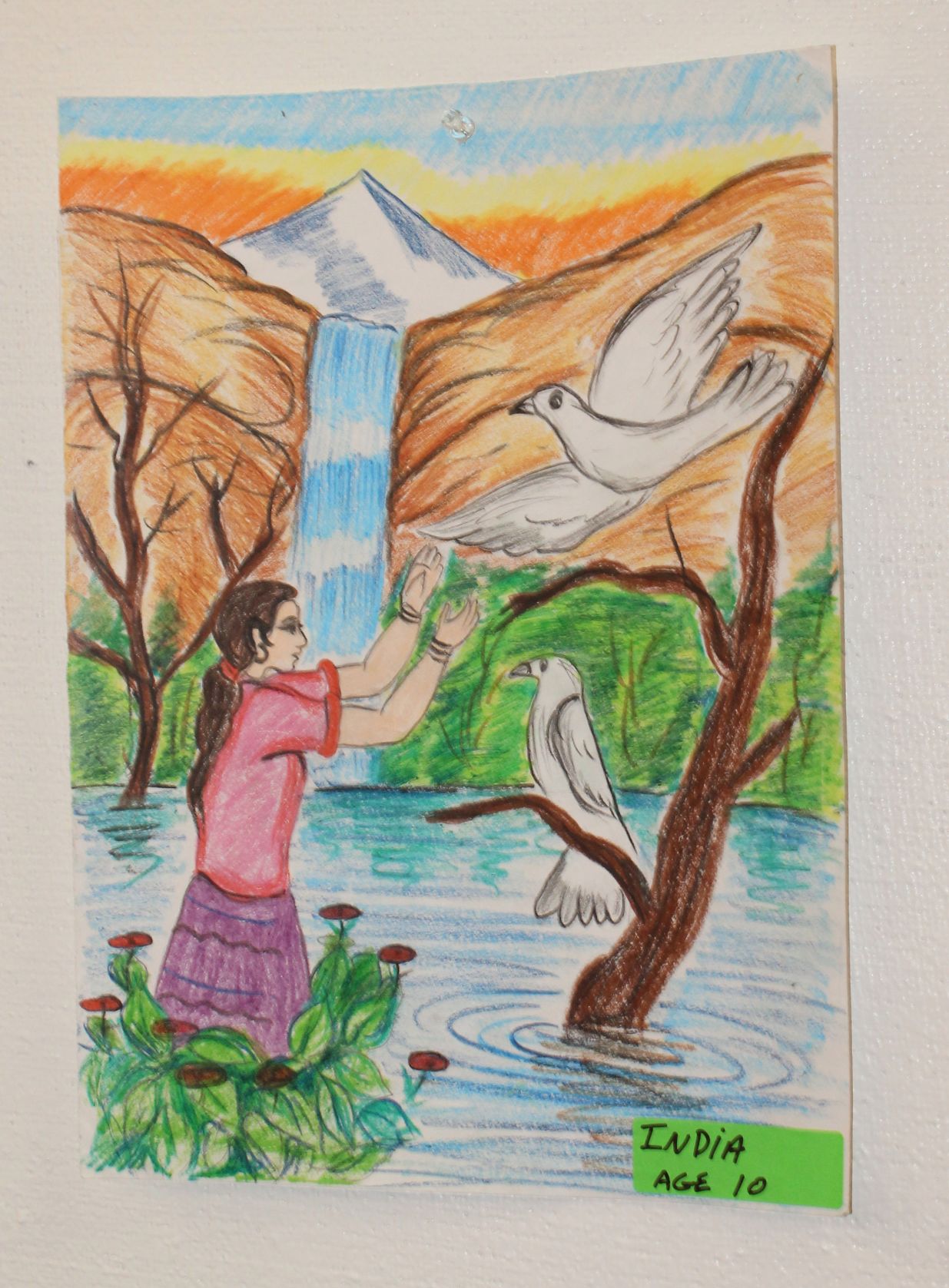 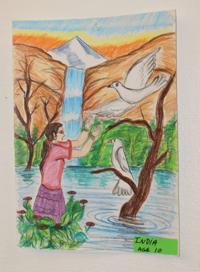 A drawing by a child from India was one of the art pieces on display at the 2019 Children’s Art Festival.

From left, Felecia Sveda, Lenbrook’s vice president for hospitality services, and International Paint Pals founder and Managing Partner Linden Longino, who both helped organize the 2019 Children’s Art Festival, stand by one of the partitions displaying artworks at the event.

A drawing by a child from Egypt was one of the art pieces on display at the 2019 Children’s Art Festival.

A drawing by a child from India was one of the art pieces on display at the 2019 Children’s Art Festival.

“I haven’t even unpacked (all of them),” said Peragine, a professor of drawing, painting and printmaking at the college and director of its Ernest G. Welch School of Art and Design. “There are seven or eight boxes. I have only opened one. I feel like it’s Christmas morning. I’m getting ready to open them up and see what we have. Maybe it will inspire us to do other things I haven’t even thought of yet.”

International Paint Pals is an organization that uses children’s art to promote peace, friendship and human rights worldwide. Since its founding in 1995, it has exhibited more than 200,000 kids have painted pictures to be used in programs and exhibitions sponsored by the United Nations, the Olympics and others.

Over the years some of the paintings used in those exhibitions were sent back to their home countries or sold for $50 to $100 each, with all the funds going back to children’s charities in the countries that produced it, said Linden Longino, International Paint Pals’ founder and managing partner. The 1,200 pieces, which are from kids in 98 countries, represent a small portion of the artwork displayed at those exhibits and are “the best of the best,” he added.

The pieces were housed at the Carter Presidential Library & Museum and were to be used for the nonprofit’s 25th Anniversary Celebration Exhibition, since it was founded following Longino’s work with The Atlanta Project of The Carter Center next door. But it was delayed due to the COVID-19 pandemic.

Once the outbreak ends, the artwork will be loaned to the library for the exhibition before returning to Georgia State.

Longino said he decided to donate the pieces to Georgia State after talking to Melody Milbrandt, a retired art professor there who taught future art teachers. When she was still teaching, she would request for some of her former students who had become art teachers to ask their students to paint pictures so they could be used in his organization’s exhibits.

“Although it’s an international program, it has involved a lot of Atlanta kids and kids around the U.S.,” Longino said.

“I feel like the project is far reaching and very impactful to many people around the artwork,” he said. “To have it at Georgia State as a teaching tool (is important). Hopefully it will inspire people to do similar projects or just act on some of the ideas that are in the work.

“These young artists are making some profound statements about what peace means to them. Obviously (Americans) have a different perspective on what peace might look like compared to what someone in the Middle East thinks it might look like.”

Peragine said once the Carter Library exhibition ends, the pieces will be used in different ways.

“There’s too many of the pieces to ever show them all together at GSU, but we’ll archive them at the school and make them available to students in the art education program,” he said. “We’ll also frame a number of them and put them up in the dean’s office and in our school as well.”

“I’m just delighted that Georgia State accepted the donation and planned to use it in such a way that it continues to fulfill the mission of Paint Pals, which is kids learning about world topics and then expressing themselves through art,” he said.

The Alliance Theatre is wading in uncharted waters with its latest production.

Hearings to start Monday on retrial of Timothy Tyrone Foster, charged with killing a retired Rome schoolteacher in 1986

New arrivals for the Wednesday, Jan. 27, 2021 edition of the Standard Journal