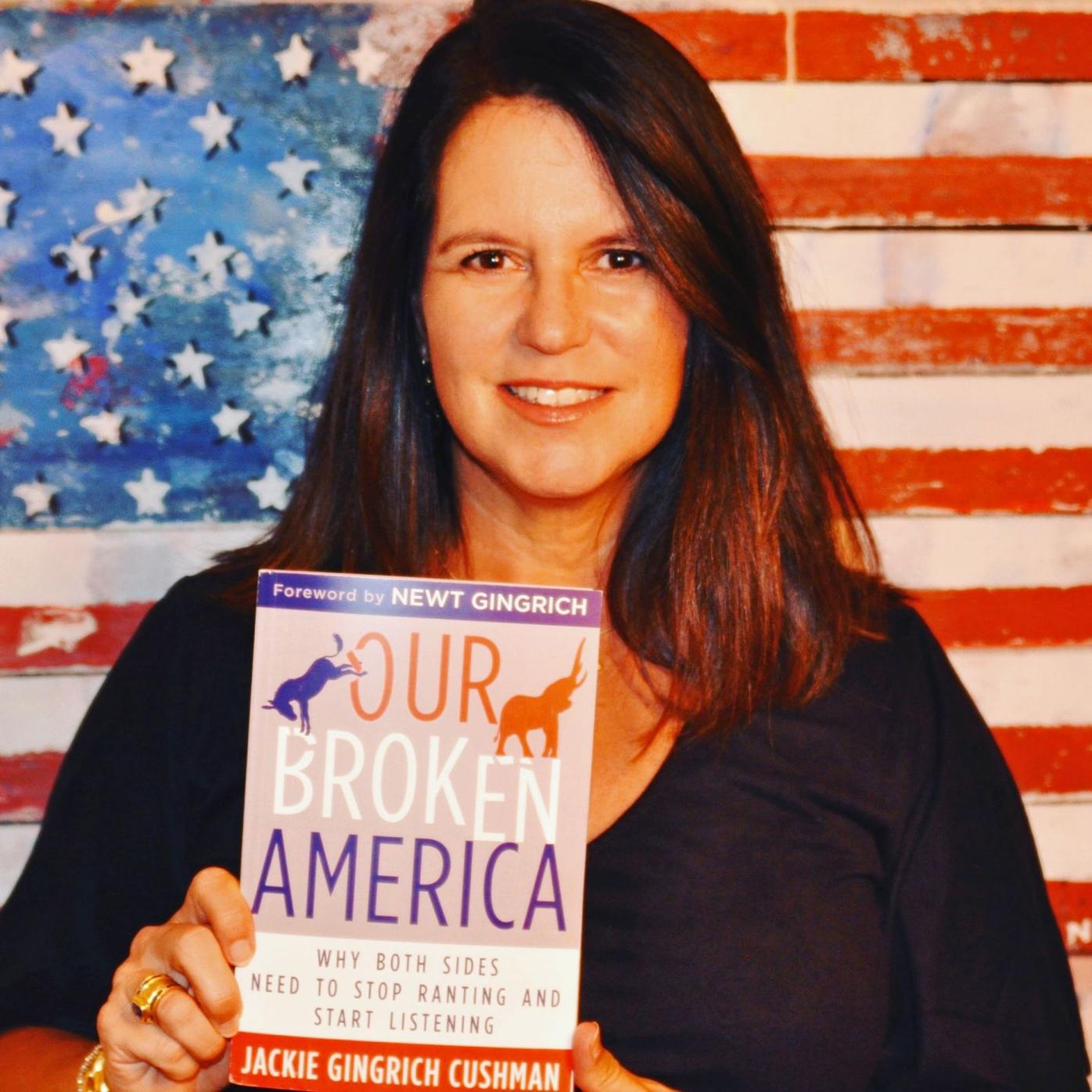 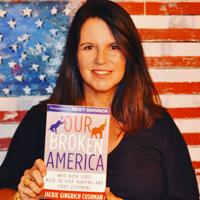 Jackie Gingrich Cushman holds a copy of her latest book, “Our Broken America: Why Both Sides Need to Stop Ranting and Start Listening.” 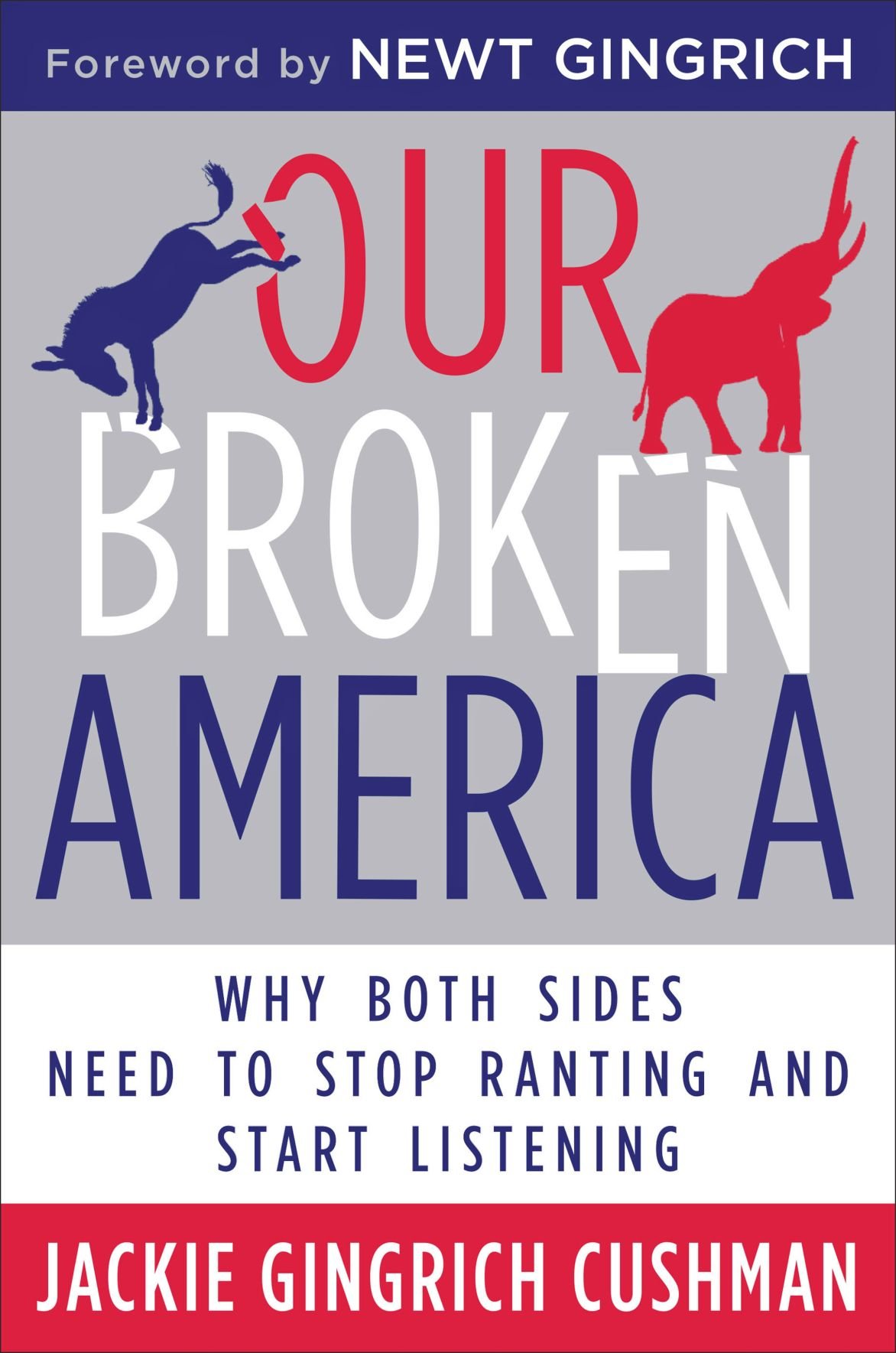 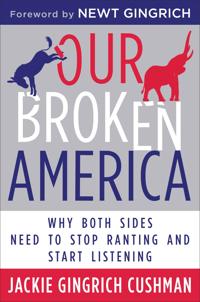 Jackie Gingrich Cushman’s latest book, “Our Broken America: Why Both Sides Need to Stop Ranting and Start Listening,” examines why the nation has become politically polarized.

Jackie Gingrich Cushman holds a copy of her latest book, “Our Broken America: Why Both Sides Need to Stop Ranting and Start Listening.”

Jackie Gingrich Cushman’s latest book, “Our Broken America: Why Both Sides Need to Stop Ranting and Start Listening,” examines why the nation has become politically polarized.

Jackie Gingrich Cushman came up with the idea for her latest book while looking at how politically divided this nation has become.

The end result for the Buckhead resident is “Our Broken America: Why Both Sides Need to Stop Ranting and Start Listening,” which was released Sept. 17.

Cushman, who also works as a public speaker and author, has written three other books, including one with her father, former U.S. House Speaker Newt Gingrich. Cushman, who said it took her about six months to write her latest book, listed the reasons why America has become so polarized.

“One is if you look at the change in technology, the faster communication, as well as the use of social media, (things) have definitely changed,” she said.”Secondarily, both (the Democratic and Republican) parties, we used to have a lot of overlap in the middle with other parties from an ideology standpoint. Now both parties have shifted to each side, so there’s very little overlap in ideology.

“The other thing that’s happened is people still believe in God and believe God can help the country, but they’re less likely to belong to a religion.”

In her research Cushman discovered some interesting statistics.

“When we ask people what drives them, conservatives will often say God and religion, but Democrats will say political and social causes,” she said. “One of the main reasons, which is most interesting, is that 55% of Republicans and 65% of Democrats have few or no friends in the other party. So, think about it. If you’re born in New York and you’re a Democrat and watch MSNBC, (you likely) have no Republican friends. If you’re born in Alabama and watch Fox News, (you likely) have no Democrat friends.

“That’s our major problem. We don’t work together to accomplish things in small communities. The reality is the only way to solve this is to work in communities (in a) friendly (way). Maybe you don’t agree on everything, but maybe you can find one thing you agree with them on and work on that one thing to make progress.”

The book, which costs $28, is available in bookstores and online booksellers, including www.amazon.com and www.barnesandnoble.com. It was published by Center Street, an imprint of New York-based Hachette Book Group.

Kate Hartson, Center Street’s editorial director, said “Our Broken America” is the first book by Cushman it has published.

“Jackie came to us with a proposal for this important book at a critical time in our country – I could not resist publishing it,” Hartson said. “In ‘Our Broken America,’ Jackie discusses the reasons why we are divided as a country and provides thoughtful analysis of the current divide along with ideas on how we can learn to communicate better with those who disagree with us.

“Open dialogue is one of the things that has made this country great – and Jackie wants us to reach deep and communicate with open minds and hearts.”

Cushman said despite the nation’s divisiveness, bridges still can be mended.

“The main thing is people are very concerned about where we are in the country, but I think our future us bright,” she said. “But we have to work together. When we disagree, we need to spend more time together. Let’s disagree agreeably. … I think we need to talk about it civilly.”

For more information on the book or a link to the online booksellers where it’s sold, visit https://bit.ly/2k9Mk9L.

Isakson shares highs and lows of 45 years in politics

EDITOR’S NOTE — On the day after announcing his retirement from the U.S. Senate, Georgia Republican Johnny Isakson sat down with the Marietta …

Eleven metro Atlanta authors, including nine from Buckhead and Sandy Springs, will appear at the 28th annual Book Festival of the MJCCA (Marcu…