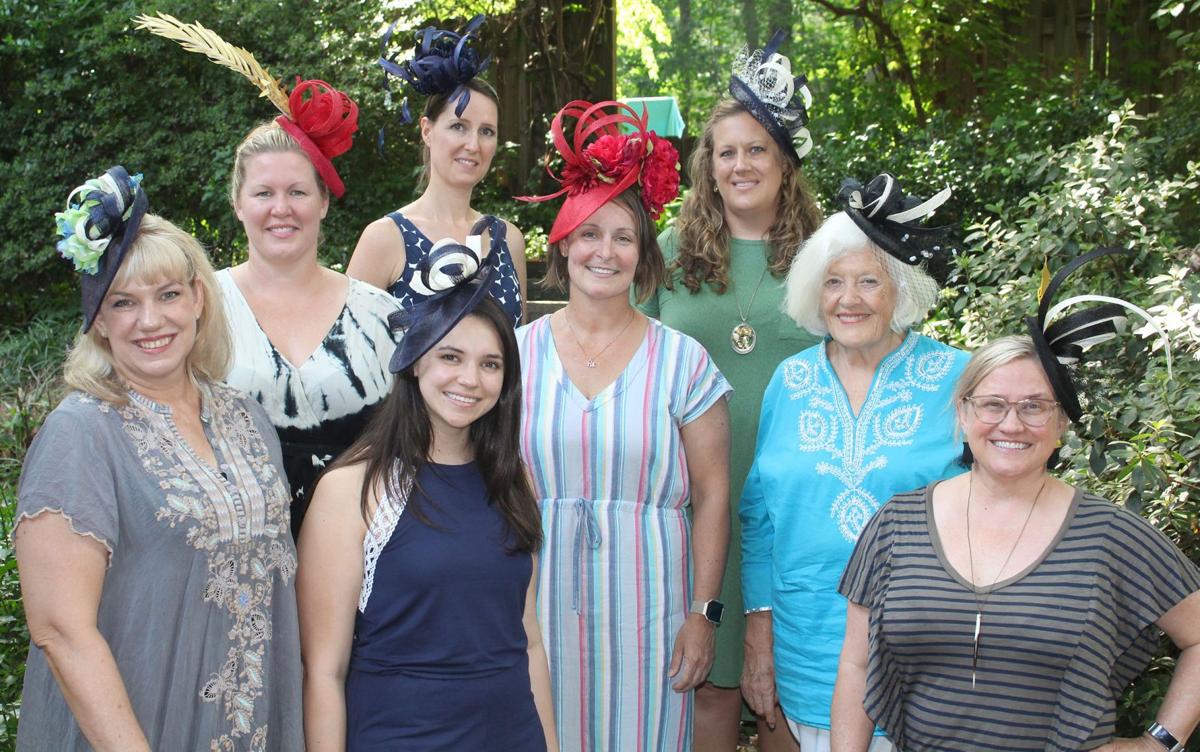 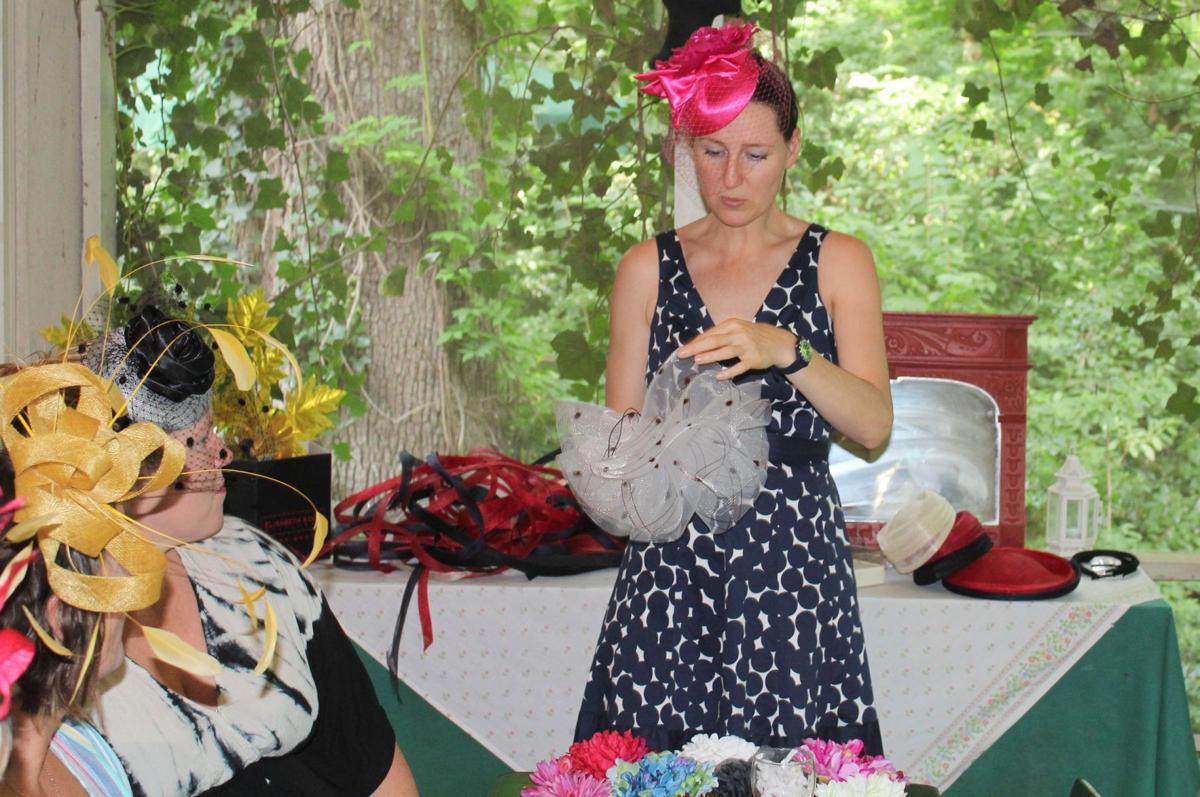 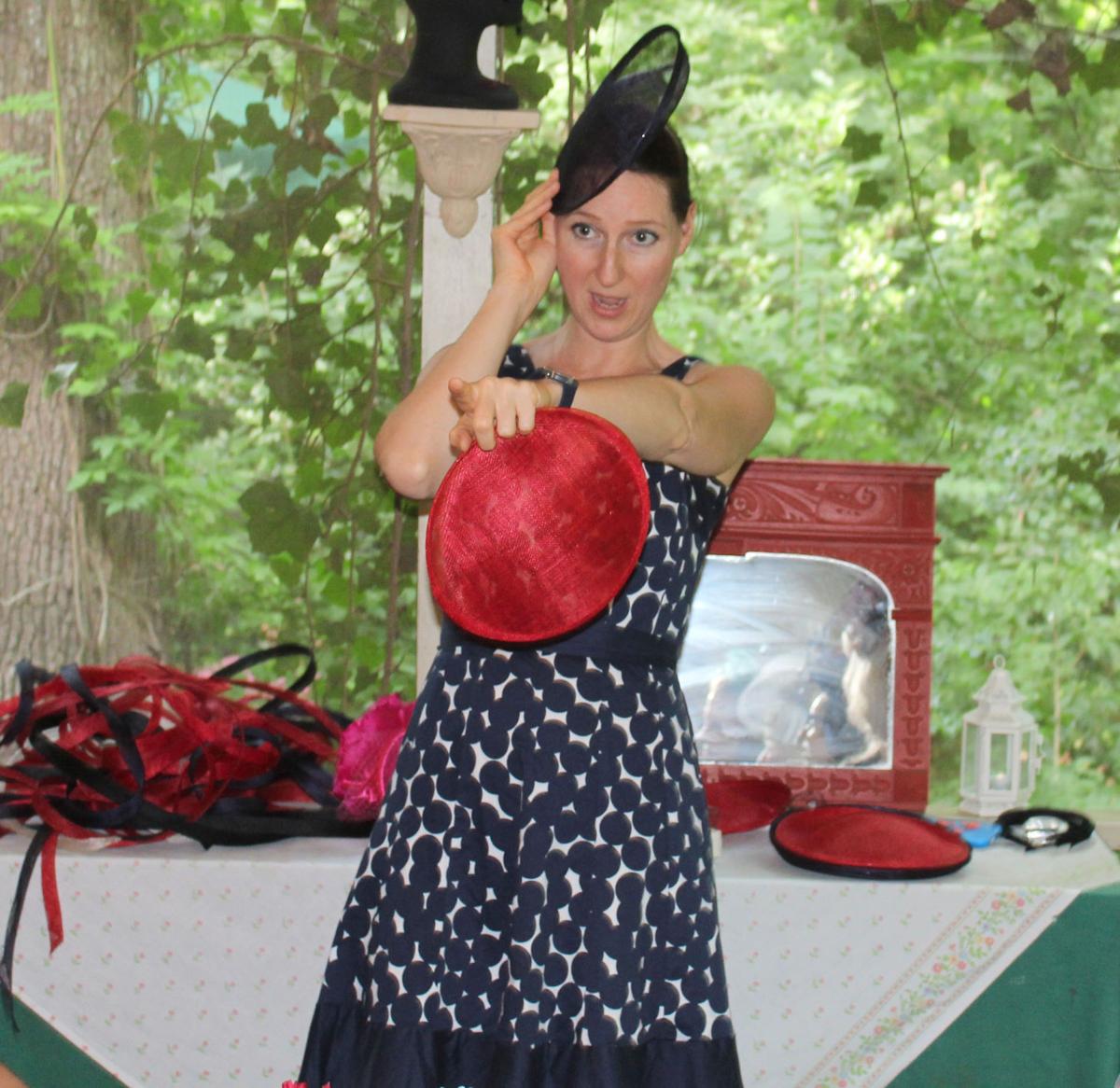 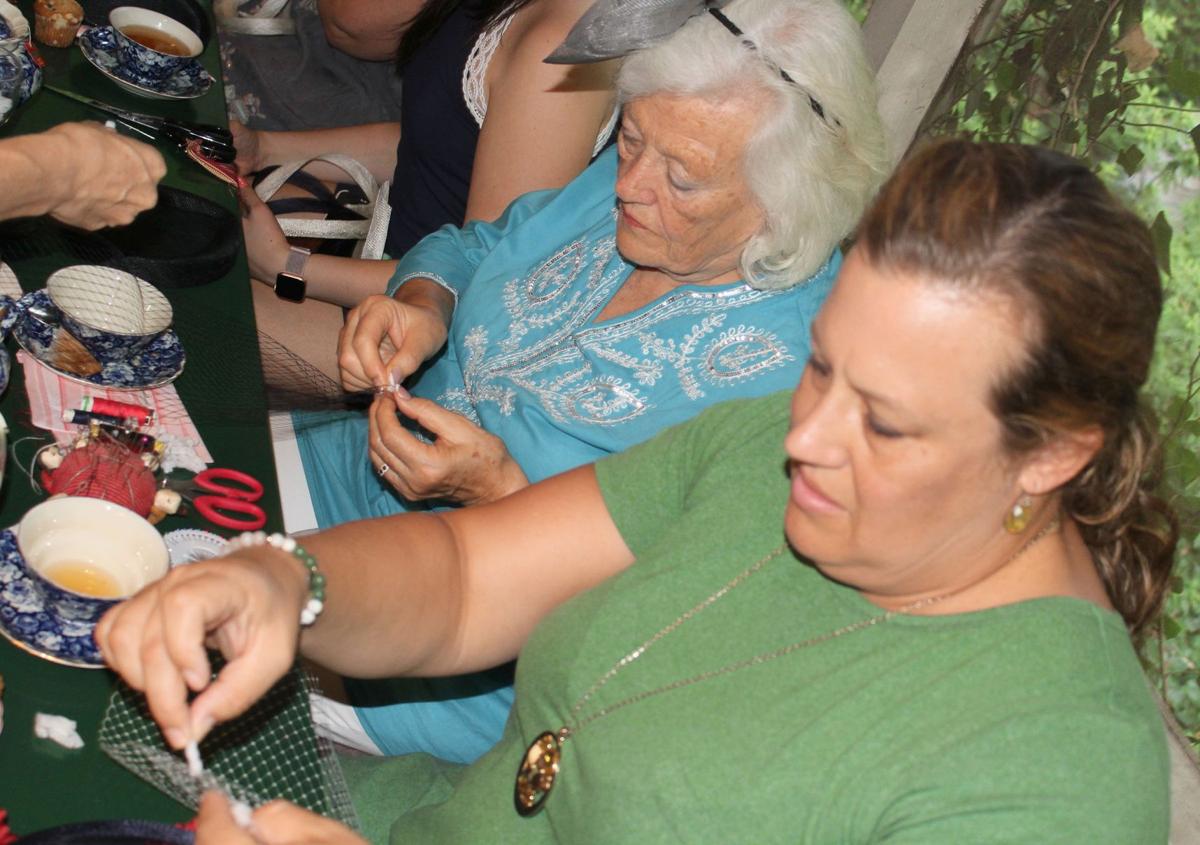 Kim Friese, front, and her mother, Hilde Friese, put snowflakes, made with pieces of pipe cleaners, on their hats’ veils during the workshop. 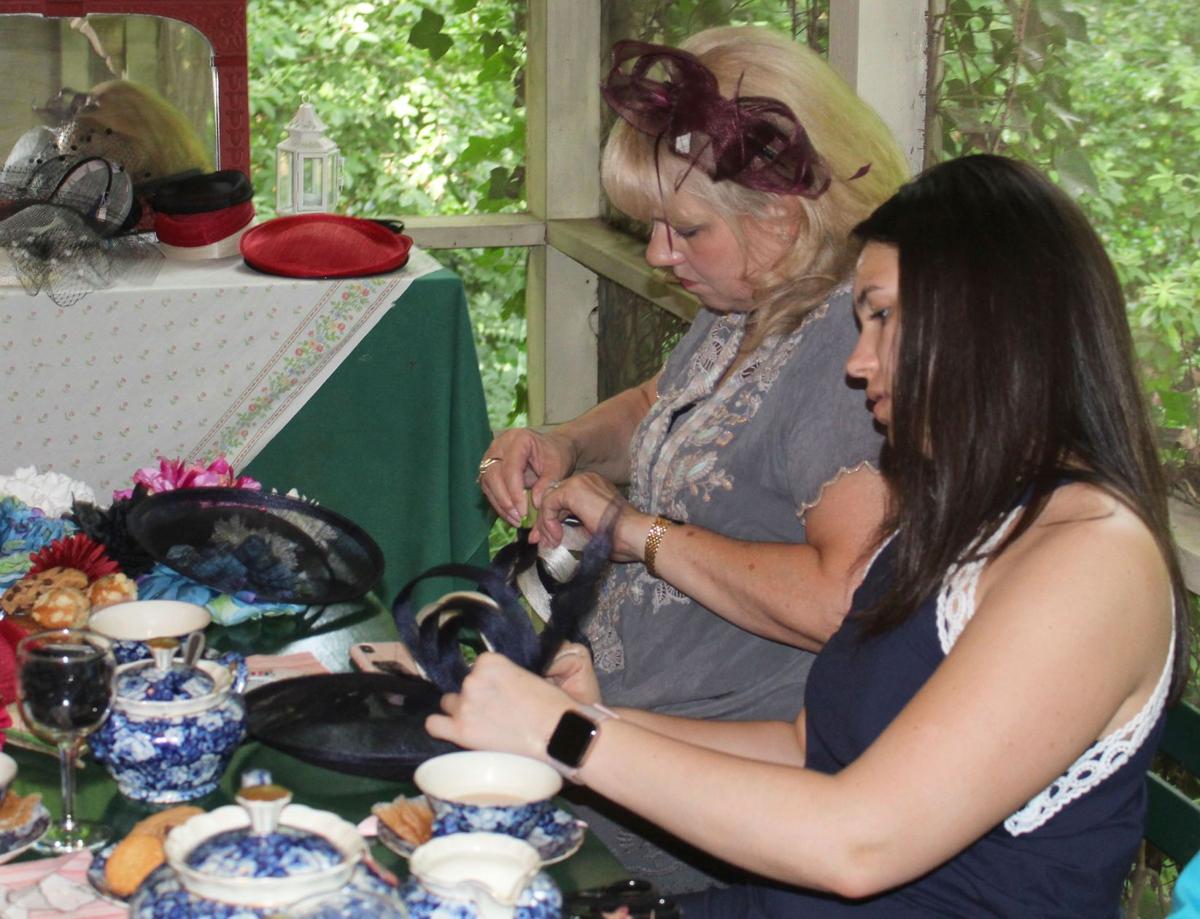 Gaby Guerra, front, and her mother, Debbie Guerra, put bias strips on their hats during the workshop. 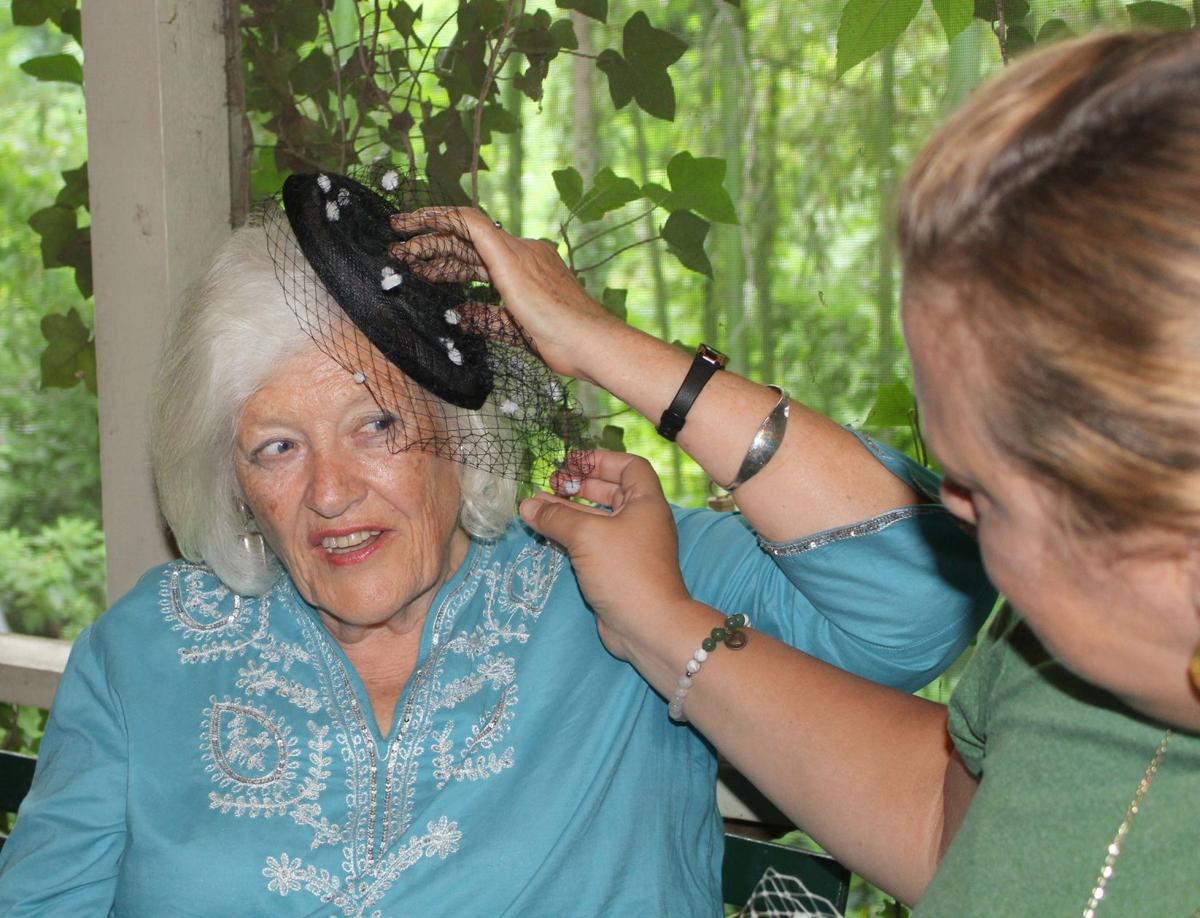 From left, Hilde Friese asks her daughter, Kim Friese, if her hat is in the right spot on her head during the workshop. 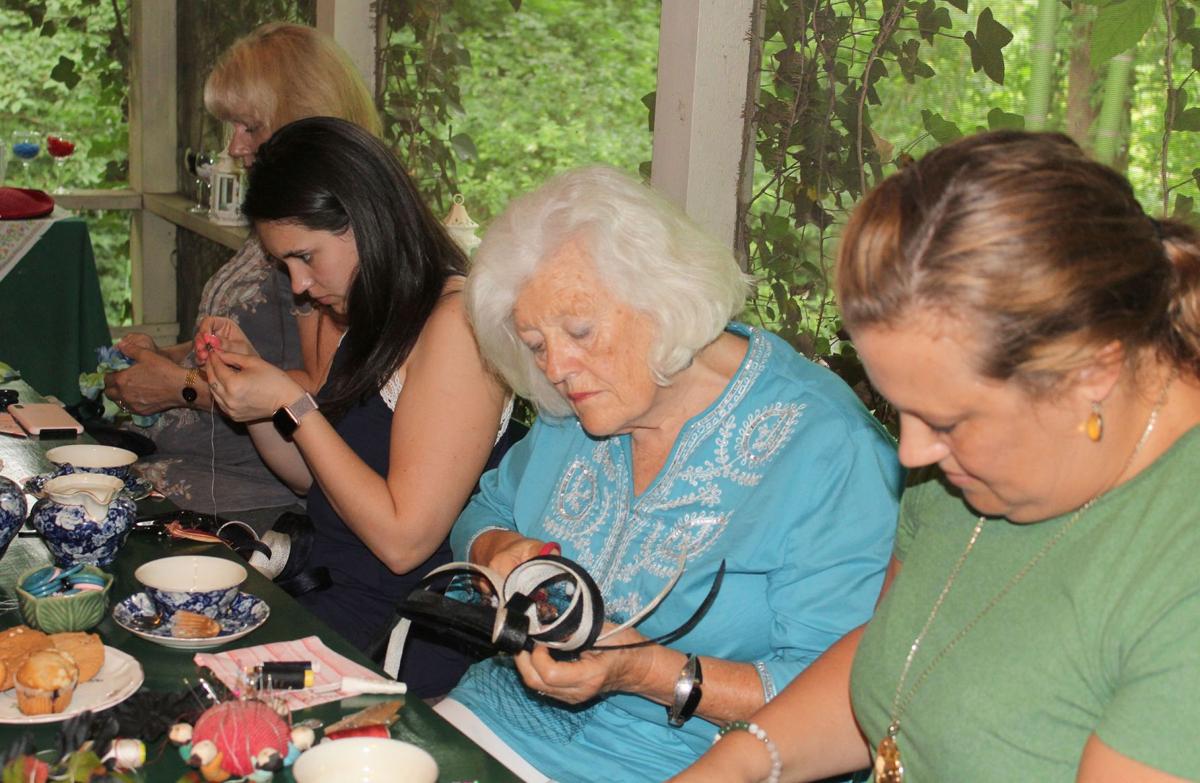 From left, Debbie Guerra, Gaby Guerra, Hilde Friese and Kim Friese put bias strips on their hats during the workshop. 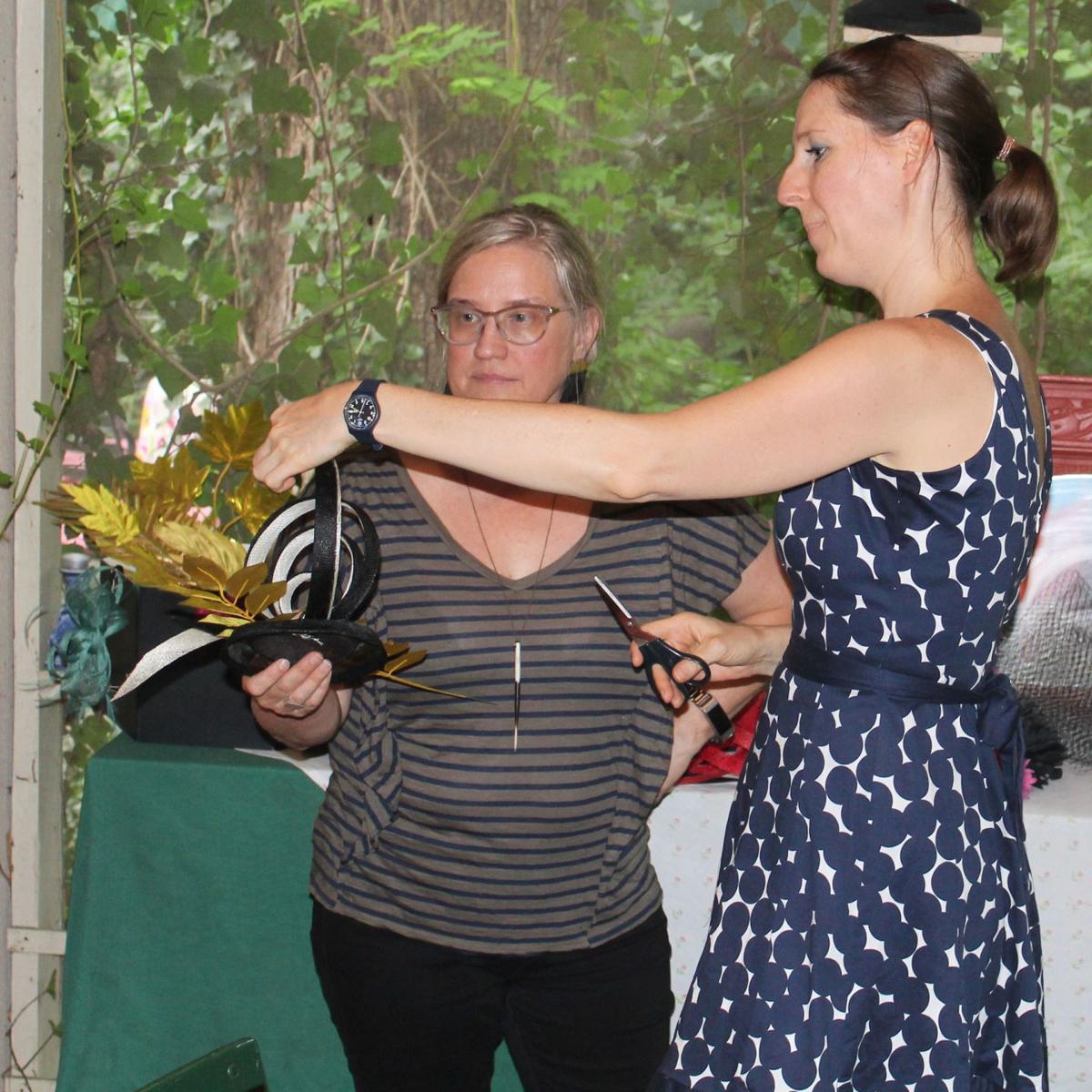 Elisabeth Koch, right, works with Brigette Flood on putting the final touches on Flood’s hat during the workshop.

Kim Friese, front, and her mother, Hilde Friese, put snowflakes, made with pieces of pipe cleaners, on their hats’ veils during the workshop.

Gaby Guerra, front, and her mother, Debbie Guerra, put bias strips on their hats during the workshop.

From left, Hilde Friese asks her daughter, Kim Friese, if her hat is in the right spot on her head during the workshop.

From left, Debbie Guerra, Gaby Guerra, Hilde Friese and Kim Friese put bias strips on their hats during the workshop.

Elisabeth Koch, right, works with Brigette Flood on putting the final touches on Flood’s hat during the workshop.

This article was updated July 29 at 9:58 p.m. with corrected information on the amount of time it takes Elisabeth Koch to make one custom hat.

Elisabeth Koch was raised in Sandy Springs as the daughter of creative parents, and that inventiveness rubbed off on her.

“We grew up very much with the sense of if it’s broken, fix it. Don’t throw it away and buy a new one,” she said. “… My Barbies, I made them houses. I made them beds. I made them clothes. So we were always making things. My mom made my sister and (me) matching smock dresses. …

“Over time, I loved making things. I had an old T-shirt where I would add a piece to it, and it’s a dress. Dad had a beautiful Italian silk tie that was stained. (I said), ‘Don’t throw it away, Dad. I can cut it up and make something out of it.’ I made a skirt out of a broken umbrella.”

But when she went to college, Koch took a more traditional route, getting bachelor’s and master’s degrees in communication studies and then working in the financial and banking industry in Amsterdam, Holland, and Brussels, Belgium.

However, when her husband Albert was working for the Dutch foreign ministry and was about to be assigned to a post in Beijing, Koch decided to follow her dream and become a milliner, or hat maker. Shortly before they moved to China, she took a course at the Wombourne School of Millinery in England to learn the craft.

“(Growing up), I loved hats,” Koch said. “I had a huge collection of vintage hats. I wore them to weddings, any chance I got. There’s a point where I like making things and then decided I want to make hats. I wanted to make something with my hands.”

Since starting her company, Elisabeth Koch Millinery, in 2007, her business has taken off. She has done countless presentations on hat making to groups and organizations ranging from the Boy Scouts of America to the Atlanta Decorative Arts Center in Buckhead. She’s even given two TED (Technology, Entertainment and Design) Talks and has had her hats featured on the cover of Vogue China.

But in China, a country of nearly 1.4 billion individuals, Koch is the only milliner she knows of, which means finding materials for her hats can be a challenge.

“In China I’m stuck to what I have in my studio. The problem in China is I can’t go to Michael’s or Hobby Lobby and buy it there,” she said, adding she orders materials from Holland, the United Kingdom and the United States. “… A client will come to my studio and we will look at the materials I have, the colors I have and make things from that. It really makes you think outside the box because you don’t have everything available that you need.”

For the past six years Koch has taught hat-making workshops, both at her parents’ home in Sandy Springs and in the Netherlands, where she instructs women on making fascinators, which are special hats worn at weddings, tea parties and other social functions such as horse races. The Neighbor attended her most recent local one July 28.

Sandy Springs resident Kim Friese, who took the workshop with her mother Hilde, who lives in Stone Mountain, said it was “something fun to do with my mom.”

“I thought this was so great,” she said. “It’s a skill that I think is lost on current society, so this is something fun to do and to really learn about it and not just be told step one, step two, step three and to really be able to be creative, which is not something I get to do every day at work.”

Her mother added, “I think it’s great. It’s really fun. It gave me more respect for what milliners do, many different parts going into it, the knowledge with it. It’s amazing she can pull this off in Beijing. It’s just great.”

Another mother-daughter duo, Sandy Springs residents Debbie and Gaby Guerra, also said they took the workshop to do something fun together. Gaby Guerra said they learned about it because her brother has taken art lessons from Koch’s mother Disja.

“I had a (Kentucky) Derby party earlier in the year, which I was ridiculously underprepared for. So at least I have something (to wear) now,” she said. “I loved it. I thought it was so much fun, especially not knowing how to do so much of it and kind of coming up with the creative aspects of it.”

Her mother added, “I thought it was fun. There was a variety of ideas and good suggestions, materials to work with. And then to see the inspiration of the hats already made was great.”

Koch’s hats start at $70 for her line’s Blue label and at about $400 for her Pink label. She said it takes three days to weeks to make one custom hat, depending on what the client asks for, adding the hat that took the longest to create was for a one customer who wanted Swarovski crystals embedded into it.

The workshops cost $85 per person and $150 for two (cash only) and include all materials for making a hat, which the participant can take home. The last two in Atlanta this year will take place Aug. 10 and 11 from 2 to 4:30 p.m.

A Buckhead poet has published her fifth chapbook

Robert Frost, one of America’s most revered 20th-century poets, had a unique perspective on this written art form.

Piedmont Park Arts Festival is back with expanded amenities

If there’s one word to describe the 2019 Piedmont Park Arts Festival, it’s “bigger.”

Through Sept. 29, Gallery 4945, 4945 High Point Road in Sandy Springs, will host an exhibition of art by Lila McAlpin, who specializes in pain…

Through Sept. 14, the Alan Avery Art Company will host “Found Through Fragmentation,” an exhibition featuring the work of Darien A-Johnson.