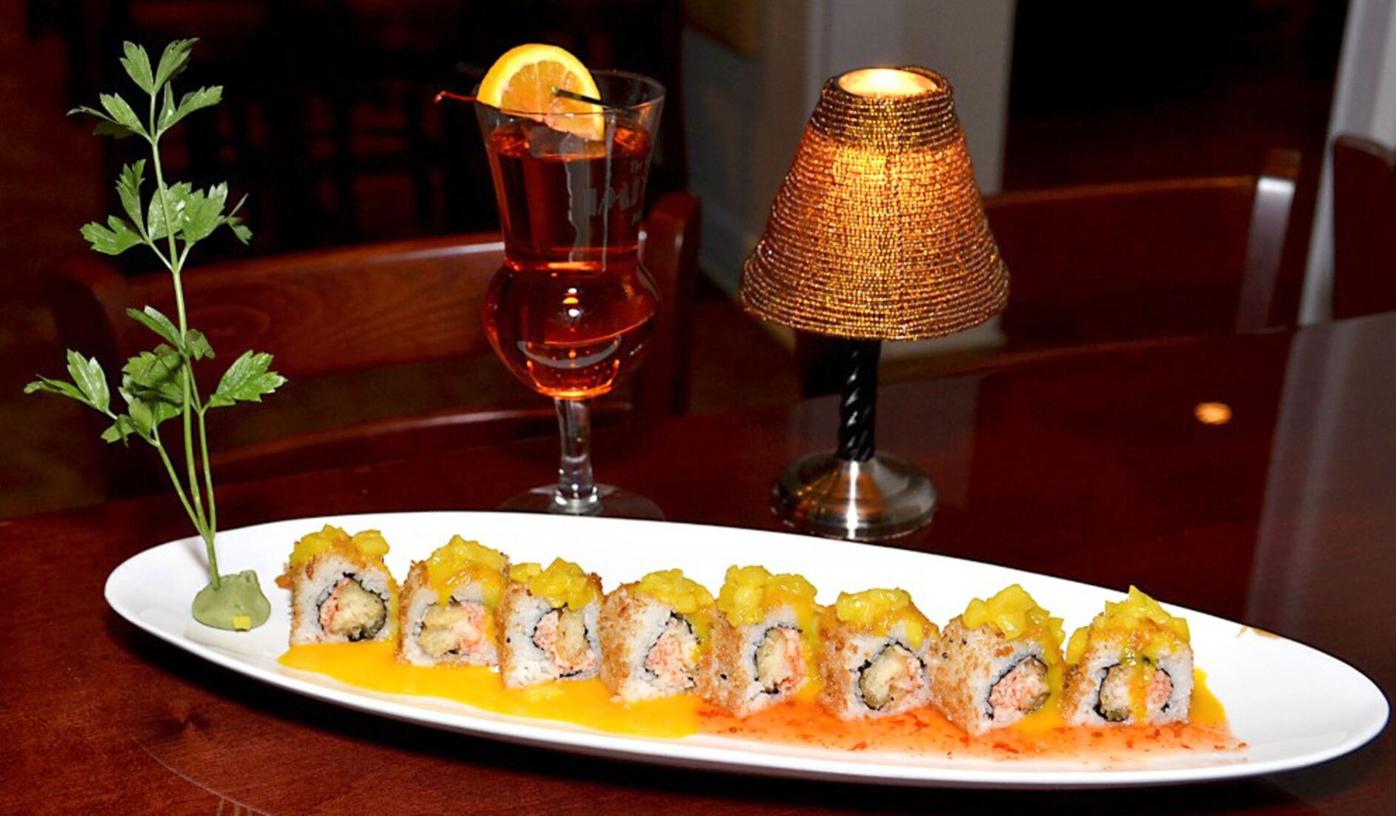 Pictured are a sushi roll and a craft cocktail from Saito – Sushi, Steak and Cocktails in downtown Atlanta. 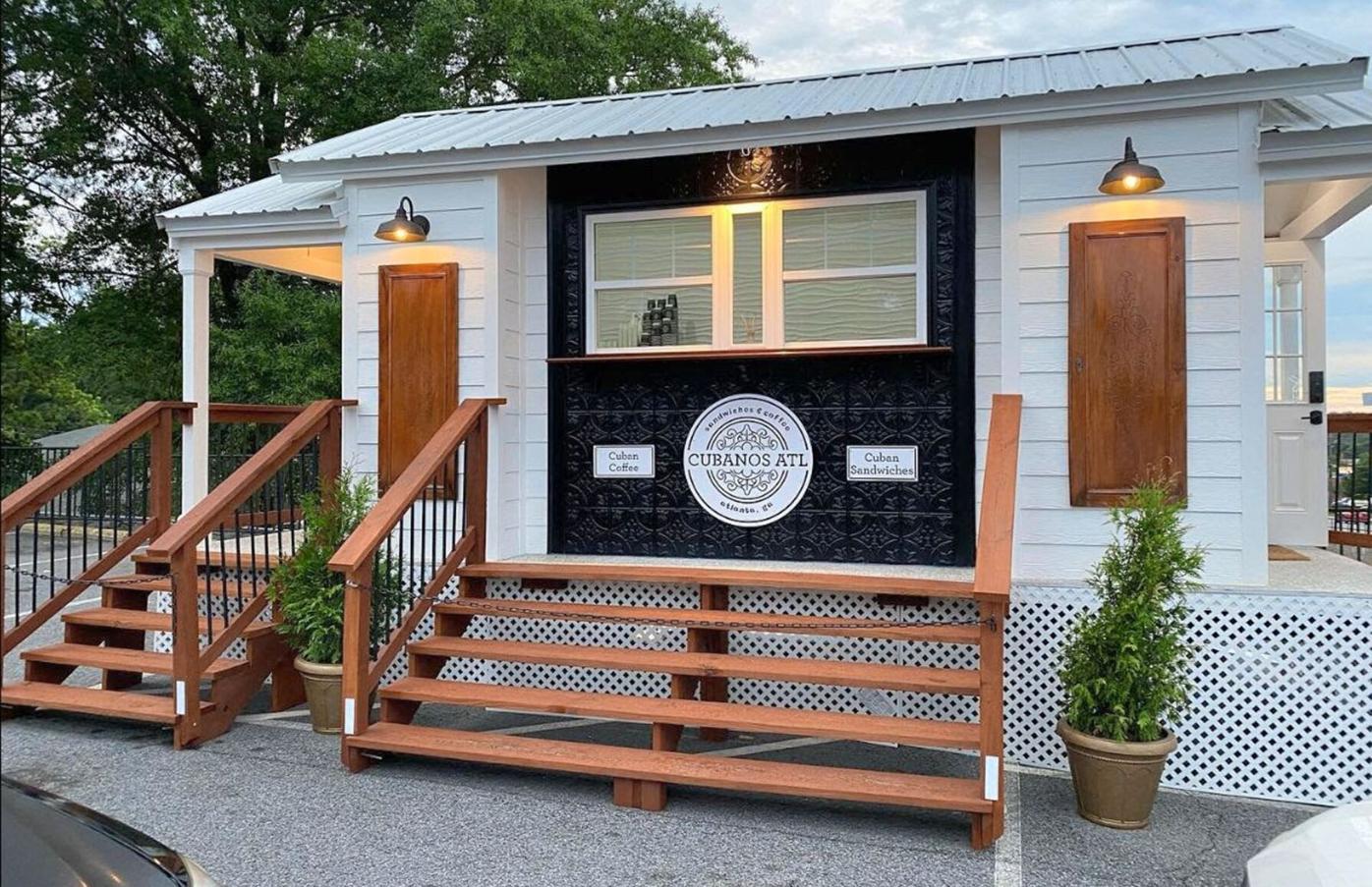 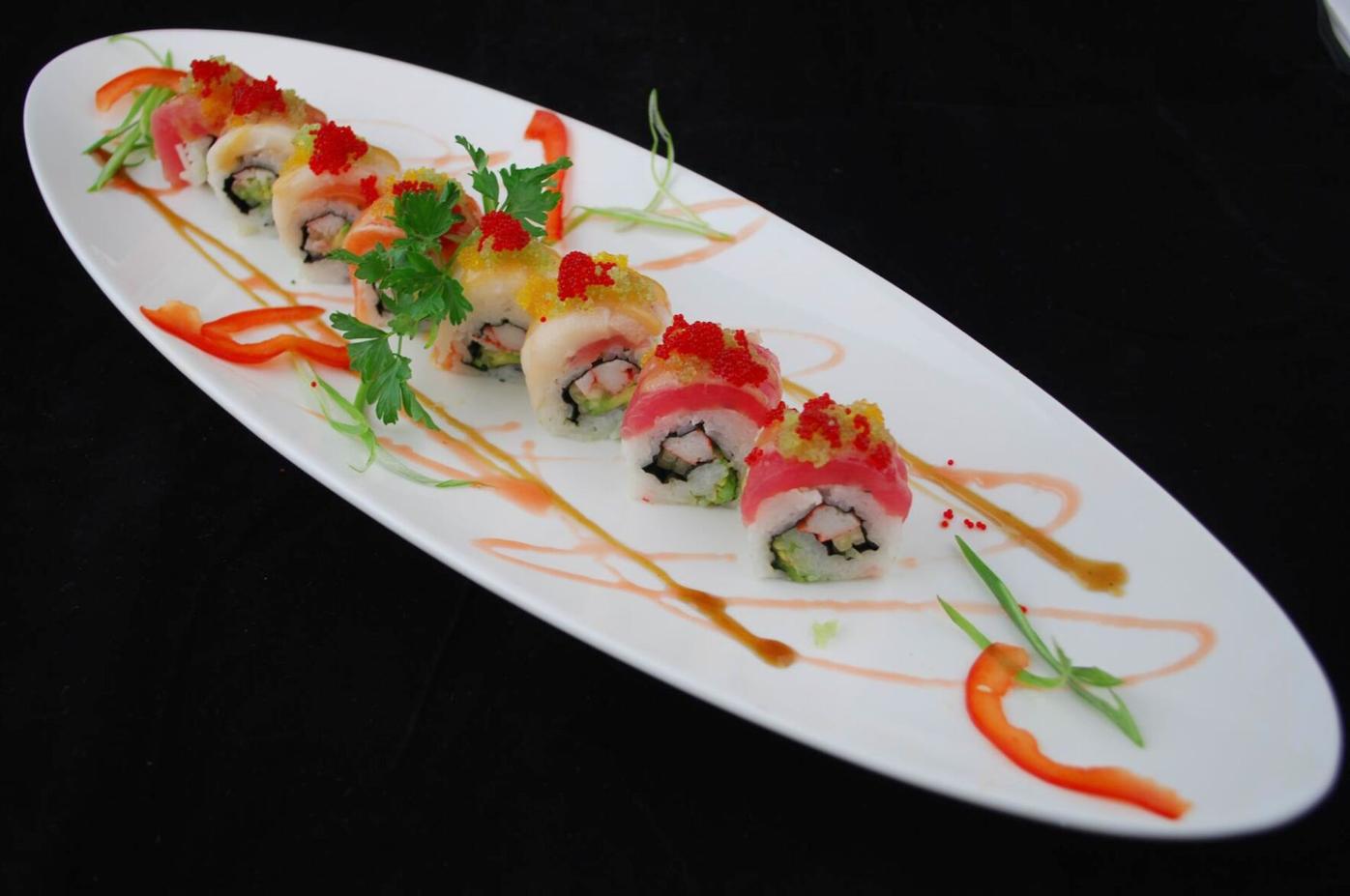 Pictured is a sushi roll from Saito – Sushi, Steak and Cocktails in downtown Atlanta. 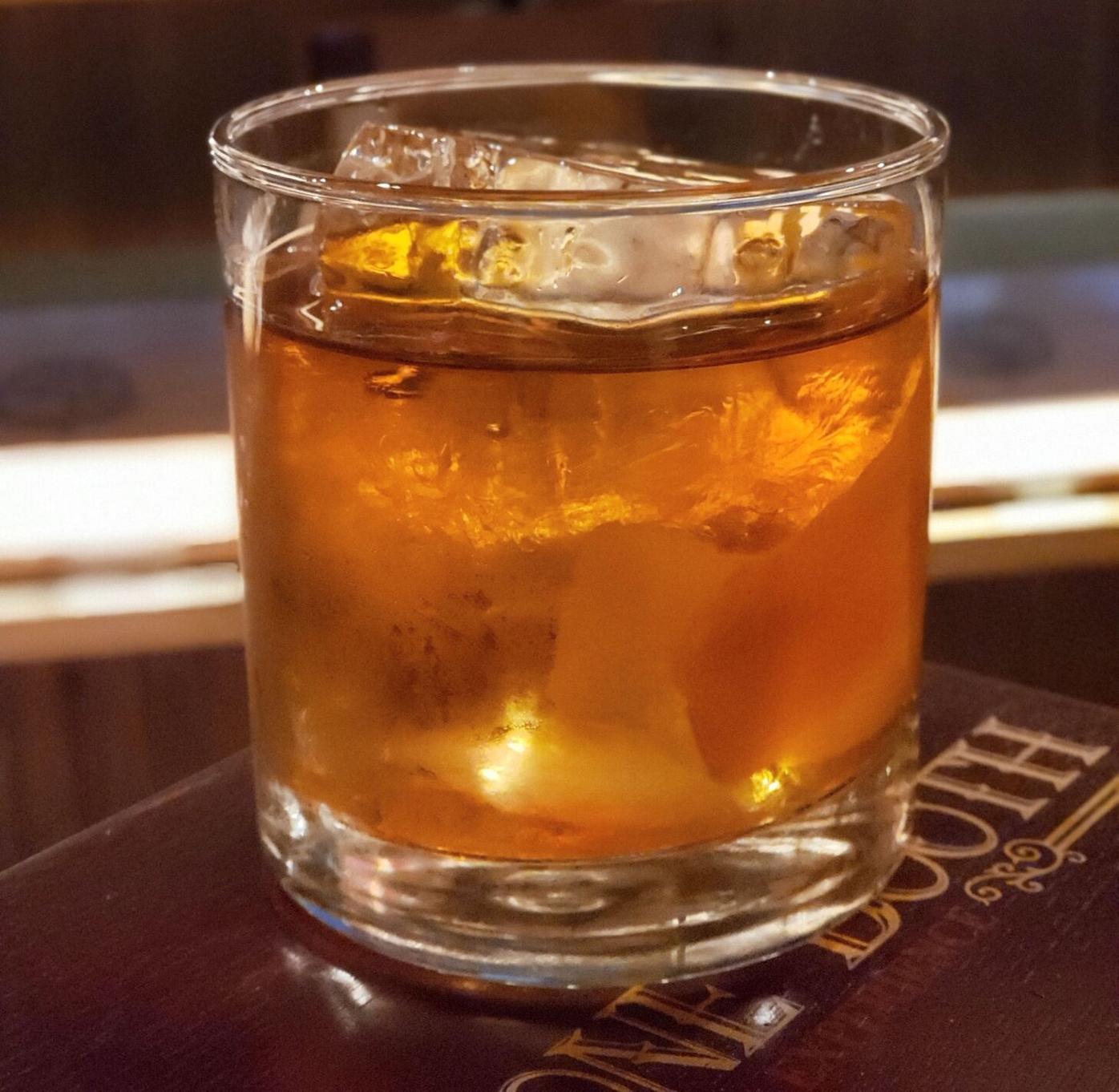 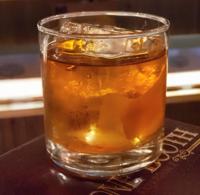 Pictured is a craft cocktail from Saito – Sushi, Steak and Cocktails in downtown Atlanta. 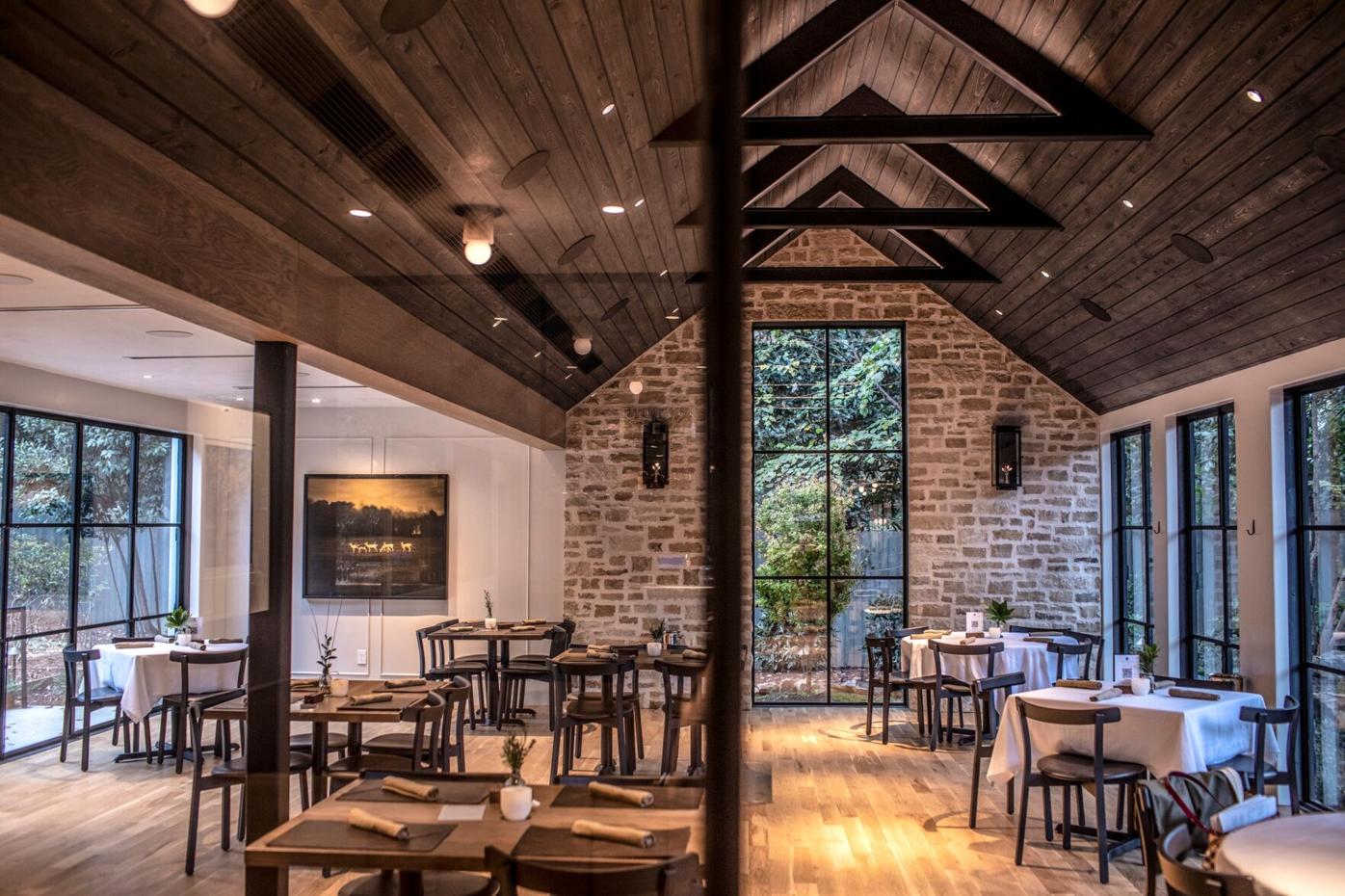 The Chastain’s interior has an open floor plan with floor-to-ceiling windows bringing in natural light. 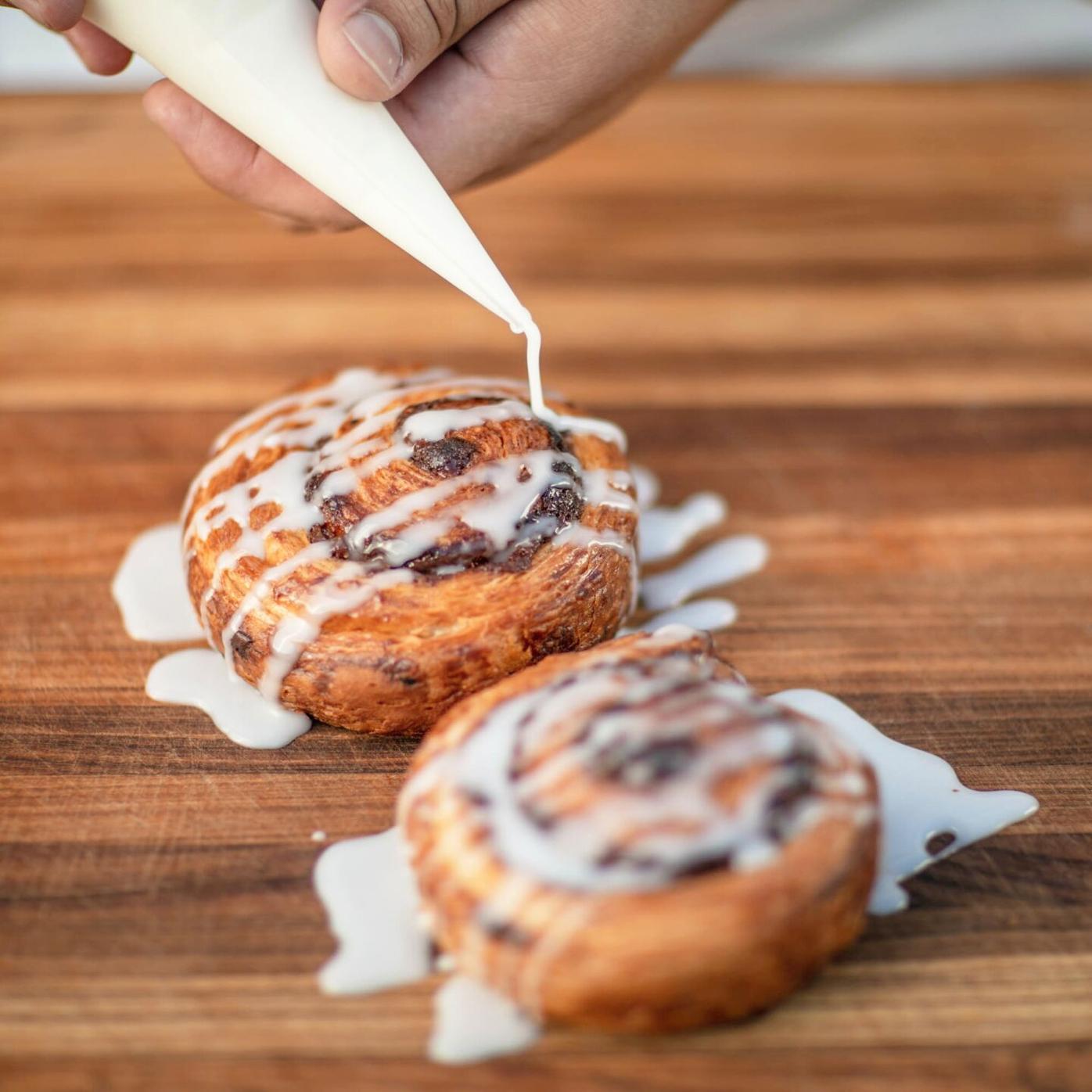 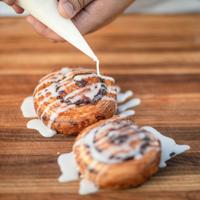 A chef puts the finishing touches on two cinnamon rolls at The Chastain.

Pictured are a sushi roll and a craft cocktail from Saito – Sushi, Steak and Cocktails in downtown Atlanta.

Pictured is a sushi roll from Saito – Sushi, Steak and Cocktails in downtown Atlanta.

Pictured is a craft cocktail from Saito – Sushi, Steak and Cocktails in downtown Atlanta.

The Chastain’s interior has an open floor plan with floor-to-ceiling windows bringing in natural light.

A chef puts the finishing touches on two cinnamon rolls at The Chastain.

This article was updated Dec. 18 at 10:27 a.m. with new information on The Chastain restaurant.

In spite of the COVID-19 pandemic, four local restaurants opened recently or announced plans to add a new location.

Saito – Sushi, Steak and Cocktails, a partnership between three restaurant veterans, is expected to open by the end of December.

“Located downtown in the former Regenstein’s department store, the 2,200-square-foot restaurant will feature Pacific regional influence that truly inspires Saito as he utilizes fresh tropical fruits, balancing delicately with the freshest fish flown in daily to create magical rolls, sashimi that melts in your mouth, and other inspired dishes,” a news release stated.

The partners are also developing a beverage program, using techniques from next door at Red Phone Booth and traditional Japanese ingredients such as shiso and yuzu. Rare Japanese whisky will be showcased, served over double reverse osmosis ice pressed into a sphere from a Taisin ice mold.

“To have the opportunity to work alongside Master Chef Saito again is truly an honor,” de Haan said in the release. “His tradition, eye for detail, and passion for service truly will deliver an unforgettable experience for our guests.”

Born and raised in Fukushima, Japan, where he began his sushi apprenticeship at the age of 12, Saito is one of only a handful of exclusive master chefs in the United States. Graduating from the Tokyo Chef School, he apprenticed in Japan for more than 10 years.

Since then Saito has opened more than 30 successful restaurants in New York, Las Vegas, London, Paris, Aspen and Hollywood. But the rest of his career has been spent in Atlanta.

Cubanos ATL, a Cuban sandwich and coffee shop that opened in a tiny house in Sandy Springs in August, is expanding.

Cubanos offers a variety of Cuban sandwiches that focus on locally sourced organic ingredients which complement owner Ozzy Llanes’ generational family recipes. He has partnered with Tampa’s La Segunda Central Bakery, the oldest Cuban bread maker in the United States, to provide bread for the sandwiches.

Boone’s is one of the last amenities to open at the course, which underwent a year-long renovation project to transform the course from an 18-hole one to a nine-hole reversible one. While the new course opened in November 2018, other parts of the property’s redevelopment continued until this fall.

Boone’s is located inside the course’s Murray Golf House, offering upscale, new American cuisine with panoramic views of the links.

“Bobby Jones was such a significant figure in golf, and a course named after him should have the same standard of excellence,” Brian Conley, the course’s general manager, said in a news release. “We are proud to add the Georgia Golf Hall of Fame, the Ed Hoard Golf Shop, Boone’s restaurant and the Dan Yates Putting Course to the list of experiences already offered at Bobby Jones Golf Course. We are excited to welcome guests old and new to join us as we enter the next era of golf.”

For more information or to make a reservation at Boone’s, visit www.bobbyjonesgc.com.

The Chastain, a new restaurant that transformed from the Horseradish Grill in that eatery’s space next to Chastain Park in Buckhead, opened earlier this fall.

Horseradish Grill, which was sold last year by owner Steve Alterman after being in business for nearly 25 years, closed Feb. 15 for a renovation project to morph it into The Chastain. It was acquired in partnership with local investment firm ASH Ventures, and Christopher Grossman is the executive chef and operating partner. Juan Cortes leads the beverage program.

According to a news release, Grossman “will draw inspiration from the best local ingredients and seasonal harvest to create dishes ranging from classic favorites to inventive new takes.”

“Everything at The Chastain will be made from scratch and prepared to showcase Grossman’s decades of experience in some of the nation’s top kitchens,” the release stated. “He is creating the menu around a variety of craveable dishes as a ‘choose-your-own-adventure’ to be enjoyed in a comfortable setting.”

The City of South Fulton passed several COVID-related ordinances, including a mask mandate for restaurant employees interacting with customers.

Chastain Park Conservancy announced the 2,500 daffodils its volunteers recently planted to honor the children who died in the Holocaust have bloomed.