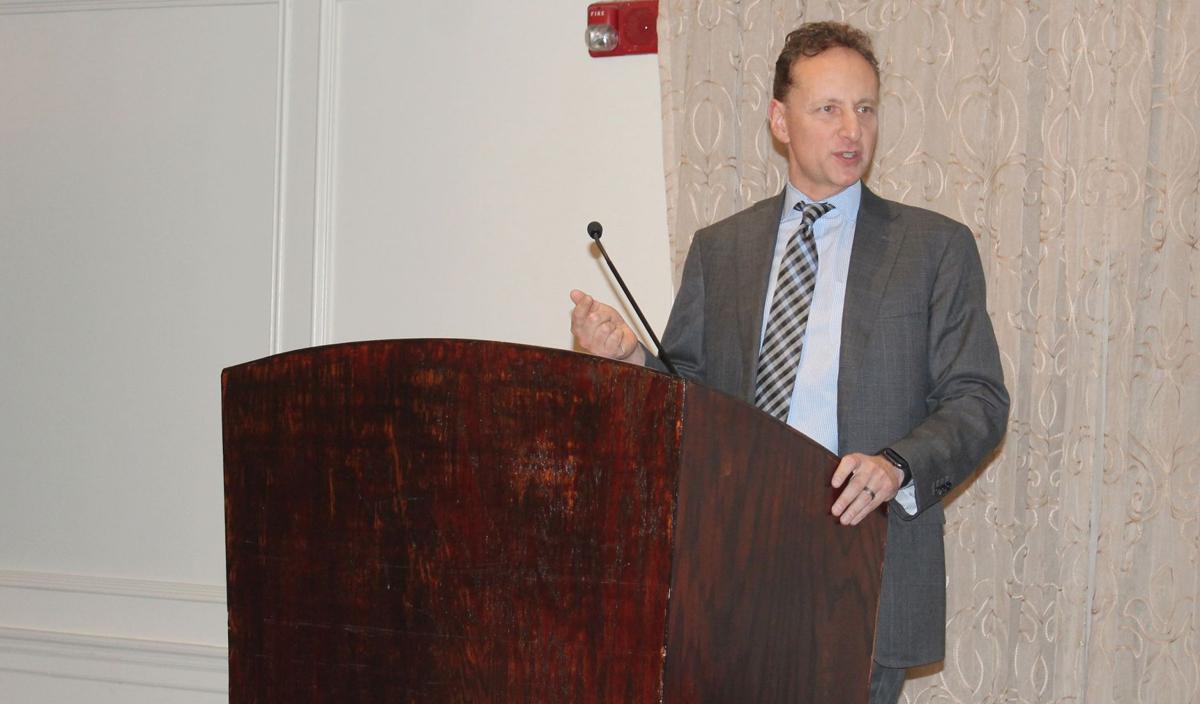 Matt Bronfman, principal and CEO of Jamestown, speaks at the Buckhead Business Association’s annual luncheon Feb. 6 at 103 West in Buckhead. 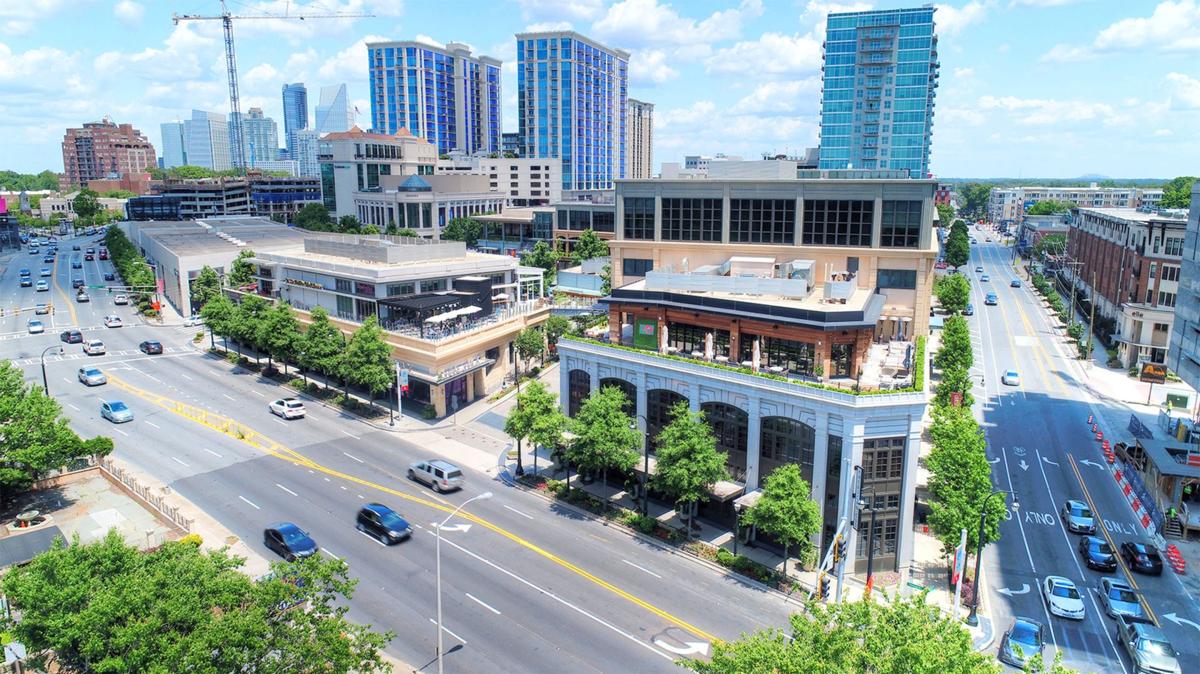 Spread out over six blocks, The Shops Buckhead Atlanta includes 356,000 square feet of office space, including Spanx’s headquarters; 290,000 square feet of restaurant and retail space and 370 high-rise apartment homes and penthouses, according to its website.

Matt Bronfman, principal and CEO of Jamestown, speaks at the Buckhead Business Association’s annual luncheon Feb. 6 at 103 West in Buckhead.

Spread out over six blocks, The Shops Buckhead Atlanta includes 356,000 square feet of office space, including Spanx’s headquarters; 290,000 square feet of restaurant and retail space and 370 high-rise apartment homes and penthouses, according to its website.

This article was updated Feb. 7 at 1:42 p.m. with additional info and quotes.

“I think the true name of the project should be Buckhead Village,” Matt Bronfman told the Buckhead Business Association, drawing applause from the crowd.

Bronfman is principal and CEO of Jamestown, the Buckhead-based real estate investment and management company that reportedly bought The Shops from San Diego-based developer OliverMcMillan for between $175 million and $200 million in a deal publicized by the media in March but finalized in August.

The new name refers to the area’s traditional name for the blocks that take up the heart of Buckhead. Bronfman made the announcement at the association’s annual luncheon Feb. 6 at 103 West in Buckhead.

In an interview afterward, he said the name change will take place in March or April, when Jamestown announces a rebranding launch.

In September 2014, seven years after its predecessor development’s groundbreaking ceremony, the Buckhead Atlanta project finally opened. Construction on the development, originally owned by Ben Carter of Buckhead-based Ben Carter Properties and called the Streets of Buckhead, ceased in February 2009 due to the recession.

In August 2012, OliverMcMillan took over the project, which was scaled down some and renamed Buckhead Atlanta, with The Shops name added mainly to market its restaurants and stores. Over the years the restaurants have had mixed results with some, such as Thirteen Pies, closing and others, like Le Bilboquet, thriving.

Critics have also said the retailers there priced their merchandise out of most individuals’ budgets.

Bronfman said he wants to The Shops/Buckhead Village to be a place where individuals and families “linger there” like they do with Jamestown’s other properties, such as Atlanta’s Ponce City Market and Westside Provisions District.

“We see it as an incredible opportunity; that’s what we had here with Buckhead Village,” the Buckhead resident said. “There were mistakes made in how it was done. It was not enough of a community center. People don’t want to linger longer. They come and go to a restaurant and then they leave. One of the big challenges we want to address is getting people to stay. You’re going to see over time a coffee shop, salad options, a bookstore. You’ll see things that make you want to stay.

“One of the mistakes of the past was the need to create a Rodeo Drive in Buckhead. It’s not like we’re going to put in a Target, but we need to put in more things that are accessible to a great majority of Atlantans I ask people here if they shop there and they say they don’t. That’s a real shame. We need to give people a reason they want to stay.”

Bronfman also said the transition into the type of shopping center Jamestown envisions could take years.

“It’s going to take time because a lot of those tenants are on very favorable leases,” he said. “If I could wave a magic wand, I would get a lot of those tenants out. … It’s going to take a while to accomplish our goals. But the bones are so great we think we’ll be successful. You’ve got a couple of good restaurants, but you don’t have enough places people will want to stay. … We’re going to fix it, but it will take more time we would like.”

During a Q&A after his speech, a woman asked Bronfman, “What about the play side of things (at Buckhead Village) and families that are (within) walking distance. Is there any play, fun space (planned)?”

Jamestown has about 450 employees overall and a second headquarters office in Cologne, Germany. In addition to its Atlanta properties, it owns others in the U.S., Latin America and Europe, including New York’s Chelsea Market and One Times Square and San Francisco’s Ghirardelli Square.

Bronfman has spent 22 years at Jamestown and has been its CEO since 2012.

“Under Matt’s leadership, Jamestown has grown its portfolio of assets in the U.S., expanding to Latin America and Europe,” said Dr. Bahar Nia, owner of Buckhead Cosmetic & Family Dentistry, who introduced Bronfman prior to his speech. “With more than 25 years of experience in real estate, he has led the acquisition, redevelopment and oversight of over $20 billion in projects.”

Bronfman said Jamestown looks at three criteria when it considers purchasing a property, with the first being demographics.

“Atlanta has great demographics. It’s one of the neighborhoods we hunt,” he said. “Second, I like supply constrain markets. I like neighborhoods where the residents have strong opinions. We like New York, DC, Boston. (They) are all highly regulated markets where it could take years and years to get the zoning for your project. But when you do real estate, it’s something that will last for a generation or longer. …

“The third thing we like is non-commodity specialty real estate. We don’t want to buy a (Class) B office building in the middle of nowhere. But we like special assets.”

Regarding The Shops/Buckhead Village, Bronfman said Jamestown plans to solve some valet and self-parking problems and to add greenspace there. He added Buckhead has branded itself well worldwide.

“People always say, ‘Do you live in Atlanta? Do you live in Buckhead?’ I really mean that. Buckhead has the best name recognition. I can go to Abu Dhabi, Frankfurt or Tokyo and hear that,” he said, drawing applause from the crowd. “That’s as good as it gets.”

A new Buckhead apartment community with a familiar name has opened.

Four months after Jamestown reportedly purchased The Shops Buckhead Atlanta, the high-end retail, restaurant and office center in the heart of…

As the Buckhead Coalition moves forward with its plan to replace co-founder Sam Massell as its president, there are five candidates for the jo…

If you want to eat Horseradish Grill’s skillet-fried chicken or any other signature items on its menu, you better hurry. The Buckhead restaura…

Report: Rome man hit woman in the back of her head with a rock