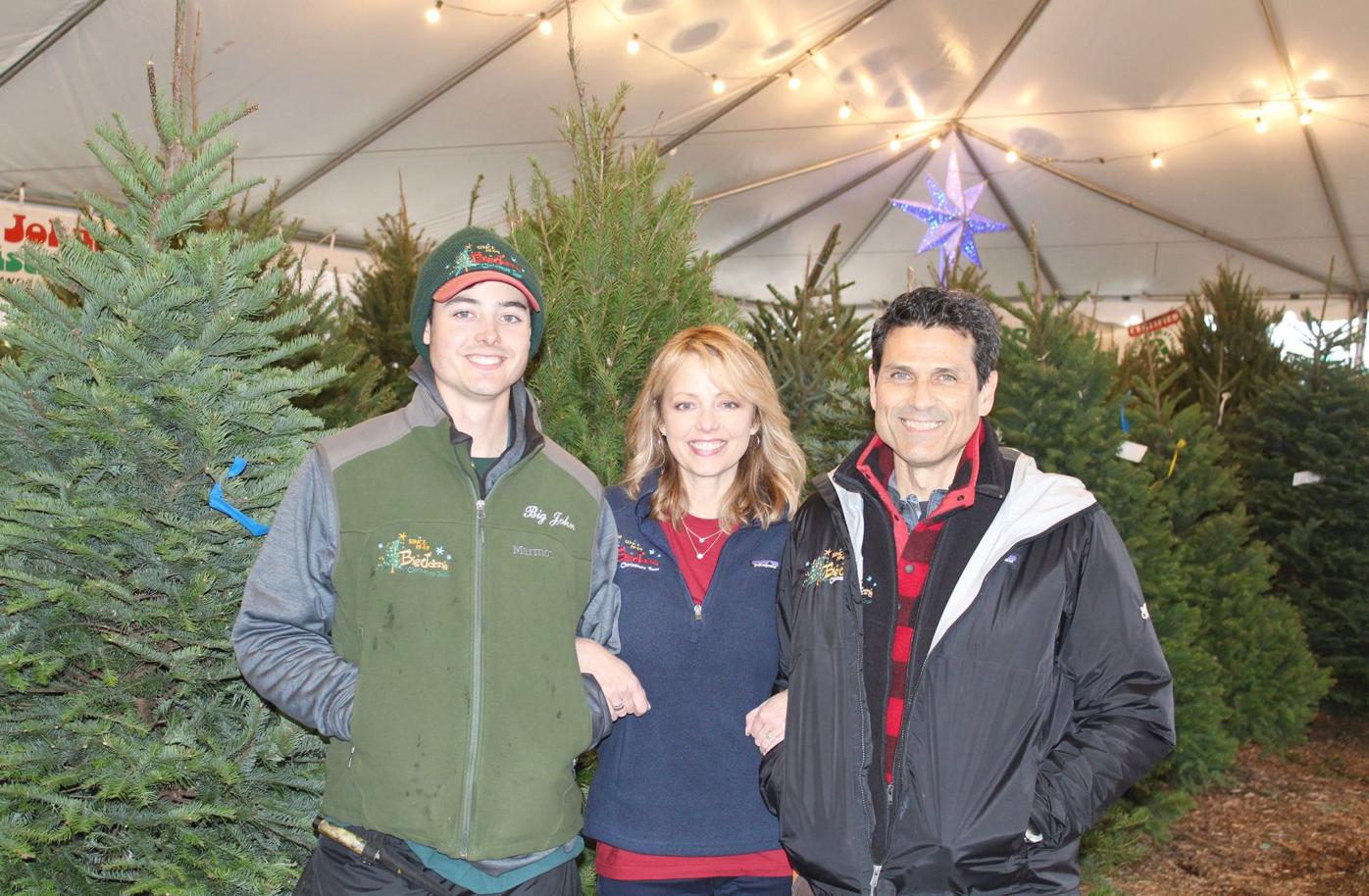 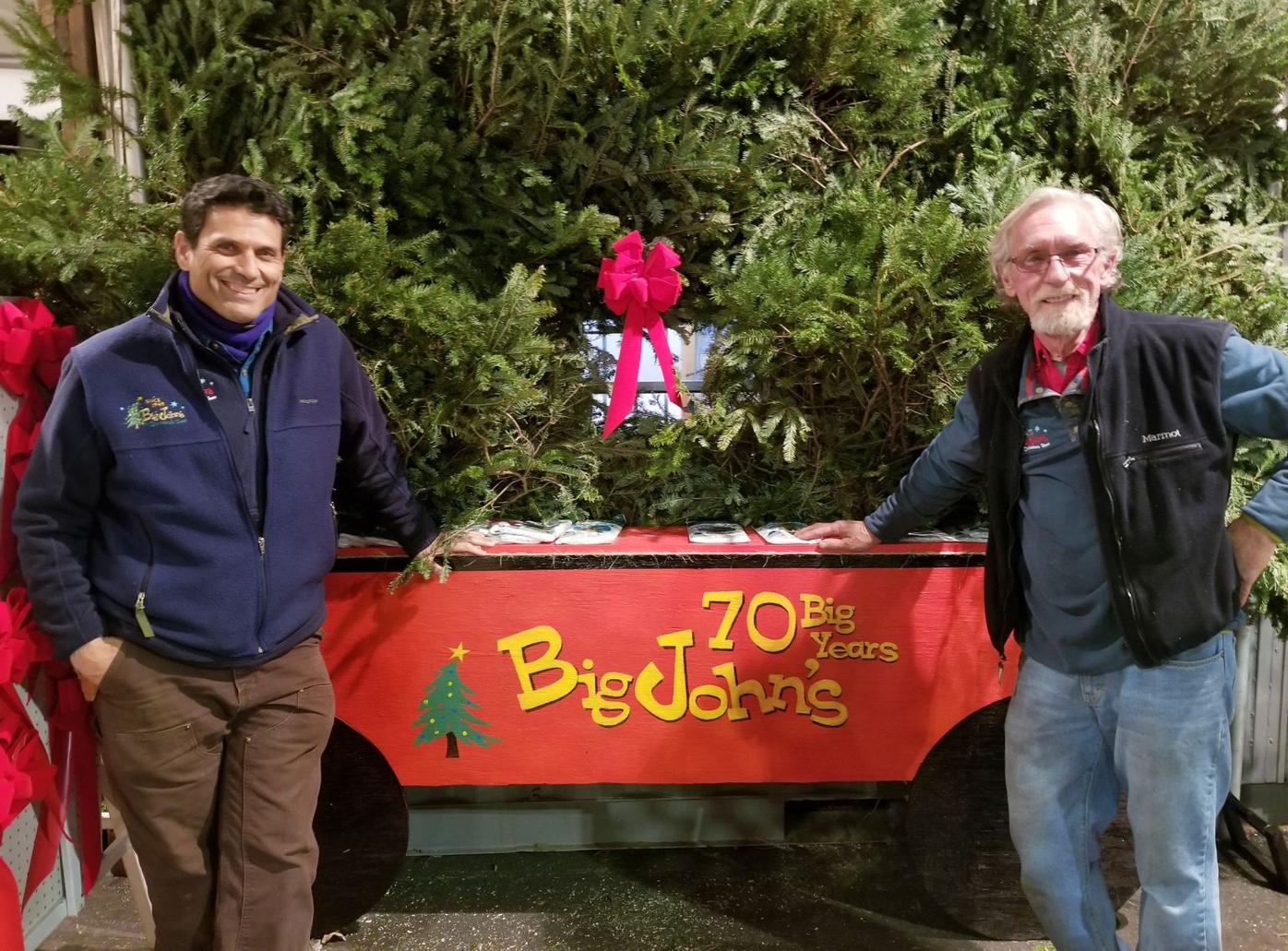 From left, Jimbo Livaditis and Clee Atkinson stand by the Big John’s Christmas Trees’ 70th anniversary logo at its Ansley Mall location. Atkinson’s nephew, who also works for the company, painted the logo.

From left, Jimbo Livaditis and Clee Atkinson stand by the Big John’s Christmas Trees’ 70th anniversary logo at its Ansley Mall location. Atkinson’s nephew, who also works for the company, painted the logo.

David Fisch was a skinny, 18-year-old college freshman when he started working for Big John’s Christmas Trees in Atlanta in 1987, after a friend who’d worked there the previous season recommended it.

“At the time I was 5-10, 160 pounds soaking wet, and (current owner/CEO Jimbo Livaditis) took one look at me and was like, ‘I probably don’t have space for you here,’ he said. “He sent me to his brother (Lee), who was working at the main lot. So that first day I think I unloaded six semis of Christmas trees. At the end of the day, Lee said, ‘You must need some money bad.’ I said, ‘Well, sir, it is Christmastime,’ and he said, ‘I’ve never seen anyone your size work that hard. We didn’t expect you to last ‘til lunch.’”

Fisch has worked for the company off and on for the 32 years since then and is the price manager for its Buckhead location. Big John’s is celebrating its 70th anniversary this month. Fisch said some new hires never made it through their first day.

“That’s what happens with these lots,” he said. “A lot of kids will show up and it looks nice because you’re selling trees, but it’s hard work. I’ve seen a lot of guys, big guys, at lunchtime go, ‘I’m going to lunch’ and never come back, not even … to get paid. They just disappear.”

Clee Atkinson, who started working at Big John’s when he was only 15, did so because some of his friends’ older brothers worked there in the early 1960s. Today he is the lot manager for the Big John’s Ansley Mall location near Midtown and the company’s longest tenured employee, having worked there 54 years.

“In ’65 we were big enough to work there and a friend got me a job there,” he said. “It got in my blood ever since then. I can’t get away from it. It’s like a vacation every year. I’ve done it so long, whatever you want to know, I’ve done it. Whenever they got a new lot started, (the owners) would send me out there. In the early days you had to do it all. That teaches you everything and you carry on from there. I love the trees. There’s something about it.”

Big John’s was founded in December 1949 by Jimbo and Lee’s father, John Livaditis, who owned a Zesto restaurant on Peachtree Road in Buckhead. At the time Zesto only sold ice cream, so he started selling Christmas trees in the restaurant’s parking lot when food sales lagged due to the cold weather.

Over the years Big John’s grew to a peak of 22 locations in 2002 after Omni, a competitor, exited the business and allowed the company to sell its trees at those lots, Jimbo said. Today Big John’s has nine locations, including Vinings and Brookhaven.

Jimbo said his father sold one or two truckloads of trees during the first year, and he hopes to sell 1,000 trees per lot in 2019.

John retired in 1988 and died seven years later, and Lee died in 2016. Over the years Jimbo’s wife Leigh Ann, as well as their three children – John, 23, Lucas, 20, and Anastasia, 17 – started working at Big John’s. All five are there year-round except Lucas, a student at the University of South Carolina who works whenever he’s home from school during the holidays.

“It’s really weird doing it now with my family versus doing it with Lee and my dad,” Jimbo said. “I don’t know if Dad ever anticipated it would get to this scale. I know that it was a sideline (then). It was a necessary sideline. We still depend on Christmas tree revenue for sure. It’s mostly a labor of love. …

“I’ve been doing this since I was 7 or 8 years old. If I didn’t have the knowledge I had by osmosis, from whatever I’ve learned or picked up, I don’t know if I would have done this. I’ve always said, ‘Why go to Las Vegas when there’s gambling every Christmastime bringing in truckloads of Christmas trees? … Our (children) appreciate everything now. It gives you a good perspective.”

Jimbo and other family members spend several days each year visiting tree farms in six states, as close as North Carolina and as far away as Washington state, to select the trees they want delivered to their lots. Those interviewed for this article all said quality is one of the things that sets Big John’s apart from its competitors.

“It’s really fun to walk through those plantations of Christmas trees with the grower explaining to us his process and how hard it is to be a farmer, how hard it is to find labor,” said Leigh Ann, the company’s vice president. “Just the fact that we have that connection with the actual grower. We’re not just ordering blindly. They’re kind enough, because of the long-term relationships his dad had maybe with their dad, grandfather or mom, that they allow us to go into their select fields.

“They often save some for themselves since they’re retailers, too. They will let Jimbo and John, they have certain tags they’ll allow them to put on the trees. They cut those trees knowing they’re going to Big John’s. It’s almost like a concierge service for a lot of our customers. He’s hand-picking these special-order trees.”

Jimbo said he calls the trees “works of art,” adding, “You see a tree that has some balance and symmetry and it has texture.”

“I just kind of have grown up and learned a whole lot in business and customer service and relationships and how to do things the right way,” Fisch said. “That’s what Jimbo and Lee taught me through the years: how to run a business, how to watch the bottom line and how to do it the right way. To take care of not only the people who work for you but the customers.”

Atkinson, 69, who retired in 2010 from his regular job in mechanical and electrical contracting, has also worked at Zesto. So has Fisch, whose career has also included his own restaurant business.

“People have problems with stress and stuff like that in their lives. This is a stress relief for me,” Atkinson said. “It may not be for everyone, but it’s like a wholesome vacation, like going to the mountains and working. It’s fun turning a parking lot into a jungle. I appreciate the Livaditises for having trust in me all these years. When you get up in your years, friends start leaving the planet and I just feel blessed I can do this and they let me.”

Big John’s will be selling trees at least until Dec. 22. For more information, visit www.bigjohnstrees.com.

Buckhead’s Zesto welcomes old and new as it turns 70

The Zesto restaurant in Buckhead has stood the test of time because it embraces not only the 1950s culture, even down to the Googie architectu…

Quality and service keep Henri’s humming as it turns 90

Henri’s Bakery & Deli in Buckhead has lasted for 90 years for three simple reasons.

Plenty of Atlanta activities abound to ring in new year

New Year’s Eve events around the city will offer residents many ways to party their way into 2020. The following events will take place Dec. 3…