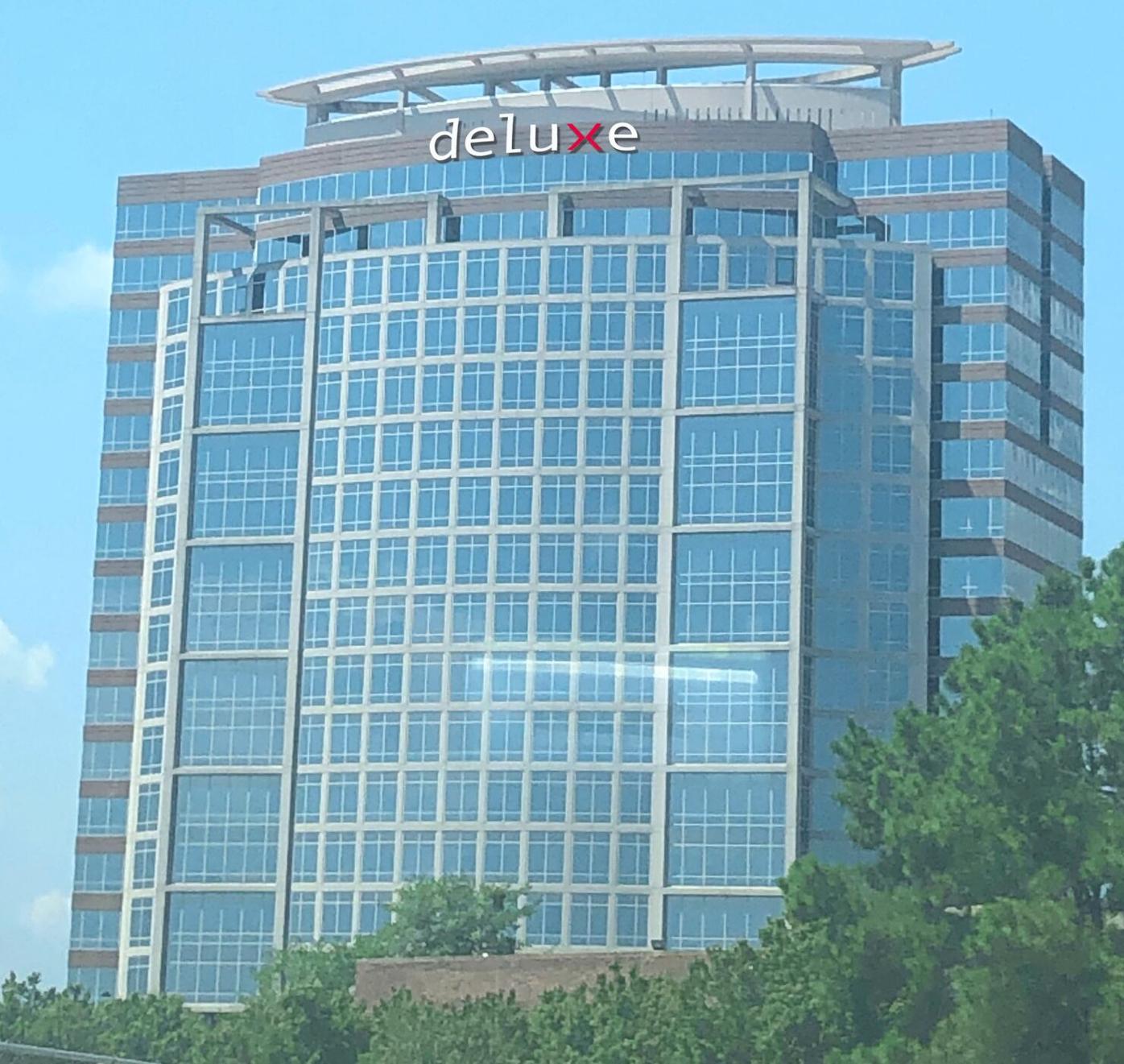 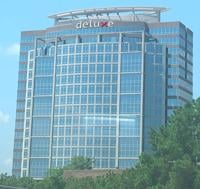 An artist’s rendering shows what the building housing Deluxe Corp.’s planned FinTech and Customer Innovation Center in Sandy Springs will look like once completed. 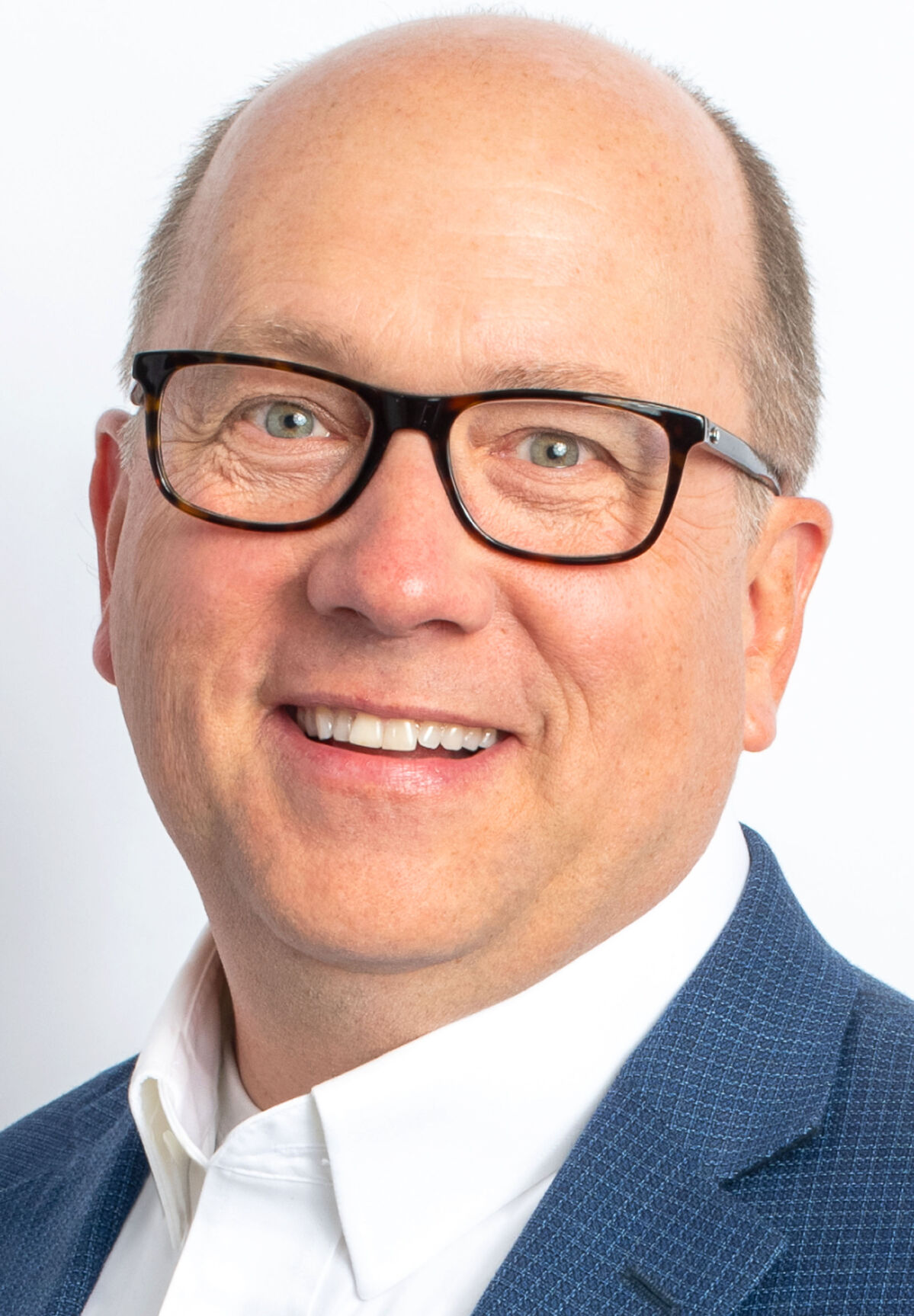 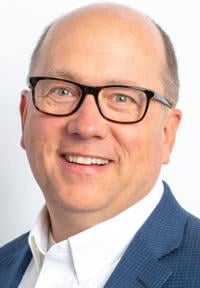 One of the nation’s biggest players in the financial technology (fintech) industry is coming to Sandy Springs.

Deluxe Corp., a Shoreview, Minnesota-based financial services company, has announced plans to open its FinTech and Customer Innovation Center in the city this spring. It will occupy building space previously held by another fintech business, Fiserv, at 5565 Glenridge Connector. The company supports 4,000 financial institutions and 4.5 million small businesses and does $2.8 trillion in payment volume annually.

The center is two facilities in one, with part dealing with fintech and the other including payment and cloud services. It will employ 709 workers over a three-year period with an average salary of $91,500, and Deluxe is investing $10.2 million for the build-out and $2.4 million for furniture, fixtures and equipment.

“We did a national-level search for the location of these two centers, and Georgia rose to the top of the list because of the extraordinary concentration of fintech and payment companies in the metro area and the incredible job the state has done in supporting the industry,” Deluxe President and CEO Barry McCarthy said in an interview.

He added the state’s support of fintech includes its colleges and universities producing top talent through its programs, plus three organizations promoting the industry: the Technology Association of Georgia, Fintech Atlanta and the Metro Atlanta Chamber.

McCarthy said Deluxe, which was founded in 1915 as a pioneer in creating flat-pocket checkbooks, still does under 40% of its business in check-related services for individuals and businesses. But with less checks being written today due to the availability of online bill-paying and other electronic services, the company, which has about 6,300 employees, is moving more toward fintech, payment and cloud services.

He said Deluxe looked at about 10 sites across metro Atlanta for the center before narrowing the search down to the north Perimeter area and then choosing Sandy Springs. The company worked with Sandy Springs and Fulton County officials on the project.

“The location of our building is just outstanding,” McCarthy said. “It’s a landmark building right there at (Georgia) 400 and (Interstate) 285 and we have the naming rights to it. The access to our building is fantastic from both 400 and 285. We are close to the (Medical Center) MARTA station, so we have a shuttle for that.”

At the Sandy Springs City Council’s Aug. 4 meeting, Andrea Worthy, the city’s economic development director, said Deluxe was considering locating the center in Sandy Springs. Up until then, it was identified only as Project Painted Lady in city documents.

At that meeting, the council voted 6-0 to approve an incentive request from Deluxe for its plans. The application would include waivers of building permit fees and business occupational taxes for tenant build-out of an existing office building in Sandy Springs.

According to city documents, because of the sensitive nature of informing employees and investors about potential relocation or expansion, Deluxe’s center was identified as a project name until the due diligence for its nationwide search for this new location was completed.

“Sandy Springs is the epicenter for financial services and innovative companies because of our convenient access to locations across the metro as well as to top talent,” Sandy Springs Mayor Rusty Paul said in a news release. “We are delighted to welcome Deluxe to our community.”

Deluxe has two other metro Atlanta facilities: one in Winder and one in Lithia Springs. Its Dunwoody office, which closed recently, has employees who are working from home but will move into the Sandy Springs center once it opens, McCarthy said.

“(It’s a) very important strategic move for the company because our future is about payments and cloud services,” he said. “We’re pulling in payments, fintech and cloud talent to create new products and services.”

One major American business could be bringing a new location to Sandy Springs.

The city of Sandy Springs is taking Mayor Rusty Paul’s mask mandate, issued in response to the COVID-19 pandemic, one step further.

Sandy Springs returning to in-person meetings but in hybrid approach

The city of Sandy Springs is returning to in-person meetings in October, following months of mostly virtual public hearings due to the COVID-1…

A month after getting approval for spending $11 million to build its new public safety facility, the city of Sandy Springs is moving forward o…

The city of Sandy Springs has taken another step forward in its plan to build a cultural center to house the “Anne Frank and the World: 1929-1…

Report: Cedartown Man pulled over for speeding, fled from police on foot