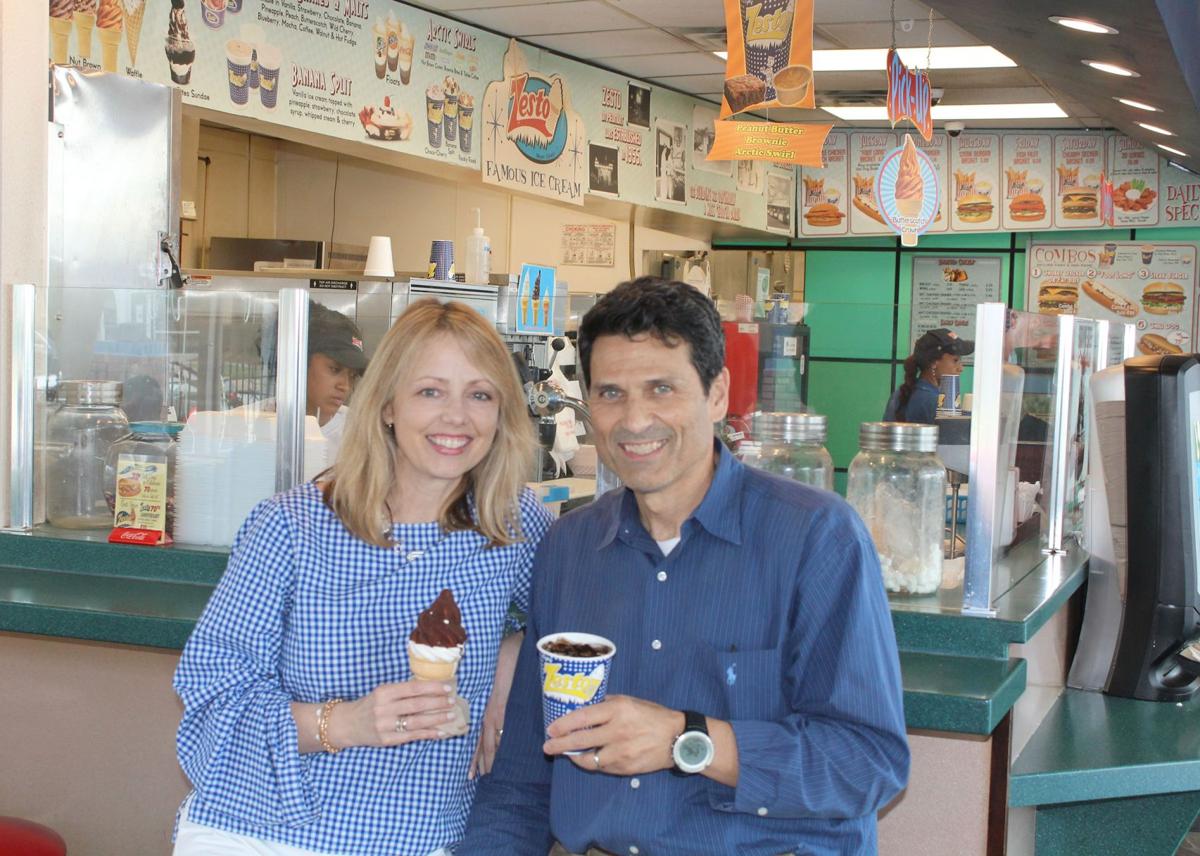 From left, Leigh Ann and Jimbo Livaditis sit inside Zesto’s Buckhead restaurant, which is celebrating its 70th anniversary July 1. 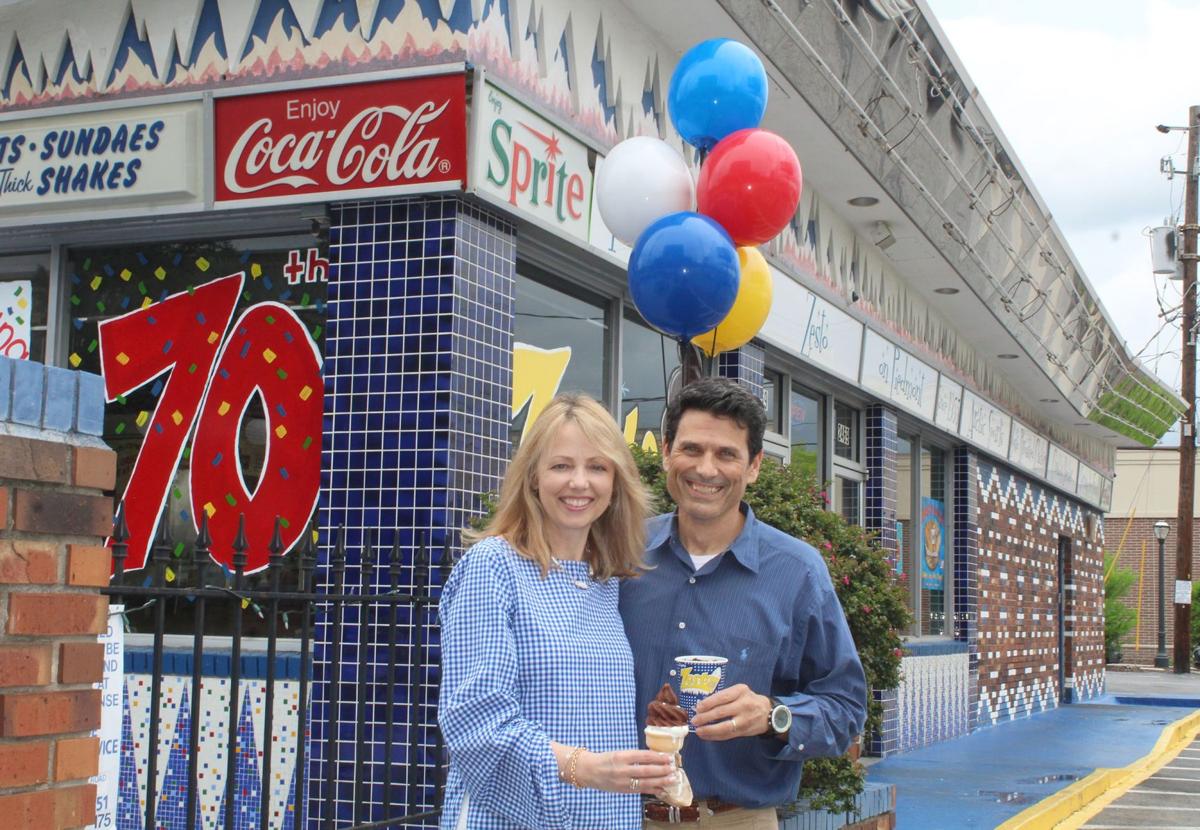 From left, Leigh Ann and Jimbo Livaditis stand outside Zesto’s Buckhead restaurant, which is celebrating its 70th anniversary July 1. 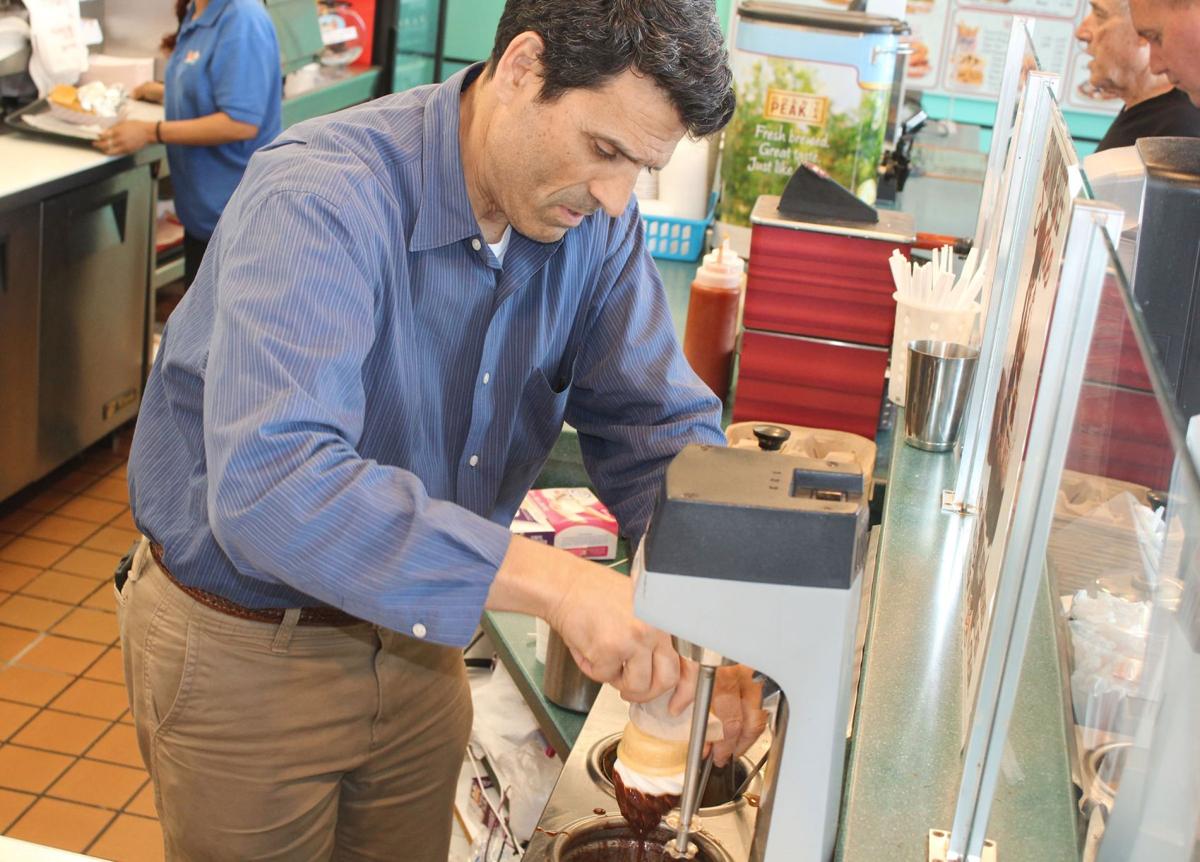 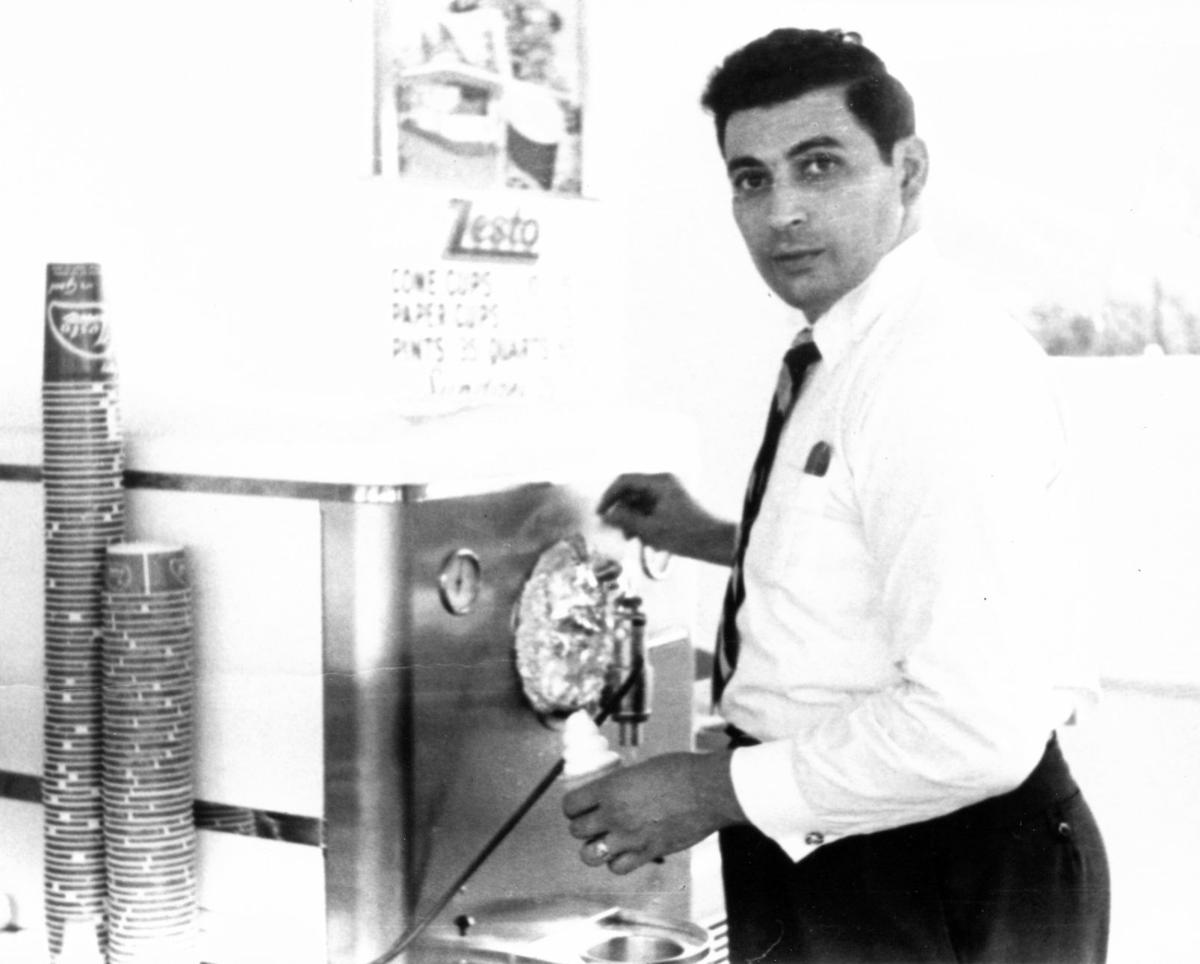 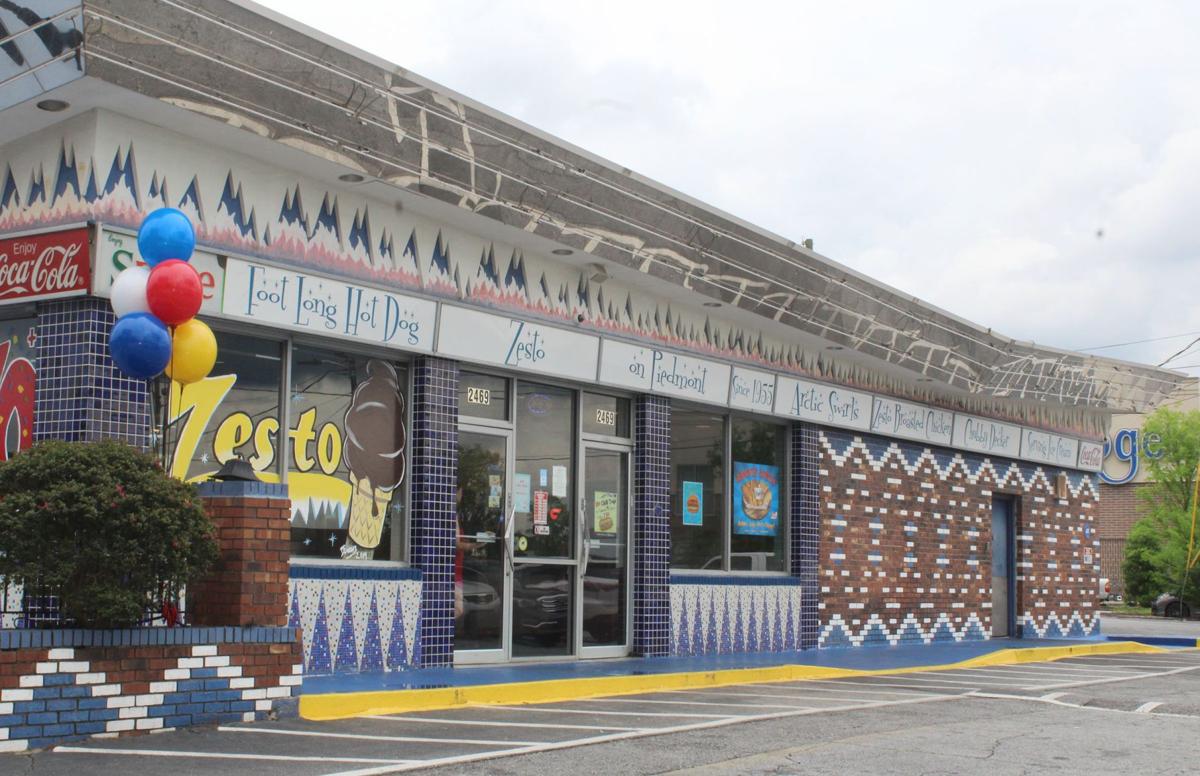 Zesto’s Buckhead restaurant, which is celebrating its 70th anniversary July 1, is an example of Googie architecture, which is influenced by car culture, the Space Age and the Atomic Age. 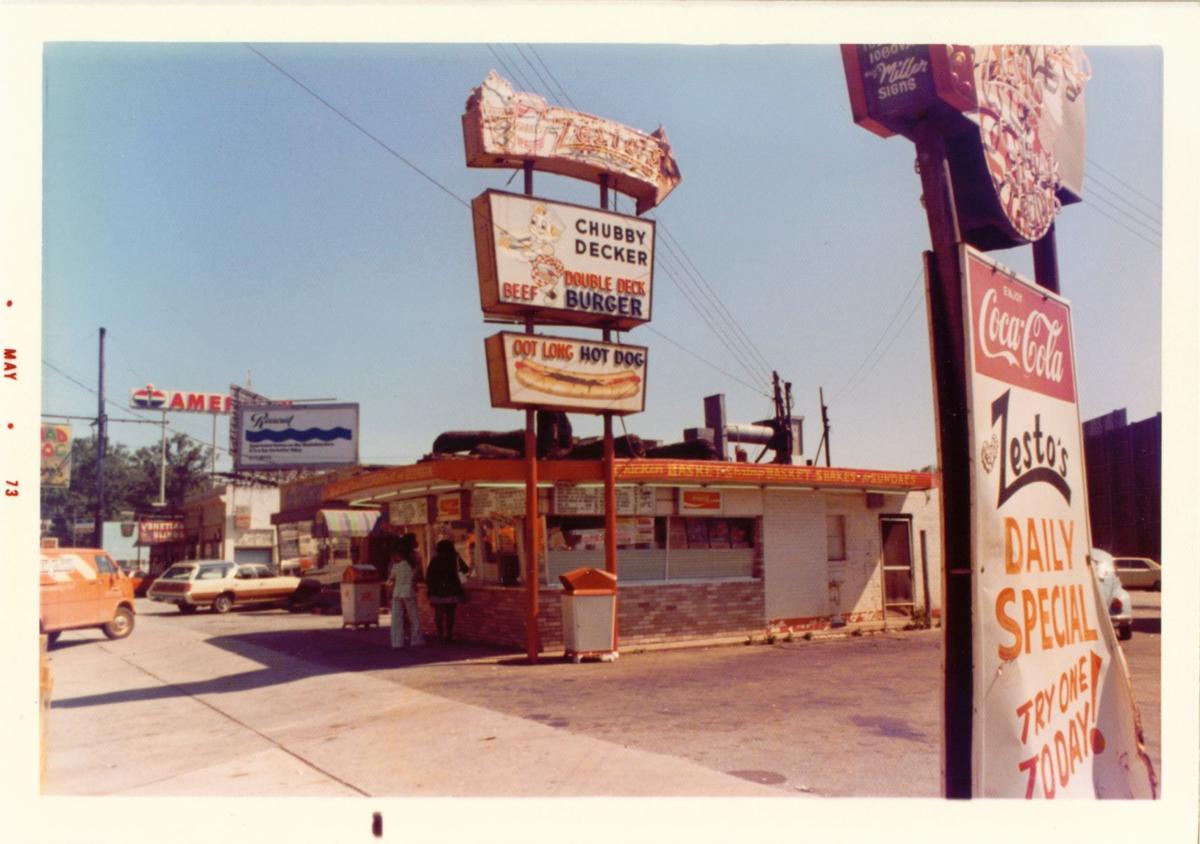 Customers place orders at Zesto’s now-defunct Peachtree Road location in Buckhead in circa 1973.

From left, Leigh Ann and Jimbo Livaditis sit inside Zesto’s Buckhead restaurant, which is celebrating its 70th anniversary July 1.

From left, Leigh Ann and Jimbo Livaditis stand outside Zesto’s Buckhead restaurant, which is celebrating its 70th anniversary July 1.

Zesto’s Buckhead restaurant, which is celebrating its 70th anniversary July 1, is an example of Googie architecture, which is influenced by car culture, the Space Age and the Atomic Age.

Customers place orders at Zesto’s now-defunct Peachtree Road location in Buckhead in circa 1973.

This article was updated June 28 at 8:47 p.m. with the date when Zesto will serve 70-cent ice cream cones with sprinkles as part of its 70th anniversary celebration.

The Zesto restaurant in Buckhead has stood the test of time because it embraces not only the 1950s culture, even down to the Googie architecture, but also the youngest generation.

“I think that it has that unique feel,” Vice President Leigh Ann Livaditis said of the eatery, which turns 70 this year. “We’re not as famous as The Varsity, but we’re that same old-school Atlanta (business). People keep telling me we’re an icon. It hit me when that rep from 680 the Fan (radio station) told me it’s more about the nostalgic all-American experience that people of all ages crave. I guess Zesto offers a comforting counterpoint to the stress of modern times.

“We’re original. We’re not a fabricated experience. These people come in here and tell me their stories about how far they come (to eat here). We have daily specials and people will come in here just for those specials. It’s interesting that we have such a following. When new youngish school kids or millennials discover us, it clicks. Nothing beats a Brown Crown (ice cream cone) or an ice cream with sprinkles on it. I think it has a unique appeal. … I like that Zesto offers a nostalgic feel-good, yet modern Instagram-able experience.”

“I think a lot of it is because of our longtime employees that have stayed with us, some 40-plus years,” he said. “We strive for a mixture of keeping it a family business and a family feel, but also bring corporate practices to keep with the times. I think it’s an OG (old-guard) feeling old-school drive-in. You don’t want to put nostalgia in people’s faces and make them drink it, so it’s not bobby socks and sock-hops, but it’s the architecture and the vibe. And I would like to think we’ve got pretty good food and ice cream.”

Zesto will kick off its 70th anniversary celebration July 1 by selling 70-cent chili dogs at all five of its locations. The four intown Atlanta restaurants are selling souvenir $10 T-shirts on that day, as well. Also, the restaurant is offering a Spicy 70th Steakburger and a mango milkshake, and plans to sell 70-cent ice cream cones with sprinkles July 16.

But it didn’t always have such a diversified menu.

Zesto started in 1945 as a subsidiary of the Rockton, Illinois-based Taylor Freezer Corp., which manufactured soft-serve ice cream machines called the Zest-O-Mat. Zesto started as an ice cream-only store and was operating in 46 states by 1949, according to its website.

The previous year, John opened his first Zesto franchise in Columbia, South Carolina, and was also hired by Taylor to oversee the opening of stores in the Southeast. In 1949 he opened his first Atlanta location on Peachtree Road in Buckhead, across from Brookwood Station. In 1955, after Taylor had grown frustrated with its franchise stores closing and dealing with unhappy franchisees, it abandoned the concept and had each franchise location fend for itself.

“At that point they said, ‘Everyone, you’re all on your own,” Jimbo said.

By then John had a total of five Atlanta restaurants, including one on Piedmont Road. In an effort to bolster sagging sales, he added hamburgers to the Piedmont Road location and as early as 1949 started selling Christmas trees in the Zesto parking lots during the holidays, when ice cream sales lagged. That business became Big John’s Christmas Trees.

By the late ’50s, all Zesto locations were selling food including burgers, hot dogs and fried chicken. The burger, named the Fat Boy, drew the attention of Big Boy Restaurants, aka Shoney’s, which threatened to sue Zesto over the similarities in name to its Big Boy burger.

So Zesto decided to change the name and held a contest to determine the new moniker. A Georgia Tech student came up with Chubby Decker, in honor of singer Chubby Checker. The name stuck and remains the restaurant’s most popular item.

By the mid-1980s, John owned 10 Zesto locations in metro Atlanta, the most at any time. He retired in 1988 and died seven years later. Jimbo and his older brother Lee co-owned the operation until Lee died in 2016. That was when Leigh Ann, who had worked behind the scenes for years, started taking on a larger role.

“I enjoyed helping with marketing and my background was in journalism,” she said. “I came in and began a crash course in the restaurant business in the summer of 2016, and I’m still very much living that learning curve.”

Today the five locations are in Buckhead (on Piedmont Road), Forest Park, Little Five Points, East Atlanta and Tyrone, with the Tyrone one being a franchise restaurant.

Jimbo started working for his father from eighth grade on, but took on a full-time role after graduating from Davidson College in 1980. Leigh Ann said the restaurant stays hip through its social media campaign and by doing things like giving away Ariana Grande concert tickets and periodically surprising its commenters with a gift card or logo gear.

“Our social media has been a game-changer for us,” she said. “We’ve heard the sweetest memories whether it’s on Facebook or at one of the stores. I met an older gentleman who drives from Johns Creek once a month to get his chili dog fix and relive this happy childhood memory. Celebrities pop into the stores all the time. CeeLo Green was here at Piedmont recently. Location scouts know us – our stores have been used many times for filming. Donald Glover was in the kid’s meal episode of the show ‘Atlanta,’ which was shot at our East Atlanta store.

Two of Zesto’s longtime employees said they embrace the family culture Jimbo mentioned. Delores Slaughter, who started working as a cashier at the Little Five Points location in 1978, worked there until becoming general manager for the Buckhead restaurant about a year ago.

“I would say the customers (make Zesto stand out) … because to me it’s just a family business,” she said. “It’s not like you go into McDonald’s and you go in and order a cheeseburger and fries and leave. At Zesto, it’s a little bit different. You get to know the people. You see them coming back and you get to communicate with them better. You can relate. I can relate with a lot of my customers.”

Jimmy Koulouris, who started working as a cook at the East Atlanta restaurant in 1974, immigrated to America from Greece, like John’s parents did. Today Koulouris is the general manager there. Zesto stands out, he said, because of its fresh food and good service.

“We have always satisfied the customers,” he said. “It’s really fresh food every day, good food. We’re nice to the people. We give them the same chili dog and hamburger from 1974. Same menu. … The people love us. So many people come there for 40 years, 35 years.”

The employees and owners talked about what it means to see Zesto turn 70.

“It’s really nice,” Koulouris said. “We thank the people because they helped us stay in business. We give them good food and (if) you’re nice, they’re nice in return.”

Said Leigh Ann, “I think it’s really impressive that I see what a small family business this is, and through the years they kept it going with a small staff as we were, but it was teamwork and these employees who stuck with us out a sense of loyalty. And our employees take such pride in Zesto. They’re very Zesto-loyal. Their identity is part of that. What’s impressive with me is we can tell our kids.”

Jimbo and Leigh Ann’s three children – John, 23, Lucas, 20, and Anastasia, 17 – are now old enough to consider starting their careers as the next generation of Zesto owners, something Jimbo mentioned when looking back on its history.

“We miss having Lee around,” he said. “On the one hand it’s really bittersweet because I wish my father could see we made it to 70 years. (With) my mom, Anna Mae, who passed away in 1988, I would like her to have seen what we did with Ponce de Leon, winning the Architectural Excellence Award with that (now-sold) store.

“It’s interesting to see it all come to fruition. … We’re thankful to all the people who have supported us all of these years, especially the city of Atlanta.”

Of the anniversary, Slaughter said, “Oh, wow. It means a lot to me to know that I have been here almost 42 years and a person can work that long at a place that’s friendly, customers are just awesome and to work for Jimbo and Leigh Ann, I don’t think you’ll find other owners like them. It’s like a family with them.”

This was the form Georgia Tech student Allan Wilson filled out with the winning entry in a contest to rename the Fat Boy burger. The Chubby De…

In the Zesto on Piedmont Road in Buckhead, owner Jimbo Livaditis is more comfortable introducing the people that work there than talking about…

Some families pass down jewelry from generation to generation. Others hand down furniture or fine china.

For the third straight year, one local French bistro is celebrating Bastille Day by raising funds for restaurant industry workers in distress.

Taste of Atlanta announces its 2019 lineup, including a new concert

Taste of Atlanta has announced its lineup of events for the 2019 festivities, which will take place Oct. 18 through 20 at Historic Fourth Ward Park.

Lenox Square celebrates its 60th anniversary as a 'retail mecca'

David Fisch was a skinny, 18-year-old college freshman when he started working for Big John’s Christmas Trees in Atlanta in 1987, after a frie…

US gets 1st case of mysterious new Chinese illness