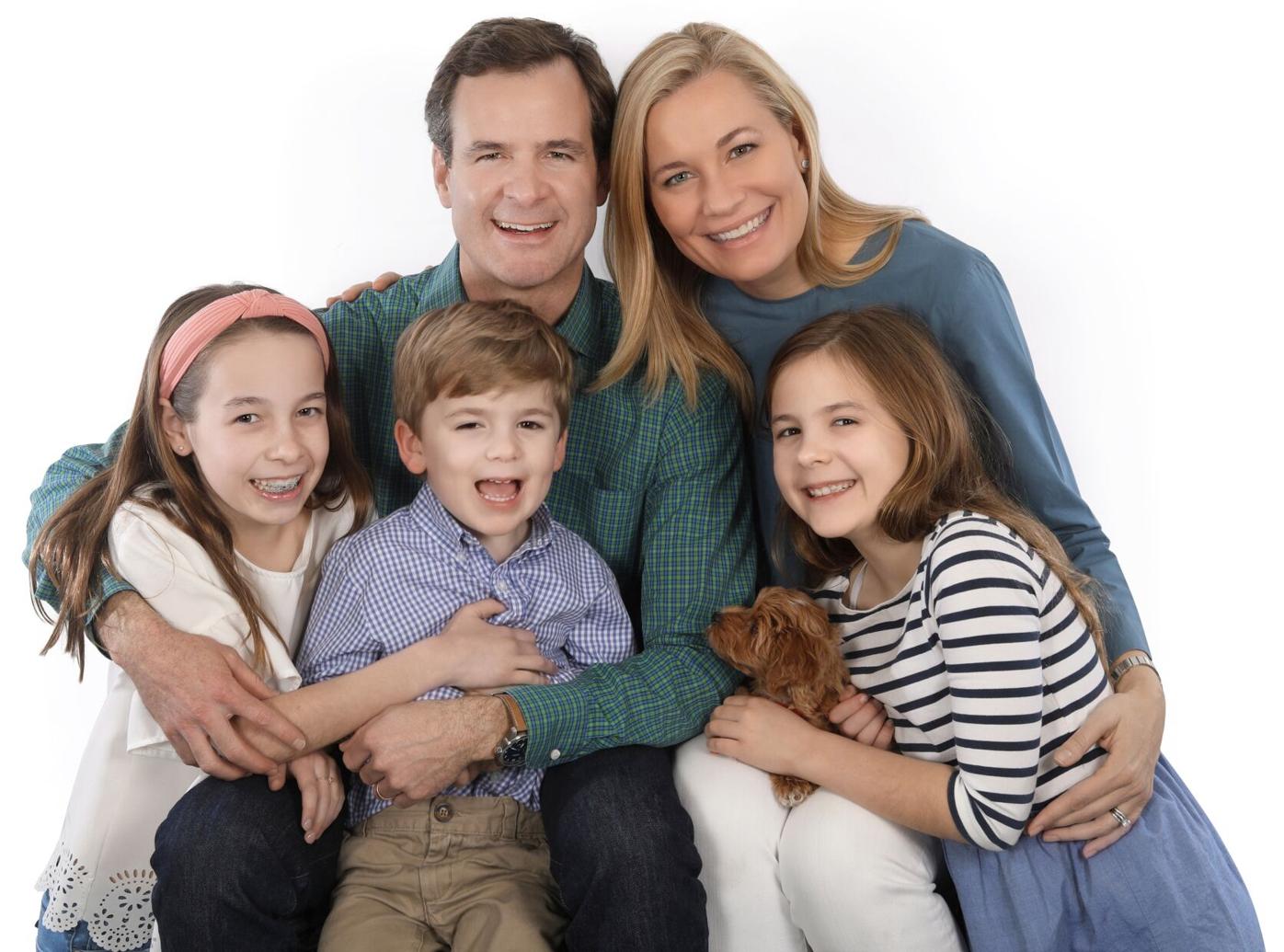 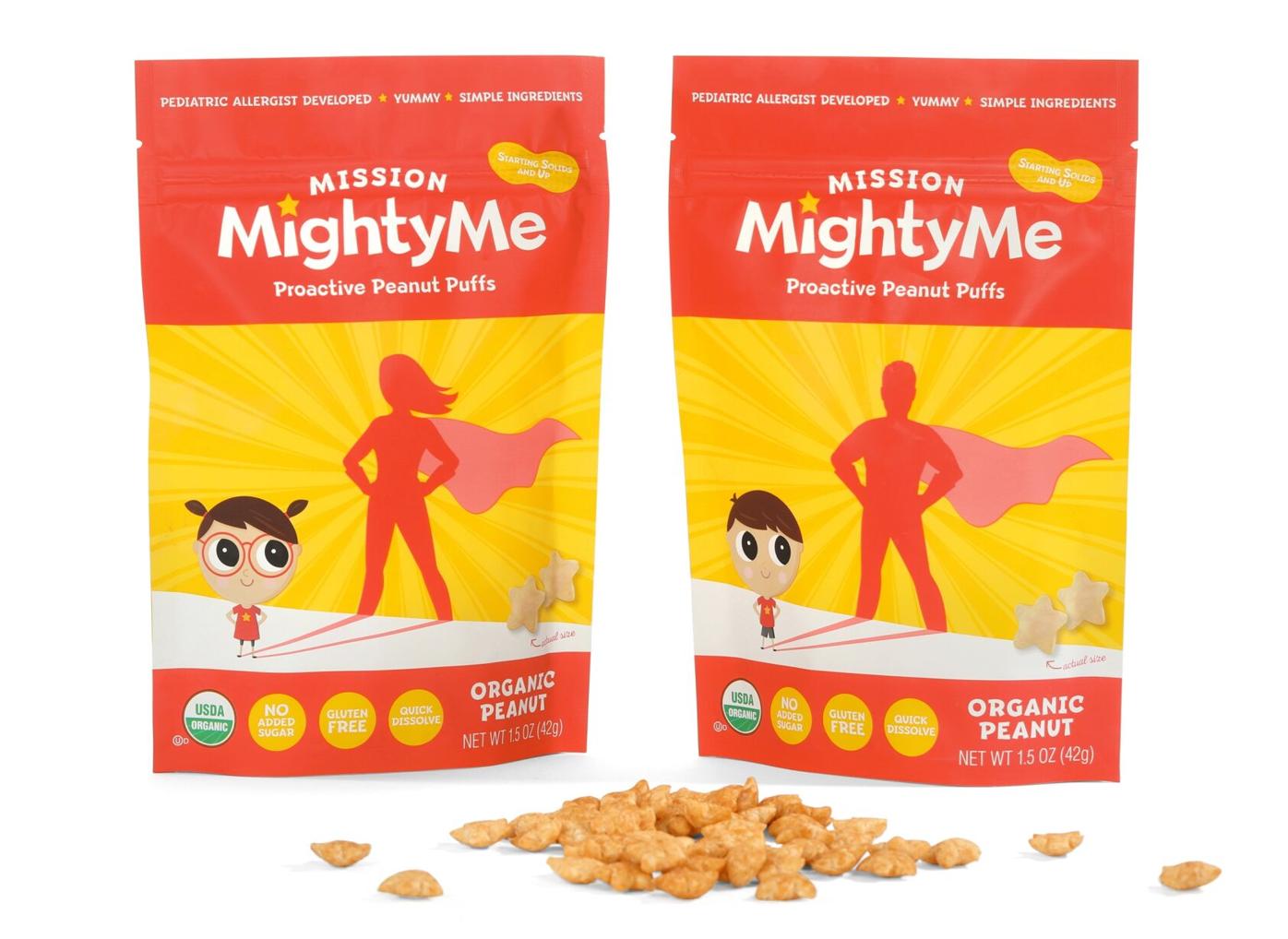 Mission MightyMe’s Proactive Peanut Puffs are safe for children as young as 4 months old to eat.

Mission MightyMe’s Proactive Peanut Puffs are safe for children as young as 4 months old to eat.

This article was updated Aug. 18 at 1:53 p.m. with corrected information and quotes from J.J. and Catherine Jaxon.

A Buckhead couple recently got even more affirmation that their efforts to keep children from getting peanut allergies are a big step in helping solve the problem.

In April, J.J. and Catherine Jaxon, along with Dr. Gideon Lack of London and Todd Slotkin of New York, launched Mission MightyMe, a new food company whose first product is Proactive Peanut Puffs, a small, quick-dissolve snack babies starting solids can eat safely as a way to introduce peanuts to their diets. Feeding regular peanuts to children that young is impossible because they can choke on them.

The couple co-founded the business after their daughter Niall, who was born in 2009, was diagnosed with a tree nut allergy just before her third birthday.

July 15, the U.S. Department of Agriculture (USDA) released its 2020 Dietary Guidelines, a set of recommendations it publishes once every five years. The latest guidelines state it’s important for parents to feed their children peanuts and eggs as early as 4 months old (see page 6).

In 2000, the American Academy of Pediatrics recommended kids not eat eggs and nuts until age 2 or 3, respectively, without any scientific data to explain why before rescinding that advice eight years later after the number of children getting food allergies skyrocketed.

The USDA’s latest Dietary Guidelines follow other organizations that also reversed course regarding nut and egg allergies after a report on Lack’s LEAP (Learning Early About Peanut allergies) study was published in the New England Journal of Medicine in 2015.

Lack, a world-renowned pediatric allergist, determined there was an 80% lower rate of peanut allergies among babies who consumed peanuts regularly than the babies in the study who didn’t have peanuts in the first five years of their lives. In 2017, the National Institutes of Health and the academy, based on Lack’s findings, gave similar recommendations for early peanut introduction. Considering the entire baby food market is allergen-free, it was game changer.

“To have these organizations come out with guidelines for early introduction (helps), so we hope they will have the ability to dramatically prevent food allergies and bring down the rate of food allergies. With Mission MightyMe, our mission is to prevent as many children as possible from having to live with the burden of food allergies.”

In a news release, Lack added, “The LEAP study proved there is a critical window in the first year of life when most babies’ immune systems can learn to tolerate peanut protein and prevent a food allergy from ever developing.”

Catherine said she and J.J. decided to start Mission MightyMe “because there’s a huge void in the marketplace and there’s very few options to include peanuts and other potential food allergens to babies’ diets in a safe way.”

Catherine added they struggled with ways to feed peanuts to their youngest of three children, James, who was born in 2015. They partnered with Slotkin, a longtime friend who co-founded FARE (Food Allergy and Research Education), a McLean, Virginia-based nonprofit that uses education and advocacy to help individuals with food allergies, especially children. Slotkin, whose twin boys are severely allergic to peanuts and tree nuts, connected them with Lack.

“What we’ve developed is a food that’s perfect for babies and it’s a food form moms and dads are very used to,” J.J. said. “It’s a quick-dissolve puff, so it’s very similar to many products or puffs that babies are already eating, but they’re made with organic ingredients and more than 50% peanuts.”

While food allergies are fairly rare (only 11% of the adult U.S. population has at least one and only 1 in 13 children has one), the Jaxons don’t want other parents to deal with having a child with a food allergy.

“Really, any food allergy is difficult for children to manage, and it really becomes a burden for the whole family,” Catherine said. “You have to be so careful about what they eat, where their food comes from and it really becomes something you have to think about all the time. Our daughter has to carry an EpiPen everywhere she goes. It’s a burden for the child, but it’s really life-changing for the entire family.”

J.J. warned that children must be fed peanut products regularly (“early and often”) to make sure they don’t become allergic to them. Importantly, he added Proactive Peanut Puffs are not for anyone with an existing peanut allergy.

“There is no cure for a peanut allergy, so once you develop one, you have to avoid peanuts altogether,” J.J. said. “That’s why prevention is so important for us, and since there is no cure, our mission is to prevent the peanut allergy in the first place.”

Proactive Peanut Puffs are sold in a box of five standup re-sealable pouches for $4.99 per pouch. The Jaxons said they also are planning to launch more products to help with other food allergies, starting with Multi-Nut Puffs, which will include peanuts and tree nuts.

For more information or to purchase the puffs, visit www.missionmightyme.com.

Task Force: Rome woman had meth, opioids in her home