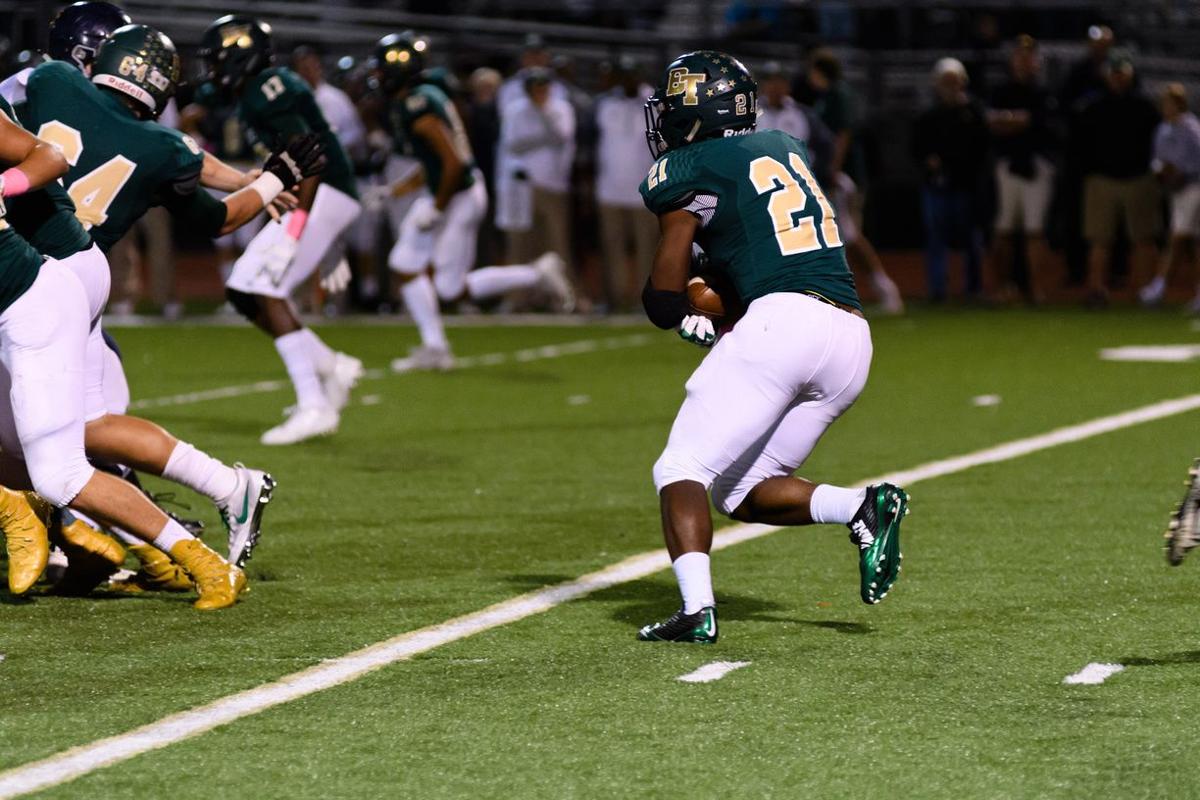 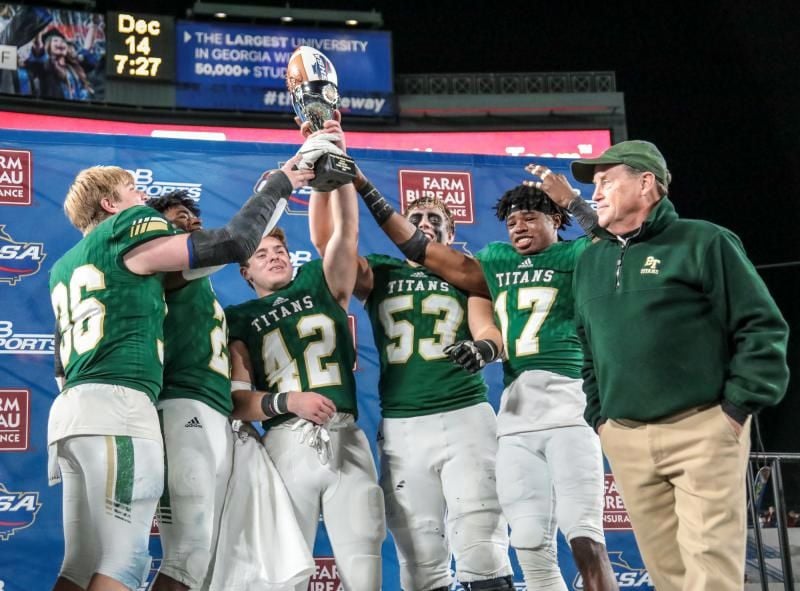 It was a historic day for the Blessed Trinity football team as the program won its third-consecutive Georgia High School Association (GHSA) Class 4A state championship with a 17-14 victory over Oconee County at Georgia State Stadium in Atlanta Dec. 14.

It's the Titans third overall title and the 12th time in GHSA history that a school has won three-consecutive state championships.

“It was a year that all of us learned a lot from the players,” Blessed Trinity head coach Tim McFarlin said. “There was no indications earlier in the year that we would play for a title but the growth and handling of close games this year was on the players. The senior class was amazing all year.”

McFarlin also became the 14th head coach in GHSA history with four state titles, earning three with the Titans from 2017-19 and one with Roswell in 2006.

“The state title was good for the school,” he said. “I don’t think about state titles as a group because each one stands out. Anytime you’re fortunate to play in the title game, you have to have good people around you committed to working with each other as a collective.”

Blessed Trinity (14-1) was powered by a game-high 203 rushing yards and two touchdowns from Elijah Green. The Titans outgained the Warriors 342-168 in total yardage in the victory.

“Elijah is an experienced guy and overcame injuries this year,” McFarlin said. “That game just showed a true reflection of him and the bond with the offensive line. Those were tough yards because Oconee’s defense was tough. What was most impressive were yards after contact. He’s also been a good role model for Justice Haynes and Englan Williams who also played well for us this year.

Oconee County (13-2) responded on its next possession with a 34-yard touchdown pass Max Johnson to West Weeks with 5:06 remaining in the first quarter for a 7-3 lead. Johnson threw for a game-high 97 yards and two touchdowns for the Warriors.

The Titans retook the lead 10-3 with 1:21 left in the second quarter on Green’s 30-yard TD run. After forcing Blessed Trinity’s defense forced a three-and-out on Oconee’s next possession, the lead was increased to 17-3 when Green took a handoff 66 yards for his second touchdown of the day with 16 seconds remaining in the first half.

The lone score of the third quarter was Max Johnson’s three-yard touchdown pass to Jake Johnson at the 49 second mark to cut the deficit to 17-14.

The teams traded possessions in the fourth quarter before Blessed Trinity produced a 17-play, 86-yard drive that started on its own 10-yard line, took 8:57 off the clock and ended on Oconee County’s four-yard line to conclude the contest. Highlights of the drive included a 38-yard pass from Duncan Reavis to Grayson Gilder as well as two fourth-down conversions on runs by Carson Harof and Green.

“Duncan’s pass wasn’t a big flashy play but he’s a reflection of the team, been a steady force and connected on the biggest pass of his life,” McFarlin said.

Defensively, Ryan Dupont posted a game-high 7.5 tackles for the Titans while teammates Ty Furnish, David Coltrane and Jackson Hamilton each posted 2.5 stops. Furnish also had two tackles for loss and a sack.

“Our defense has been good throughout the whole playoffs and gotten better,” McFarlin said. “We brought in had a whole new staff and weren’t on the same page with new terminology and strategy earlier in the year. We started putting it together around the fourth week. The secondary had to stay in coverage lengthy periods against Oconee.

Other statistics of note from the contest for Blessed Trinity were leading in time of possession 27:55 to 20:05, converting both two fourth-down conversions and not having a turnover in the victory.

The Titans were the top seed from Region 7AAAA and earned postseason victories against Troup, Baldwin, West Laurens and Woodward Academy to reach the state championship game.

Wesleyan also reached the state championship game and faced Eagle’s Landing Christian Academy (ELCA) for the Class A Private title Dec. 13. The Wolves saw their season conclude with a 33-13 defeat to the Chargers who earned their fifth-consecutive title.

ELCA (13-1) responded with 33 consecutive points in the second half including four touchdown runs by Keaton Mitchell who finished the day with a game-high 189 yards.

Wesleyan’s lone touchdown of the contest came on J.C. French’s 26-yard touchdown pass to Micah Smith with 2:36 remaining in the fourth quarter. French threw for a game-high 221 yards and Smith caught five passes for 65 yards in the defeat.

“It was a thrill to reach the finals and I’m so proud of our team for their effort and performance,” Wolves head coach Franklin Pridgen said. “ELCA is a fantastic program and we held them scoreless at the half. Unfortunately we just couldn't make the plays we needed to in the second half. Great year that will provide a lot of momentum moving forward.”