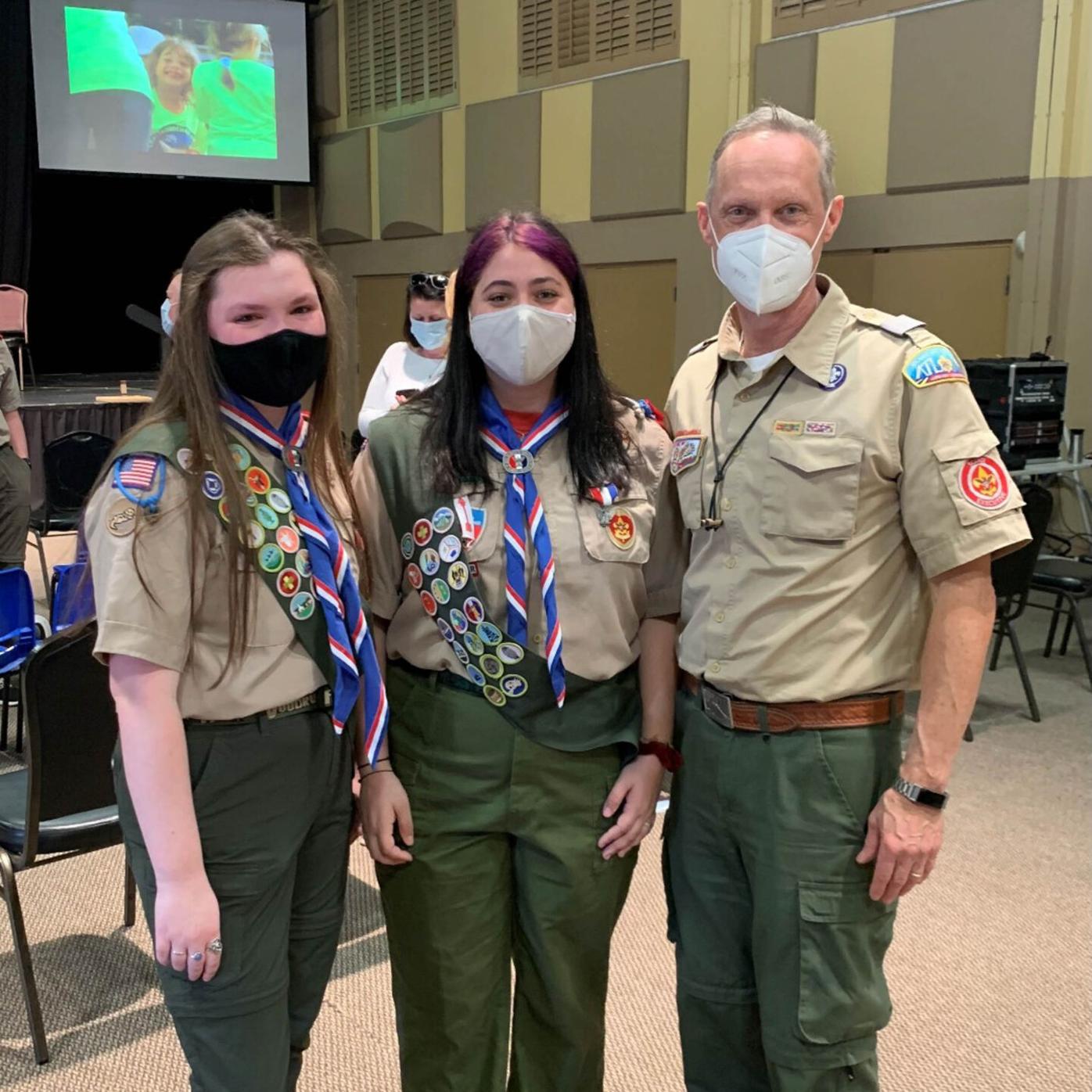 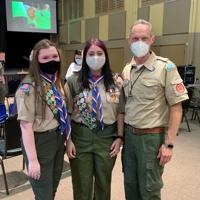 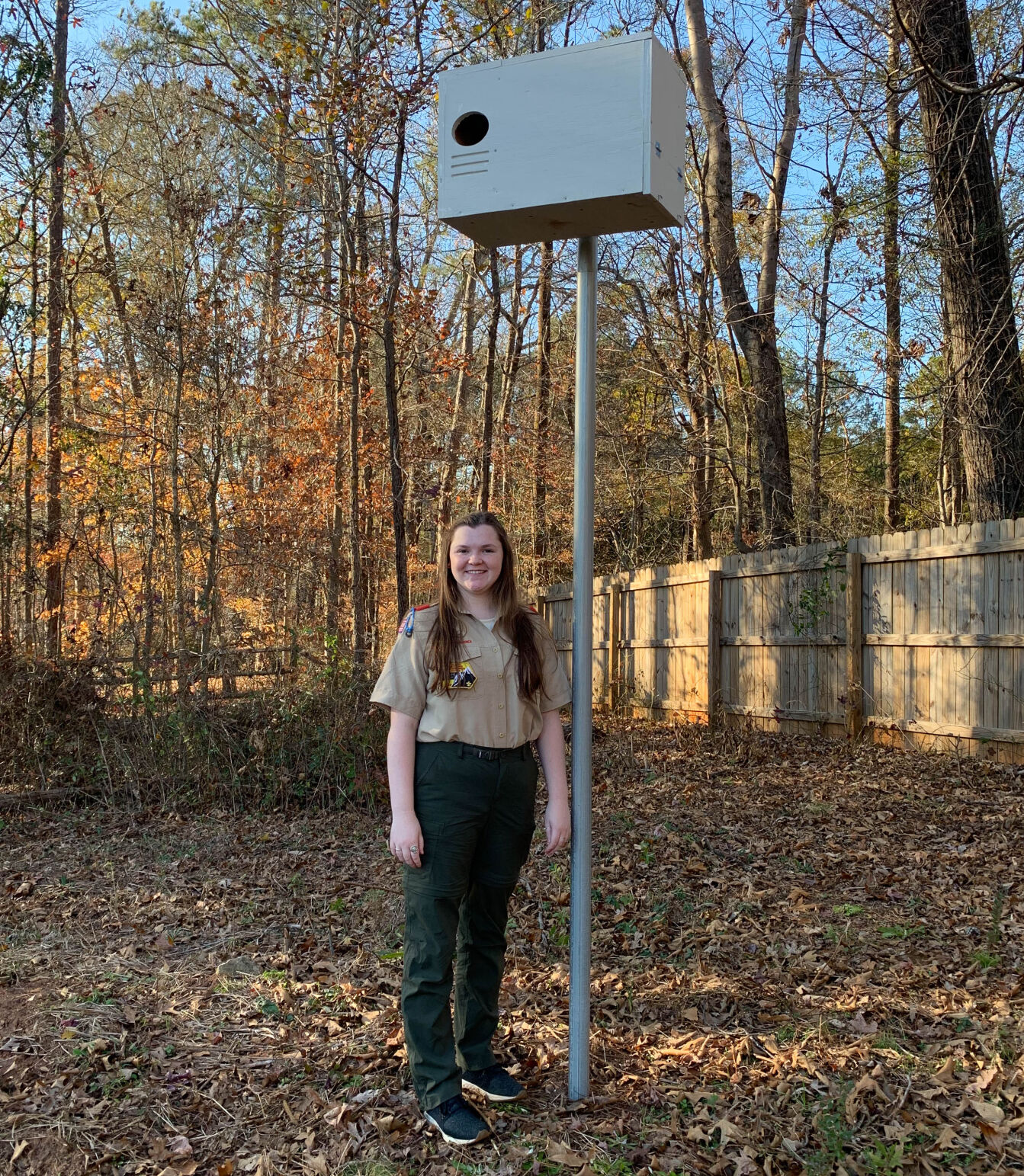 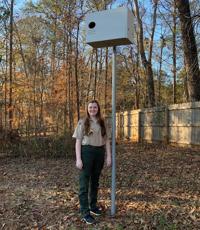 Veronica Roark, 17, is one of two Roswell teens to be among the first group of female scouts. 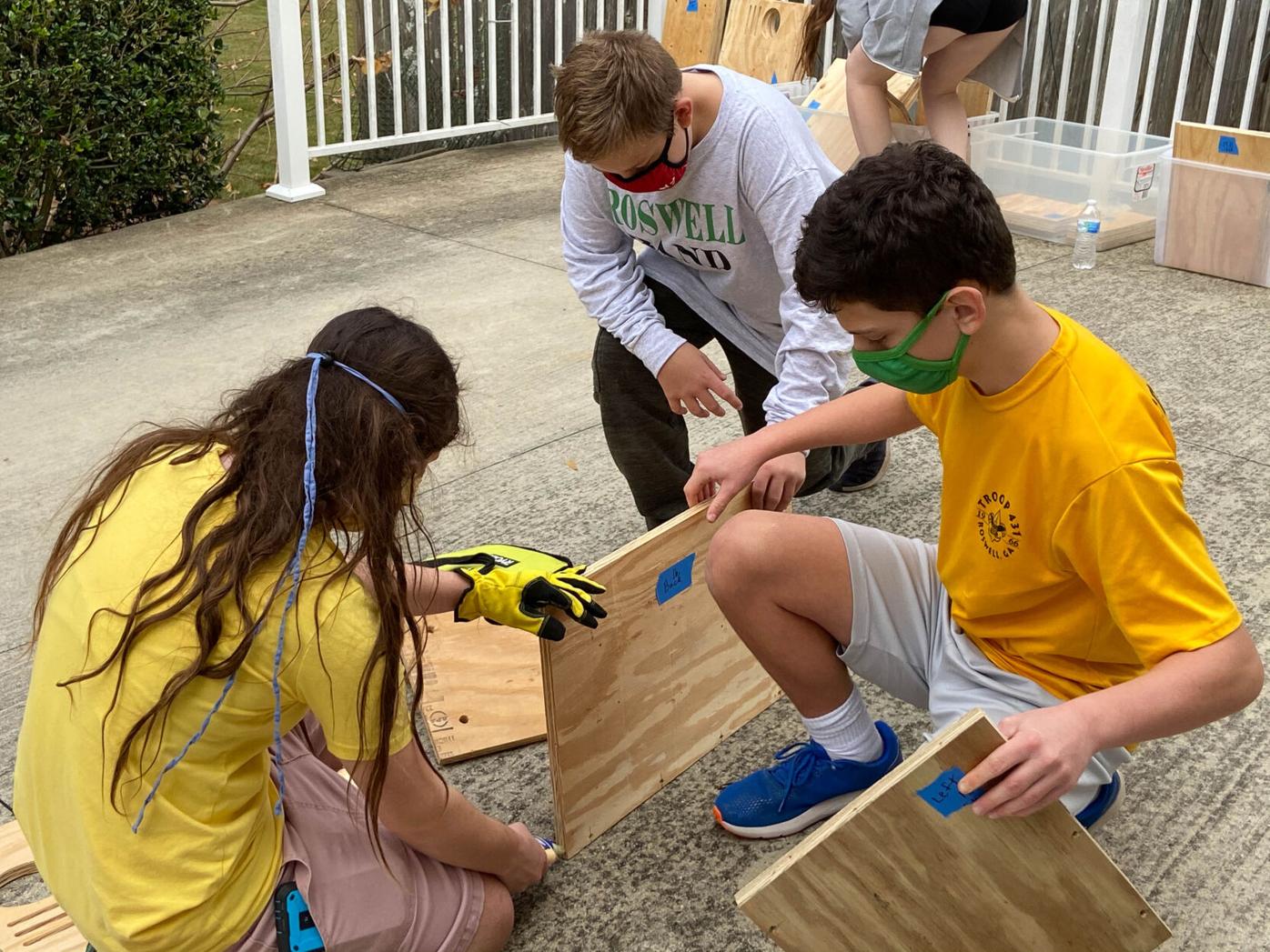 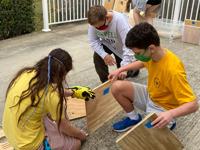 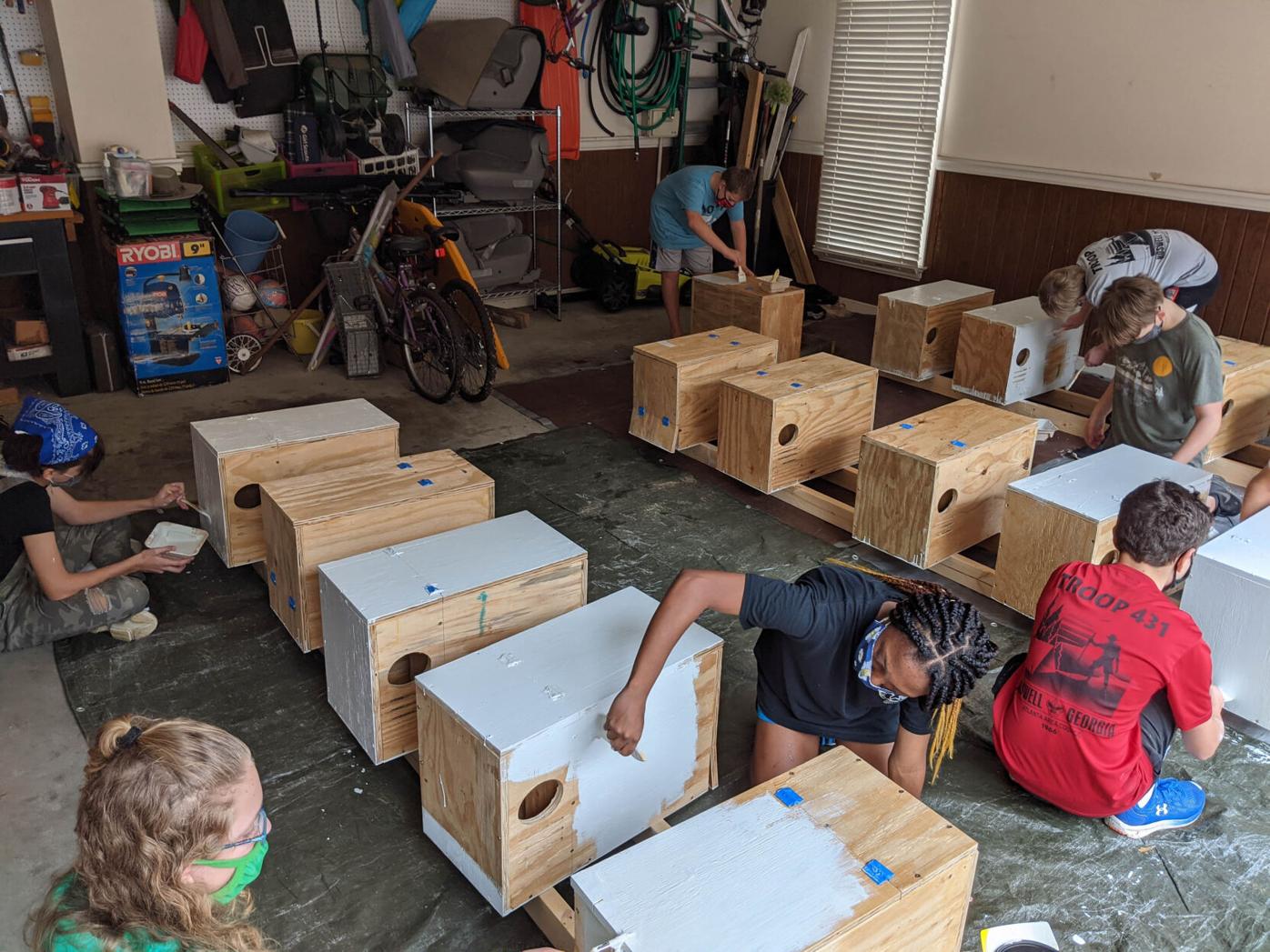 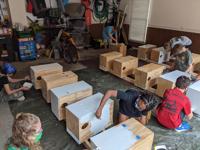 In order to achieve Eagle Scout, scouts must oversee and lead a community service project.

Veronica Roark, 17, is one of two Roswell teens to be among the first group of female scouts.

In order to achieve Eagle Scout, scouts must oversee and lead a community service project.

When Boy Scouts of America announced they would open membership to girls and allow them to become Eagle Scouts beginning Feb. 1, 2018, 17-year-olds Veronica Roark and Zoe Rosenberg signed up for Troop 432 in Roswell almost immediately.

“That is the first day me and Veronica both joined the troop,” Rosenberg said. “That first night we had a lock in with the other six members of the troop. And we all completed the first rank of Scouting — which is scout — on that very first night.”

Both women were involved in Girls Scouts since kindergarten and grew up around scouting thanks to their families. Prior to 2018, only certain scouting programs in Boy Scouts of America were open to girls.

“Once that possibility opened up, it was kind of a no-brainer to me,” Roark said. “I was like, ‘Oh, well of course I’m gonna do this.’ I’ve always been background of these things with my brother, but now I can actually do it myself and get the credit for it.”

Nearly 1,000 young women from across the country took their place in history this February as the first female Eagle Scouts after collectively earning more than 30,000 merit badges and providing an estimated 130,000 hours of community service — even amid a global pandemic.

“This is a powerful moment for these young women, for all Eagle Scouts, and for our nation,” BSA national chair for programs Jenn Hancock said. “People recognize Eagle Scouts as individuals of the highest caliber—and for the first time, that title isn’t limited by gender. This expanded opportunity will empower generations of young people as they see both young men and women earn this rank and become leaders in their communities, in business and our country.”

Only about 6% of Scouts on average attain Scouting’s highest rank, which requires individuals to take on leadership roles within their troop and their community; earn a minimum of 21 merit badges that cover a broad range of topics including first aid and safety, civics, business and the environment; and research, organize and complete a large community service project. The community projects focus on the scouts’ leadership abilities, as well as scout skills.

“It’s all about leadership,” Rosenberg said. “So people come to your project, and you lead them on what to do. It kind of takes all your scout skills and puts it into a project which I think is really cool.”

Rosenberg’s project was repairing and updating a prayer path at her temple, Temple Beth Tikvah, that her brother build for his service project. Rosenberg said the landscaping was eroding and part of the path was missing stairs.

“It’s hard to get up the path for people that are maybe older or have knee issues,” Rosenberg said. “I constructed a new set of stairs on the other side of the path that didn’t have them. I built a retaining wall. I made of concrete blocks to kind of keep the mulch into the in the trail and then I re-mulched the entire trail.”

Roark chose to build and donate 15 barn owls boxes to the Georgia Department of Natural Resources and to a local community farm. Three boxes were donated to the farm to as a way to prevent rodents from eating and destroying the plants. The remaining 12 were distributed throughout the state.

Barn owls are actually a declining population in the state,” Roark said. “And so having these, basically birdhouses, that are specially made for how big a barn owl is. It will help get them attracted back to this area and hopefully raise their populations.”

Once the projects are complete, scouts go before the Board of Review to prove to their scout leaders they rightfully earned the rank of Eagle Scout. For most Eagle Scouts, it takes them around seven years to reach that rank.

Rosenberg and Roark did it in two.

“It was crazy to be up there and have that opportunity that I never thought I’d have in a million years,” Rosenberg said. “It was cool to see all the people in the audience who helped us get there, because there was no way we could do it by ourselves in such short, short amount of time.”

“I got to go to my brother’s ceremony years and years ago, and so getting to have my own was really cool thing,” Roark said. “And becoming an Eagle and having a ton of Eagles in the audience was really cool. “

While the 17-year-olds were among the first females to become Eagle Scouts, they still had female role models in scouting. Roark said many of their scoutmasters and assistant scoutmasters were women.

“It’s not just about being the — first I think it’s about being a trailblazer,” Rosenberg said. “That’s what everyone calls us nowadays. I think just by us being there showing that it can be done and being that trailblazer, a lot of the young girls in our in our troop are much more motivated and want to do it.”

However, women in scouting is still a relatively new concept. By the end of 2018, around 150,000 women joined Boy Scouts of America. Troop 432 currently has around female scouts.

“Unfortunately, there still is a very negative stigma around females in the scouting program,” Rosenberg said. “And I face it with every scouting thing, almost every study I do. There’s a ton of supporters, but there are going to be those people and I think the biggest thing that I hope for the future of this program is to just push through it.”

“I think just being able to push through those stigmas, and you know, showing the world like, ‘We’re not going to stop, because you don’t want to us to be here,’” Rosenberg said. “And just getting that word around that, you know, ‘We can do it, too.’”

I don't understand how girls can be "Boy Scouts". If girls wants to prove they know the same body of knowledge and skills sets as boys who are Boy Scouts/Eagle Scouts, why didn't they simply establish the same body of knowledge and skill sets in the Girl Scouts organization? Why was there a need to force a private organization (Boy Scouts) to change its policies? The only answer must be envy.