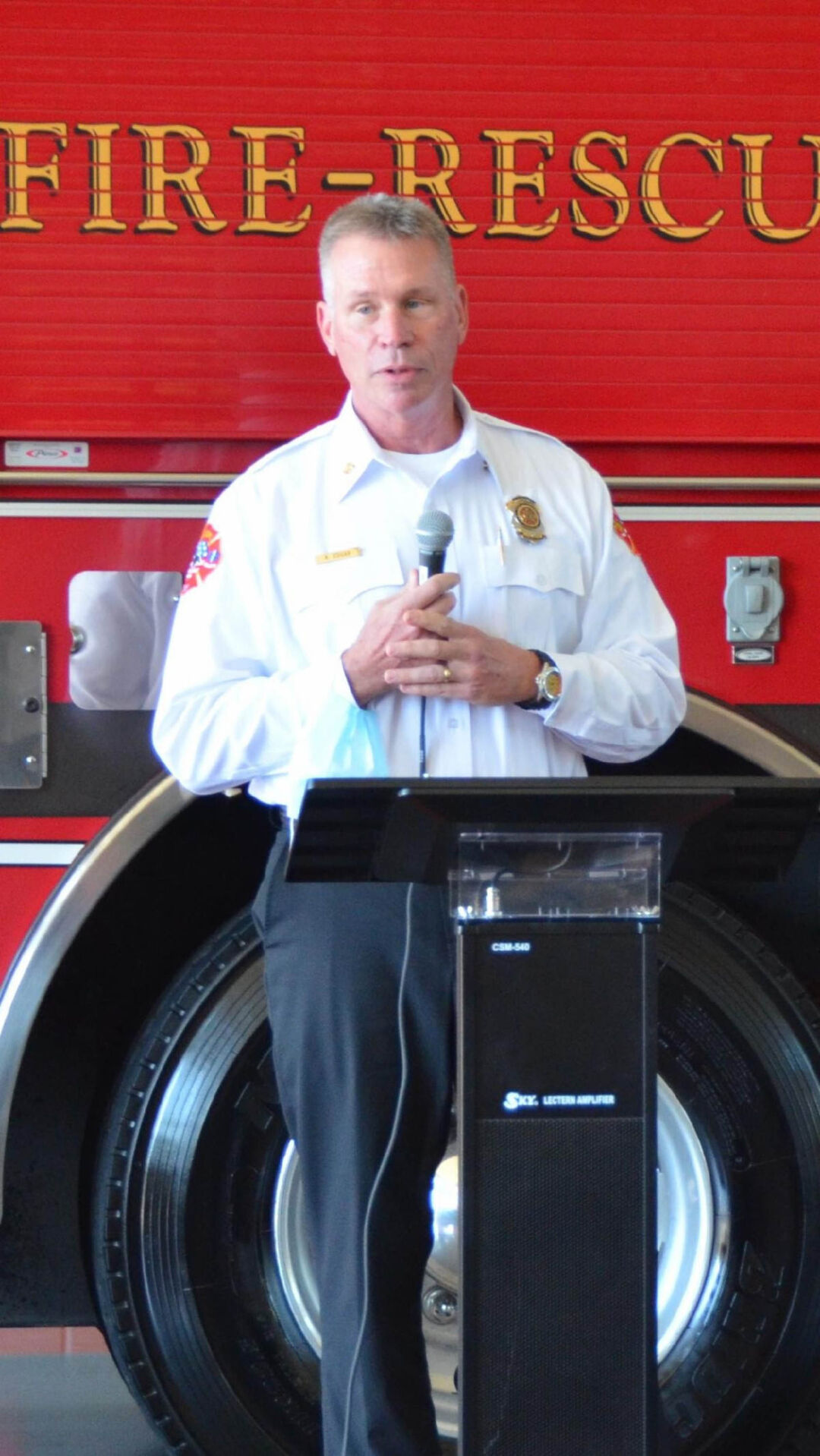 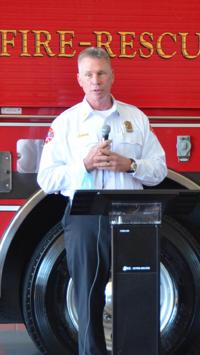 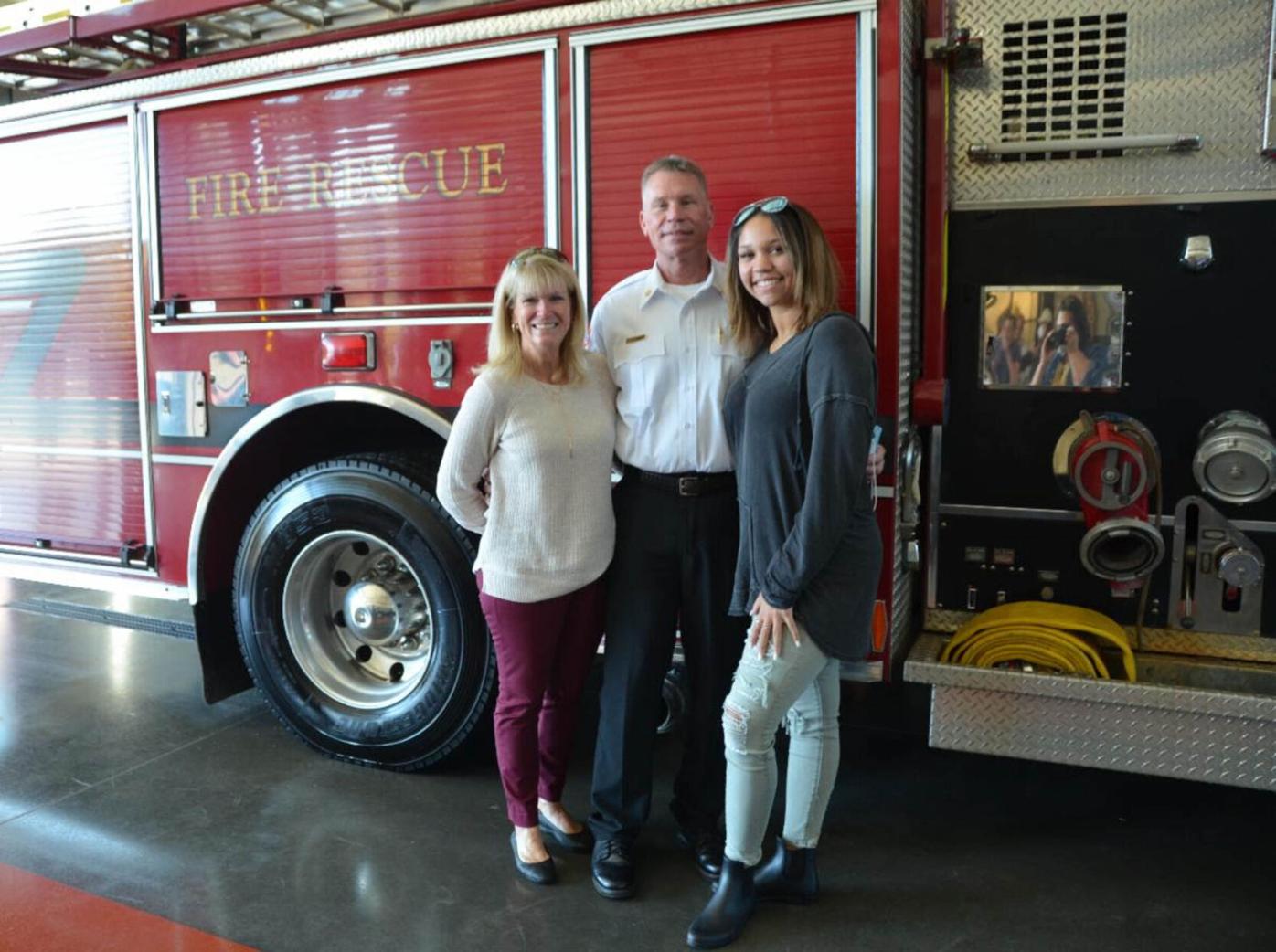 Robert Edgar — the first and only fire chief in Milton’s history — retired from the Milton Fire Department Nov. 6.

Edgar received a special send-off Nov. 6, with many hailing his impressive work ethic, even-keeled demeanor and sincere commitment to his department and the Milton community.

People gathered in the expansive bay of Milton’s brand new Fire Station 44 to celebrate the retirement of a man who built the city’s Fire-Rescue Department from the ground up.

“You recognized what could happen to make the Milton Fire-Rescue Department the best around,” Mayor Pro Tem Peyton Jamison said. “And you, Chief Edgar, made it happen...You are [a] pivotal figure in Milton’s history.”

Edgar worked in the firefighting field in Fort Lauderdale, Florida, for 29 years, rising to the position of deputy chief. In 2008, he and his family headed north to lead Milton’s fledgling fire department.

“Sometimes in life you get decisions right,” Lagerbloom said of hiring Edgar. “And that’s certainly one that I got right.”

At the time, the Milton Fire-Rescue Department was less than two years old with three fire engines, one ladder truck and a regular reliance on neighbors to get by.

Step-by-step, day-after-day, year-after-year, Edgar spearheaded changes that made the Department stronger and better. They ranged from purchasing new equipment, setting up a special training facility behind Fire Station 43, developing an extensive employee wellness program, and supporting community outreach efforts like a CERT program. His most lasting achievement may be the building — in close partnership with City Architect Bob Buscemi — of Fire Station 44 and, next year, the rebuilding of Fire Station 42 off Thompson Road.

Friday’s ceremony included remarks from a range of people, including Police Chief Rich Austin lauded Edgar for forging a terrific, effective partnership from day one and City Manager Steve Krokoff credited Edgar with teaching him important things about leadership.

Head of the Milton First Responders Foundation Brian Dolan spoke for many citizens in extolling Edgar for fostering a good culture, committing fully to the job, building community, showing he cared and exhibiting courage. Milton firefighter Chris Seay also presented Edgar with a Crazy Clown Fire Brigade toy, circa 1983, to enjoy in retirement.

Edgar’s wife, Suzanne, talked about her husband’s early days as a firefighter in Florida, raising two children, and their leap north to Milton. After so many nights of him on duty, Suzanne Edgar said she looked forward to having Robert home with her everyday after they resettle in South Florida.

“Our boat is sitting on a dock in Fort Lauderdale waiting for its captain,” she said.

Before he could hit the Atlantic Ocean, though, Milton firefighters made sure Edgar had several gifts to help remember his time in Milton. These included two unique fire-themed wall hangings, his Fire Department helmet, a special Yeti fish tackle box, a Bass Pro Shops gift card and a framed rendering of Fire Station 44 signed by Milton firefighters.

When he finally took the microphone, Chief Edgar stressed how others had helped drive the Milton Fire-Rescue Department’s success. His singled out the Mayor and City Council, neighboring fire departments (with several chiefs from nearby communities in attendance Friday), City staff, and especially the men and women of Milton’s Fire-Rescue Department.

“I was just there keeping the boat straight, trying not to hit anything,” Edgar said. “The dedication of the firefighters of this department is amazing... You made my job easy.”