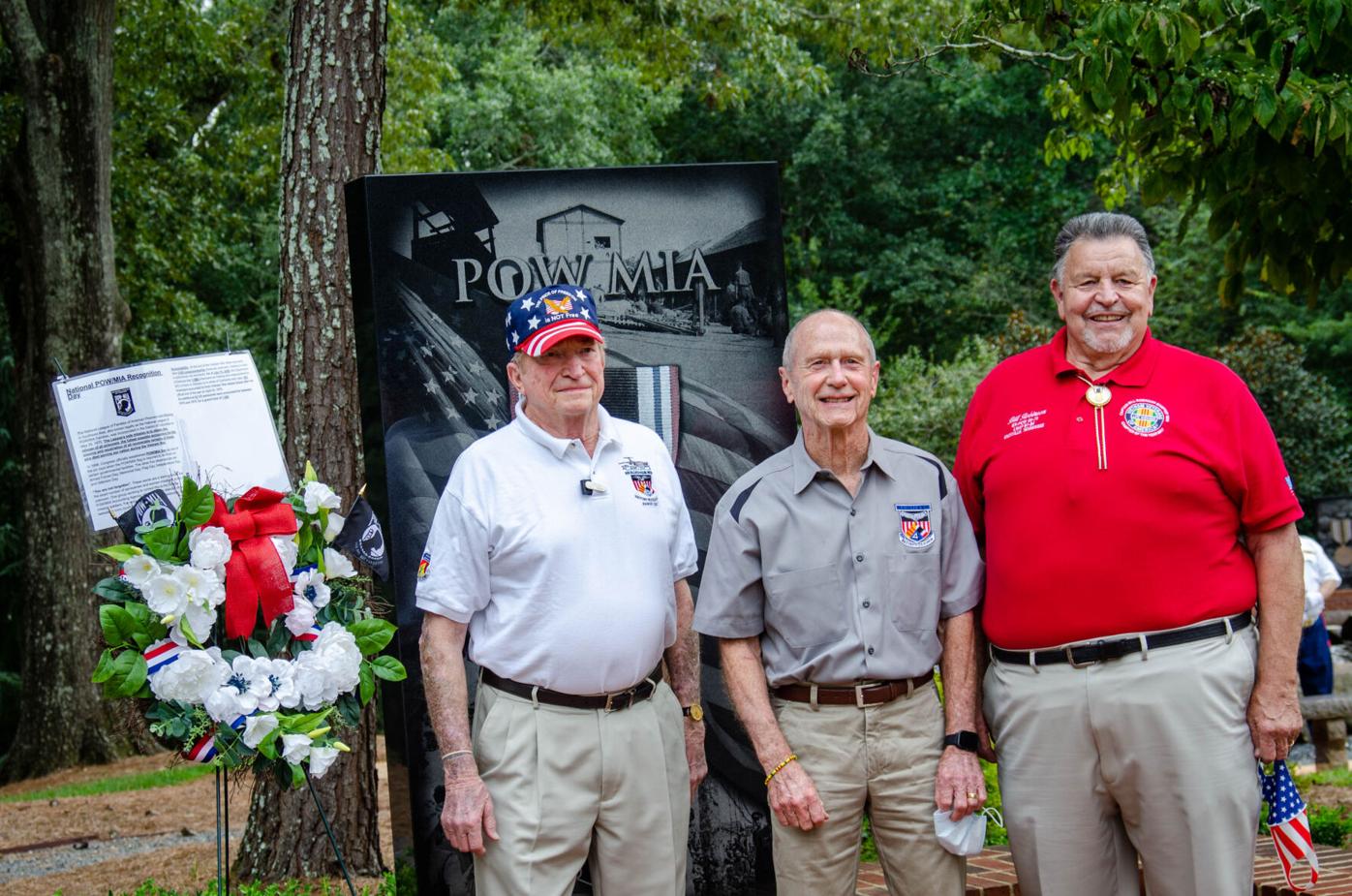 (From left to right) Prisoners of War veterans Wayne Waddell, Ron Mastin and Bill Robinson placed a wreath in front of the POW/MIA memorial in Johns Creek. 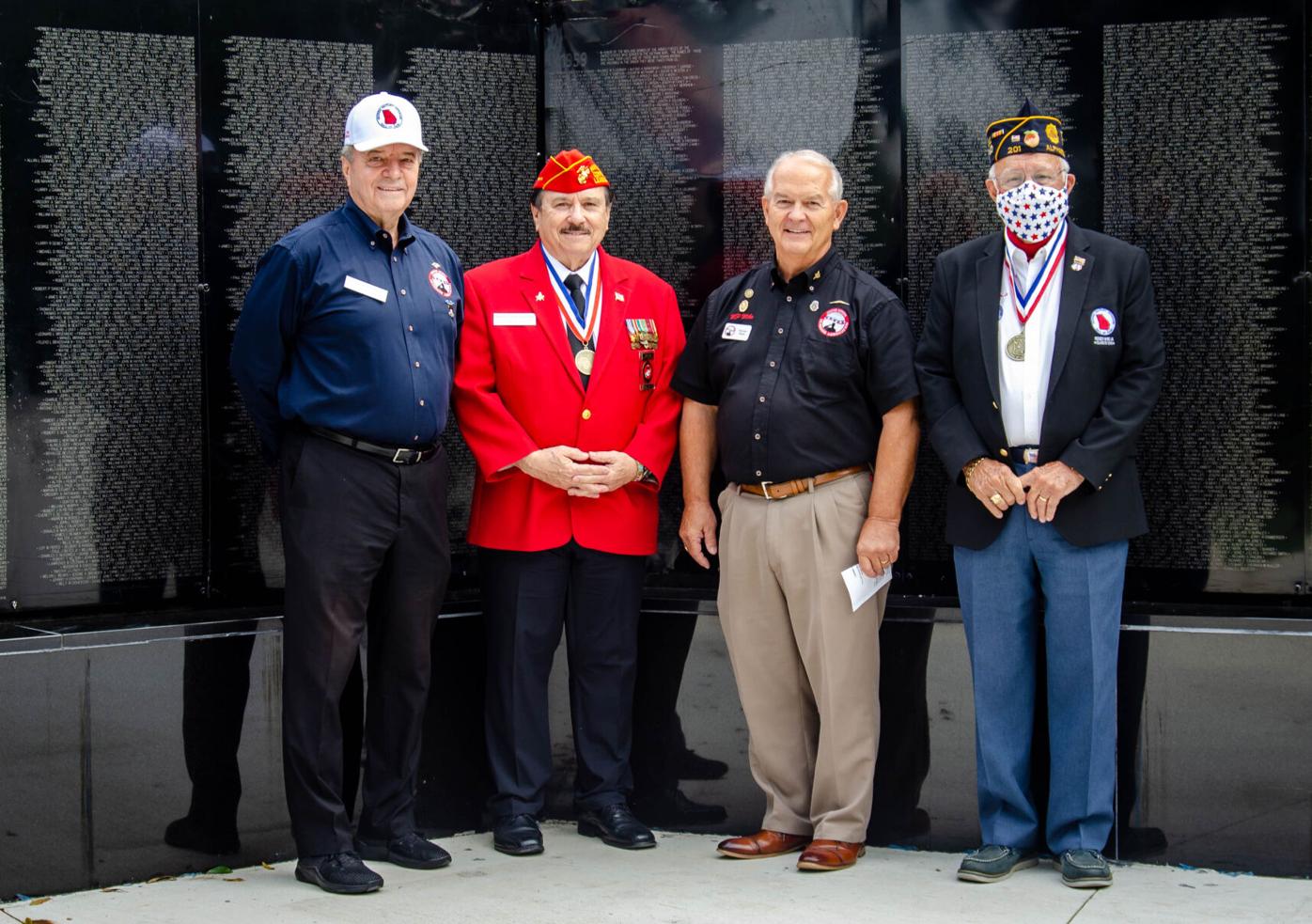 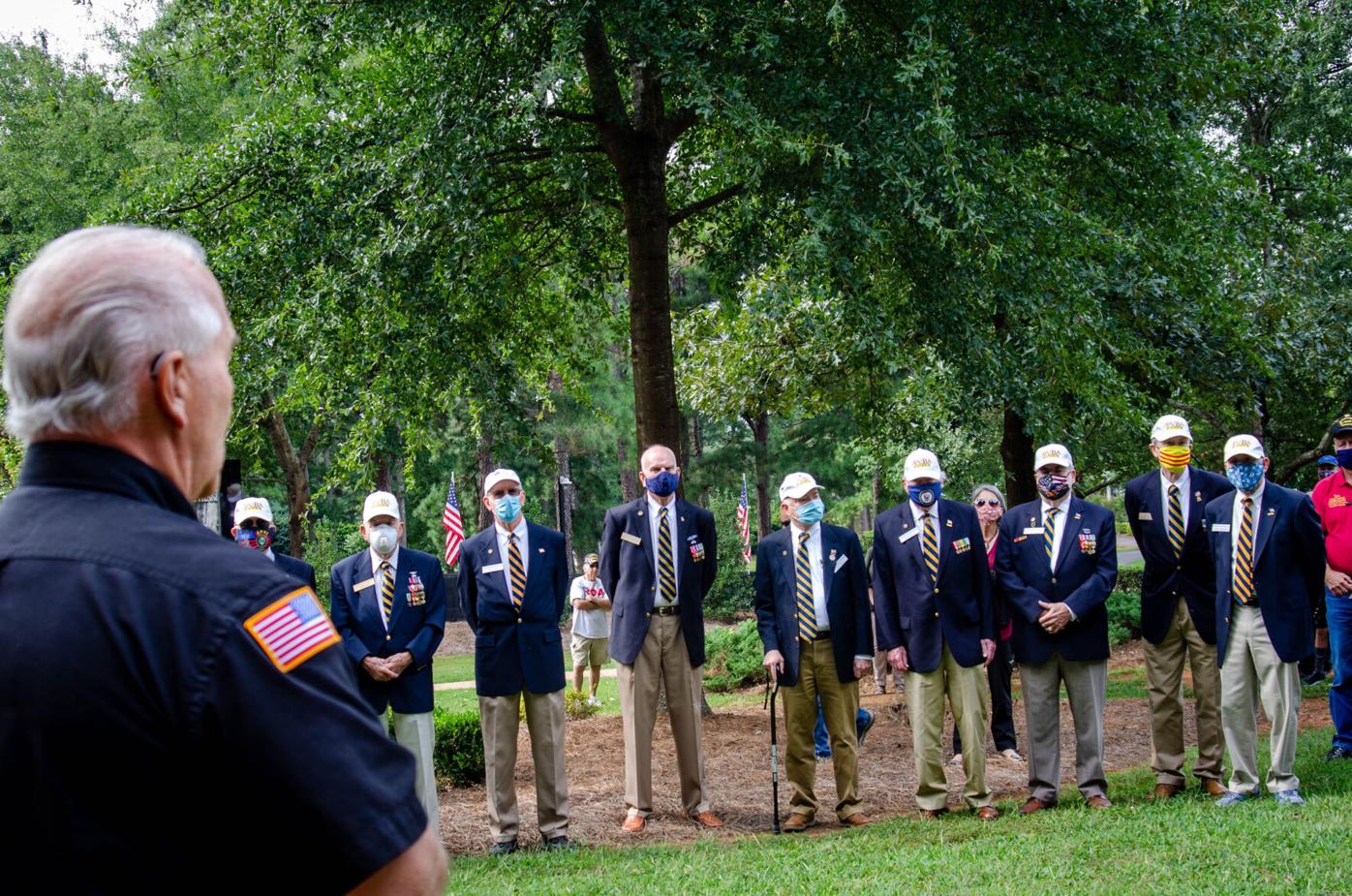 Veterans from north Fulton and surrounding areas listen to Ltc. Michael Mizell speak. Mizell is the executive vice president of The Birdwell Foundation, an organization dedicated to helping veterans recover from PTSD. 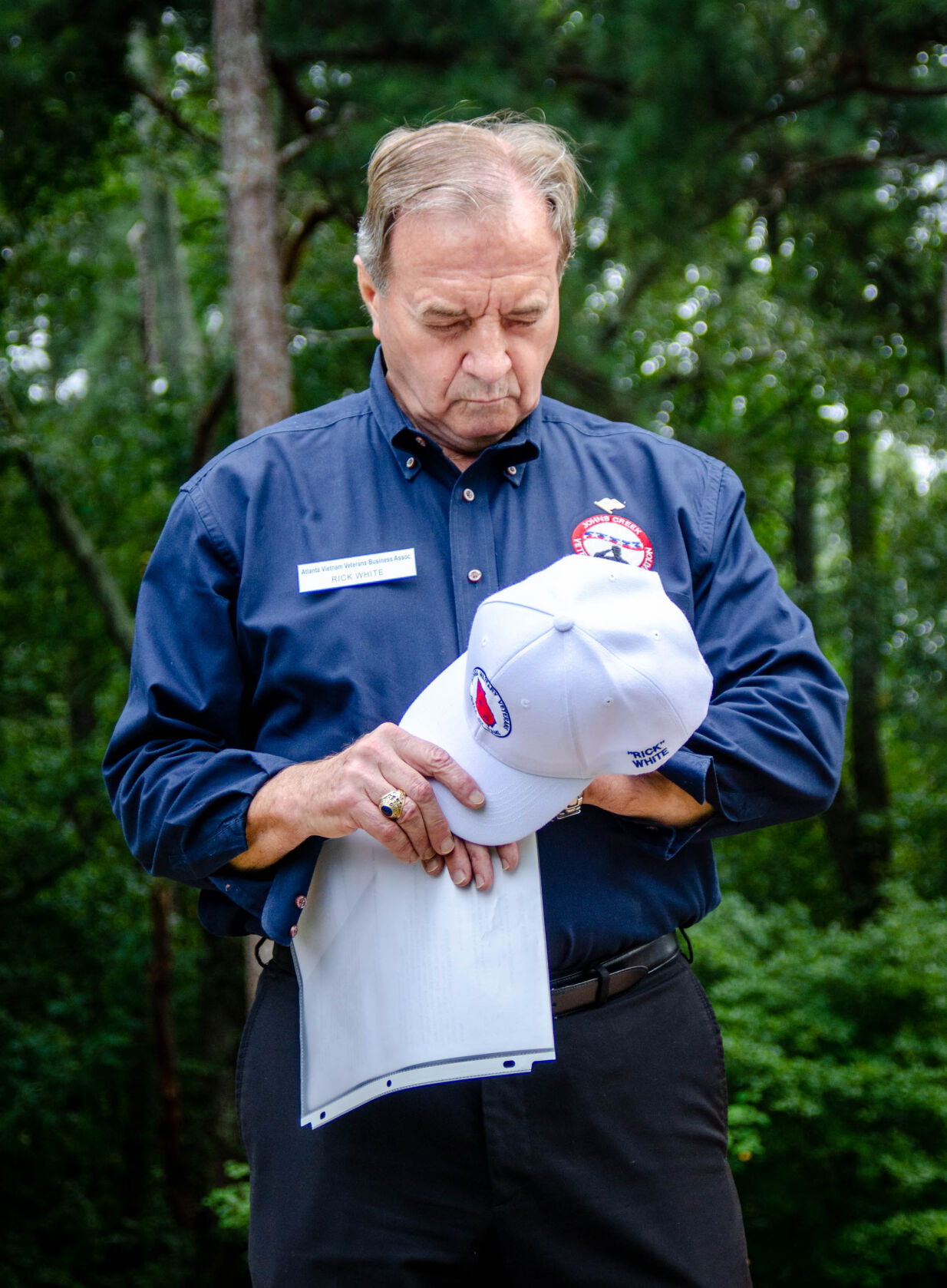 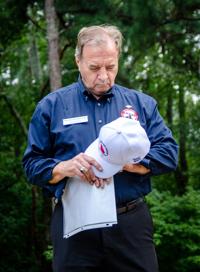 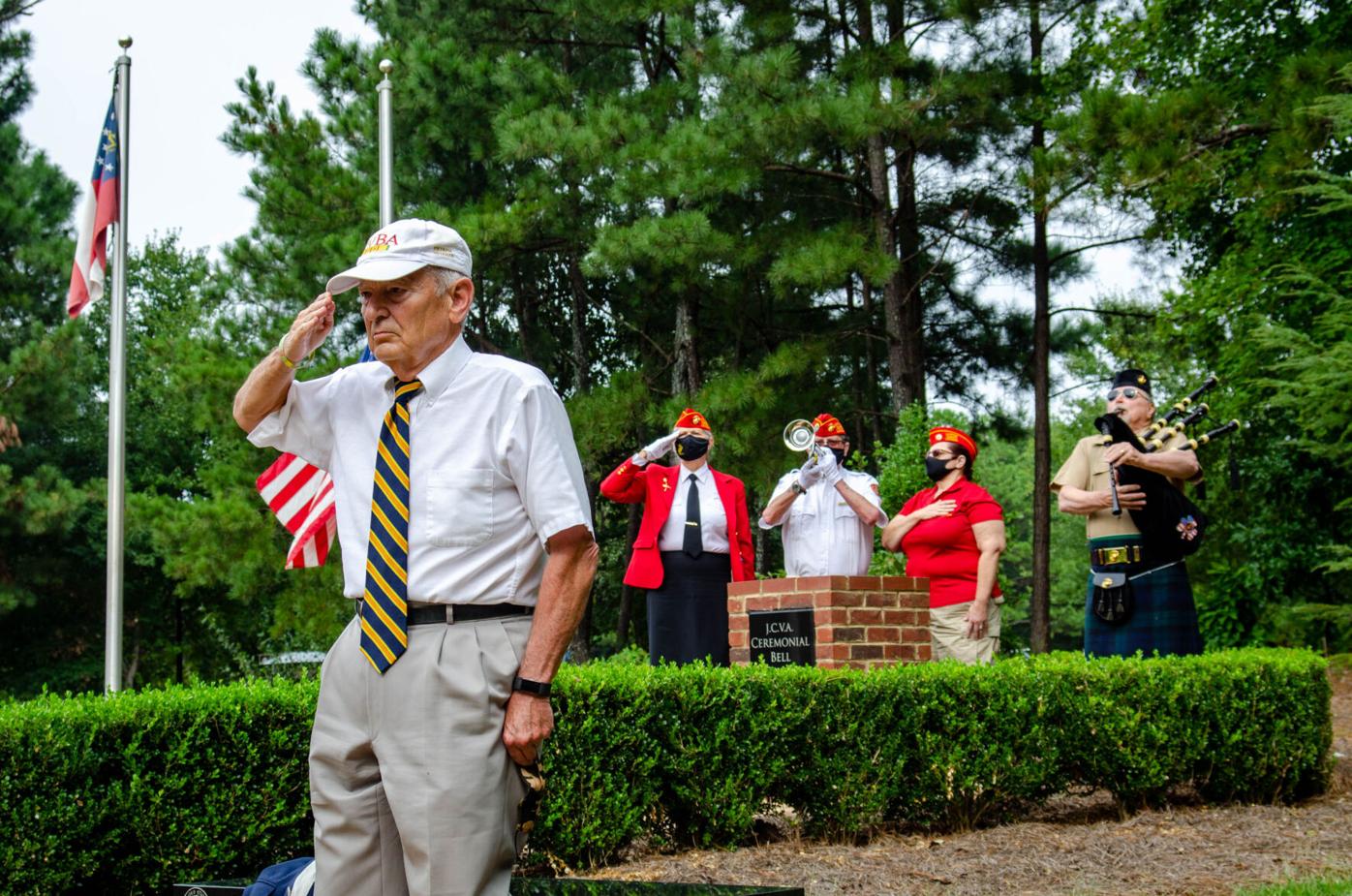 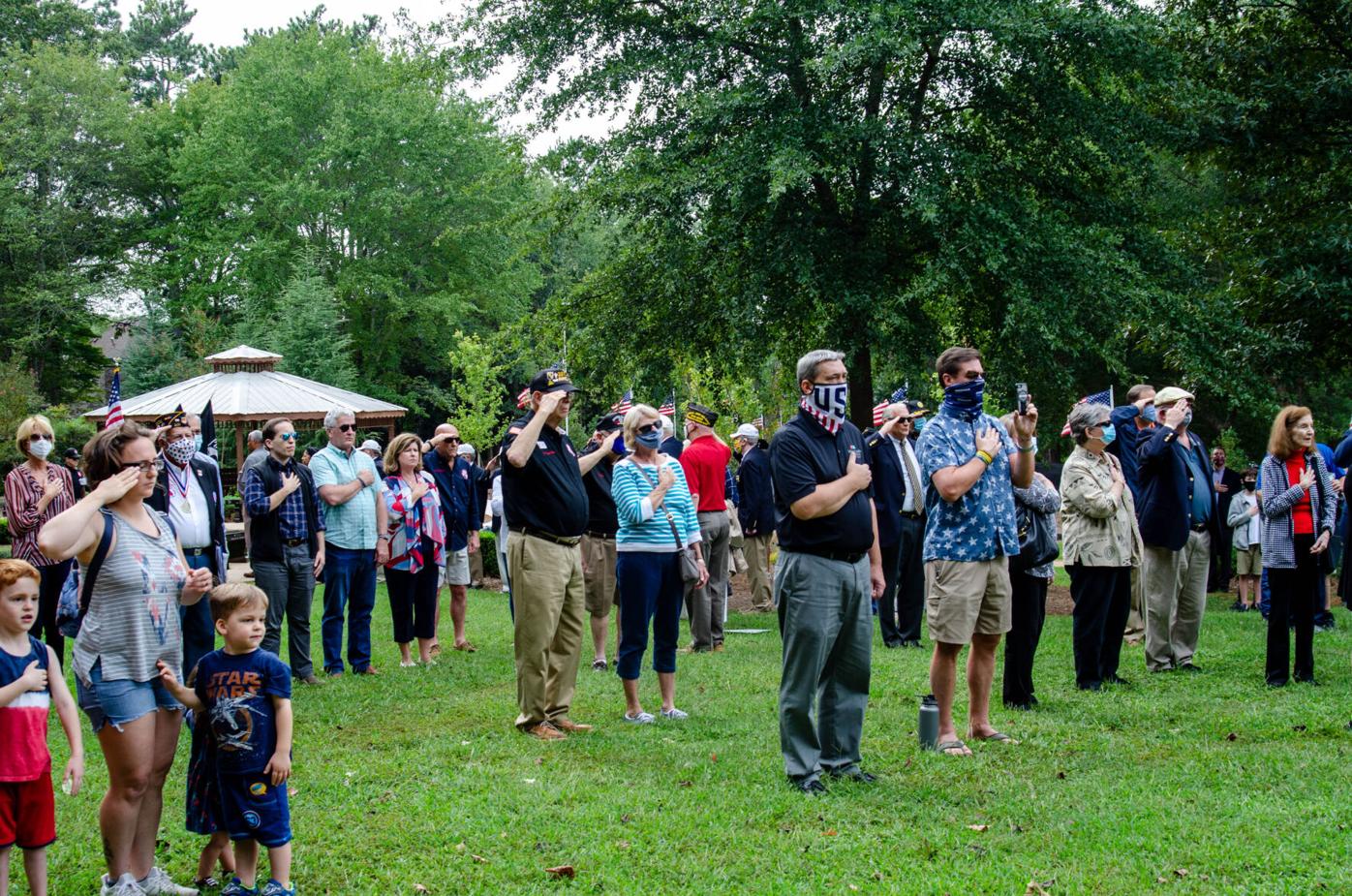 Members of the crowd salute as TAPS is played Sept. 19. 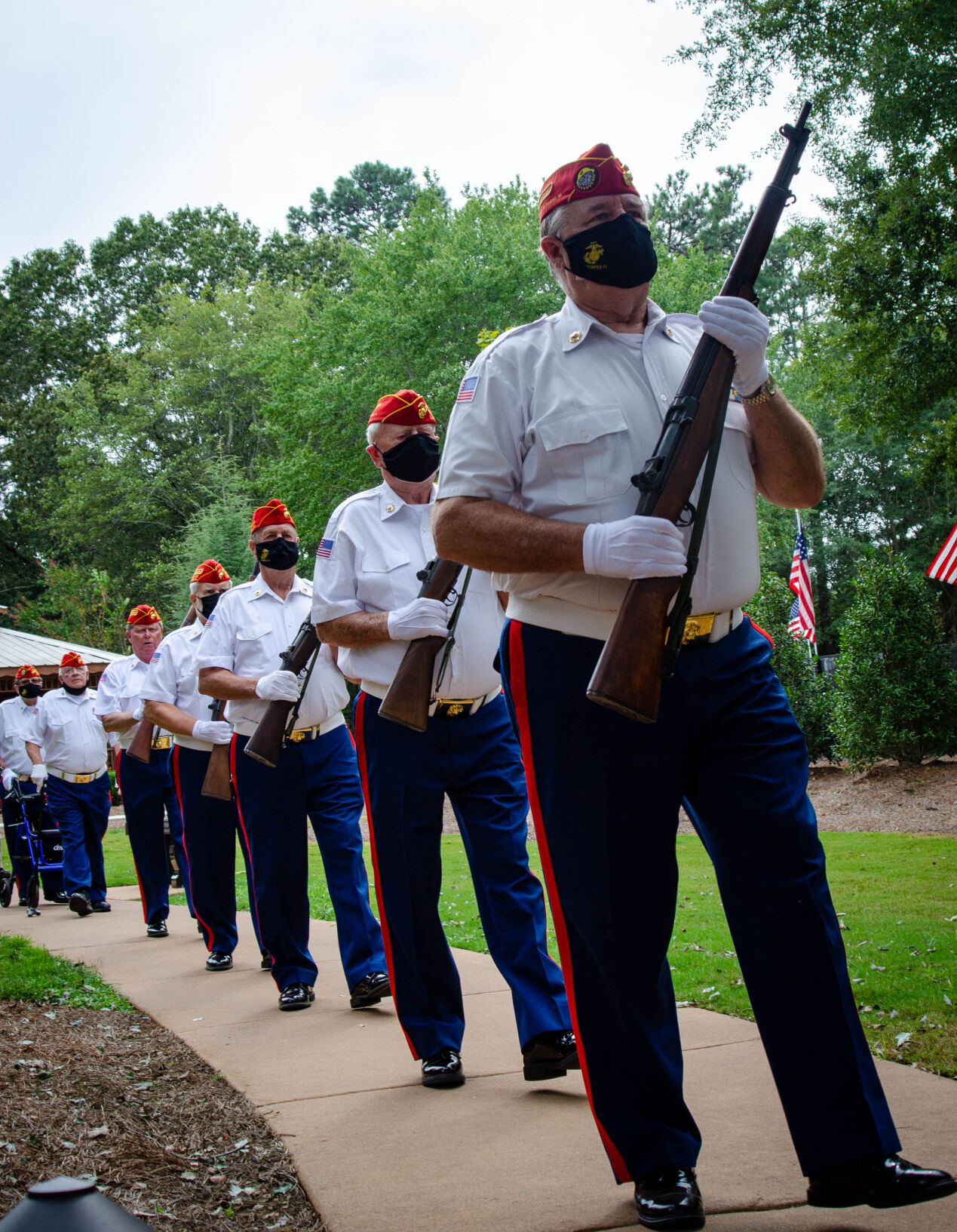 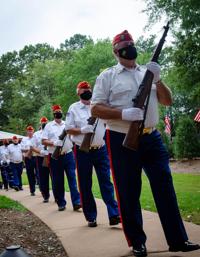 The Marine Corps League Rifle Team leads the way to the amphitheater where the POWs prepare to speak about their time as prisoners. 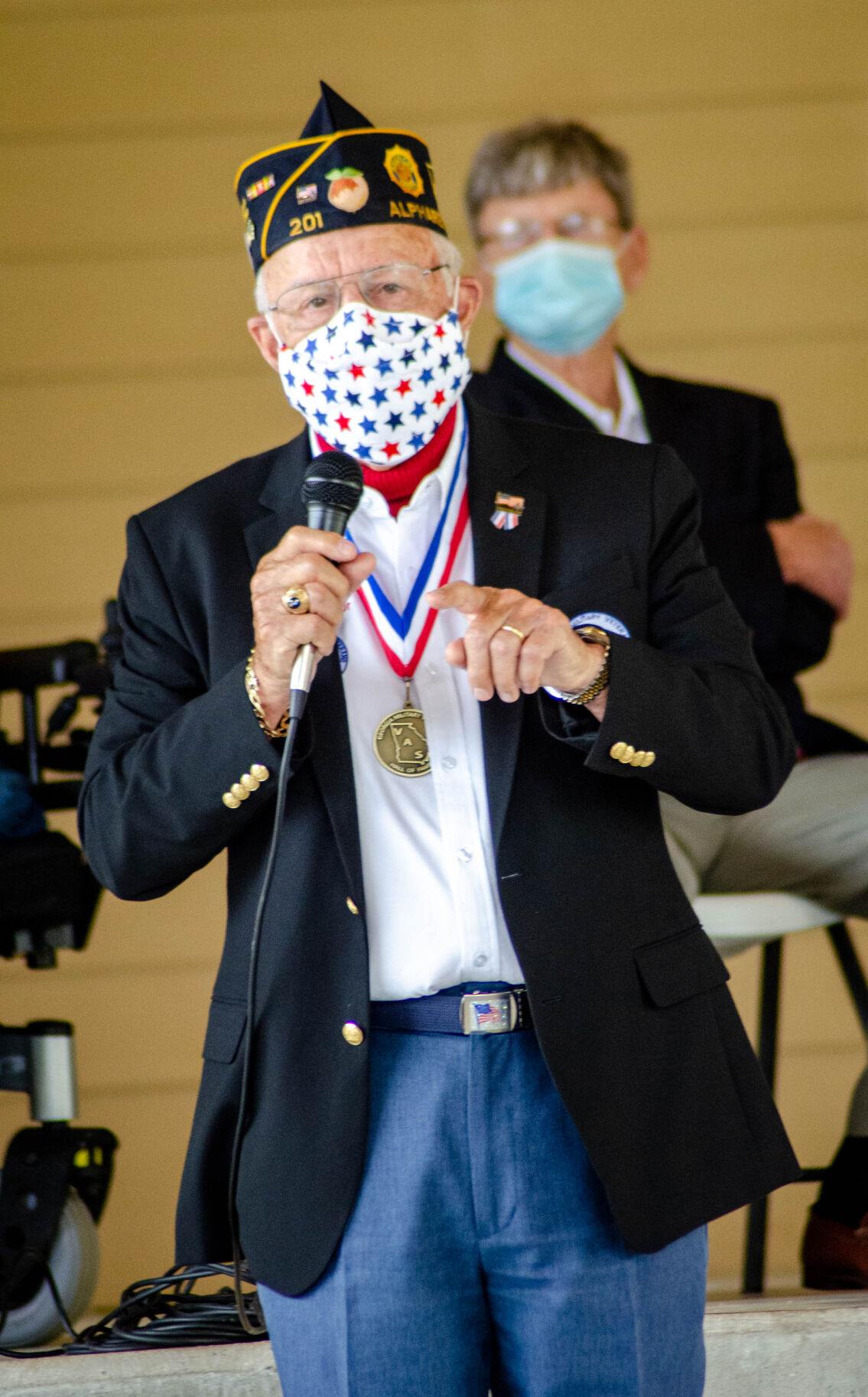 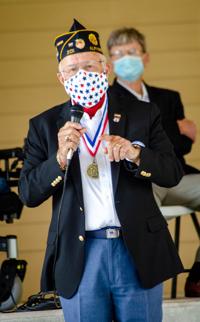 (Left to right) POW Vietnam veterans Kevin Cheney, Wayne Waddell, Bill Robinson and Ron Mastin spoke to a crowd about their experiences as prisoners of war. 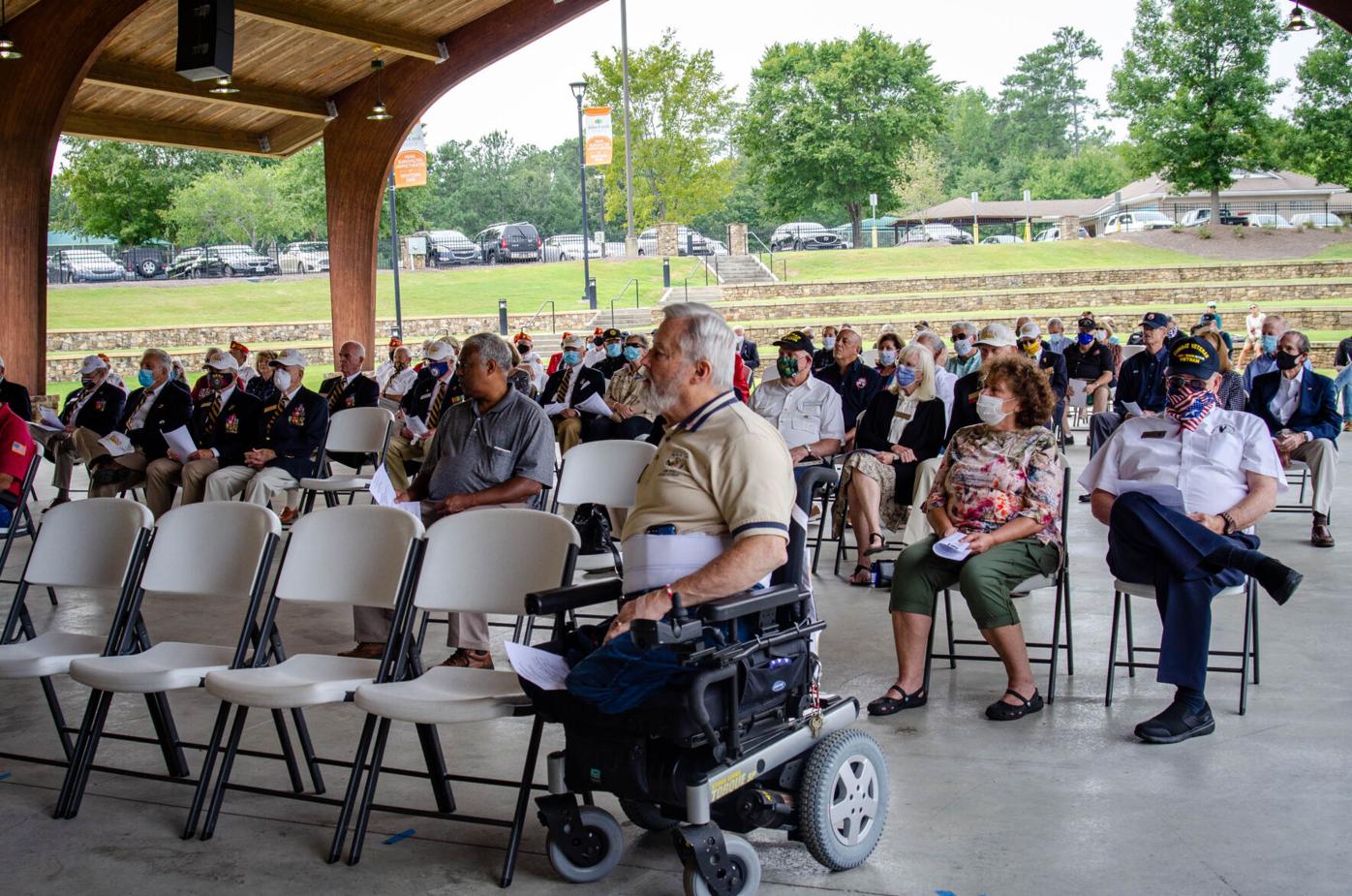 (From left to right) Prisoners of War veterans Wayne Waddell, Ron Mastin and Bill Robinson placed a wreath in front of the POW/MIA memorial in Johns Creek.

Veterans from north Fulton and surrounding areas listen to Ltc. Michael Mizell speak. Mizell is the executive vice president of The Birdwell Foundation, an organization dedicated to helping veterans recover from PTSD.

Members of the crowd salute as TAPS is played Sept. 19.

The Marine Corps League Rifle Team leads the way to the amphitheater where the POWs prepare to speak about their time as prisoners.

(Left to right) POW Vietnam veterans Kevin Cheney, Wayne Waddell, Bill Robinson and Ron Mastin spoke to a crowd about their experiences as prisoners of war.

Fifty-five years ago, almost to the day, Robinson was taken captive after his aircraft was shot down over Vietnam. A simple event, he says, that changed his life forever.

After his plane plummeted to the jungle floor, Robinson and his team had to get as far away from plane as possible. As they put distance between themselves and the aircraft, voices from the darkness of the jungle were getting louder and louder and louder.

“We were looking at 150 Vietnamese with everything from machine guns to machetes,” Robinson said. “My pilot, my captain at the time, Tom Curtis, looked at me and said, ‘Live to fight another day.’”

Robinson said they were taken into captivity and put on display for days, until one day, he was bound, blindfolded and led into the early morning.

“They knelt me down in front of a freshly dug grave,” Robinson said. “And I honestly thought that day, my life was over. I said all the proper prayers that I needed to say at that time and could see from the shadows, behind me two guys standing there with their weapons pointed at me...I was just counting the breaths I could take until the final one.”

His captors spoke to each other in Vietnamese, put their weapons down and took him away. Robinson said it was that day he knew he was going to survive this. He was taken to a prison camp, where he spent eight Thanksgivings, eight Christmases and eight New Years in captivity.

“We survived on four faiths — faith in ourselves that we had the tools to get the job done, faith in each other that we’d stand shoulder to shoulder and eventually return home with honor, faith in our country that they would not abandon us in difficult circumstances, but most of all, faith in our God that he would see us through,” Robinson.

When Robinson was finally released, someone asked a friend of his to describe freedom, to which his friend replied, “Doors with inside knobs.”

Veteran Kevin Cheney was shot down and captured July 1, 1972. Cheney was interrogated for several days, then placed in solitary confinement. When Cheney was moved out of solitary, he was moved to a group cell.

In his nine months as a prisoner, Cheney said his best moment was communicating with an older colonel who had been shot down years prior.

Before Cheney deployed, he visited with the colonel’s family. The colonel’s wife had a photo from the last day he saw her still on their mantle.

“The guy was really just startled,” he said. “’I said sir, I’ve been to your house on the mantle is that picture of you and her in that dress.’ The guys in the room just lost it.”

Kansas-born veteran Ron Mastin’s aircraft crashed in the Vietnam jungle, where he spent five years and eight months as a prisoner of war. The plane began loosing hydraulic pressure and fuel and began “flying like a rock.” Before long, Mastin said he was forced to land. The next day, villagers armed with rifles surrounded Mastin and took him.

“The first couple days, first couple weeks, maybe months were the worst times that we had there,” Mastin said. “If you didn’t answer the questions they wanted, if they didn’t like your attitude, they would punish you.”

Mastin said during those punishments, he focused on getting communications, setting goals and rely on his own strength of character. Setting goals allowed him to continue to refuse Vietnamese orders for as long as he could. The prisoners developed a tapping code to communicate with each other while at the prison.

Mastin said he later heard a story where the Vietnamese came into a cell to grab a prisoner, who purposefully knocked over a bucket of waste. While the prisoners were cleaning up the mess, they tapped out a ‘Happy Birthday’ message to another prisoner.

“Later on, when I’d returned home, I feel like I found out what kept us going,” Mastin said. “The Vietnamese took away all our physical abilities, but they could not touch the spirit we had — the USA spirit in our mind, our hearts and our souls. We knew the life we had in the past. We had dreams about that life in our future.”

Georgia Tech graduate Wayne Waddell was shot down in 1966 in Thailand after dropping a bomb. Waddell was taken captive by Chinese soldiers, who held some of the borders in the area. He was turned over to a North Vietnamese prisoner camp, where he said he learned right away that he was not “as big or tough” as he thought.

“Whatever it took, they were going to break you to understand that it was their prison camp, and you were going to do what they told you to do,” he said. “If you resisted it just made it that more difficult.”

Waddell was placed with a Navy commander for 99 days, during which he said seeing that commander’s determination to live was one of the best things that happened to him there. It gave him the strength to keep his head on straight. Waddell and the commander spent 99 days together, but Waddell was eventually taken to a second prisoner camp. The Navy commander was placed in solitary confinement for 25 months.

At this new camp, a Latino solider the prisoners nicknamed ‘Fidel’, ran a “total submission program.” According to Waddell, ‘Fidel’ would beat soldiers into submission. One prisoner was beaten and given shock treatments until the Vietnamese deemed him insane.

“Laying down your life for a friend was an unwritten motto for all of us,” Waddell said. “They all stood together. I considered us a band of brothers...we were all doing our job over there.”

After spending over six years in captivity, Waddell was rescued in early 1973. As he walked up the ramp of the C141 U.S Air Force plane, he says he could smell the red Georgia clay.

“I knew I was going home,” Waddell said.

To this day, 1,594 Vietnam veterans are still missing in action.