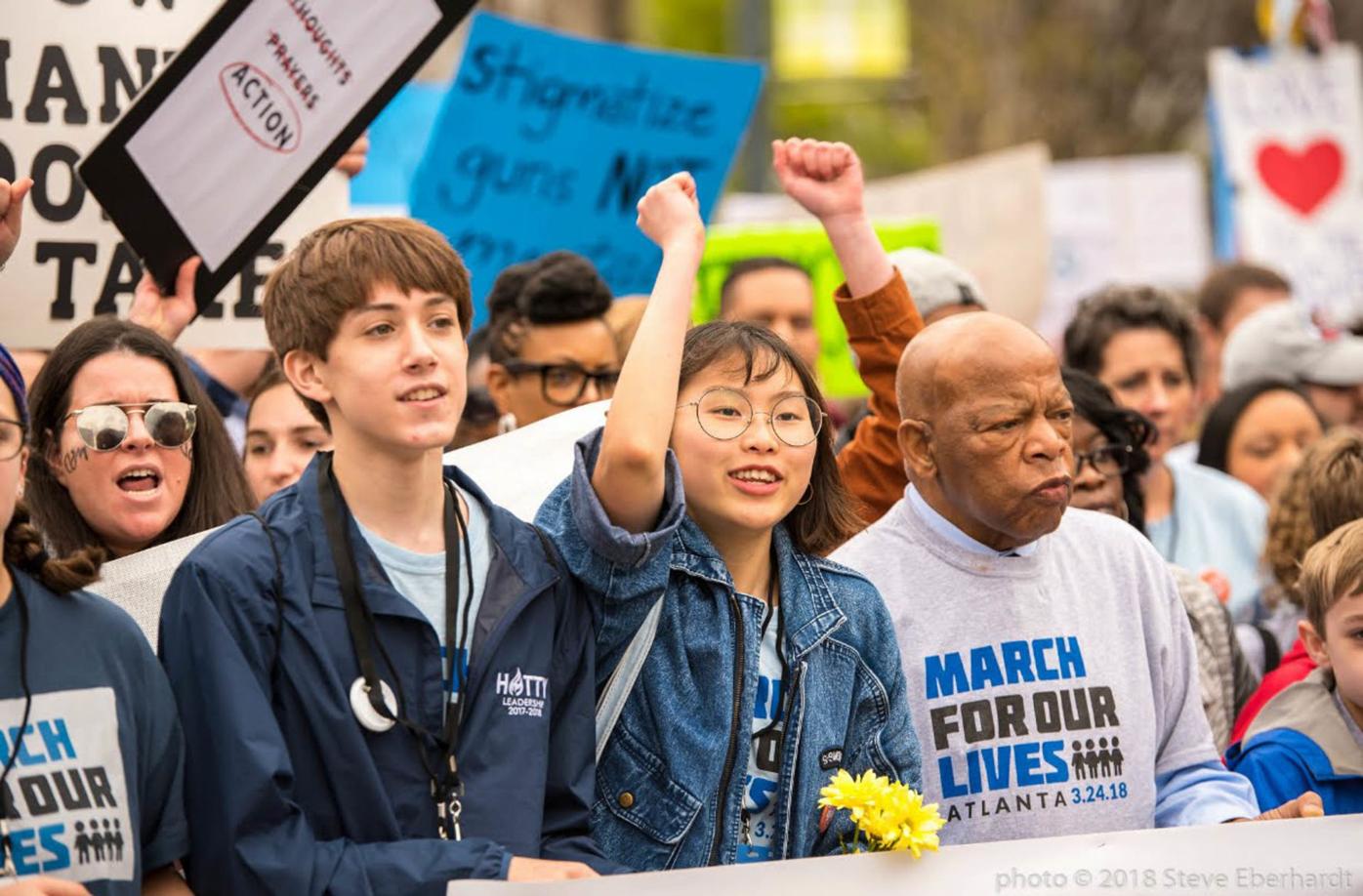 Ethan Asher, left, marches with Kailen Kimand and the late Rep. John Lewis at the Atlanta March For Our Lives protest last March. March for Our Lives is a Peaches for Progress partner. 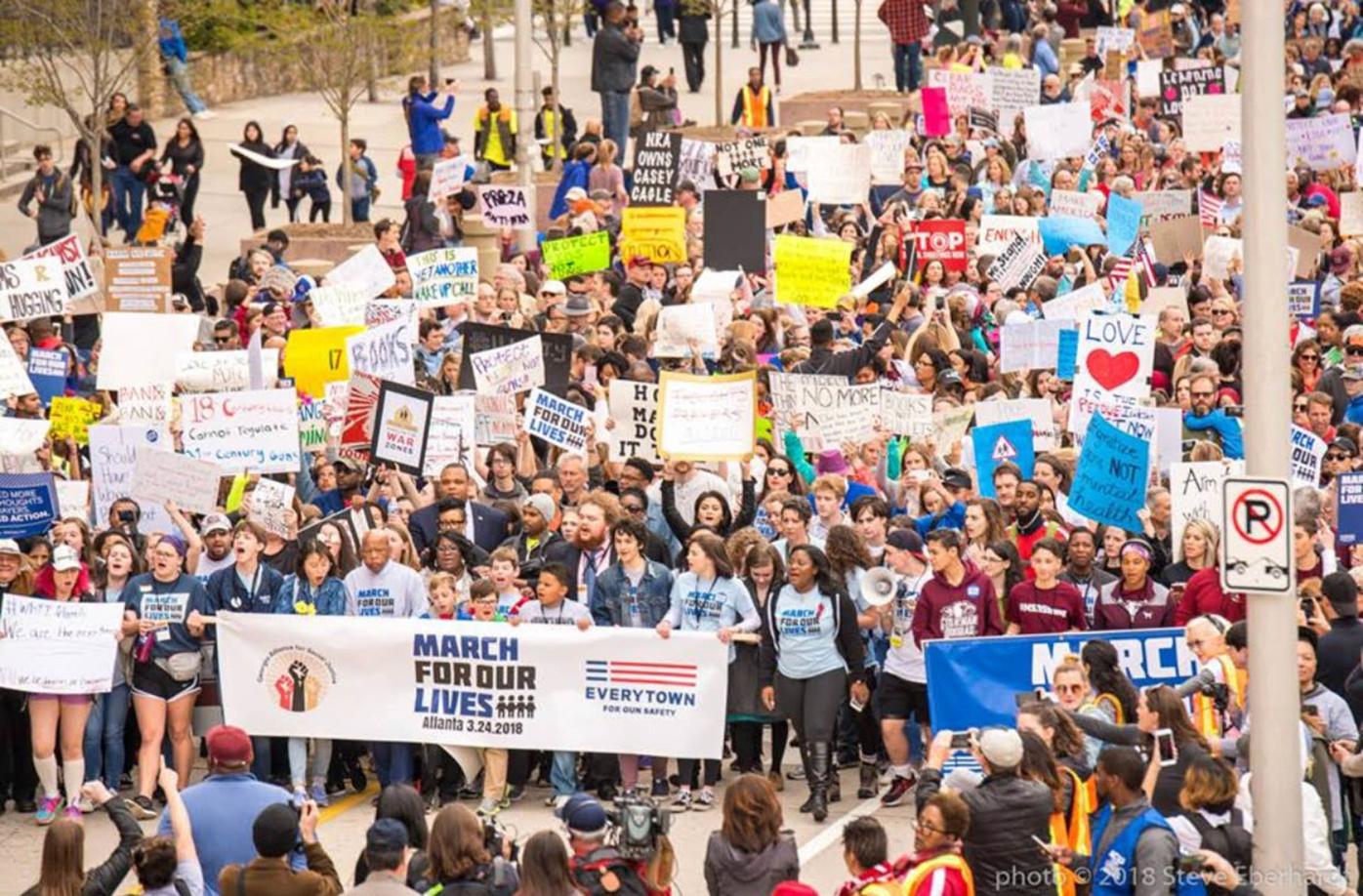 Around 70,000 people marched to protest gun violence, making it one of the largest marches in history.

Ethan Asher, left, marches with Kailen Kimand and the late Rep. John Lewis at the Atlanta March For Our Lives protest last March. March for Our Lives is a Peaches for Progress partner.

Around 70,000 people marched to protest gun violence, making it one of the largest marches in history.

Roswell’s Ethan Asher was recently announced as a recipient of the 2019 Diller Teen Tikkun Olam Awards — an award that recognizes teens for their commitment to social good and volunteer service — for his work with March For Our Lives.

Asher has been making significant strides in the fight for common sense gun legislation through his work with March for Our Lives Georgia. Asher started the Georgia chapter of MFOL as a high school students soon after the Parkland shooting.

On Feb. 14, 2018, former student Nikolas Cruz walked into Stoneman Douglas Marjory High School and killed 14 students and three staff members. A security guard recently testified that Cruz was such a worry to the school, that he was searched daily and not allowed to bring a backpack to school. One of the victims, 14-year-old Alyssa Alhadeff, went to summer camps with his temple friends, and Asher says he was with some of the camp counselors when they found out.

“To experience a loss like that for the first time, really in my lifetime, was so earth shattering,” Asher said. “I was like, ‘I’m angry and I want to do something, because being angry isn’t productive.’ I threw myself into it.”

Asher began his work as a volunteer, but soon became in charge of outreach for MFOL. Asher and other students his age worked to organize Atlanta’s MFOL protest on March 24, 2018, where around 70,000 people attended. Walking in a march he helped coordinate, alongside the King family, Rep. John Lewis and a mass of people to demand change, is an accomplishment Asher says he cherishes.

“It really was incredible, not only just the amount of people there, but the energy that was there,” Asher said.

“I’m not marching door to door to take your guns away,” Asher explained. “I don’t want to...if you’re a law abiding citizen, the second amendment says you have the right to bear arms as part of a well regulated militia. It is so important to have a modern interpretation of that and to look and say there are concrete things we can do to increase safety.”

“We stay away from the words ‘gun control’ because people don’t like that and think, ‘Oh they’re going to take my guns,’” Asher said.

Asher says that his approach to the phrase common sense gun laws is to think of it like a driver’s licences.

“No one argues that the government is coming to take our cars away, why is it different than guns?” Asher said. “Put them under the Consumer Protection Act, raise the age to purchase at 21, look at whether or not someone should be required to have an extra licence to have an assault weapon, universal background checks, extreme risk protection orders, closing the boyfriend loophole.”

According to the Lautenberg Amendment, domestic abusers are not permitted to purchase or posses a firearm; however, the law states that to qualify, a person “has, as an element, the use or attempted use of physical force, or the threatened use of a deadly weapon, committed by a current or former spouse, parent, or guardian of the victim.”

“It also looks like mental health care, like a mental health professional in every public high school in America,” Asher says. “I think when you do talk about (gun laws) you have to think about it in a wholesome way...there is no one right answer.”

Asher says that extremists on both sides are not helpful to the gun law conversation, and that MFOL’s main goal is to keep everyone safe. While working with MFOL, Asher helps lead lobbying efforts, such as encouraging voter registration, writing letters to representatives and speaking with members of congress.

Now in its thirteenth year, the Diller Teen Tikkun Olam Awards have given more than $4 million dollars to 129 Jewish teens who are tackling global issues and creating lasting change through tikkun olam – the vision of Bay Area Philanthropist Helen Diller, the quiet force behind The Helen Diller Family Foundation.

Asher will be attending an awards ceremony honoring the 15 national winners of the $36,000 Diller Teen Award in San Francisco on Aug. 19. While Asher is unsure about where he wants to go to college next year, he says is open to possibilities and knows he will be happy wherever he ends up.

Asher says that getting involved with a chapter and starting being supportive on social media is a great place for people who want to get involved to begin.