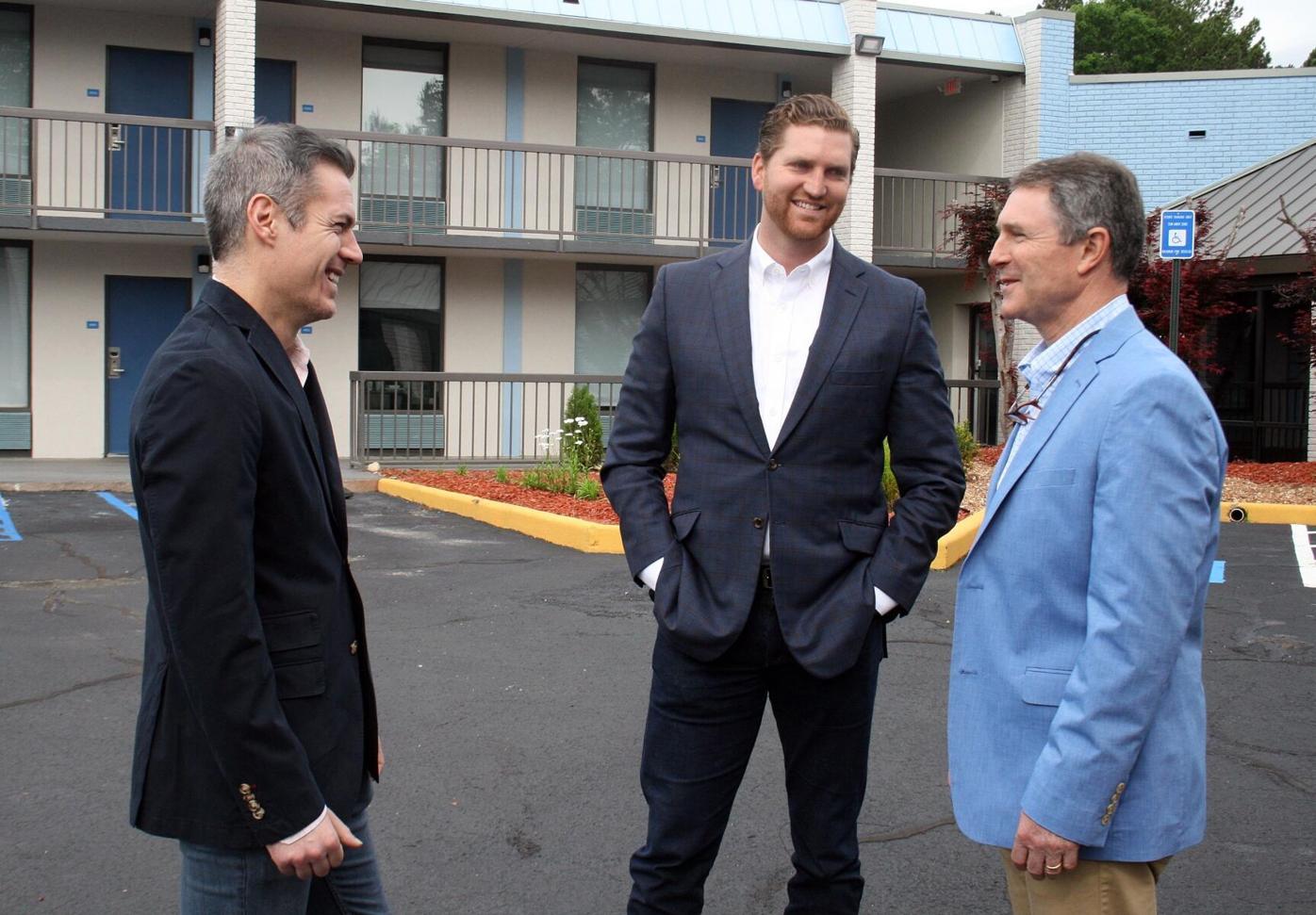 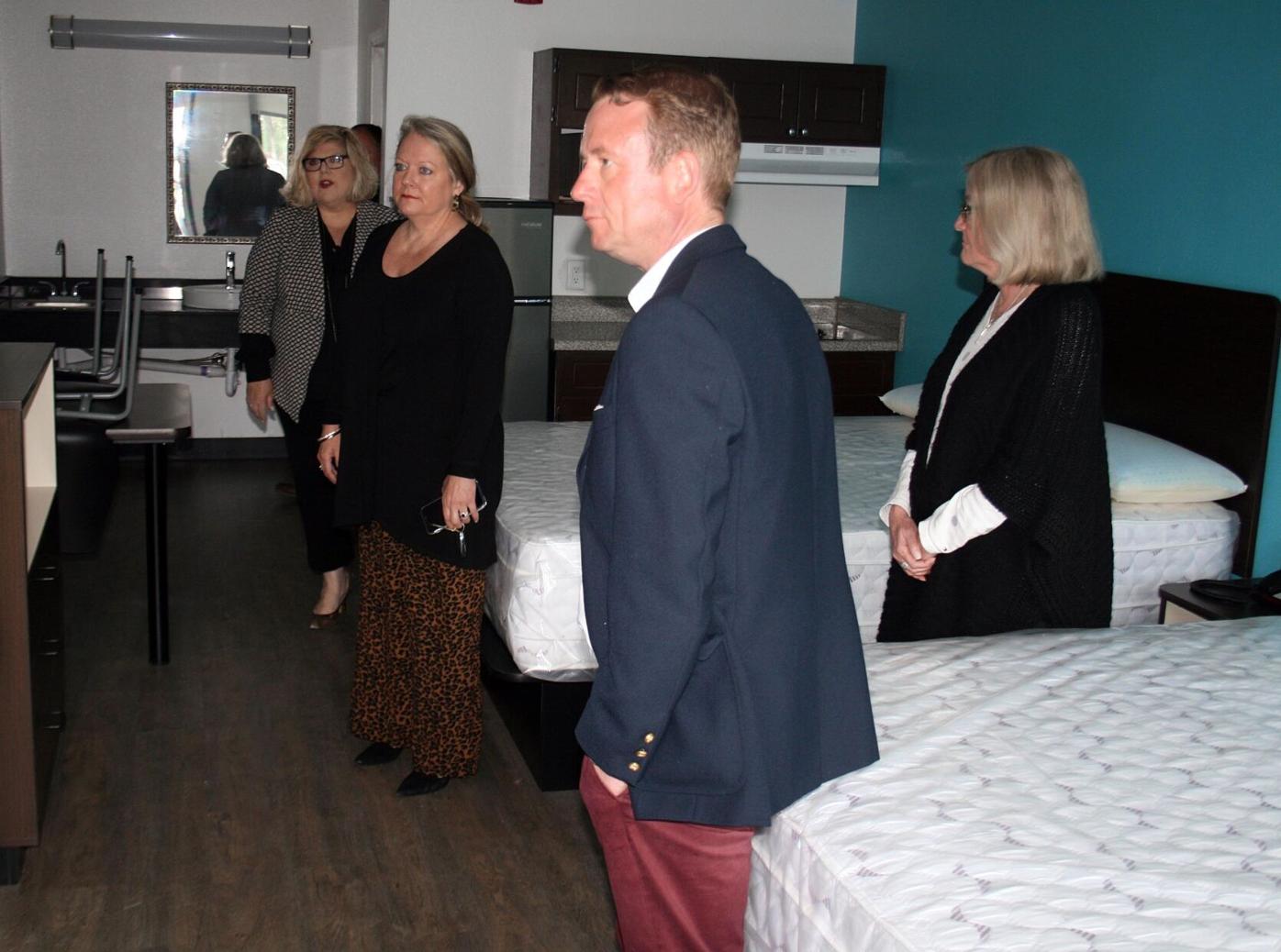 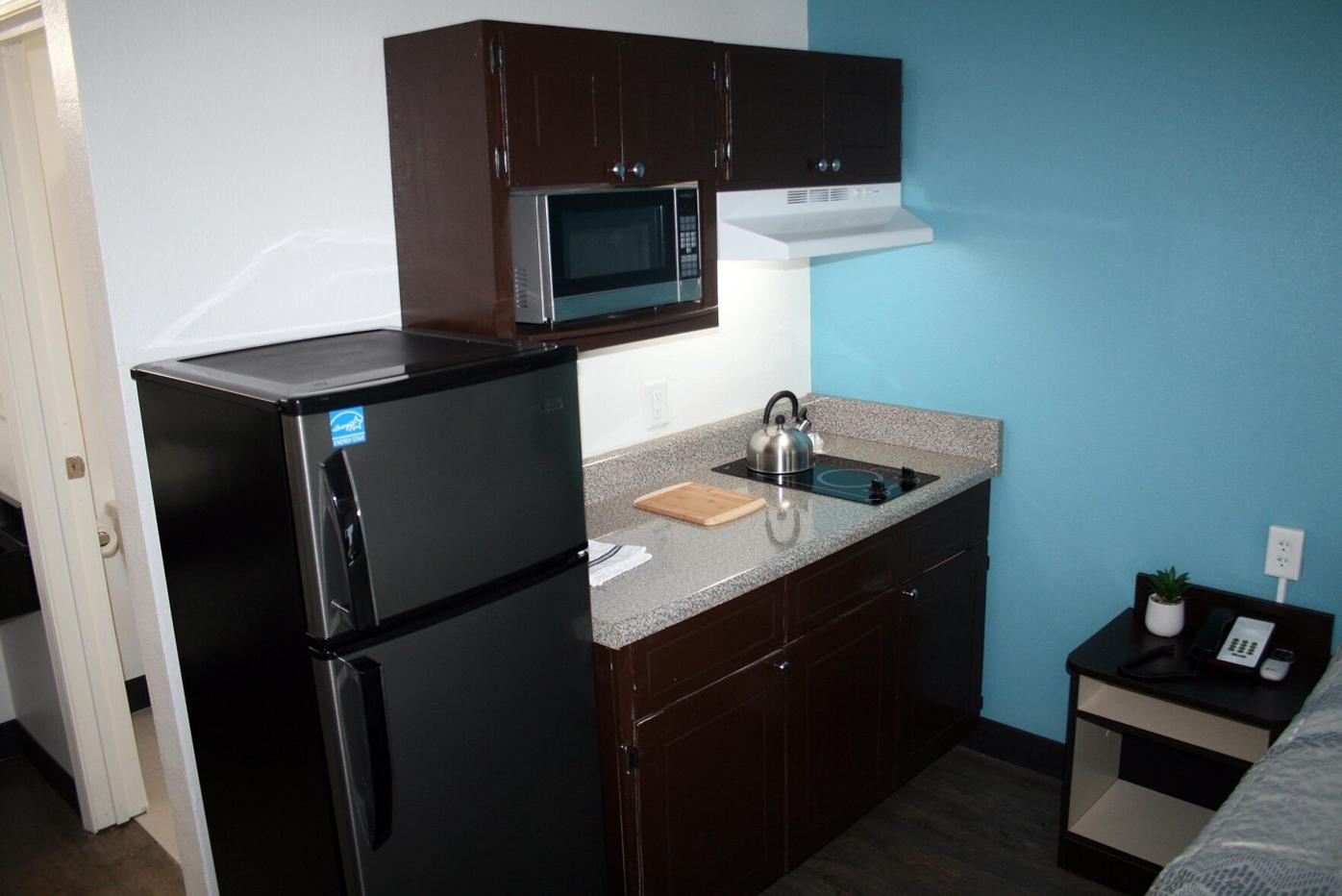 The kitchenette inside a Skytop Studio Loft apartment comes with a refrigerator, microwave and stovetop. The $850 monthly rent also includes utilities. 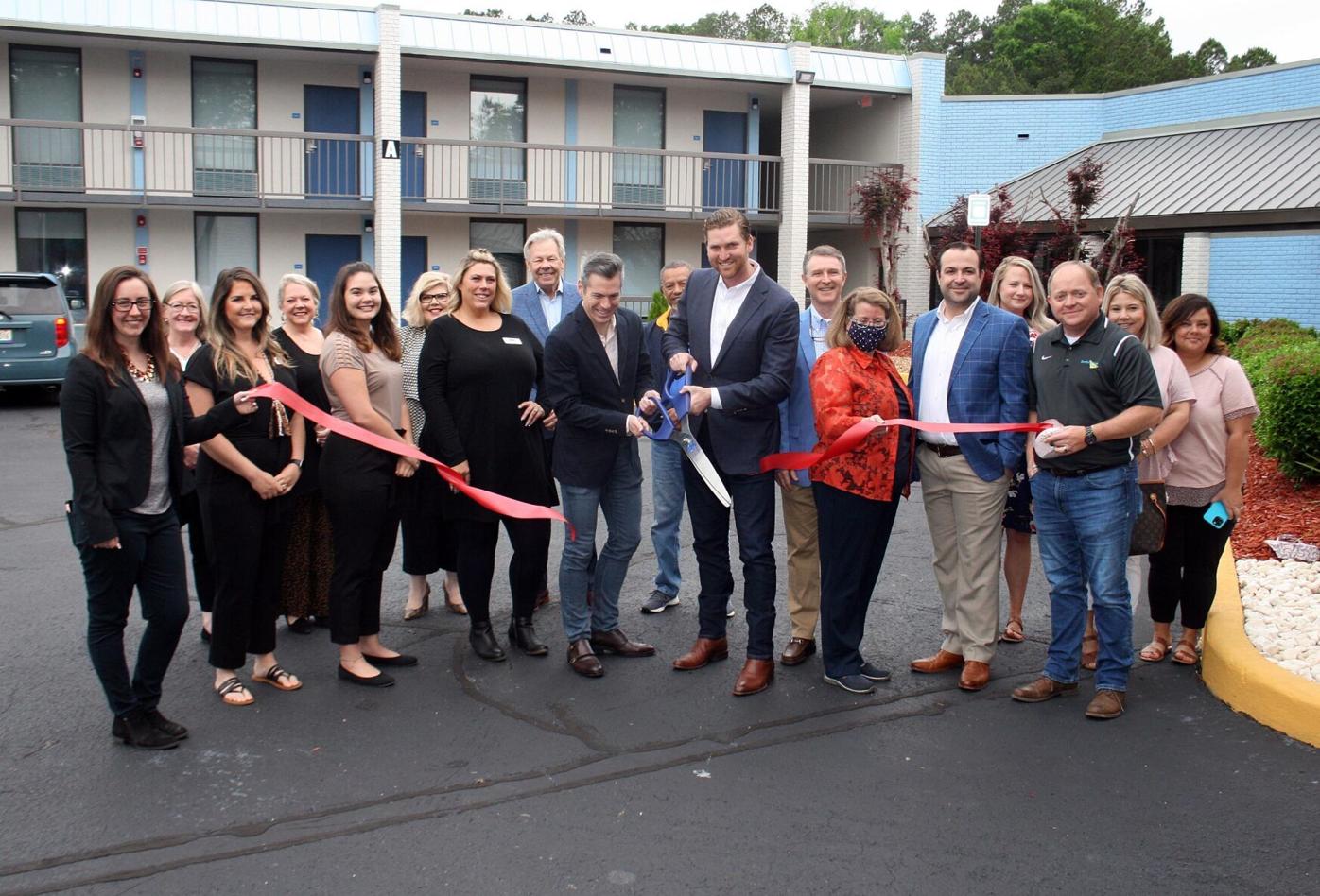 A formal ribbon cutting officially welcomed the Skytop Studio Lofts, off Chateau Drive in East Rome, on Tuesday. The new owners are Ryan Griffin (left with scissors) and Justin Adams, also with scissors. The former Holiday Inn Skytop Hotel has been converted to a 200-unit apartment complex with all rooms furnished. The Skytop Studio Lofts monthly rent includes electricity, water, cable TV and internet service. Some of the units have two beds, some just one. All have a two-burner stove top, microwave and refrigerator.

The kitchenette inside a Skytop Studio Loft apartment comes with a refrigerator, microwave and stovetop. The $850 monthly rent also includes utilities.

A formal ribbon cutting officially welcomed the Skytop Studio Lofts, off Chateau Drive in East Rome, on Tuesday. The new owners are Ryan Griffin (left with scissors) and Justin Adams, also with scissors. The former Holiday Inn Skytop Hotel has been converted to a 200-unit apartment complex with all rooms furnished. The Skytop Studio Lofts monthly rent includes electricity, water, cable TV and internet service. Some of the units have two beds, some just one. All have a two-burner stove top, microwave and refrigerator.

Atlanta developers Justin Adams and Ryan Griffin have partnered with Charles Williams Real Estate in the hopes they can make a dent in the shortage of rental housing in Rome.

Doing business as Fifth Street Capital Partners, they have been renovating older properties into rental units since 2015.

Most recently, they converted the old Holiday Inn Skytop Center off Chateau Drive into 200 loft apartments that offer tenants approximately 400 square feet of living space. The rental price of $850 a month includes electricity, water, cable TV and even internet service.

The apartments are also completely furnished with either one or two beds, a two-burner cooktop stove, refrigerator, microwave, and a large flat screen television.

“One check covers it all,” Griffin said. “The first deal we did ... they really loved the convenience, so we’ve tried to make that our deal with everything.”

The rebirth of what once was Rome’s premier hotel is exciting on several levels, said Missy Kendrick, president of the Rome-Floyd County Development Authority.

“It’s been sitting there empty for a while, so this brings the buildings back into the market,” Kendrick said. “The price point they are at opens it up to so many people. They’ve really taken a lemon and made lemonade.”

City Commissioner Wendy Davis, who is chairing a special committee on the housing crunch in Rome, said the lofts provide a great opportunity to fill a critical gap in the local housing stock.

“Being furnished, with all utilities included, it’s a really good value,” Davis said. “It should be a place where all kinds of people can easily transition into Rome.”

The apartments are also pet friendly. Davis, a dog owner herself, said that allowing pets is going to be “enormously helpful.”

A previous owner of the property actually started the conversion of the hotel rooms into the studio apartments.

Williams said a fire in the roof of one of the units stopped the first group’s plans.

“They ended up doing a Studio Six Motel in the last two buildings,” Williams said. “It stayed that way for about six or seven years.”

“They’re perfect for people who are moving to town and want to take some time to decide if they want to build their own home, decide which side of town they want to live on, or which school district a child may best be suited for,” Krueger said.

Since they’re furnished, folks can leave their own items in storage until they find a final place to land.

Picking up where someone else left off has its downside.

There was a lot of renovation work they might have done differently if they had taken the property right from the start, several of the partners said. As to that, they are making changes slowly.

They got involved in the project last July and were able to hook up with Williams about the best way to deliver the final product. Williams and his brother Gardner Williams made some suggestions that Adams and Griffin incorporated before finishing the renovations.

As they tried to lock in on a price tag for the units, the partners explained that they wanted to offer the best deal in the market.

“We wanted it to be a reasonable package that appealed to the most people,” Griffin said. “It could be young professionals; I’m sure we’ll have some students.”

They said that the Williams brothers helped analyze comparable housing to figure out where the rental rates needed to be.

“We’re not trying to be the top of the market and we don’t want to be at the bottom either,” Adams said. “We want to be able to provide housing for folks that aren’t necessarily trying to get to the nicest property in town, but they want a safe, clean (home) with good amenities.”

The partners are working to get a certificate of occupancy for the old pool, which will be an indoor/outdoor pool for residents. There is also a clubhouse, a laundry facility and a fitness center.

Griffin said they are considering installing some raised bed gardens where residents can grow vegetables.

“We’ve just been thrilled to have an opportunity to rebrand the property,” Williams said. “The timing is just perfect here in Rome because there is such a need for workforce housing.”

That term has been thrown around a lot, he said, but he defines it as people who are earning $40,000 or less a year.

Williams said the one-bedroom rent of $850 a month is closer to a net housing cost of $650, when you consider the utilities and furnishings are included in the price.

“They’re ready to move in, which is fantastic,” Williams said. “A little over 25% of the units, 55 to be precise, have already been leased out, including a few to Rome Braves players.”

Williams also told folks at the ribbon cutting earlier this week that Griffin and Adams are considering the addition of more units by converting some of the old banquet space in the hotel common areas.