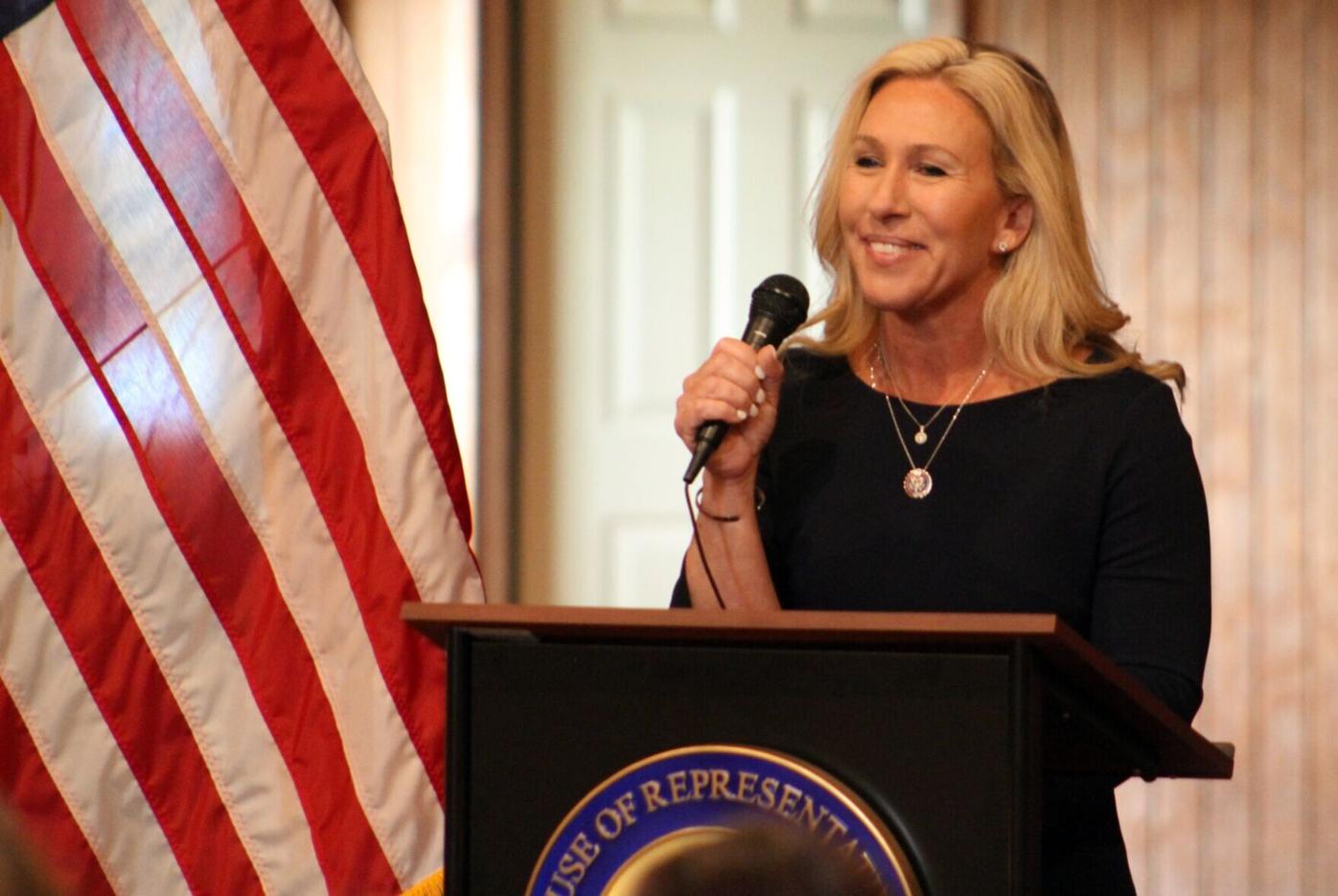 Rep. Marjorie Taylor Greene, R-Ga., speaks to a small crowd of supporters during a town hall at JWR Land and Cattle Co. in Rockmart on Wednesday, May 5. Around 150 people attended the event where Greene spoke about her disappointment in her fellow representatives in Washington, D.C. 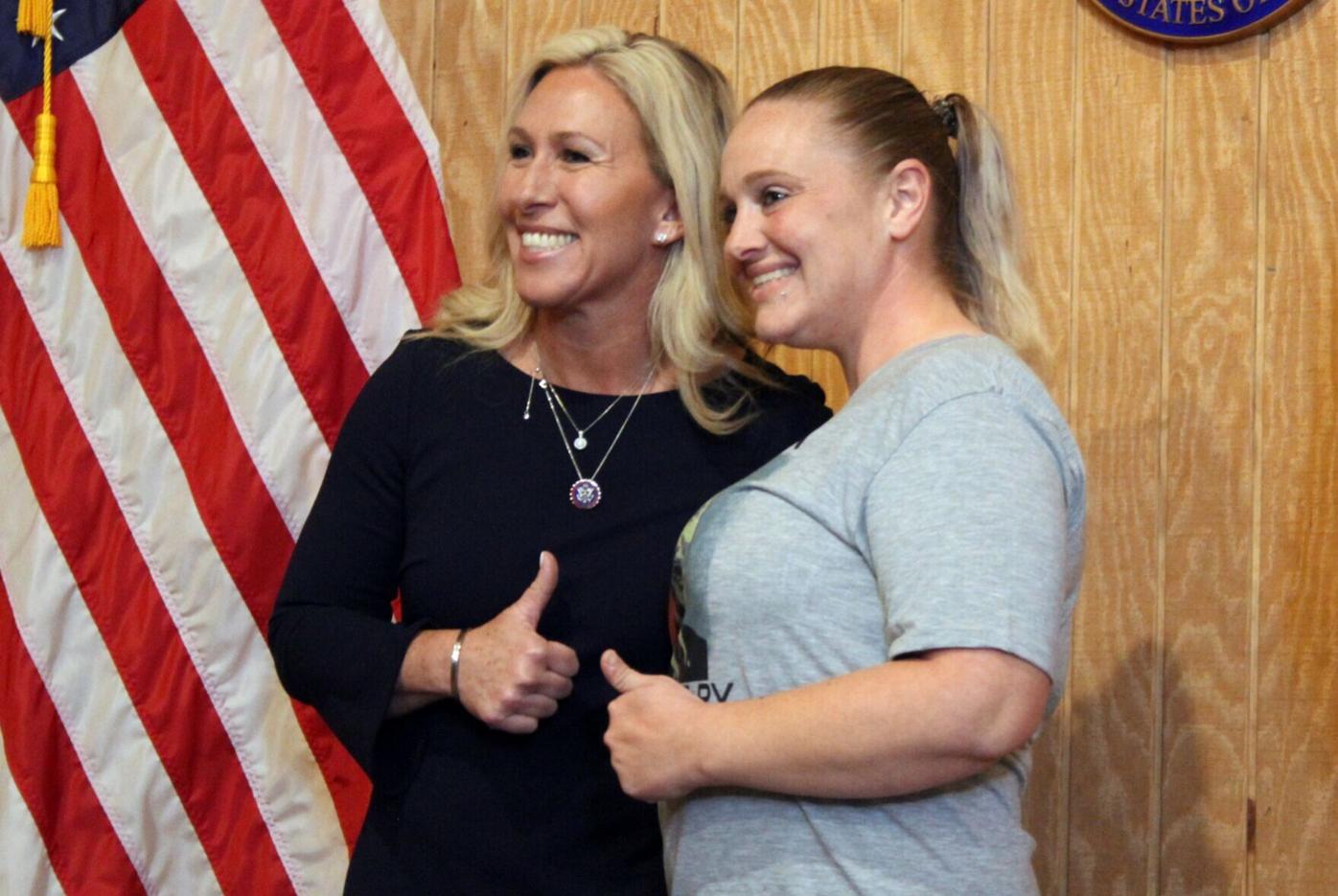 Rep. Marjorie Taylor Greene, R-Ga., speaks to a small crowd of supporters during a town hall at JWR Land and Cattle Co. in Rockmart on Wednesday, May 5. Around 150 people attended the event where Greene spoke about her disappointment in her fellow representatives in Washington, D.C.

Speaking on similar issues raised by former president Donald Trump, U.S. Rep. Marjorie Taylor Greene made a stop in Polk County last week to speak to a group of constituents in the strongly Republican county.

Hosting a town hall at JWR Land and Cattle Co. in Rockmart on Wednesday, May 5, Greene received rousing applause and verbal approval from the crowd of about 150 people, most of which were given access to the event by registering through the congresswoman’s website.

The first-year representative of Georgia’s 14th congressional district spoke about a wide range of topics, from her dismissal from any house committees to her work with the Republican-forged House Freedom Caucus.

Throughout the evening, which lasted just more than an hour, Greene came back to President Joe Biden’s American Jobs Plan and how the $2.7 trillion plan will not only hurt individuals in their pockets, but also in their jobs as part of the pathway to lowering carbon emissions.

“They want to pass these big bills, big spending bills, trillions of dollars, and in these spending bills they want to increase your taxes, and it’s a terrible thing,” Greene said. “You all work so hard every single day for the money that you earn, and you’re already paying your taxes. And then here we’ve got the federal government that wants to run you into deeper debt.”

Greene claimed Biden’s jobs plan is a thinly-veiled attempt at putting in the Green New Deal, an environmental- and energy-focused plan to reduce the country’s carbon footprint. Green said only a small fraction of Biden’s plan would be spent on infrastructure, one of the bullet points of the plan.

“We need to take care of our roads and our bridges and waterways and ports. These are very important things that tax dollars should be spent on,” Greene said. “But I don’t think anywhere in infrastructure does that mean the Green New Deal.”

According to the Committee for a Responsible Federal Budget, the American Jobs Plan is focused on upgrading and repairing America’s physical infrastructure, investing in manufacturing, research and development, and expanding long-term health care services.

To offset the cost of new proposals, the American Jobs Plan includes a number of tax increases on corporations through raising the corporate rate, the minimum tax rate on the foreign income of U.S. corporations, and imposing a new corporate minimum tax, among other changes.

As part of his administration’s broader climate change strategy, President Biden has made investing in electric vehicles a major focus of his jobs and infrastructure proposal.

Greene linked the push for electric vehicles with the supply chain of rare earth minerals used to manufacture batteries for them with China and possibly leading to the loss of jobs in the shipping industry when it comes to tractor trailers.

“I think electrical vehicles are cool, they really are,” Greene said. “But the government has no business forcing industries to move into something that is not part of their natural evolution.”

Jennifer Owens, a lease purchase truck driver from Aragon, spoke up when Greene answered her question about the effect Biden’s plan would have on the jobs of truck drivers in the country.

“I can tell you right now I’ll be voting no,” Greene said. “But everyone should be concerned about this bill. It’s a terrible bill. We shouldn’t be forced into a union or punished because you’re not a member of one.”