The series is based on Janice Y.K. Lee’s novel The Expatriates and is set against the fabric of Hong Kong. It tells the story of an international community whose lives are bound together forever after a sudden family tragedy. Three women stand at the center of the story: Mercy, Margaret, and Hilary. Plus, the star opens up about portraying OCD and tics with sensitivity.

Huston is set to play David Starr, a man who has long lived in the shadow of his impressive wife, Hilary. David is forced to confront who he’s become after his old demons resurface following a catastrophic event in the expat community. Huston joins the previously announced Ji-young Yoo (Sweet Home), who will play the aforementioned Mercy.

“Expats‘ is an exciting reunion for me and Jack, who was the lead in my first feature Posthumous,” said series director Wang, who also serves as showrunner. “Jack is such a thoughtful, empathetic actor and I’m thrilled to have this opportunity to collaborate again.” 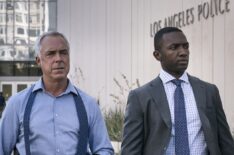 The final season of 'Bosch,' 'Flack,' and more return this month on the streamer.

Expats will be written by Lee, Wang, and Alice Bell, with Wang directing all episodes. Kidman and Per Saari of Blossom Films will executive produce alongside Theresa Park for Per Capita Productions and Dani Melia and Stan Wlodkowski. Amazon Studios will produce.