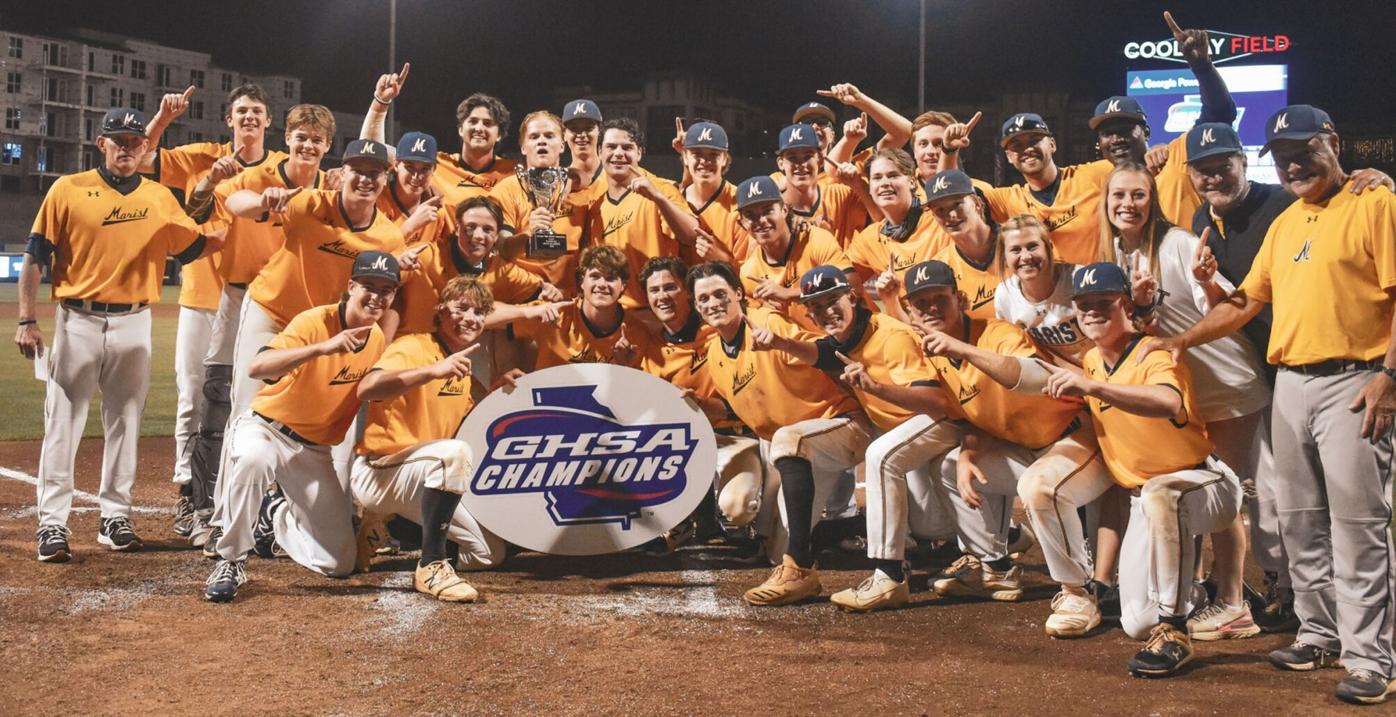 Marist’s baseball team celebrates winning the state Class 4A championship at the GHSA tournament finals May 20 at Coolray Field in Gwinnett County.

In traditional dog-pile fashion, Marist’s baseball team celebrates winning the state Class 4A championship at the GHSA tournament finals May 20 at Coolray Field in Gwinnett County.

Marist’s baseball team celebrates winning the state Class 4A championship at the GHSA tournament finals May 20 at Coolray Field in Gwinnett County.

In traditional dog-pile fashion, Marist’s baseball team celebrates winning the state Class 4A championship at the GHSA tournament finals May 20 at Coolray Field in Gwinnett County.

This article was updated May 29 at 5:01 p.m. with Marist team photos and coach Mike Strickland's quote added.

One local team – Marist – brought home a title from and two other squads – Lovett and Wesleyan – placed second the Georgia High School Association (GHSA)’s state baseball championships May 20 through 26 at Truist Park in Cobb County, Coolray Field in Gwinnett County and Grayson Stadium in Chatham County. The finals wrapped up tournaments that started April 29 and included best-of-three series in each round.

In Class 4A, Marist captured the championship by beating Benedictine (2-0) in the finals. The War Eagles advanced with wins over Central of Carrollton (2-0), Jefferson (2-0), West Laurens (2-1) and Bainbridge (2-0) in the first four rounds.

“I would say the high value all of the parts of our program placed on the time we got to spend together,” Marist coach Mike Strickland said. “After losing last spring (having the season cut short due to the COVID-19 pandemic) the way we did, I feel that we recognized how fortunate we were to be together at Marist and have an opportunity to pursue our passion of baseball with one another.”

In Class 7A, Parkview won the title. Campbell lost to North Cobb (2-1) and Milton lost to Mill Creek (2-0) in the first round.

In Class 6A, Houston County took home the crown. North Atlanta lost to Valdosta (2-0), Riverwood fell to Pope (2-1) and Cambridge lost to eventual runner-up Lassiter (2-0) in the first round.

In Class 5A, Starr’s Mill captured the championship. St. Pius X fell to Loganville (2-1) in the semifinals, and the Lions advanced with wins over Eastside (2-1), Blessed Trinity (2-1) and Wayne County (2-0) in the first three rounds.

In Class 3A, Westminster lost to eventual runner-up Franklin County (2-0) in the first round, and North Hall won the title.

In Class A Public, Metter won the title.

The game between the host New York Mets and Atlanta Braves was postponed Friday due to inclement weather.