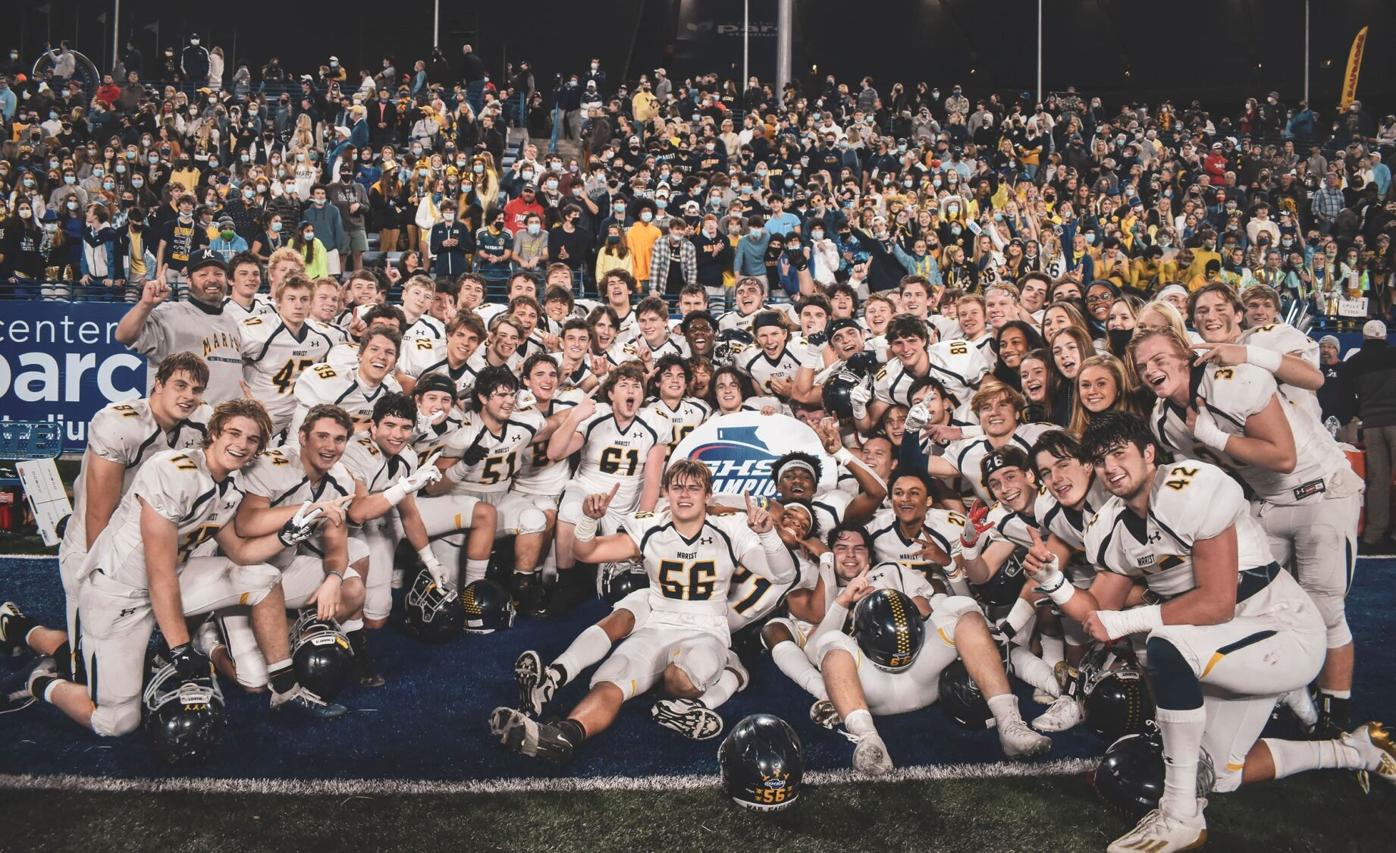 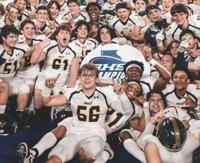 Marist’s players celebrate with their students and fans after winning the 2020 GHSA Class 4A state title at Center Parc Credit Union Stadium in Atlanta. 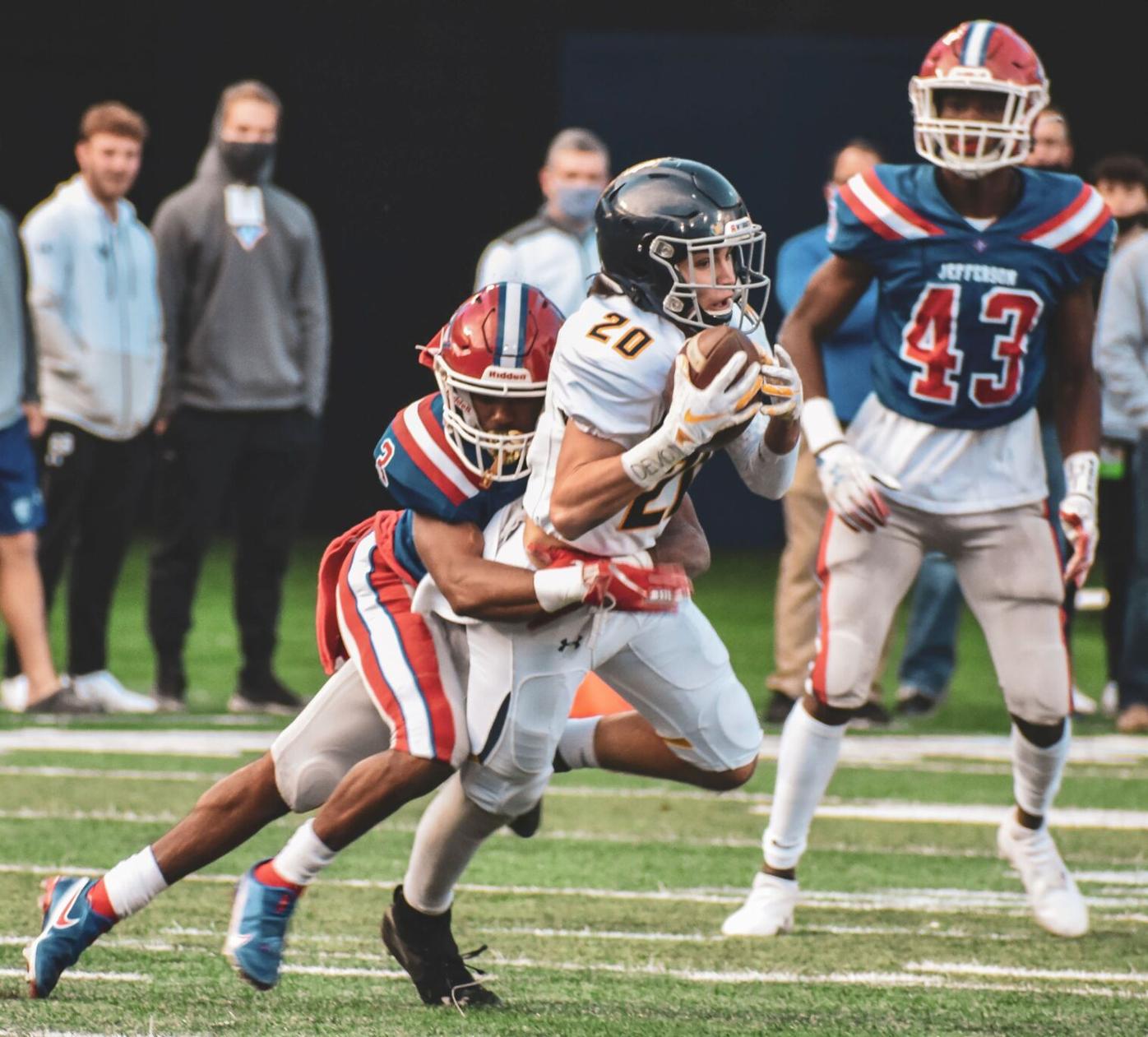 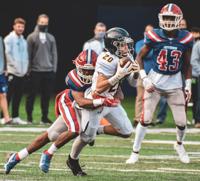 Marist’s players celebrate with their students and fans after winning the 2020 GHSA Class 4A state title at Center Parc Credit Union Stadium in Atlanta.

During the post-game interview with Georgia Public Broadcasting, War Eagles head coach Alan Chadwick said this year’s championship was “almost as special as those other two.”

“This is really great,” he said. “This is a group we knew would be a pretty good group all the way through the senior class. They’ve done everything we’ve asked them to do. They gave great effort. Our coaching staff, their work ethic, their hard work and commitment and dedication to helping these kids be successful (are) truly outstanding. I’m really blessed to have great staff and great players that give us all they’ve got.”

It was the first meeting between Marist and Jefferson ever and the only GHSA title game where both teams were undefeated entering the contest. Marist had two regular-season games cancelled because of the pandemic.

Chadwick improved to 3-4 all-time in the state finals with the win, which was the 399th of his career. This year’s title was won with defense as Marist held opponents to an average of only 3.7 points per game.

“No question we had a good defense,” Chadwick said. “We knew we were going to be pretty good there with eight seniors coming back, eight starters coming back. (Defensive coordinator Jef) Euart and his staff (assistant coaches John Embry, Gary Miller and Danny Stevens) did a remarkable job with putting them in the right positions and playing hard and being physical.”

In a Jan. 3 interview with the Neighbor, Chadwick said, “You couple that with the fact that we’re very diverse on defense with different fronts and slants and twists and coverages and disguising coverages. You’re able to do that when you have the experience we did. That plus team speed.”

Marist’s Charlie Fleming was named the player of the game for averaging 46 yards per punt to pin Jefferson deep in its own territory several times and for getting a safety, which put the War Eagles ahead for good 16-14 in the third quarter. With 7:06 left, Fleming tackled Jefferson RB Kam Robinson in the end zone.

The War Eagles widened the lead to 23-14 on a 6-yard run by HB Ian Otten with 10:58 left in the game. The score was set up five plays earlier when Robinson fumbled the ball at the 10-yard line and Marist LB Tyler Hare recovered it and returned it to the 1-yard line with 11:54 remaining.

In the first half, Marist jumped out to a 14-0 lead before Jefferson rallied. The Dragons started their comeback with a 9-yard run by Jordan Perry with 11:22 left in the second quarter to make it 14-7. It was the first TD scored against Marist’s first team defense all year.

On Marist’s ensuing possession, Otten fumbled a pitch from QB Champ Davis at the War Eagles’ 40-yard-line and Jefferson’s Robinson recovered it at the 28-yard line. But the Dragons could not get points out of the drive.

Late in the first half, Jefferson was driving for a possible go-ahead score, but Marist S Josh Moore intercepted a pass from QB Malaki Starks at the 9-yard line with 36 seconds left.

Marist held Jefferson to 182 yards rushing and 27 yards passing. Starks, a junior and top college prospect, ran 30 times for 321 yards and four touchdowns, threw a TD pass and had a game-clinching interception in a 42-35 win over Benedictine in the state semifinals. But he had only 90 yards of total offense against the War Eagles.

“To hold him to 63 yards rushing tells most of the story there,” Chadwick said.

In addition to having eight starters back on defense, the fact the War Eagles had eight also returning on offense made Chadwick confident about the season, he said. But playing amid a pandemic was tough.

“It’s extremely satisfying,” Chadwick said of winning the state crown in a year marked by COVID-19. “The mental grind of not knowing you had a game or practice that particularly week was very stressful, probably more so for the coaches. The uncertainty of whether you are going to have a season compounded that stressfulness. Then to make it through to the end and pull off a state championship, it’s especially gratifying.”

Marist School held a Sept. 13 blessing and ribbon-cutting ceremony for the expansion of the Wooldridge Center, which includes the new Goizueta…