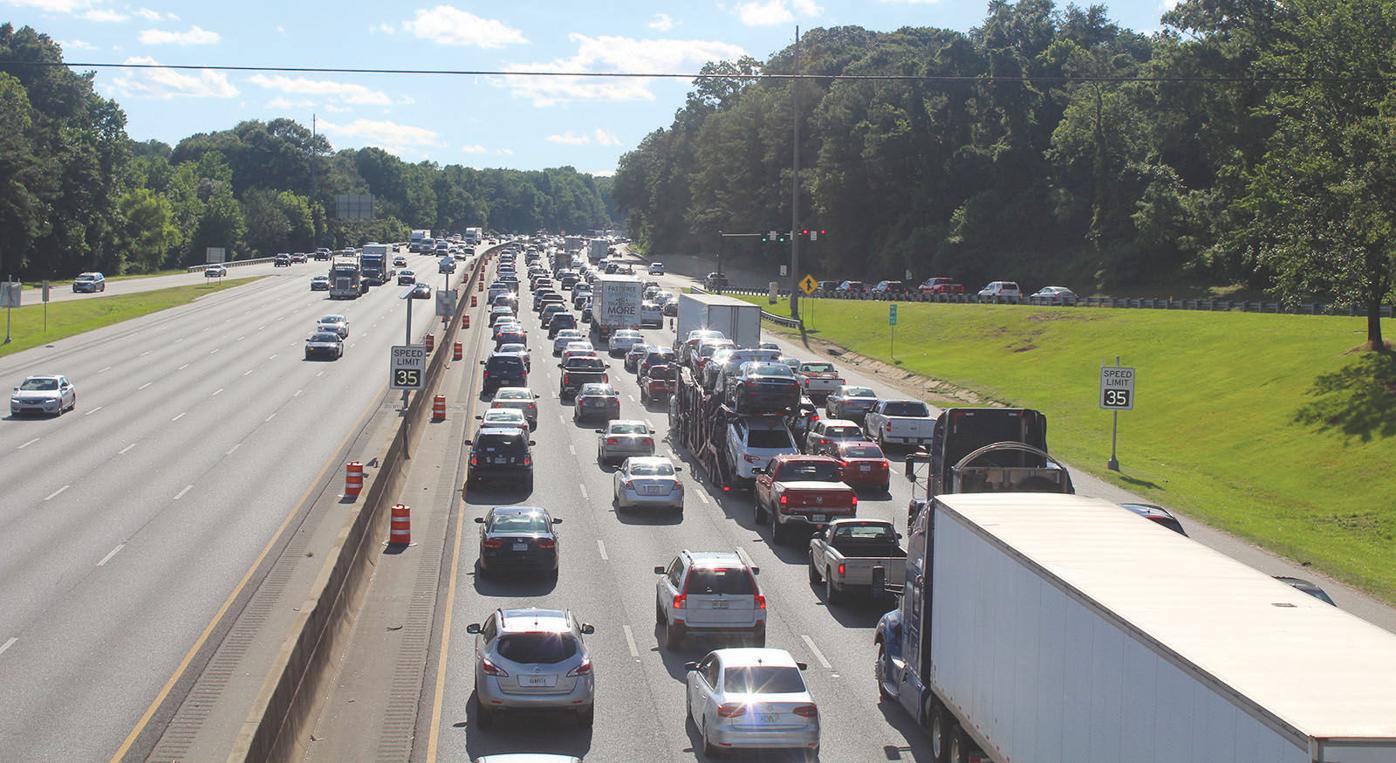 Traffic moves slowly in the westbound lanes of Interstate 285, right, but fast in the eastbound lanes, left, near Roswell Road in Sandy Springs during the afternoon rush hour. 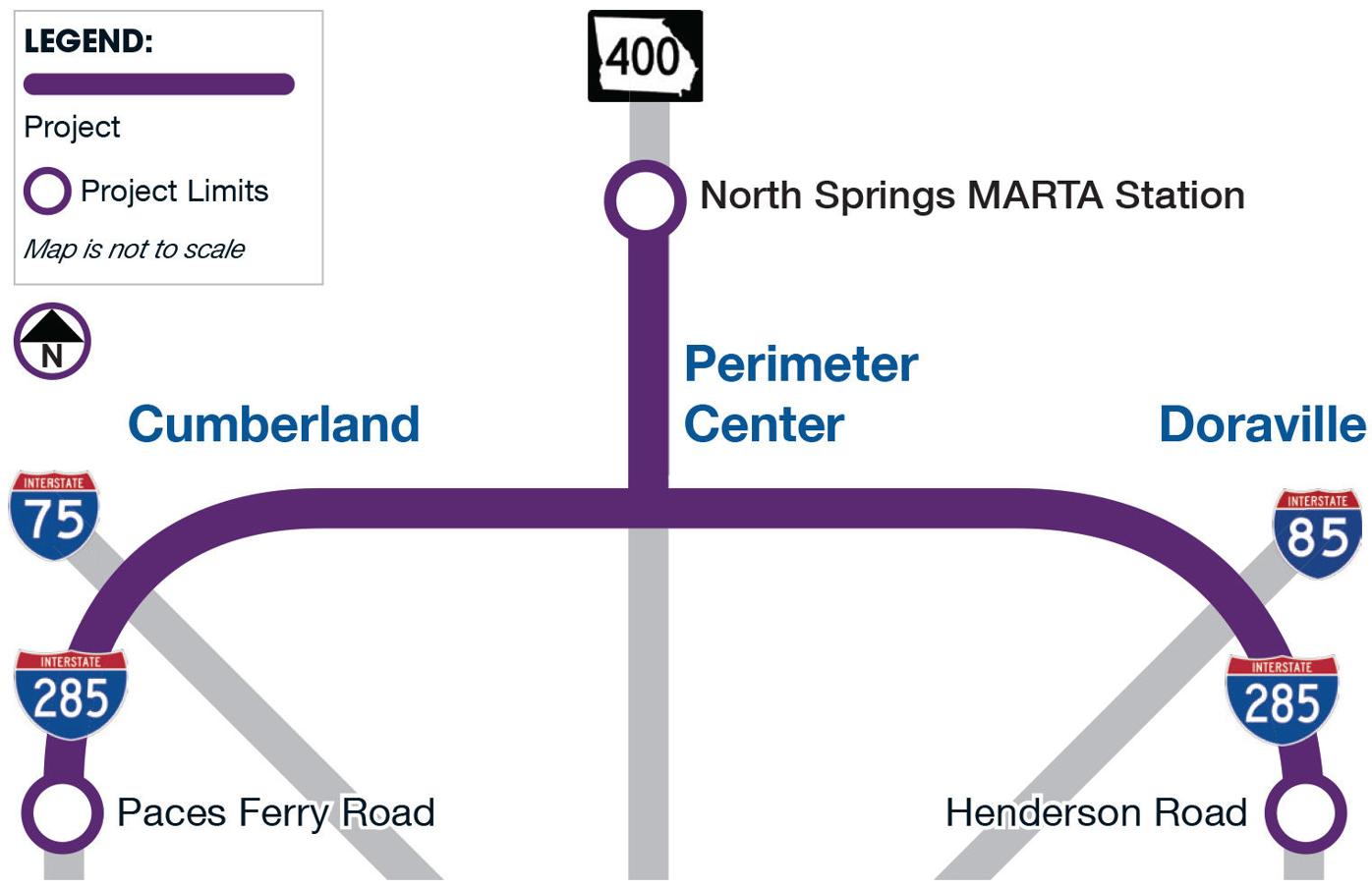 This map, provided by the Georgia Department of Transportation, shows where the proposed express lanes will be on the top end of Interstate 285.

Traffic moves slowly in the westbound lanes of Interstate 285, right, but fast in the eastbound lanes, left, near Roswell Road in Sandy Springs during the afternoon rush hour.

This map, provided by the Georgia Department of Transportation, shows where the proposed express lanes will be on the top end of Interstate 285.

This article was updated Jan. 28 at 6:36 p.m. with corrected and additional information on which bridges the Georgia Department of Transportation plans to rebuild as part of the Interstate 285 top end express lanes project.

Thanks to some design tweaks, the Georgia Department of Transportation (GDOT)’s proposed Interstate 285 top end express lanes project will impact only about 275 properties instead of the about 375 ones in its original path due to right-of-way acquisition.

“We started with over 300 and we’ve reduced that by over 100,” said Tim Matthews, GDOT’s major mobility investment program manager. “In some areas we’re not touching anybody. … We were able to remove 100-and-something parcels from the project by going aerial (with the lanes).”

Matthews gave an update on the project at the Sandy Springs City Council’s annual retreat at City Springs Jan. 24, one day after GDOT hosted two public information open house meetings there. It was one of seven such meetings the state was hosting in Cobb, DeKalb and Fulton counties Jan. 21 through 30 to give residents an opportunity to see the project’s design and give feedback on it. Through Feb. 25, residents can also voice their opinions on the project by visiting https://bit.ly/2Rw0sZ2.

It also includes express lanes north on Georgia 400 from 285 to the North Springs MARTA station, where it will connect to express lanes that go all the way into Forsyth County.

The 285 express lanes will cost at least $5 billion to build and, due to the price and size, will be split into two parts, with the east one expected to open in 2029 and the west one in 2032.

Scott Higley, a GDOT spokesman, said the project will potentially displace only about 30 property owners out of the 275, with the rest only partially impacted. He added that some design concepts could be changed depending on input from affected residents.

One man attending the meeting asked Matthews, “How many property owners will need to be talked to and negotiated with? … What did you learn from that 400 (express lanes project) experience?”

Matthews said, “Generally, you don’t have to do a lot of dedicated outreach and 99% of the time, we would wait until we had the meetings where their homes were identified with red dots (as being impacted).”

Matthews added that as with the 400 project, prior to those meetings, GDOT reached out to a cluster of homeowners in an area that was affected more than others. For the 285 project, the state contacted several homeowners in the Chateau Club in Dunwoody.

Matthews said GDOT has spoken not only to residents whose properties touch part of the project’s path but also those whose homes will be affected by the noise caused by the new express lanes. He said concrete noise barriers could be built, relocated or even raised in those areas, depending on what a noise analysis requires.

But the design changes to the project also mean four bridges – Mount Vernon Highway and Johnson Ferry Road over 400, Chamblee Dunwoody Road over 285 and Northcrest Drive over I-85 – must be torn down and rebuilt to accommodate express lanes going under them. A fifth bridge, Henderson Road over 285, is being rebuilt as part of GDOT’s separate eastside express lanes project in DeKalb.

The temporary closure of one of those bridges, on Mount Vernon, will cause a traffic nightmare, Sandy Springs Mayor Rusty Paul said.

“If they close that bridge for any period of time, it would be catastrophic. It’s one of only three east-west corridors in the city,” Paul said in an interview after the retreat. “If that bridge were out for any length of time, on a local level, it would be the equivalent of the (I-)85 bridge catching fire (and collapsing in 2017).”

Matthews said the process to replace the Mount Vernon bridge could be a few days to six months, depending on how it’s done. He mentioned a bridge in northwest Georgia near the Tennessee line that was replaced within a few days by using a prefabricated bridge.

“They closed it on Friday and had it open on Monday,” Matthews said. “So, it can be done. We hope we can do that here.”

Paul said he hopes either the bridge can be replaced within days or it will be spared by moving the express lanes over it. He added that the lane closures coming with GDOT’s plans to resurface 400 in Buckhead and Sandy Springs starting in March, something Matthews also announced at the retreat, will only exacerbate an already high-traffic area.

For more information on the project, visit majormobilityga.com/projects/topend. To view the video visualization, visit www.youtube.com/watch?v=WyHoyGsn9FQ.

The Ga. 400/Holcomb Bridge Road Interchange and Express Lane bridges' will receive aesthetic improvements, including new medians and a trail.

The Sandy Springs Recreation and Parks Department will host a series of events and classes this winter. They include:

I-285 lanes closed this weekend

Motorists are reminded to avoid Interstate 285 in Cobb and Fulton counties over the weekend, or risk travel delays as a result of lane closure…

A gas main break that occurred Feb. 3 at about 2:30 p.m. on a busy Sandy Springs road, shutting down all lanes of traffic, has reopened.

Drivers tired of riding over potholes and rugged pavement on Georgia 400 in Buckhead and Sandy Springs can rejoice.

A sit down discussion with Gov. Brian Kemp

The pros and cons of annexation: Celanese, Honeysuckle Ridge and Horseleg Estates eyed by the city