The future use of the Atlanta City Detention Center has been up for debate for several years.

Pictured is a rendering of what the lobby of the Center for Equity, formerly the Atlanta City Detention Center, would look like once complete. It is one of four possible design concepts for the center.

Pictured is a rendering of what the front of the Center for Equity, formerly the Atlanta City Detention Center, would look like once complete. It is one of four possible design concepts for the center. 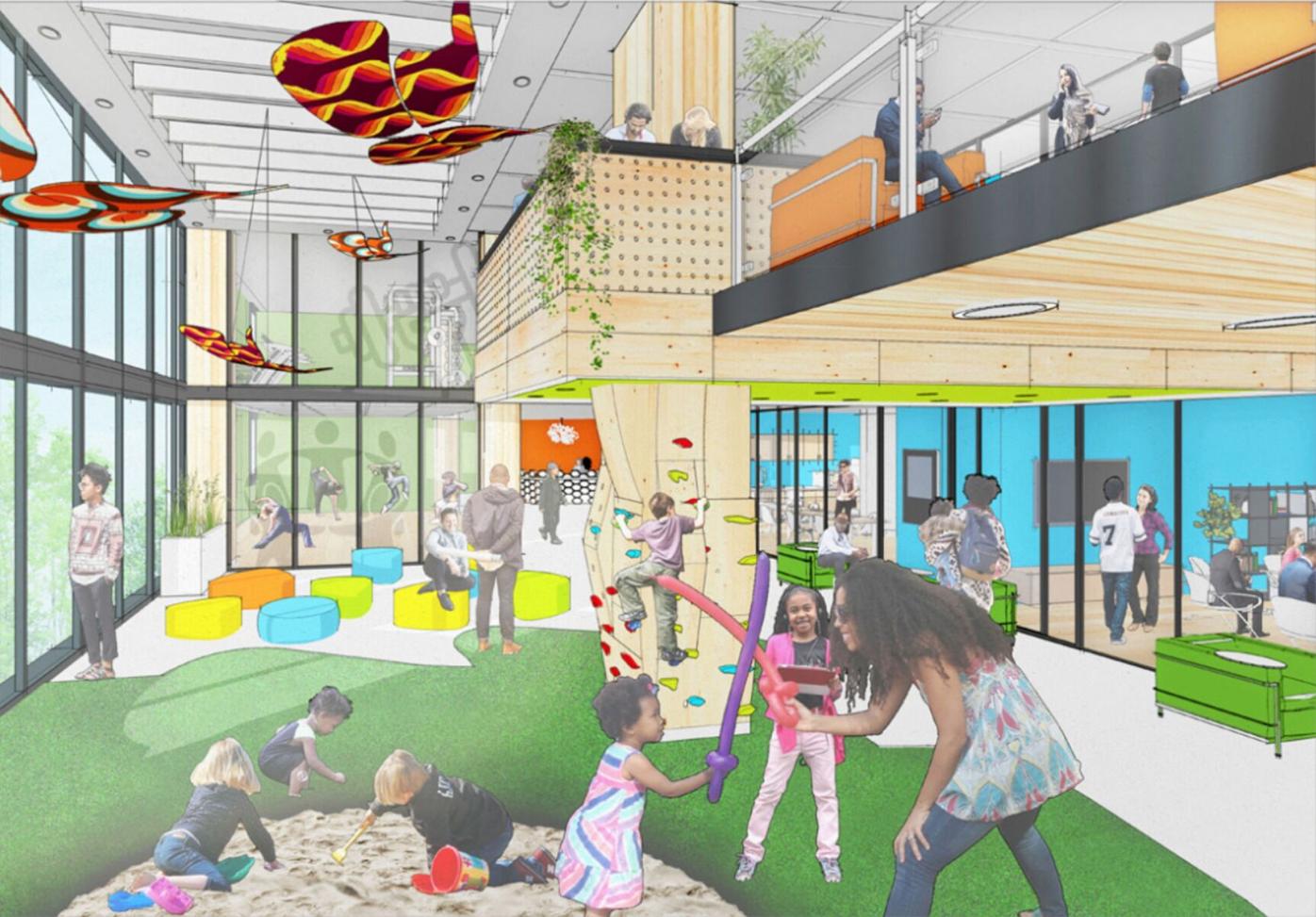 Pictured is a rendering of what the indoor community space in the Center for Equity, formerly the Atlanta City Detention Center, would look like once complete. It is one of four possible design concepts for the center.

When new Fulton County Sheriff Patrick “Pat” Labat took office Jan. 1, one of the first things he did was announce his interest in the county buying the Atlanta City Detention Center from the city.

“The correctional system is an integral component of the criminal justice system,” he said in a Jan. 4 news release. “We have an exceptional opportunity to bridge the gap between restorative justice and social change in public safety. However, to ensure we are successful, conditions at the Fulton County Jail must be overhauled including vital physical expansion which ACDC provides.”

Labat’s proposal represents another moment in the years-long debate over what should be done with the center, which today houses only a fraction of the number of inmates it used to hold.

In September 2018, Mayor Keisha Lance Bottoms signed an executive order to end the decades-long contract the city had with U.S. Immigration and Customs Enforcement and transfer all remaining immigrant inmates out of the center.

The order also states the city received a $150,000 grant from private foundations to create design concepts for the center’s future use. Designing Justice + Designing Spaces, an Oakland, California-based architectural and real estate development firm, was hired to formulate the design concepts.

In May 2019, the Atlanta City Council approved a resolution on behalf of Bottoms to establish a task force to examine how to repurpose the center into a holistic community facility.

The task force includes representatives of both local government agencies and individuals picked from nominations submitted by the public, including those who were detained at the center. Labat, a law enforcement veteran who spent 10 years at the center as the Atlanta Department of Corrections’ chief until retiring in 2019, is one of its members.

There have been five task force meetings since 2019, with four from July through December 2019 and a fifth two months later. The sixth meeting was postponed due to the COVID-19 pandemic. From those meetings, four design concepts have been chosen.

Julia Perry, a spokeswoman for the firm, said the process was “the first of its kind in the United States, which helped local residents provide direct input on how the former jail could be repurposed to benefit the community and address its harmful effects.”

“…Residents used custom-made board games, building blocks and other tools developed by DJDS to spark a dialogue among community members impacted by the jail, while educating participants in the basics of design, financing and real estate development,” she added. “… According to DJDS co-founder Deanna Van Buren, this creative and liberating process can serve as a model for other cities as the move to decarceration leads to closures of detention facilities nationwide.”

District 7 Councilman Howard Shook, who represents part of Buckhead, has been in favor of turning the center into a county jail property since he first took office in January 2002.

“I have always said that Fulton County ought to run that jail,” he said. “Jailing felons is a classic county (job) and not a municipal responsibility. I’ve been having this argument first with Mayor (Shirley) Franklin and it’s continued ever since. The response is, ‘Well, that sounds good, but we can’t agree on a price.’ How about we just leave the keys on top of the mat and just walk away? People forget that both the county and the city tend to gouge the taxpayers.”

Shook said the council is divided on who’s in favor of keeping the center as a jail versus redeveloping it. But with a recent increase in crime – the city had 157 reported murders in 2020, the most in 22 years – and the county jail overflowing with inmates so much that female prisoners are being housed in a south jail annex in Union City, some council members who have been in favor of revamping the center could switch their votes.

“Before the pandemic broke out with all the crime and violence, I felt pretty confident that a super majority looked forward to repurposing the jail,” Shook said. “It’s entirely possibly now some council members could change their minds about it. I know I have asked the mayor’s administration to reconsider the decision. But I think they still (moving forward).”

Labat said the county’s acquisition of the center would allow Fulton to “safely and humanely” house all prisoners in the jail and center combined, adding it would save taxpayers money because Fulton could house all its prisoners without paying other municipalities to do so.

Email messages sent to Bottoms’ office seeking comment on the center and its future were not returned by the Neighbor’s deadline.

With new Fulton County elected officials being sworn in either in late December or early January, incoming politicians interviewed by the Neig…

As more individuals have become eligible to receive the COVID-19 vaccine and have requested it, the demand has overwhelmed Fulton County’s web…

Fulton County’s recent rise in COVID-19 cases continues to raise concerns for its officials and others.

J.P. Matzigkeit has decided to serve only one term as the Atlanta City Council’s District 8 representative.

Starting next month, the city of Atlanta plans to begin a phased approach to decriminalize some offenses in an effort to improve its justice system.

Mayor Keisha Lance Bottoms wants to close the Atlanta City Detention Center and transform it into the Center for Equity.